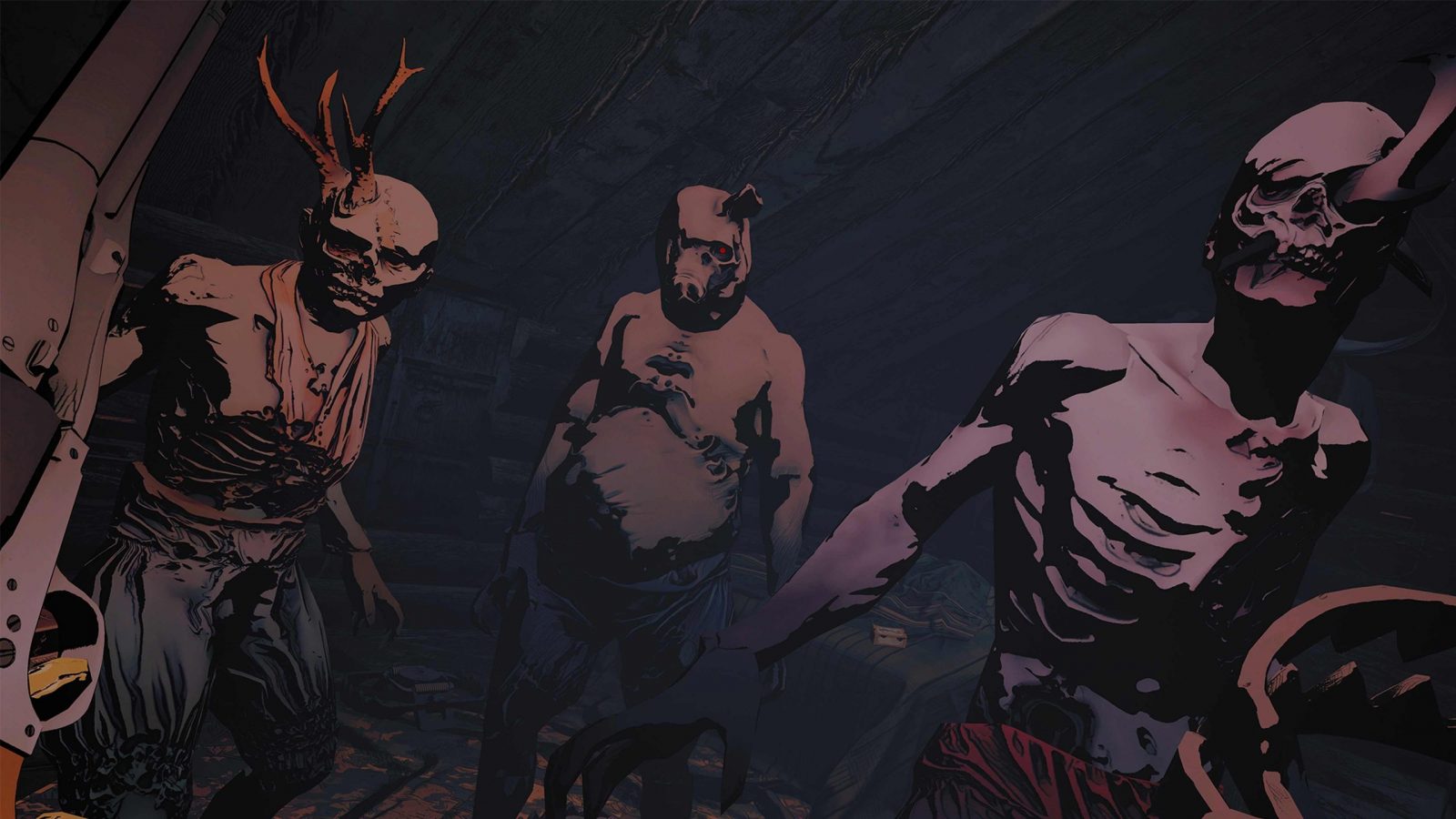 I’ll say it right now, I hate VR horror. It’s just way too intense, and I can barely focus on my task because of how stressed out I am. It’s a completely different feeling from playing a title like Outlast or Blair Witch because they’re only on a 2D screen. So for some reason, I decided to put my hand up to review the VR survival horror Lies Beneath, and I have to say I’m so glad I did. It’s one of those horror games that are so hard to put down, which is partly due to its cleverly structured mechanics and mostly due to it being so clever and interesting. Drifter Entertainment has come from previous successful titles like Gunheart, and this one isn’t lacking either.

Let’s start at the beginning. It’s quite clear from the get-go that you’ll be doing plenty of reading since the first instance of the game involves you reading a prologue from a graphic novel. In it, your father tries explaining why a lighter he’s given to you is so important, but as he’s doing so a mysterious figure steps in front of your car. You swerve, but the car veers off the side of the road. As you awaken, your father is nowhere to be seen, and there’s a blood trail leading off into a cave. Above, you see the same mysterious figure, staring at you before it disappears from sight. From here, all you’ve got is that lighter your father spoke about, and nothing else. So, you head into that cave, flicking your lighter on to be able to see your surroundings. Here, the embers from the lighter’s flame will light the direction you’re supposed to go, and as you fumble through the cave you’ll stumble onto a hospital room. A single, lowly figure stands in front of a machine, and as you pass a concrete pillar he’s out of sight. In his place, a red doll hovers. The in-game text (in a comic book style) tells you to burn it. And you do so. Afterwards, your lighter will go out, and once again you succumb to the darkness. Flick that lighter on, and AHH! Jumpscare. Though those ones are my least favorite, and I knew it was coming, it still got me. After that, you’re in the wild. A cold frontier lays ahead, and you’re meant to keep going. 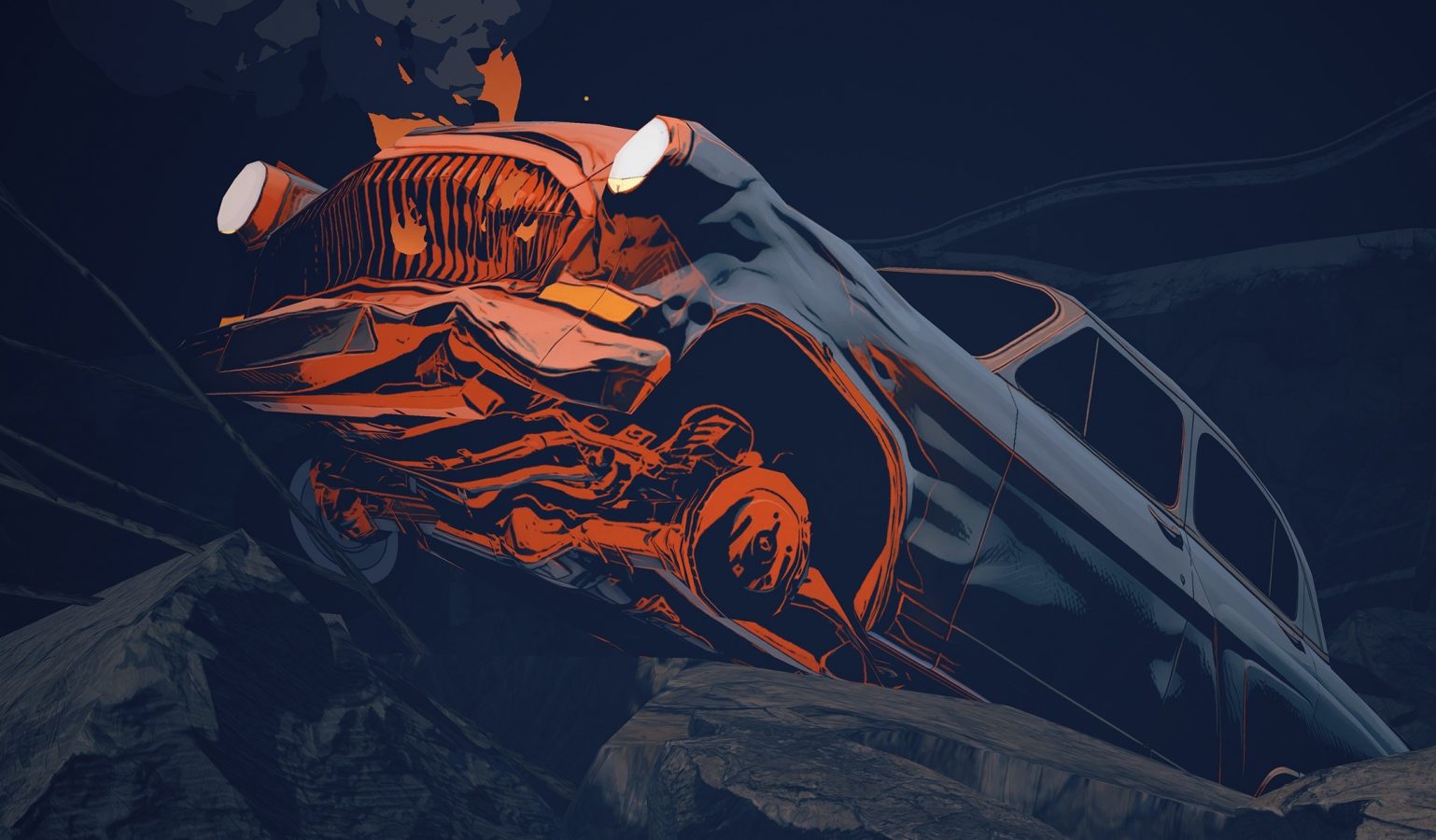 Waking up to your car wreckage and a lone stranger.

And once you do, you’ll get a chance to test out the gameplay elements. There’s a variety of weapons that are unlocked as you progress through the story, ranging from sharpened sticks to machetes, to handguns and shotguns. Firearms will alert enemies to you, so at the start of each battle, you may opt to go for a melee weapon to get a kill in before things go haywire. Finding resources is also not too much hassle since there are so many containers and crates to be found in each chapter (I’ll get to this later). You’ll take damage pretty easily in each battle unless you’re an ace shot or manage to swiftly kill your enemies with your sharpened stick, but you’ll just need to eat food you find to heal yourself up. A nice added feature is flicking the lighter on and drawing your gun, which will cause your firearm to have an added laser sight, making your shots significantly easier to hit. There’s no save selection screen in the menu, so you’ll have to rely on eventually coming up to and lighting a campfire or fireplace to save your game. Those only come once or twice a level, and are usually in the middle and end of a chapter. Checkpoints, on the other hand, are activated when you light a lantern, and since you’ll die effectively all the time it’s good to always keep an eye out for them. They’re not hard to miss since they’re a distinct red color, but in the heat of the moment, you may miss them as much as I do. And like when lighting that red doll, the story is delivered through comic book-style text boxes. At points, these get pretty cheesy or redundant and can feel like a stop sign to slow down the player instead of letting them sprint through a zone.

The gameplay elements are fun, but nothing we haven’t seen before. At times, they also get a bit too video-gamey, and what I mean by that is you can always tell when it’s about to hit the fan when you’re given a bucket load of health and ammunition. For that reason, and even though it’s marketed as a survival game, the resource management side isn’t really there either. At the start you might say “damn, I gotta ration my resources and not take too many shots”, but a couple of chapters in you’ll notice that’s not really true. It’s easy to find ammunition, and even if you don’t have that you’ll almost always have a melee weapon on hand. While that’s not a big issue, it is a VR survival horror title, making it a bit too accessible even on the higher difficulties. 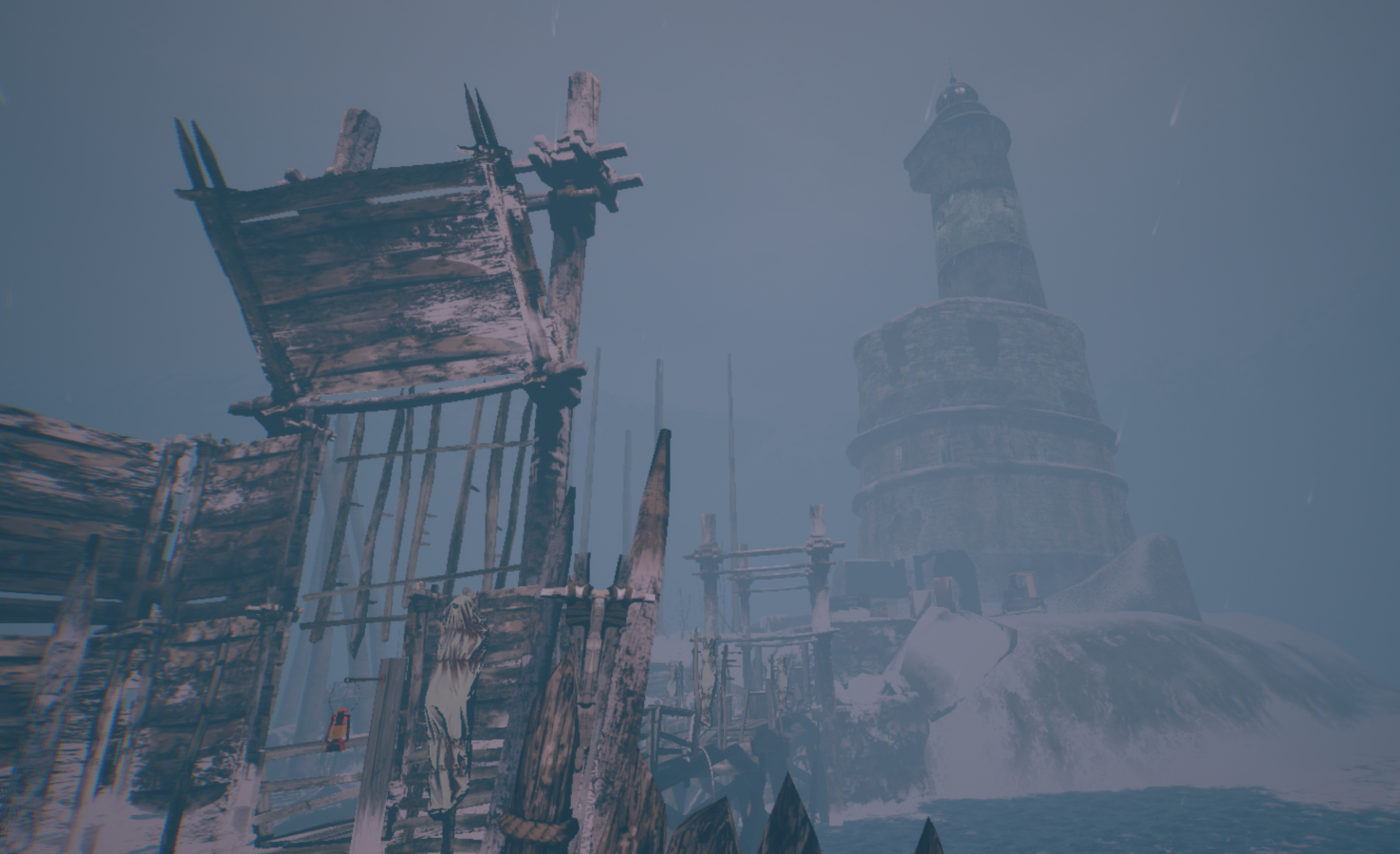 Checkpoint reached! And also here’s a ton of ammo and health.

I also found it was way too easy to kill enemies with melee weapons. Basic enemies take 3 or 4 hits to kill, but with some rapid hand movements, that’s only a second or two spent. What I mean is that since there’s no VR-style weight added to weapons, you can take the longest melee weapon and flick it a bunch of times in front of you to kill them. The game does try to cleverly overcome this issue by having your melee weapons get caught in your enemies body, but you can easily retrieve the weapon from them and repeat the process. I did my best to avoid doing that to enjoy the game more and play it as it was meant to be played, but for others, it may make the game significantly less tense and scary, and thus less interesting.

But, that’s enough of all those gripey, little details. The part that really sells the title is the atmosphere. This is in part due to the sound design, which I’ve gotta say is nothing below fantastic. Take, for example, at the very beginning of the game, where you have to run away from one of the monsters because you’ve got no weapons. Playing on 7.1 surround sound, or stereo headphones, it’ll sound as if he’s exactly right behind you. And since you can’t look behind you without slowing your pace, that feeling of franticness is what keeps you going forward. Never has a horror title made me feel so stressed being chased before, and in VR it’s abundantly more terrifying. Hats off to Drifter Entertainment for that one. The other part of the atmosphere comes from its cel-shaded art style, making you feel as if you’ve stepped into a graphic novel. Partly for that reason, the game can hide all the level loading elements because it’s not at all resource-demanding, allowing for your playthroughs to continue smoothly and have you always in the action. The other reason for the style choice is that the game feels significantly more nerve-wracking because it’s so dull-coloured. When you come across a monster rearing to attack, it’s more nerve-wracking because they seem so evil and hateful. It’s a weird thing to experience, but it’s perfect for VR. 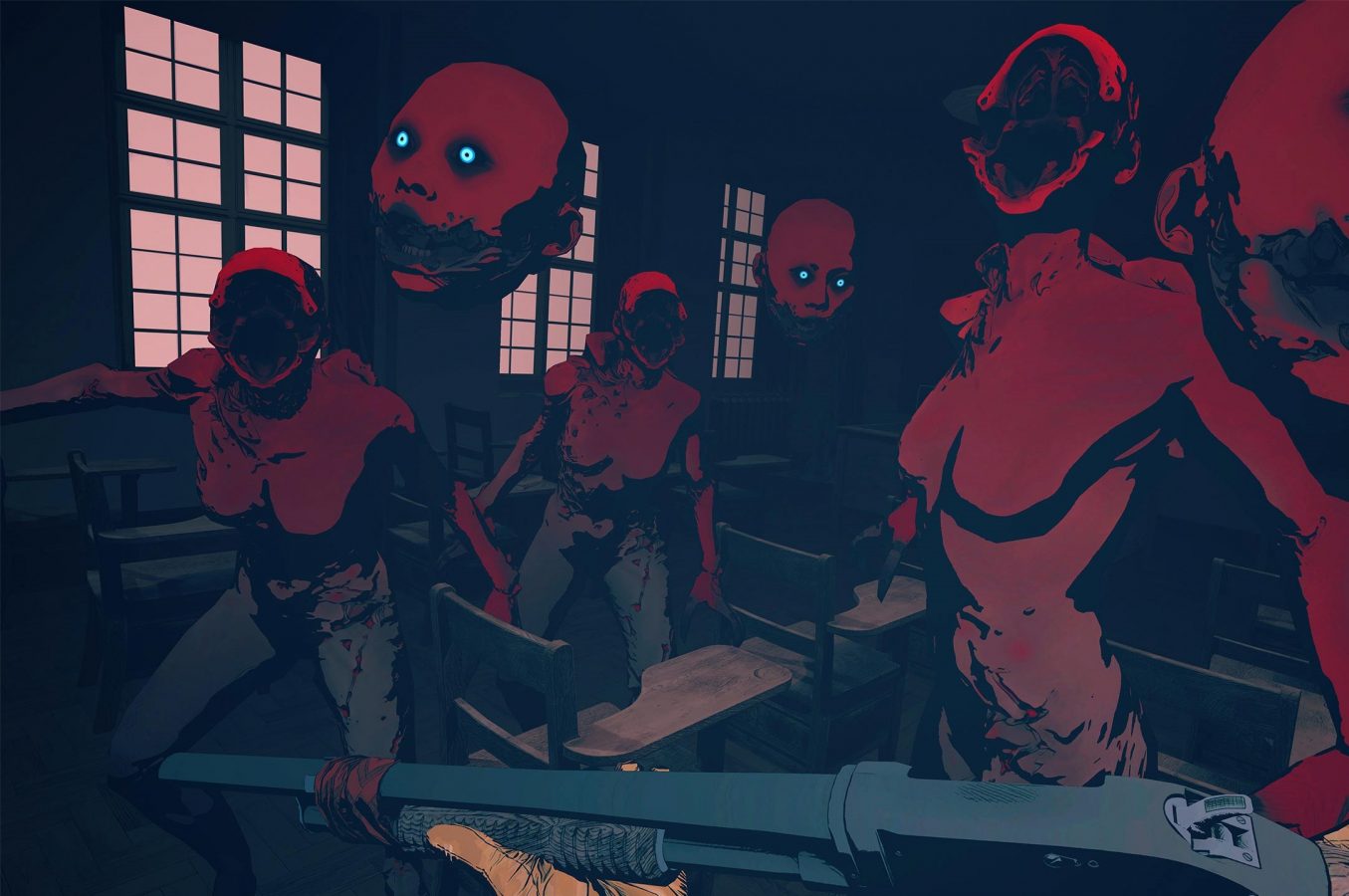 For those interested in the comfort side of VR, it’s pretty standard stuff. There’s plenty of options for movement, ranging from teleportation to move freely, and everything in between. Though I prefer to look around freely, the option for snap turning is also available. Most of the time you’ll be standing still and attacking enemies, so you won’t get any motion sickness (at least not in combat).

I had a blast playing Lies Beneath. I appreciate the dedication to produce a title with superb audio design to enhance the playing experience. There are few VR titles that I can play nowadays that keep me deeply immersed, but when they do I will get lost in them for hours. This one definitely checks that off. And while there are some issues I had with the gameplay, the overall quality and polish this title has is definitely worthy of your library.

Lies Beneath is one of those horror games that’s so tense and stressful but will keep you stuck behind your headset for hours. Though this game may have a few issues, its cel-shaded art style and fun game mechanics are what sets it as a must-have for VR horror fans. It’s got all the hallmarks of being a great, immersive VR title. It certainly doesn’t disappoint.

With a deep interest in writing, Ben followed that into a Journalism degree. As an avid lover for gaming, he is constantly expanding his library with console, PC, and VR games. He's obsessed with stealth games and loves hunting down the smallest of details inserted by devs.
Related Articles: Lies Beneath, VR
Share
Tweet
Share
Submit