War games take many forms, although they mostly revolve around run-and-gun gameplay, strategic planning, and espionage. These games tend to make things more fantastical and less realistic, but sometimes it’s refreshing to look at the realism of situations. Whether this involves more realistic healing, consequences such as permanent deaths, or even resource management, it forces you to be more careful. Add on top of that a real-life event and you’ve got the whole package. Warsaw places you into WWII, where the Warsaw Uprising is beginning, and it is up to you to make this movement more successful. With a mixture of strategic map traversal, tactical turn-based combat, and resource management, there’s a lot to think about if you want to succeed.

As previously mentioned, the game takes place during the Warsaw Uprising. Poland is in the middle of being invaded and some of the people of Warsaw have decided that they aren’t going to take things lying down. They start a revolutionary group and do what they can for their fellow man and country. 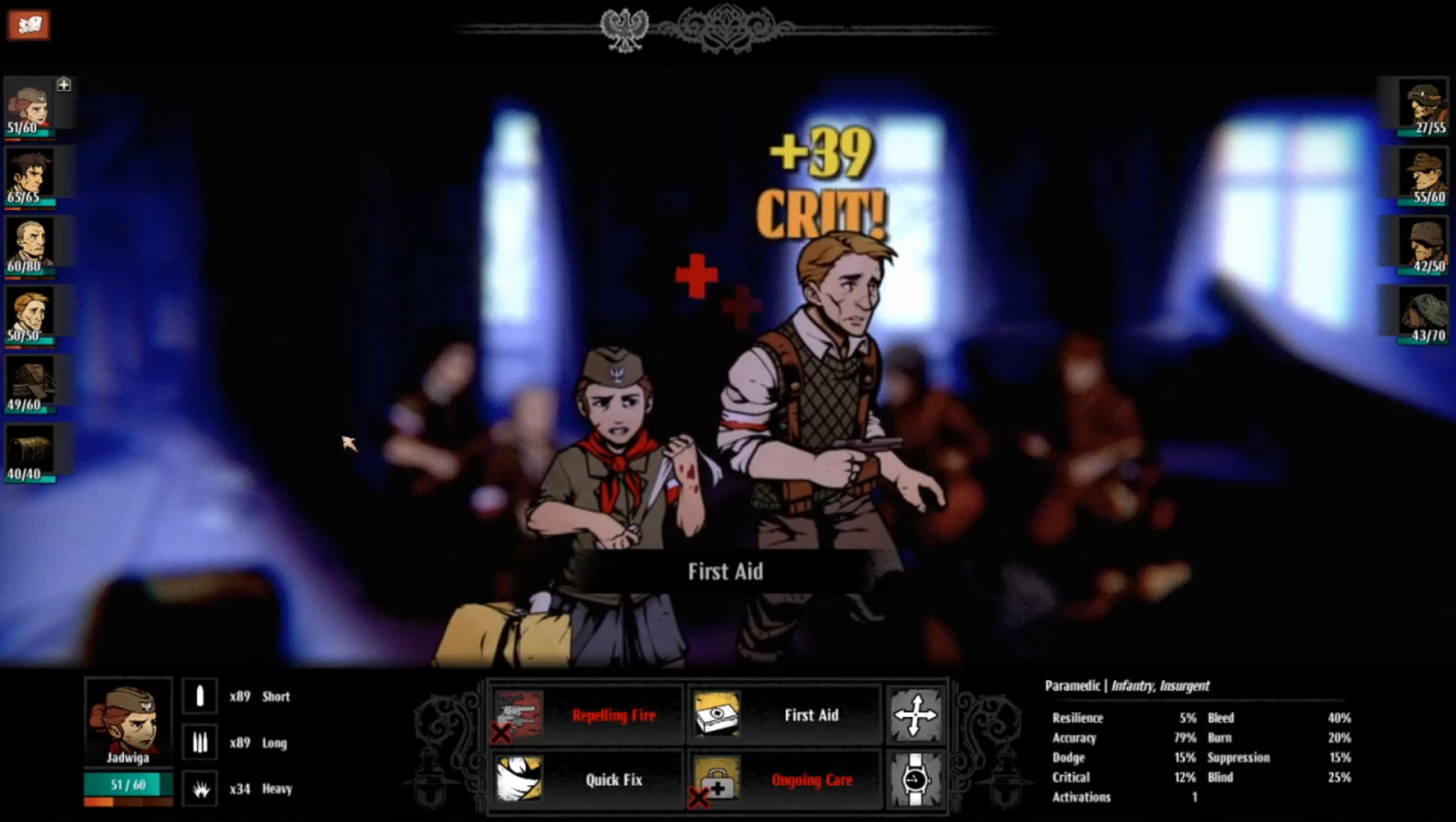 The game’s hub is their secret base, where you can do a variety of things such as recruit volunteer soldiers, check on the injured, pay respects to the dead, trade for resources, promote your soldiers, review information that you’ve discovered about your enemies, and embark on missions. Recruiting volunteers adds them to your available soldiers permanently, but it costs resources if you want to recruit them. Checking on the injured shows you how long it will take them to fully heal after their last battles. No matter how much your soldiers heal during a mission, whatever the lowest state their health reached during the mission is what they return to the base with. For example, let’s say that you healed somebody back up to about 80% of their health before finishing the mission, but they had dropped to about 30% during one of the fights. When they get to the base, they’ll be at 30% health and need to rest. The resting time takes one or more days depending on the severity of the injuries and health loss, so that’s more reason to be careful. This forces you to switch up your team in order to get your injured soldiers back to fighting condition.

In order to start a mission, you head to the mission board and choose from three different options. There are seven districts, but only three will have missions at any given time. Each district has a morale meter that drops after each mission, but successfully completing a mission within a district will replenish some of that morale and lower its morale degradation rate by one. Also, every time you pick a mission in one district, the morale degradation rate goes up by one in the remaining districts. Morale is important because it’s what helps keep the districts strong and also inspires them to keep providing you with resources to keep fighting the good fight. Resources are crucial because without them you have no means to continue the uprising, and as a result will lose. This means that you need to carefully hop between districts whenever you can in order to maximize the benefits that they can give you. It can be a bit stressful to deal with honestly, especially since you know that while helping one group, the others are losing hope. 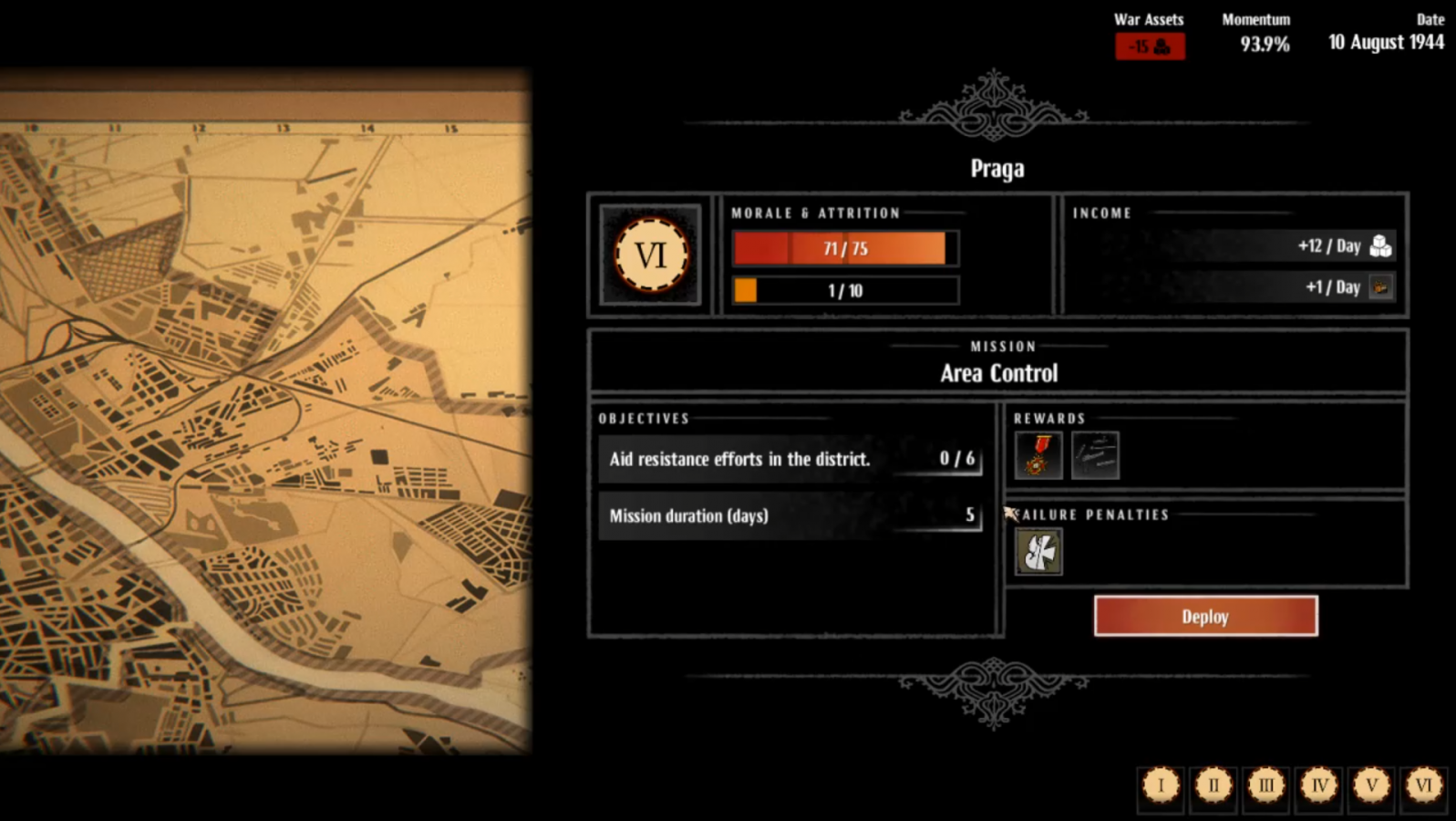 When preparing for a mission, you must choose your team, their battle positions, and what supplies you’ll take with you. You can only take four soldiers and a limited amount of supplies. If you fill your inventory completely, then you won’t have room to pick up anything that you find in the battlefield, so you’ll have to think carefully about what you may think you’ll need. You have to balance the need for ammo while also leaving space for collecting as much useful stuff as possible.

You traverse the map by moving your cursor to a location and holding down the click button. Moving takes action points, and if you don’t complete your mission requirements before they run out, you automatically fail. It’s tough, but it forces you to move strategically and not waste time. On the map, you can encounter events that have consequences based on choices you can make, along with looting supplies from areas, and of course, fighting enemy soldiers. 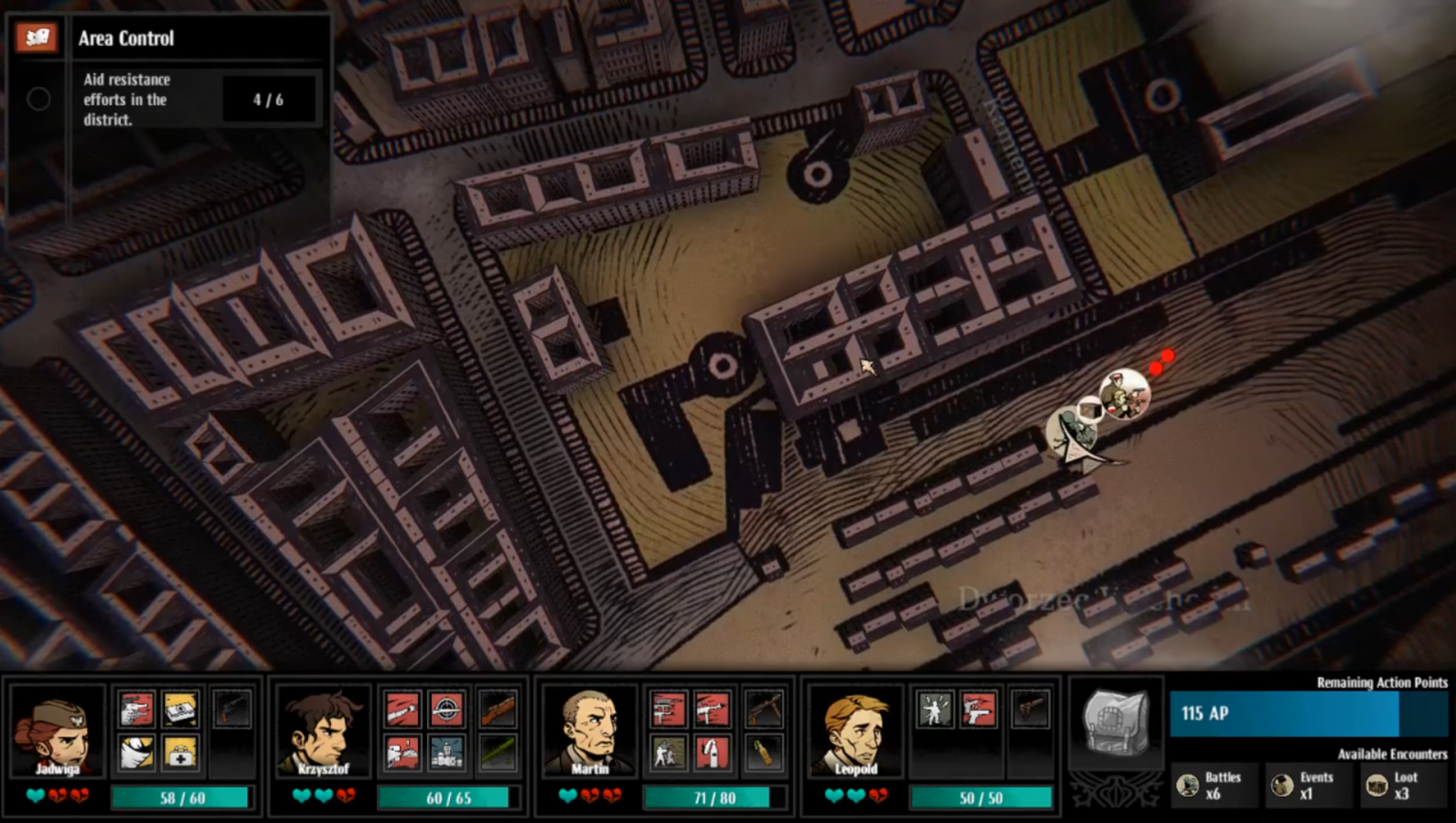 Combat is turn-based, but has an interesting twist. Each round allows both sides a certain amount of actions to take based on the number of combatants they have. If you have three soldiers, you get three actions, or five actions from five soldiers. That being said, not every soldier has to do something. They can either choose not to take an action with a skip button or one of the others can perform multiple actions. Also, there’s no order beyond the players’ turns. That means that after one of your soldiers performs an action, then your opponent can do the same, then back to you, and so on. Each character has stamina, and each of their actions requires one or more stamina to use. The downside to using stamina is that the lower a character’s stamina is, the more vulnerable they become and the weaker they get. It makes sense, but it still hurts to deal with. Fear not though, because every character regains one stamina at the start of a new round. From there, the process repeats until the battle is won or lost. 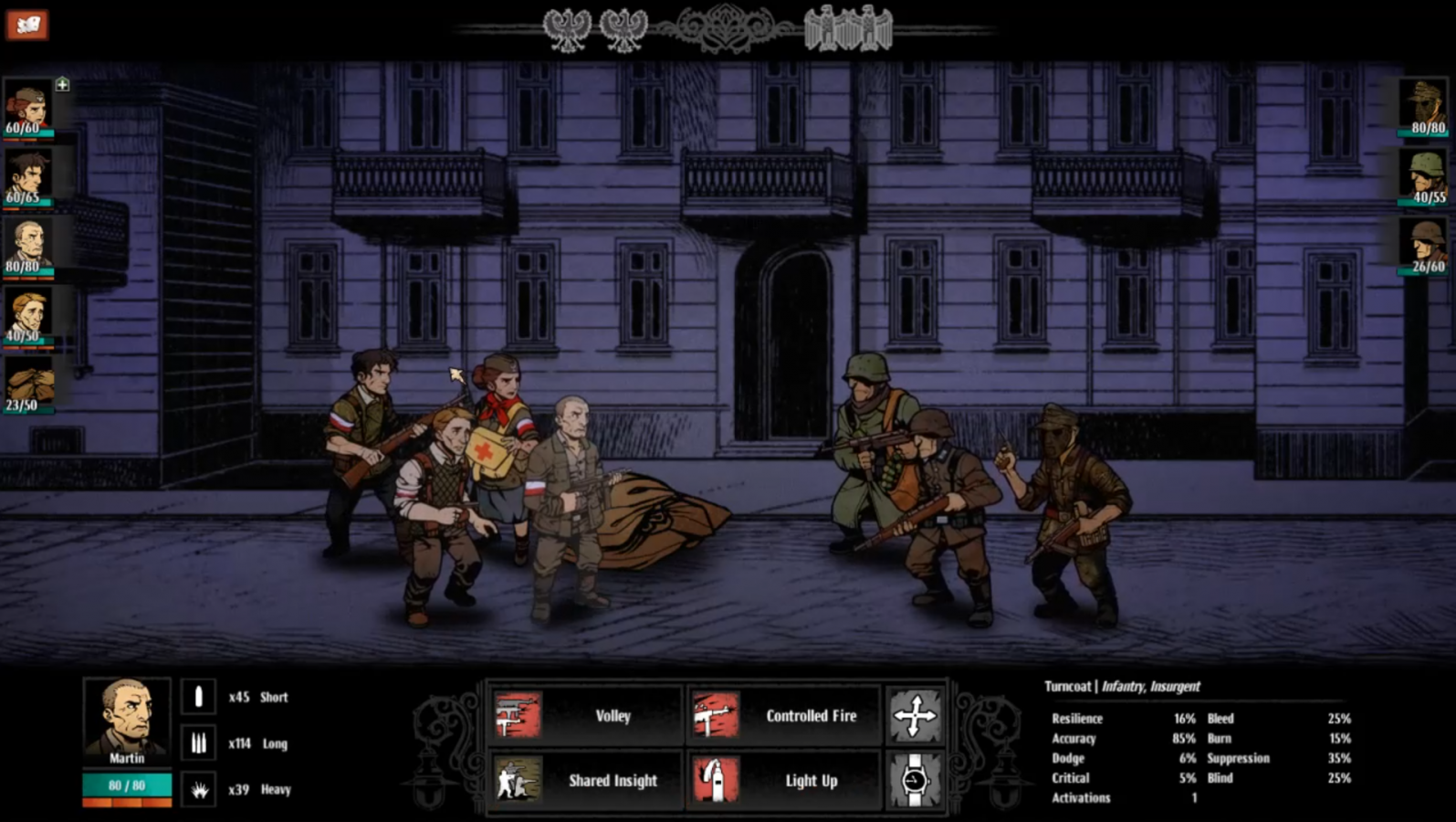 During combat, you can perform offensive or defensive actions (depending on what skills each character has), and move spaces. In addition to stamina, attacks cost ammo; different attacks have different costs, so be sure to look at that. This is where ammo management comes into play. If you run out of ammo at any point, you have no way to fight back and are at the mercy of your opponents. There are two lanes on each side of the battlefield that soldiers can stand in, and one of the coolest aspects is how this affects combat. If you attack an enemy in the same lane as you, then you’ll do decent damage if it hits, but if you attack an enemy in the other lane, then you’ll do increased damage. It’s pretty clever since it’s trying to replicate the idea of an enemy being more vulnerable to an attack coming from the side instead of head-on. You’ll definitely want to use this to your advantage in order to wipe your enemies faster. Oh, and each attack has a certain range that it can hit, so you need to take that into account before trying to select a target.

At the end of a mission, you get a results screen that shows you what you accomplished, how the war effort is going, what your supplies are looking like, and a random event that you may have to make a choice for. Once you’re done here, it’s time to head back to base. One consistent mission reward is a commendation medal, which can be used to promote one of your unique soldiers. This gives you access to one of two new skills every time you promote them, which is pretty helpful. The higher they get promoted, the more medals it takes to promote them again. 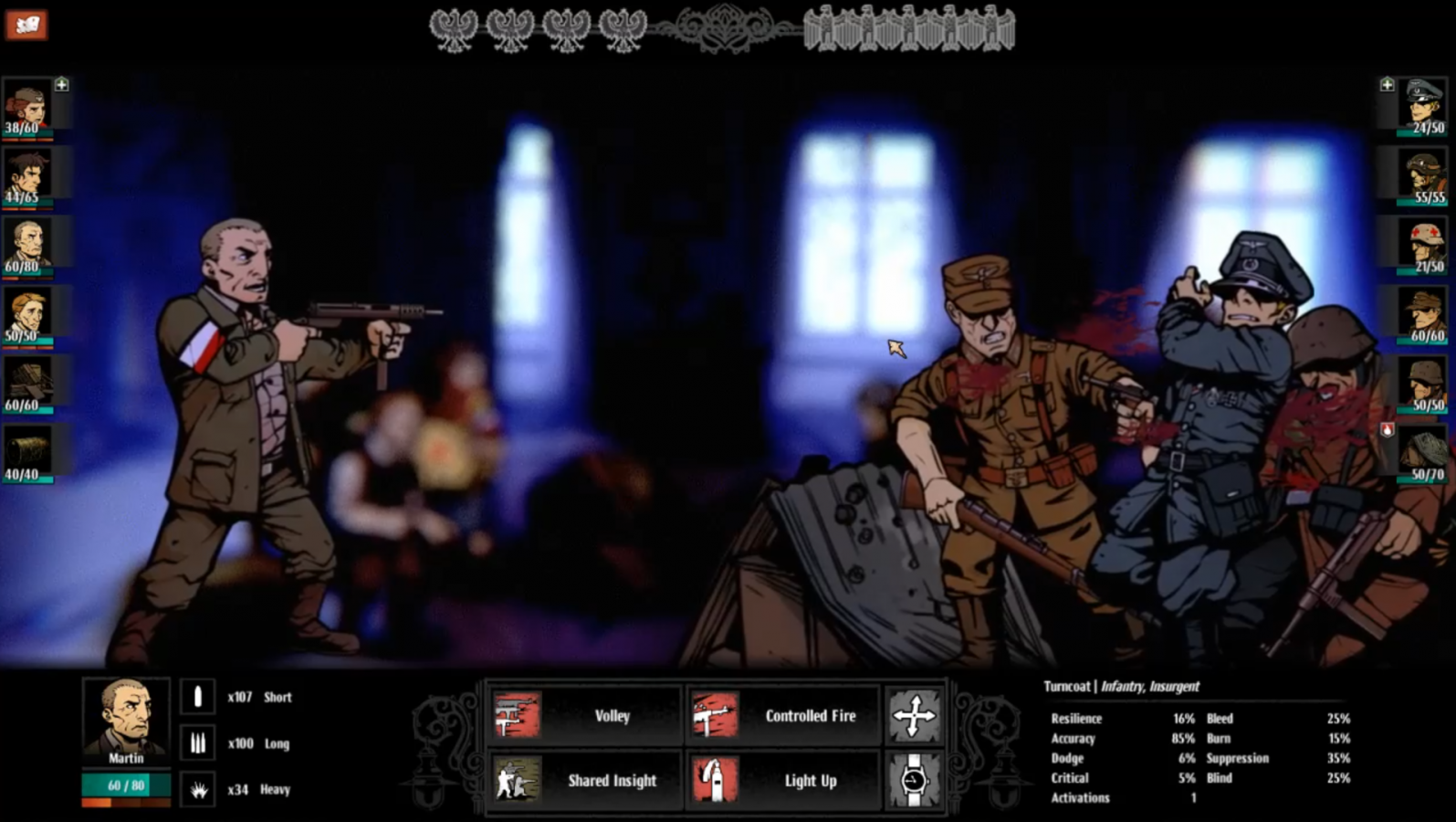 In terms of gameplay, it does handle tactical turn-based combat well, but the resource management, injuries, and perma-death put a damper on things. Having to worry about limited ammo when you already have perma-death factors in place makes things more stressful. A good challenge is appreciated, but not when several aspects can mesh together to bring you down. All it really takes is some particularly tough enemies, the wrong team setup, and some bad luck in order to ruin a playthrough. When you may be forced to start a mission with critically injured fighters, you know you’re in trouble. If you’re careful, this shouldn’t be too much of an issue, but it’s still one that can hurt to deal with if it comes up. Even so, Warsaw is a good tactical turn-based combat game, although it has some tougher stakes and some management aspects that can bring it down.

Warsaw is a tactical turn-based game with some interesting aspects, although some of them hurt more than help. The setting is neat and the plot has real stakes, which is nice in a wartime game. The injury system along with ammo management will likely be a hit or miss for many.

Codi loves to play video games and watch movies. He will watch almost any kind of movie just to experience them. His ideas take inspiration from the shows and movies he watches, and games he plays. He also loves a good pun.
Related Articles: Warsaw
Share
Tweet
Share
Submit