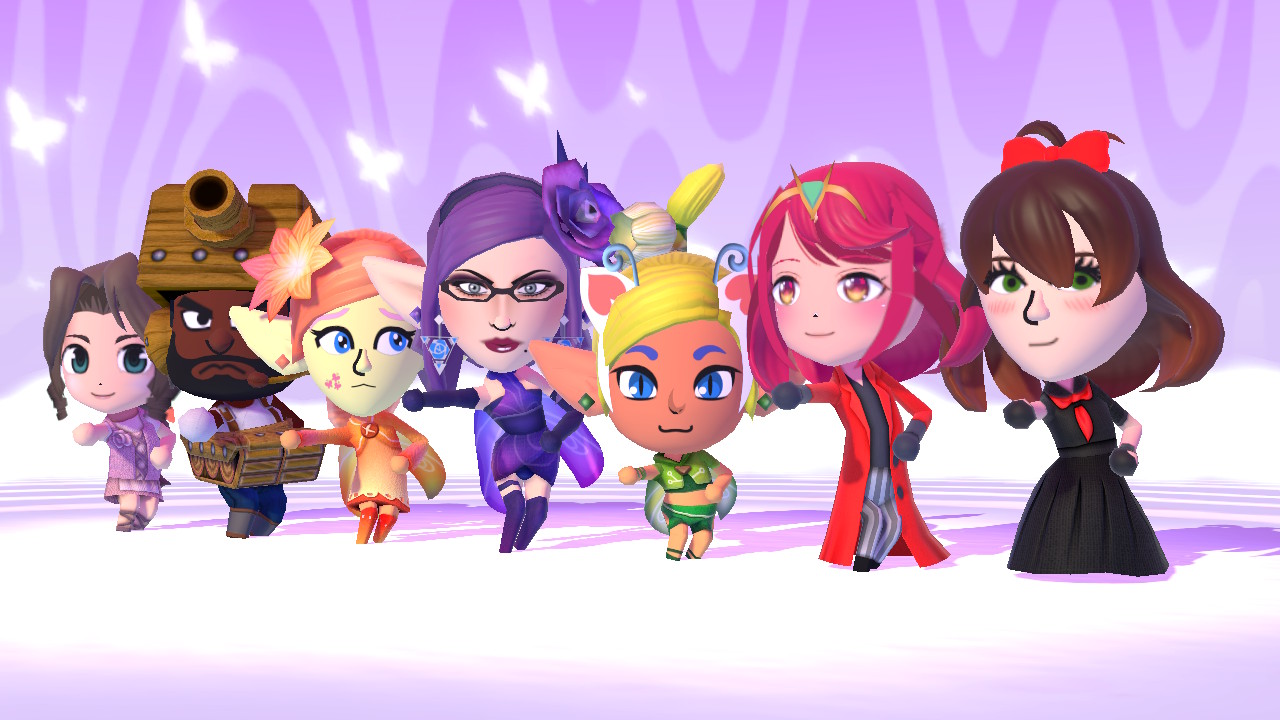 The Dark Lord Steve Urkel (yes, from Family Matters) is stealing faces from people all across Miitopia, and only one person can stop him… whoever you want! As an RPG where you decide who plays what role, Miitopia isn’t shy about being weird as all get-out. It’s got a unique sense of humor and easy to grasp gameplay that, while it doesn’t always land, is a ton of fun. The game was originally released on the Nintendo 3DS late in its life, so this new version for the Switch gives the game a much needed second chance while adding a few new things for returning players. Editor Kay Purcell reviewed the original, so here we’ll mostly be focusing on what’s new.

After choosing a protagonist for our tale, they’re chosen by god to stop the Dark Lord and granted special powers to combat his armies called jobs. There are several jobs to choose from, like standard classes Mage and Thief or wackier options such as a Cat or Chef. Your job, along with the choice of their personality type, determines basically everything about your character; from the clothes they wear and what they can do in battle to how they interact with other party members. Those interactions are what make Miitopia interesting. Battles are a very standard affair, the game is turn-based and you only control your main character so you don’t actually play the game all that much. Instead, you watch the consequences of your earlier choices play out with characters getting into petty fights or cheering each other on. These events are fun to witness for a while, but sadly it’s just too shallow to remain interesting for the game’s runtime. There are only so many times I can be entertained by Nia from Xenoblade Chronicles 2 getting into a fight with Barret from Final Fantasy VII only for it to be broken up by the party’s horse.

With that, let’s get into what’s new in this Switch release. The game’s visuals have made a big leap from the 3DS’ 240p screen, with everything now presented in glorious HD. The charm of the original isn’t lost in the translation though, environments like the Realm of the Fey and Neksdor are still weirdly beautiful in addition to being simply gorgeous. I’m one of the few people who still used the 3D on the 3DS, and I think this upgrade is a worthwhile tradeoff. However, it does bring with it some performance issues we’ll get to in a bit.

On the gameplay side, Miitopia adds two significant spins on the original: an equine companion and Outings. Outings are a new way to get your Mii’s relationships to level up. Every outing ticket has a specific location like the beach or a botanical garden that two characters will visit together and gain a significant amount of relationship points. Improving two Mii’s relationship allows them to perform certain actions in battle from cheering each other on to getting vengeance on an enemy that downed the other. As a comedy game, this is where Miitopia draws most of its humor, and these extra ways to get characters to become closer more quickly is greatly appreciated. Although, these tickets are just scarce enough to be frustrating and it feels like overall relationship growth has been reduced outside of these events compared to the original. Outings are where those performance issues come into play. These places are absolutely gorgeous, but the frame rate drops dramatically here especially in docked mode. It’s not a huge issue since no gameplay occurs in these scenes, but it’s a big enough dip that even the most casual observers will be bothered by it. 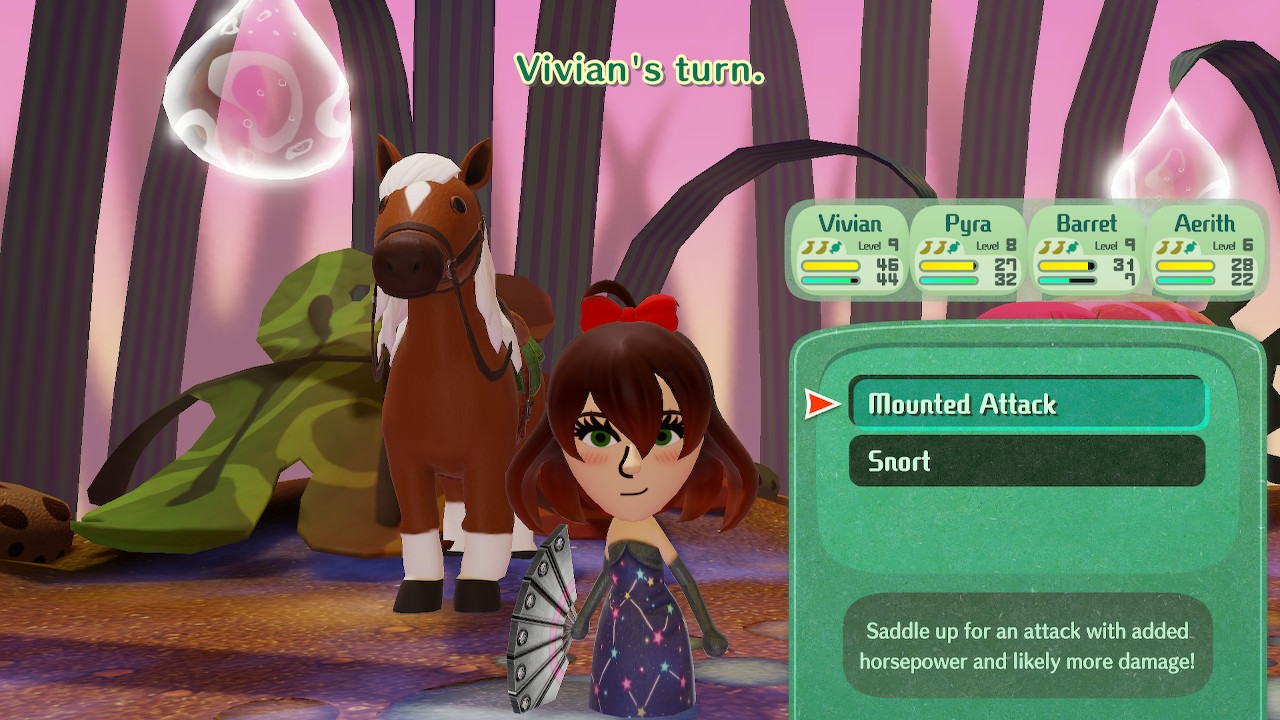 Early on in the game, your party will encounter a horse, which you can customize and name, that you’ll take with you on the rest of your journey. Just like other party members, the horse can level up their relationship with everyone granting special abilities in certain situations. The horse is a great addition to the game, but simultaneously doesn’t add a whole lot. Unlike other relationships, you don’t gain something new with every level. Miis can learn to ride the horse in the field to speed up exploration (essentially doubling your speed with fast forward) and they can even mount it in battle to perform special, powerful attacks. These are just some of the basic abilities to make the horse worthwhile, and you don’t gain any truly unique abilities until near the end of the game, and even then it’s likely that only one character will be able to use it. You have to have a character sleep in the barn with the horse to improve their relationship, but this will inevitably leave one character alone gaining nothing since you have an even number of party members. Simply put, your time is better spent getting relationships with other party members for abilities that will trigger more often than the horse. Miitopia isn’t a difficult game by any sense of the word, but the game will go much smoother if your currently chosen party likes each other.

The additions to creating and customizing a Mii’s appearance have taken the internet by storm, with people making detailed recreations of just about everyone under the sun including some more creative ideas like a Fortnite V-bucks card. While the standard Mii Maker has been great since its inception and subsequent additions on 3DS and Wii U, Miitopia brings it to a whole new level. After creating a Mii, you can give them a wig and makeup to further customize them. Wigs have two pieces, back and front, and generally look more detailed than the standard hair selection. The real meat here is in makeup, where you can create basically whatever you want. Here, you can add decals to a Mii’s face in several different categories, from Eyes and Mouth to Other, that will function as whatever you place them as so expressions work properly. For example, you can make more anime-esque eyes that will still move and blink like the default. I haven’t spent a ton of time customizing Miis, but people have made some great creations that I imported to my game using the sharing feature. It can be a hassle to find good-looking Miis though, since the only way to get them without a special code is in the Popular tab where characters don’t have wigs or makeup. This inadvertently takes away from the magic of the original, where you would randomly import Miis when you get to a town and simply observe the chaos. Here though, if you want good looking Miis your selection will be much, much smaller consisting of only a single creator code or friend which can lead to you getting duplicate characters. 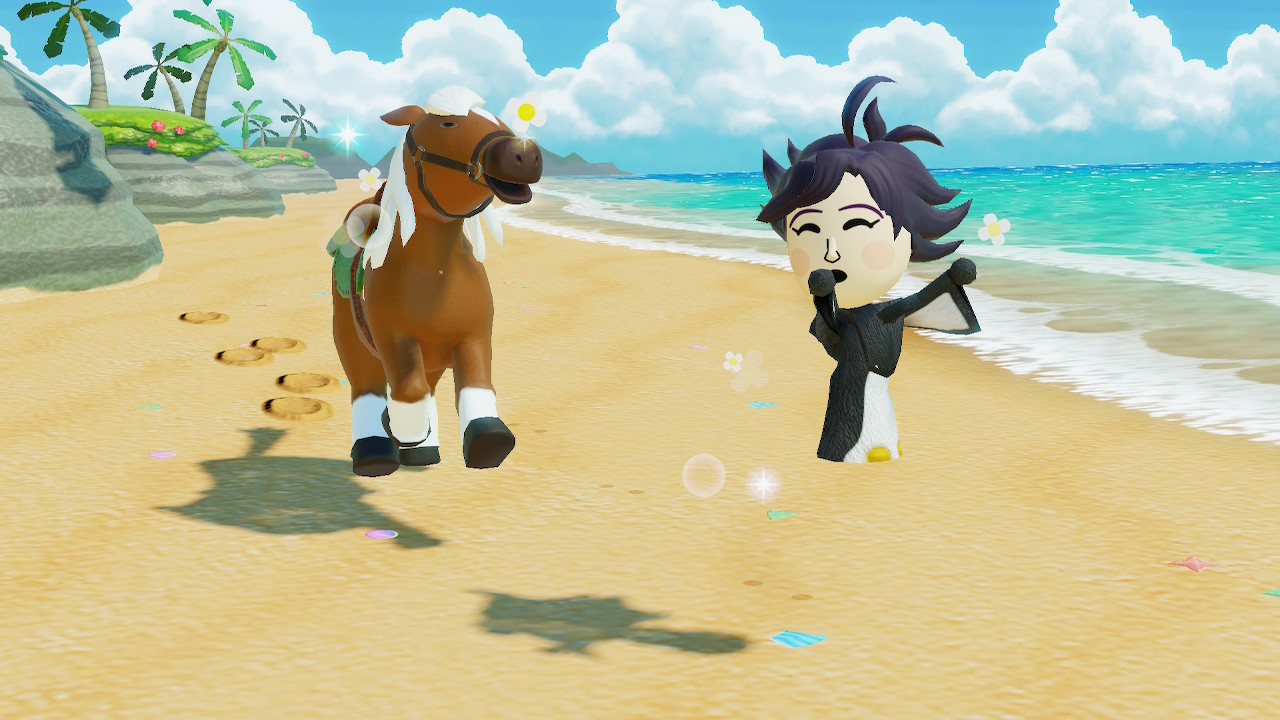 Outside of Outings, the horse, graphics, makeup, and wigs, Miitopia is essentially unchanged, so it still has the same major problems the original had. Miis getting into squabbles feels arbitrary and random, there are too few jokes for its run time, and the balancing is way out of whack. It’s especially disappointing that the balance wasn’t tweaked at least a little, since certain personalities and jobs are straight up better than others. The grub system, feeding snacks to Miis to improve their stats permanently, will still leave your main character much more prepared for the end game while everyone else can barely hold their own in battles. While I still enjoy Miitopia for what it is, a wacky comedy game light on gameplay, it still needed significantly more improvements to keep it entertaining until the credits roll at the very least.

Summary: Miitopia is a fun and funny if flawed game. While this rerelease may be worthwhile to some for the character creator alone, its unwillingness to provide deeper and more balanced gameplay makes it difficult to want to experience everything the game has to offer or even just finish it.

David is the kind of person to wear his heart on his sleeve. He can find positives in anything, like this is a person who loved Star Fox Zero to death. You’ll see him playing all kinds of games: AAAs, Indies, game jam games, games of all genres, and writing about them! Here. On this website. When not writing or playing games, you can find David making music, games, or enjoying a good book. David’s favorite games include NieR: Automata, Mother 3, and Gravity Rush.
Related Articles: Miitopia
Share
Tweet
Share
Submit