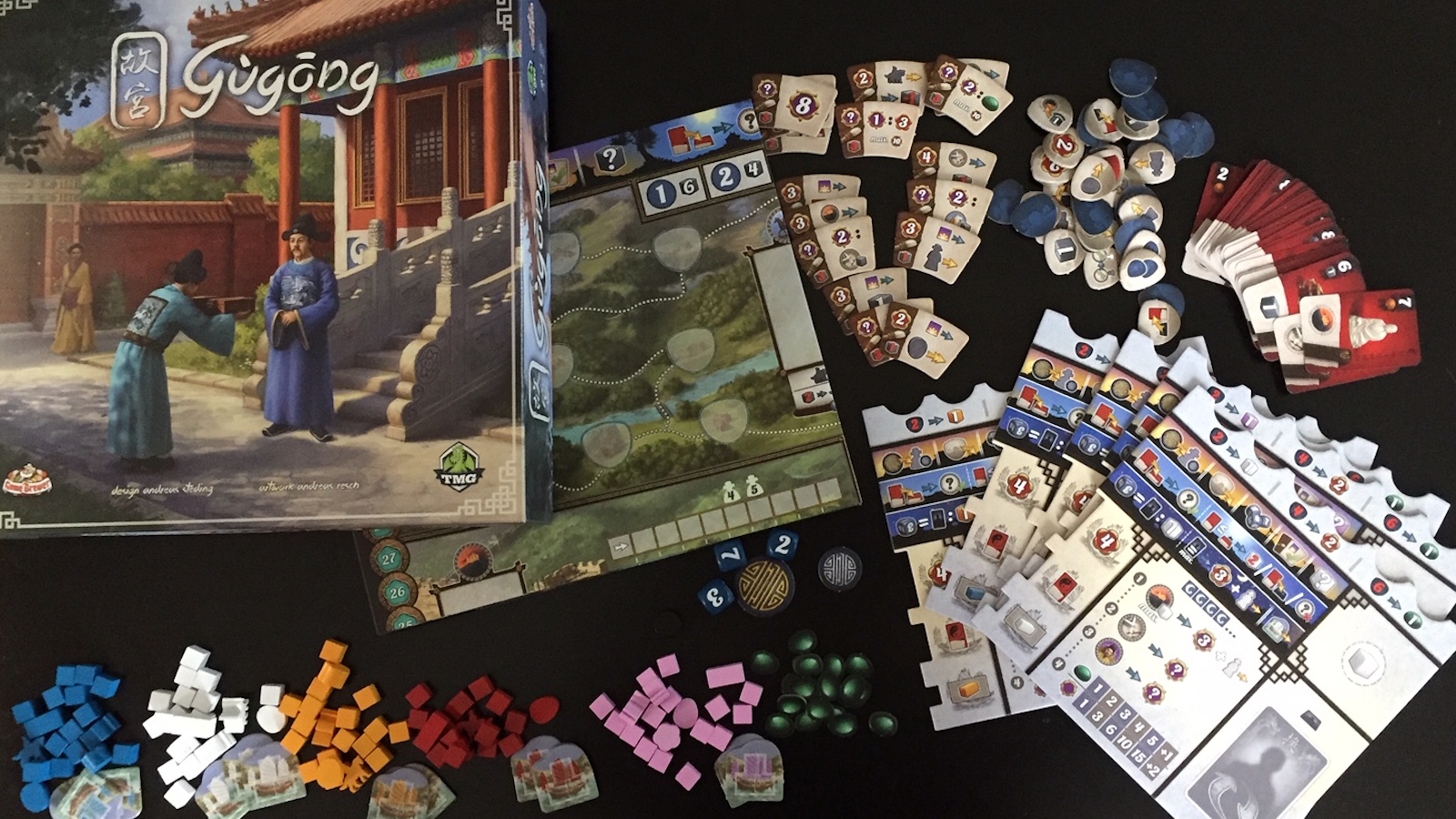 It’s China in 1570, and the Longqing Emperor is doing his best to expand the Great Wall while trying to rid the country of the corruption common in the days of his father, the Jiajing Emperor. You are the head of a Chinese family who is still used to the old ways. You and the other families, fearing punishment for corruption, have set aside the ways of bribing and have adopted gift giving. You and high officials exchange gifts when you want something done. Who cares if the gift they give you is worthless, while the one you give is quite expensive? Just do whatever needs to be done to get on top! 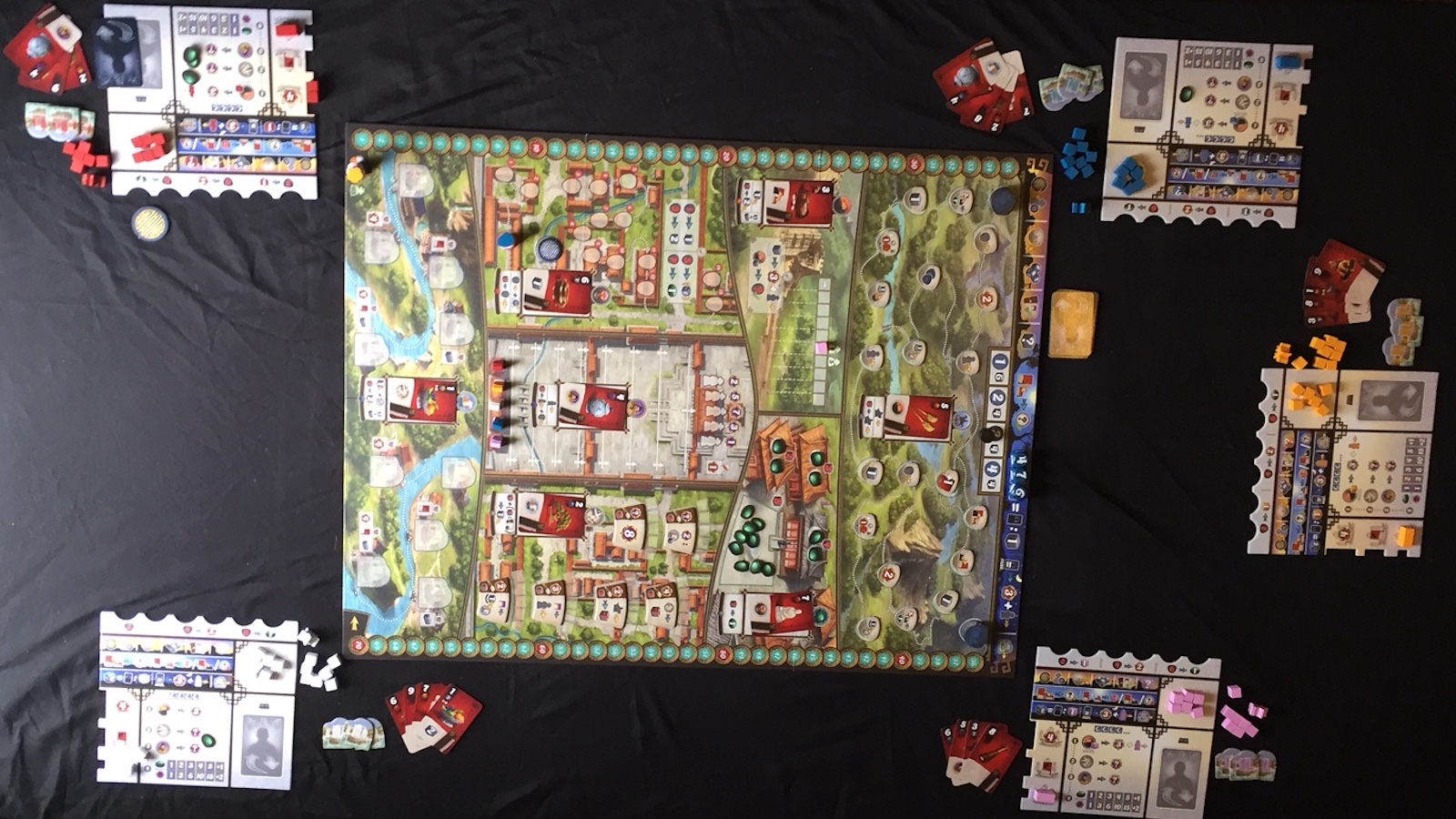 Gugong is a 1-5 player Euro-style worker placement game. Players try to earn victory points (or VP) by visiting 7 different areas of the board, and trading gifts with the officials there for favors. Your gift has to be more valuable than the gifts the official is presenting though, or you will have to sweeten the pot to get what you want from this area.

Each player starts the game with 4 gift cards in their hand. Each set of cards is pre-selected and handed out according to player order. They each have their own player mat with areas for jade collected, their servant pool, and discard pile. The mat also has notches to place servants and travel tokens later in the game. 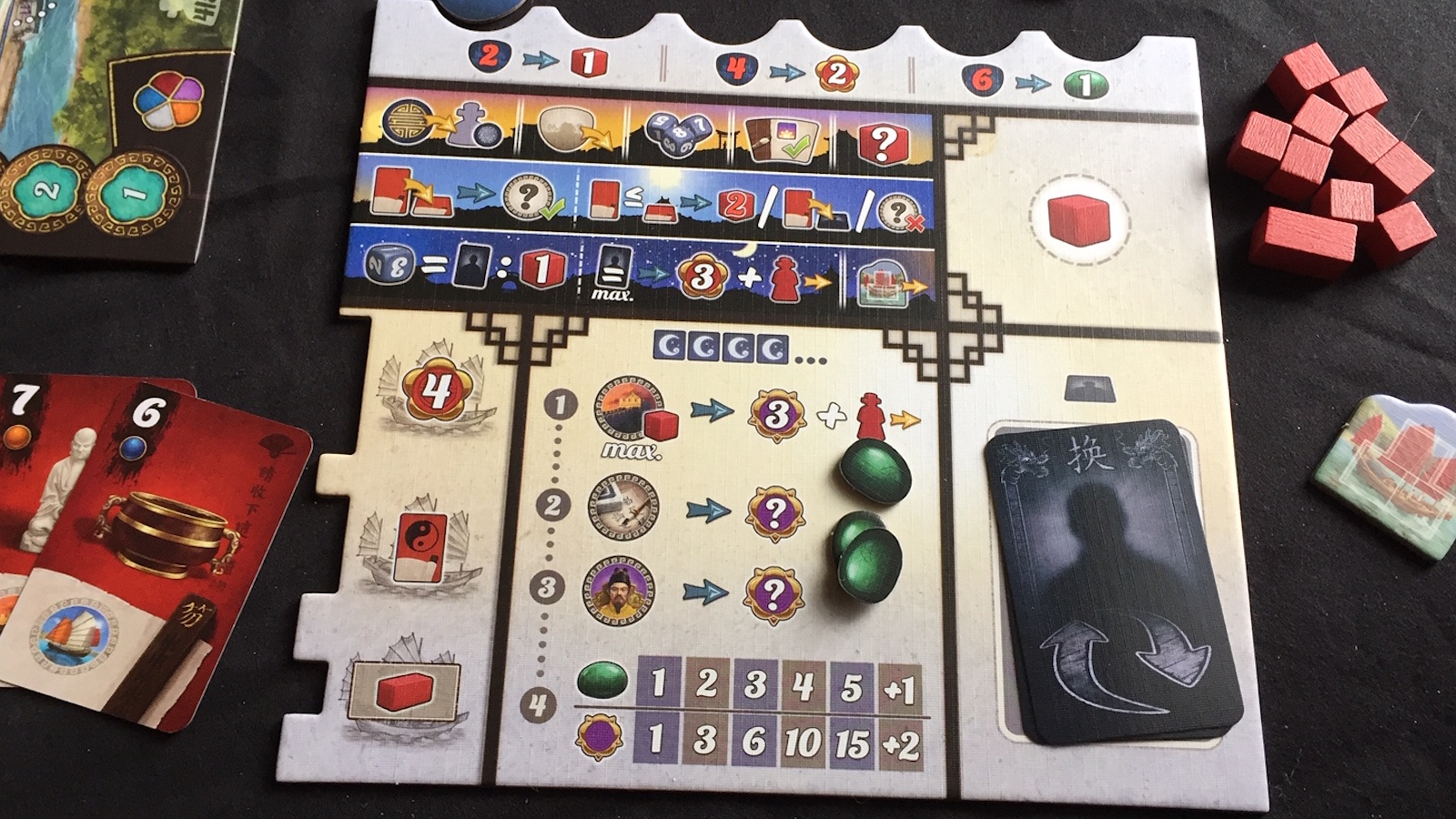 The game board is 2 sided, and players flip it to the side that corresponds with the player count. The areas on the board that players can spend their gift cards to take actions are Travel, The Great Wall, Jade, Intrigue, The Palace of Heavenly Purity, Decrees, and The Grand Canal. Each area has a gift card already on it with a value assigned to it. To interact with an area on their turn, a player must exchange a card from their hand with the card in the area they would like to activate. The card given must be of greater value than the card taken, or the player must also offer 2 of their servants, or discard a second card in order to take that action. Most cards have the symbol of another area on the board on them, allowing the player to engage in 2 total actions (in 2 areas, or twice in the same one), or a one-time prize. Many of the more expensive cards do not offer such an added benefit. The actions in the 7 areas all offer the player different ways to get the most VP out of their turn.

Traveling lets them access randomized travel tokens giving them different benefits. Those tokens then get placed face down in the special notches for them on the player mat, and can be exchanged for servants, VP, or jade at any time. Be sure to claim the prize you want quickly, as they are all up for grabs to anyone. 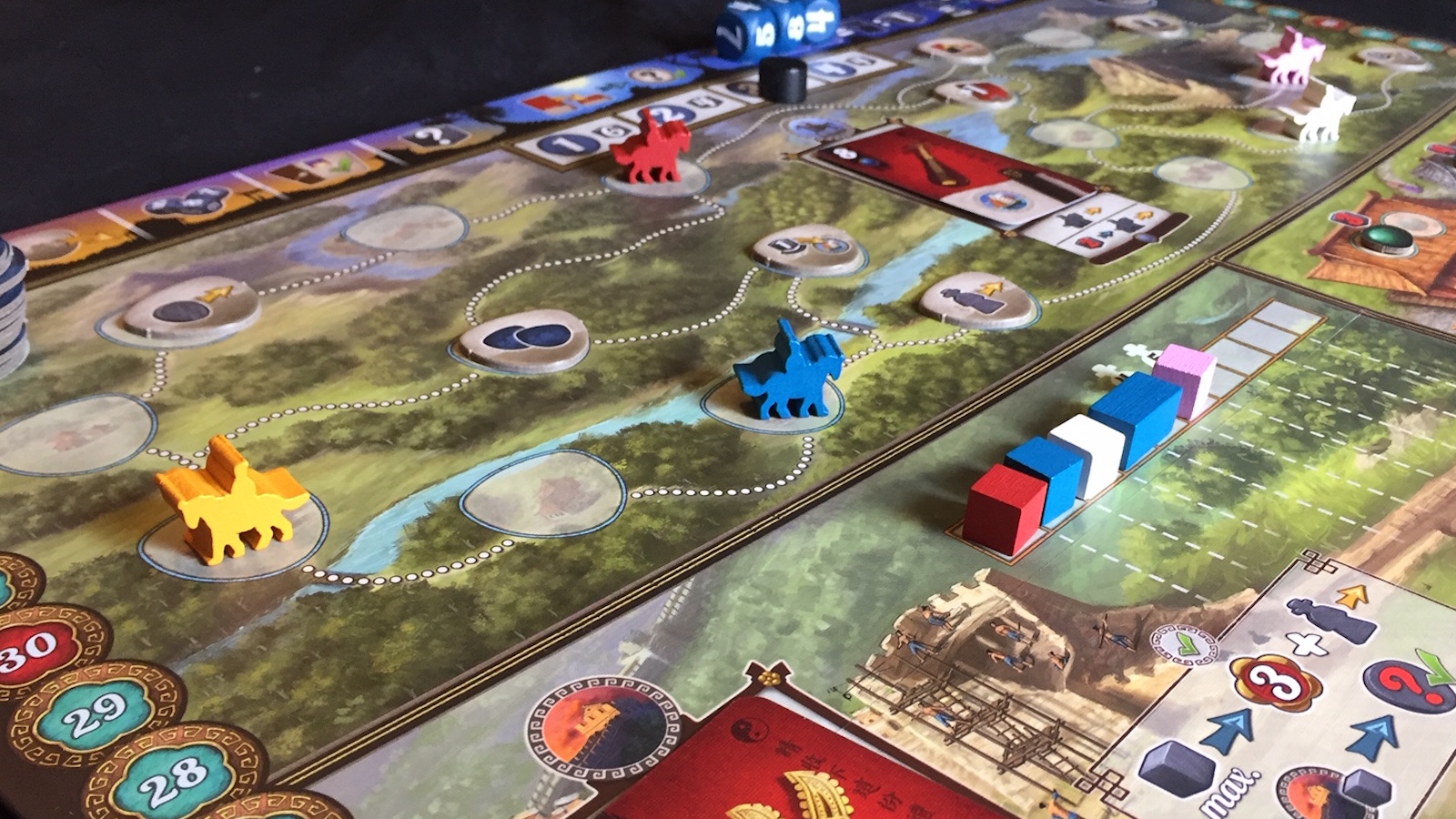 Helping build The Great Wall has you send your servants to the wall itself to build. Should you do this more than the other players you will benefit the most, but everyone who helps gets some sort of payment once the max amount of servants are on the wall.

The Jade Market lets you spend servants to purchase expensive Jade which are worth many end-game VP.

The Intrigue track breaks any and all ties in the game. You will always win a tie against someone behind you on this track, but when payment is given for helping build The Great Wall, you can lower your place here, and take benefits in exchange for how far back you’ve moved your intrigue marker.

The Palace of Heavenly Purity is where your Envoy goes to pray. He does not start the game at the Palace however, and must climb up to it by the end of the game to do so. The quicker the player gets this done, the more end game VP they get out of it, but if a player fails to do this, they earn no VP at all, and immediately lose.

Decree Tokens are randomized, and 2 are placed in each of the 3 levels. There is room for each player to send their servant to each decree, but the more servants already there when you send yours, the more it will cost you to do so. The decrees can help your achievements in all other areas of the board, and are very powerful.

Finally, The Grand Canal is where servants can be sent to boats in order to gain points, extra cards (which essentially gives you extra turns), or the important “double servant”. This servant takes up two spaces and counts as such towards servant costs on the board, but recalling him at the beginning of each round only counts as recalling one servant.

This all takes place in the day phase of the game. As you can tell, everyone has many options to choose from, and finding the right one to play at the right time is the best part of a worker placement game such as this. One can find that their cards aren’t ideal for the actions they want to take, and have to find ways in the other parts of the board to gain the same benefits they were going for. They could instead spend more servants in order to take the action they did want to take, and end up coming up short for the turns ahead. All the while, it matters which gifts they take in exchange for these actions once the day phase is done. Not only are these cards the player’s hand in the next round, but in the night phase that follows, if the values of these cards match the values on the three dice rolled earlier (in the morning phase), players can get many more servants with which they can seize the new day. The person who does this best also gets VP, and gets to move their Envoy towards the palace.

The morning phase of the next day follows, and wasn’t mentioned until now because the beginning of the game is the only round that skips past it. This phase is generally gaining servants, resetting the board for the next round, and rolling the dice to see which gift cards would be best to receive the next round. 4 rounds are all players have to gain as much VP as possible before the game ends.

Gugong, like many Euro worker placement games, looks daunting at first. There are many icons all over the game board, and player mat, and places to put servant cubes that are confusing and intimidating to a newer gamer. The rules are pretty straightforward, and easy to learn, so don’t let that make you shy away. In fact, like any good Euro game, once one learns to interpret the iconography on the boards, all of the player’s options are always where one needs them as a reminder for what they can do, what they will get in return, and the cost of that action. The board itself helps the game scale well to different player counts having two differently designed sides for the amount of players at the table.

A good worker placement should have many options, some better than others, but all good options if played with the right timing. Part of the fun is that there are usually so many opportunities, but other people can beat you to them, and take all the room allowed for them. It’s up to you to pivot, and take one of the other great options to best utilize your turn. I found that although Gugong does this well for the most part, there are two areas that don’t really live up to the others.

The Intrigue track is a good idea, breaking any and all ties, but the benefits of it don’t really seem worth the time to visit it. Ties don’t come up often, and the benefits of giving up places on the track can be acquired elsewhere, so putting effort into this track quickly seems not worth the time. This area also awards you with a marker making you the first player in the next round, but I found that sometimes it was better not to have this privilege, so once again this area was ignored. 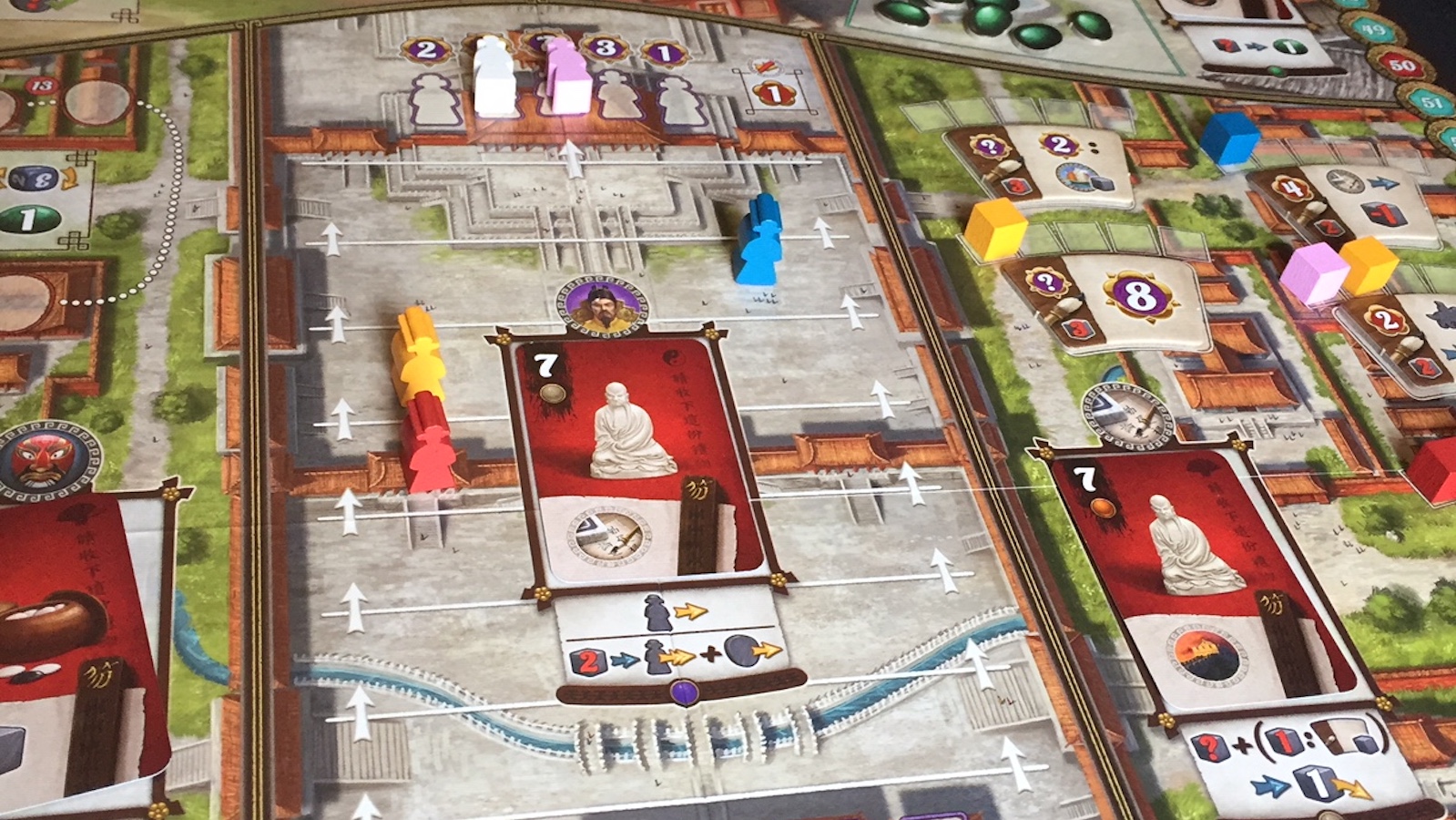 The other area seemingly not worth your time is the Palace of Heavenly Purity. The end game points aren’t huge for getting to the top the quickest, and you get no other benefits during your turn for visiting. The difference here being that I loved this part because of its uselessness during the game. Remember, if you don’t take place in this part of the board, and don’t reach the top by the end of the 4th round, you LOSE. No questions asked, you get no points, you lose. I love that you have to take part in this less exciting part to simply participate in end game scoring. I do feel it could be a little harder to reach the top though. It seemed with all the options to help you get there, no one struggles to achieve this.

My only other gripe with this game is in the solo player variant. This is the way that I first played the game, and won by a large margin. It seems too easy, and the artificial player they tried to create with the cards included for this mode were too random to be effective. I didn’t find this as a turnoff though, as I’ve never picked up this type of game for the solo play, and I commend them on trying. I don’t know how they could have done it better, and I’m honestly impressed with the effort.

Gugong looks great, and is a welcome change in a well tread genre, and I can see myself playing this one again. The problem is, I first played games like Viticulture and Raiders of the North Sea. Comparing Gugong to games such as these points out the flaws in the game. They aren’t huge, but they’re there nonetheless. Convincing fans of the genre to come back to this one may be difficult, but that doesn’t mean I won’t try.

Gugong won’t replace any favorite games for fans of the worker placement genre, but if you catch someone who isn’t yet spoiled by the masters in this field, this game is very enjoyable and random enough to keep bringing to the table.

Nick Cvercko is a 37 year old fella from Flagstaff Arizona that lives with his wife and pets in Austin TX. You can find him at Lamberts Downtown BBQ mixing up all the tasty drinks. He may be a little too in to board games.
Related Articles: Gugong, Tabletop
Share
Tweet
Share
Submit