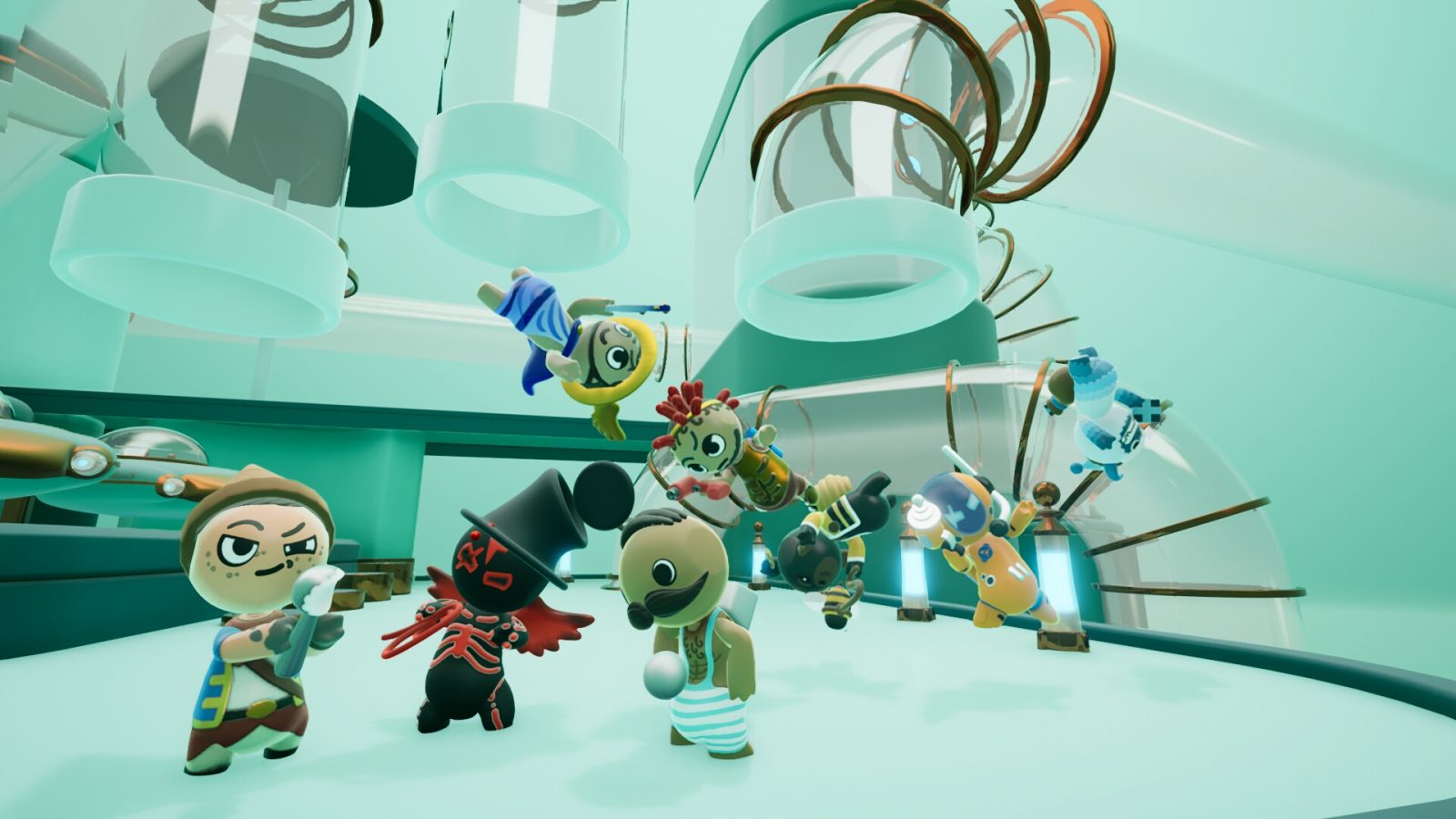 Ever since its holiday livestream earlier this month, Google Stadia’s been trying to leverage itself as a fun online multiplayer experience. While I do imagine it’s fighting an uphill battle regarding player numbers, I can still find enough people to play Pac-Man Mega Tunnel Battle and Super Bomberman R Online nowadays, so hey, I have at least 64 people duking it out on Stadia. Released during the aforementioned livestream, Stadia exclusive Outcasters is here with a fun little gameplay mechanic that’s made for multiplayer. 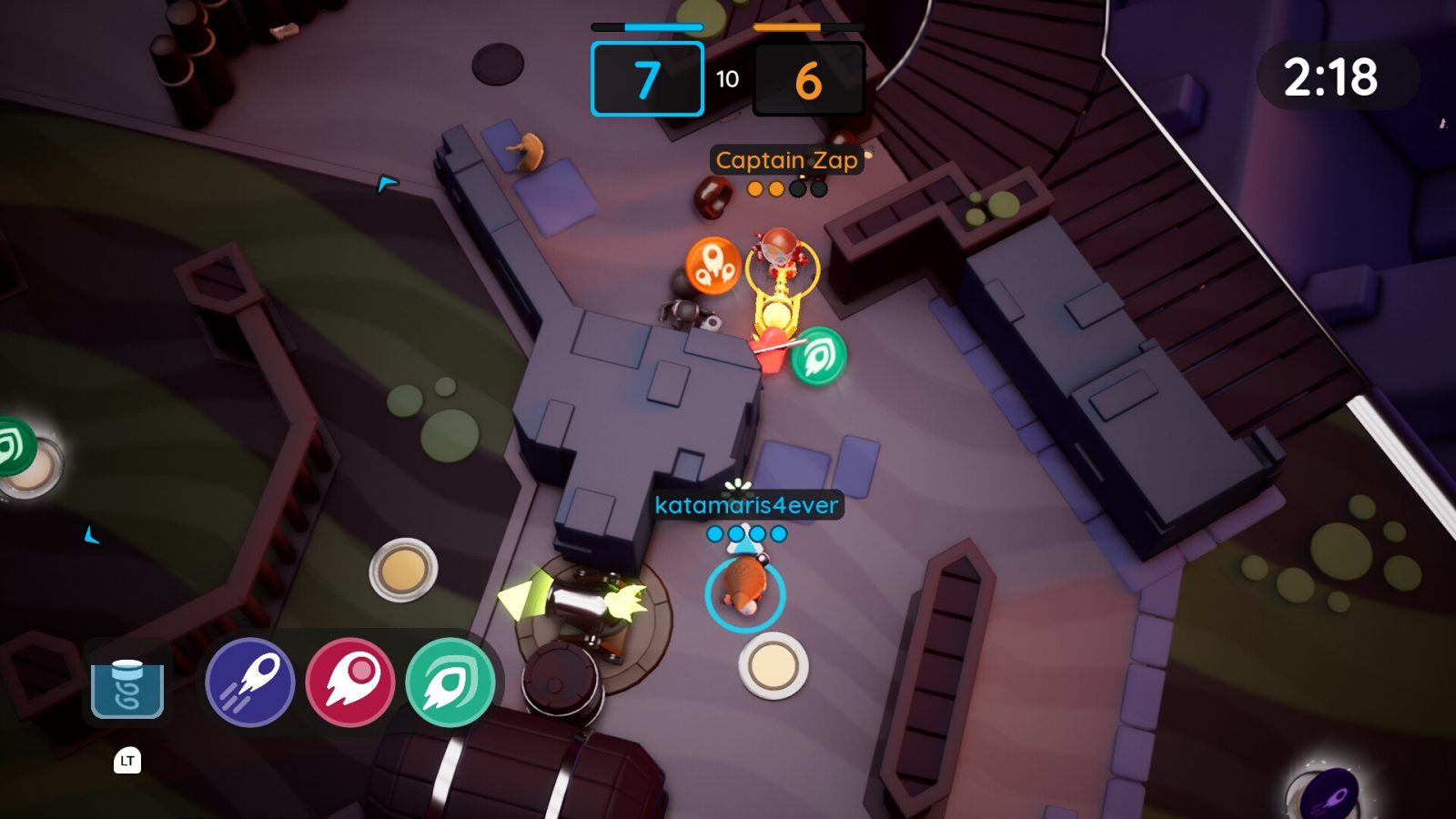 Outcasters is a twin-stick shooter for up to eight players, but with a twist: You can control your shot’s curve by flicking the right analog stick or mouse. You won’t be able to move your shot after flicking it, so you need to be creative with your aim. While it initially feels like a complicated way to shoot, this mechanic is quite entertaining thanks to taking advantage of a map’s terrain, which normally obstructs your shot trajectory thanks to moving walls or static boundaries. The maps are a top-down affair, but they’re colorful and wacky enough to be memorable, and also requires you to think outside the box when making a move. You can also defend yourself by hitting a projectile with your own, cancelling both attacks. It does take some time to get used to (and even then, sometimes it gets a bit too finicky to be 100 percent reliable), but the addition of this mechanic suddenly turns this from a run-of-the-mill shooter to a crazy party game.

You can pick up powerups like piercing shots or a bouncing projectile to add a fun twist to your regular flicked shots. In a fun twist, you can keep up to three powerups at a time, through either adding three different ones or building power on just one specific powerup three times. Think of the Diddy Kong Racing system, where you can get three levels of weapons, though should you die, you’ll lose all you have. Personally, I think that these two aspects of Outcasters create an innovative base that’s unlike most.

Currently, there are three modes in the game, which all support eight players; a free-for all Last Caster Standing mode, Team Battle, and Gold Rush. Last Caster Standing is just as it sounds like, a battle royale type affair where you must duke it out with seven other players to survive. This mode is accompanied by a Fortnite-like ring which closes in once enough time has passed, so you’re encouraged to eliminate other players lest you get cramped in a small area. It’s a pretty fun mode that’s admittedly over too quickly. 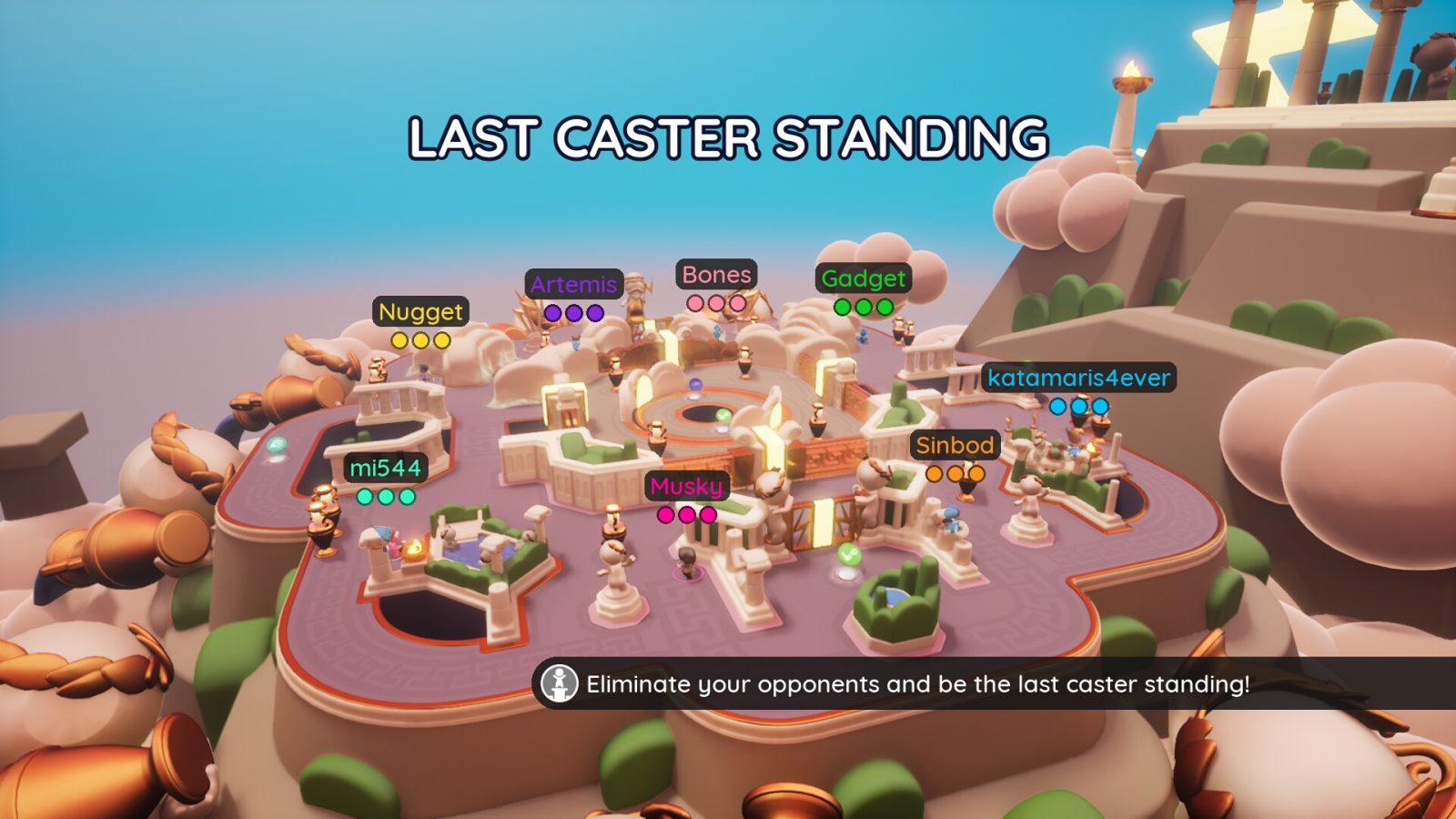 I love the tense battles that happened when I encountered a player, and with the small player count, it feels like every shot could be your last, even with three (or four) health points at your disposal. The complaint I have is that this mode is limited by the eight player count, which means that it feels barren once players start dropping. Sure, it skips the rather boring first part of battle royale games, but as a result, it feels shorter than usual. I would appreciate an extended lives system or more player support, but as it is now, Last Caster Standing is a fun little mode.

Team Battle, on the other hand, is where it’s at and the mode to play in Outcasters. You’re separated in teams of four and have to rack up 10 eliminations from the other team. This makes for a frantic race to kill as many opponents as possible, but everyone has unlimited lives here, so you just respawn should you bite the dust. This mode has the length issue solved, as one game is long enough to be satisfying but also short enough to say, “One more round!” and start again. While a weak teammate may compromise your win, considering there are unlimited lives for everyone, you can pick up their slack and eek out a win (or protect your comrades should they succumb to the curve-slinging prowess of your enemies). The eight player limit is used excellently here, as there’s a lot going on to create frantically fast battles but not enough to be overwhelmingly chaotic. Team Battle is a stellar inclusion and something I think could be continuously tweaked to be Outcasters’ mainstay.

Gold Rush is the black sheep of the three currently released modes, but that’s mainly because of how one one-sided matches are here. It’s sort of like a King of the Hill mode, as two teams of four try to bank 50 coins into a randomly activated bank location. Players will have to collect coins around the map first, and dying will make them drop any coins that aren’t banked. 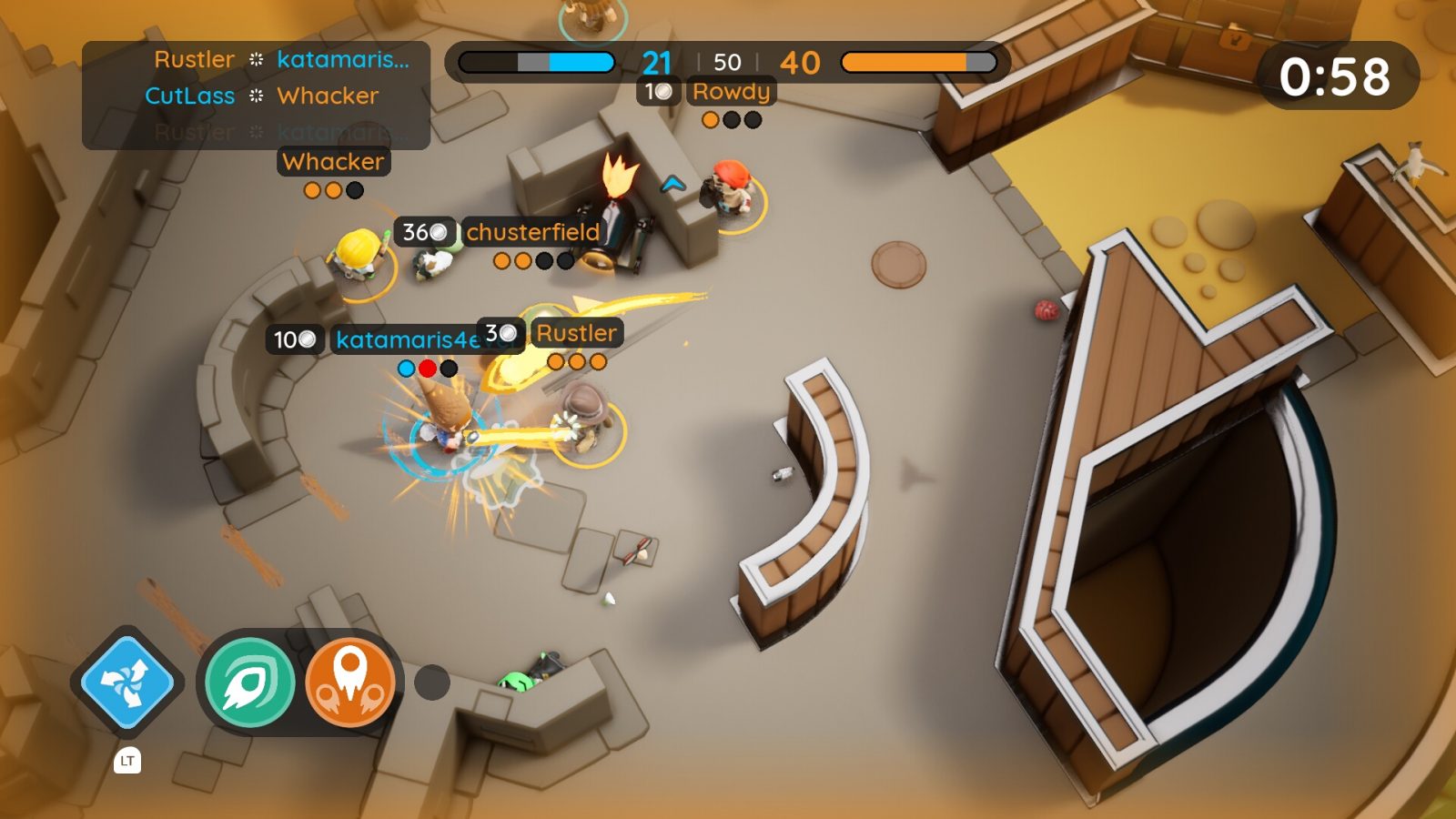 Unfortunately, it feels like whoever’s in the lead at the beginning of the match will end up winning with little chance for the other team to make a comeback, and I always feel like the bank gets contested way too many times (since if even one member of both teams occupies the bank, no one can bank coins). These matches are the ones that feel the longest, which is an issue when they feel one-sided for most of the battle. I’m sure others will have a good time, but I’d rather go back to Team Battle. These three modes are tied into a “Play All” public setting, which I think needs to be reworked to pick whatever mode you’re in the mood to play. I can see why this option is the default, but I would much rather play Team Battles exclusively rather than picking Gold Rush randomly and having less fun with it.

Alongside these modes are the customization options you have for your Outcaster. While there are a few preset options when you begin, you’ll need to unlock the rest by earning tickets you obtain by completing challenges. These are goals that you’ll be able to achieve like defeating opponents using a certain powerup or banking enough coins before a minute is up in Gold Rush. You can also set a powerup that acts as a special ability in-game, like leaping to avoid an attack or pushing nearby enemies or projectiles. I do like the amount of customization options here, but it seems like there’s just way too much stuff to unlock. I get that this is to encourage progression and playing often, but I’m unsure that anyone will want to get to level 590 to unlock a voice pack for their character. That said, I do hope that we get frequent updates and additions, and at least there’s an incentive to play everyday thanks to special daily challenges.

The more I use my Stadia account, the less I think, “hey, input lag and jittery frames.” This isn’t the most graphics intensive game on the platform, but Outcasters has a distinct cartoony feel to it akin to something like Fall Guys. It’s not aiming to be Cyberpunk 2077… erm, Doom Eternal in terms of graphics, and as such, it runs perfectly no matter the connection. Even though it’s quite fast-paced, there wasn’t a time when I felt like I died because of the system itself, and I feel like due to this game being made in-house, the developers knew how to use the Stadia technology to Outcasters’ advantage. 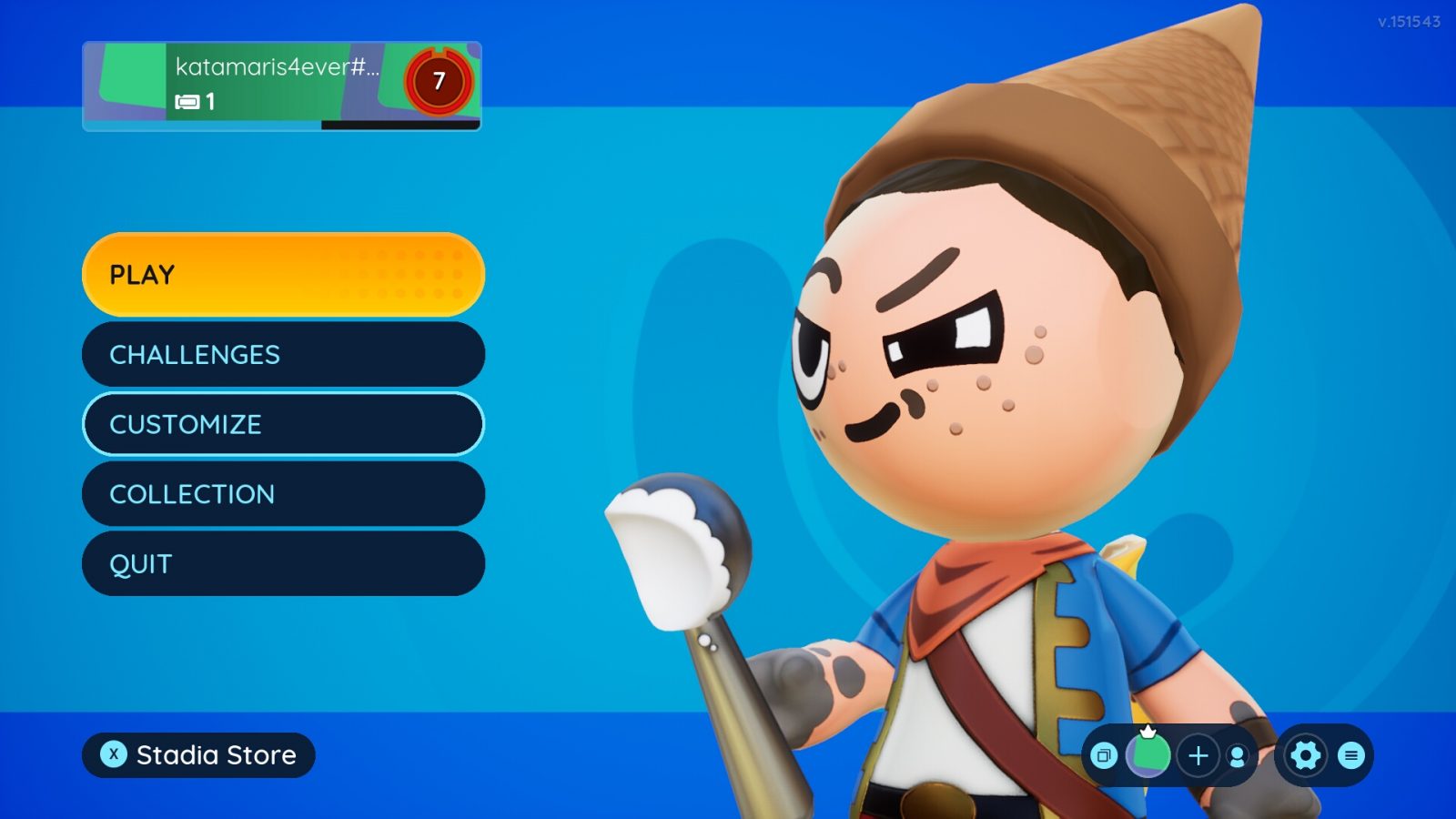 I do think that in the future Outcasters needs to have more modes or customization tweaks with the three included ones in order to increase longevity. I don’t mind the $19.99 price tag here due to the variety, but thankfully the game is currently free to claim for all Stadia Pro members, something that this game has over, say, Pac-Man Mega Tunnel Battle. This is the perfect strategy that Google could make for the game, as it’s an experimental title that works well as an exclusive yet can get more people playing because of its “free” offering with a Pro membership. The smaller play count means you don’t need too many people to play online publicly, and even grabbing three other friends to play against others in team battles is easy to do.

Outcasters is an outrageously fun Stadia exclusive with an innovative shot mechanic and wacky graphics. If you can get a party for four together, it’s an amazing time, but even playing solo with online randoms is a great treat too.

Elisha Deogracias is an aspiring accountant by day, freelance writer by night. Before writing for Gaming Trend, he had a small gig on the now defunct Examiner. When not being a third wheel with his best friends on dates or yearning for some closure on Pushing Daisies, he's busy catching up on shonen manga and wacky rhythm games. Mains R.O.B. in Smash. Still doesn't know if he's a kid or a squid.
Related Articles: Indies, Outcasters
Share
Tweet
Share
Submit