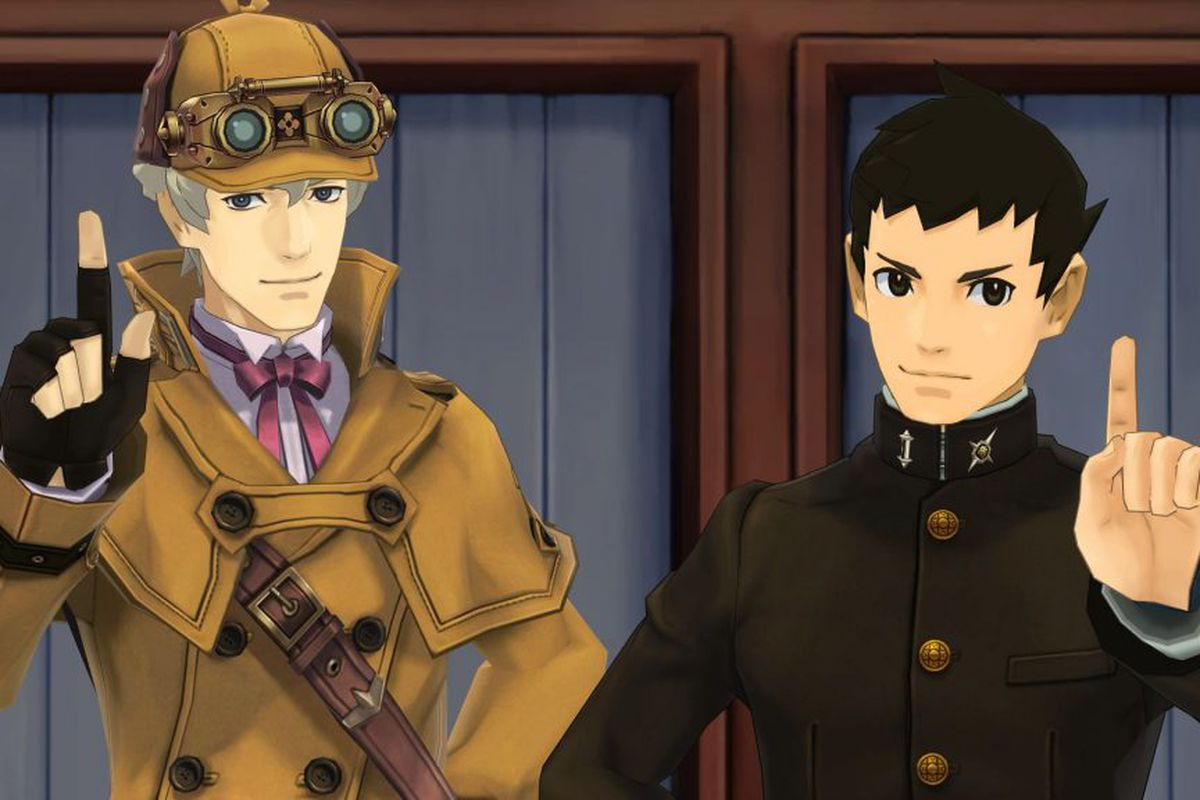 As a longtime fan of the Ace Attorney games, I was both excited and nervous when I first heard about The Great Ace Attorney Chronicles. I love Phoenix Wright and friends, and just couldn’t imagine playing an Ace Attorney game that was so completely detached from everything I’ve known and loved about the series. How foolish I was to doubt the masterminds at Capcom. With an interesting new setting, a fresh cast of memorable characters, and a whole slew of original mechanics, this duology of courtroom clashes is another must-play entry in the beloved series.

The Great Ace Attorney Chronicles takes place in the late 19th century during a pivotal moment between Japan and the British Empire. As a rookie attorney, you travel to London in an effort to learn the ways of their modern legal system and as a sort of cultural exchange between the nations. You play as newcomer to the series, Ryunosuke Naruhodo, a distant ancestor of the titular Phoenix Wright, who has a surprising amount in common with the fabled lawyer we’ve known for two decades. As he goes from novice to masterful defense attorney, you get to immerse yourself in the awesome new setting of 19th century London and take on some of the best cases the series has ever had. It’s seriously unbelievable how much these games keep topping themselves. 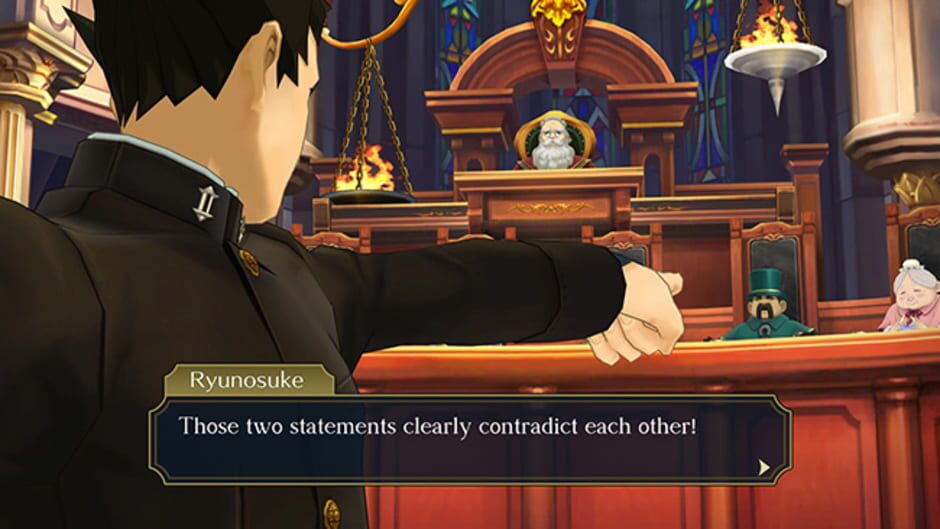 The new setting, characters, and story represent quite a bold departure from what we’ve ever seen from the series, but one that ends up working really well and serves as a refreshing opportunity for a whole new slew of characters to take the spotlight all at once. Unfortunately there are some cases where that opportunity isn’t taken full advantage of, like how Ryunosuke and Susato have quite a lot in common with Phoenix and Maya from the other games. Personally, I wish they’d have made them completely different from the characters in the mainline games instead of almost recreating their personalities.

As with previous entries on the Ace Attorney series, you spend most of your time in The Great Ace Attorney Chronicles investigating crime scenes, interviewing suspects and witnesses, and hashing things out in court. It features the same great, over-the-top writing and quirky characters you’d come to expect. True to form, Chronicles has truly memorable cases and standout characters. While Ryunosuke Naruhodo and Susato Mikotoba mostly serve as straight-laced punching bags to the otherwise insane cast of characters, newcomers Herlock Sholmes and his assistant Iris Wilson serve as sometimes brilliant detectives who are also highly error prone and jump to conclusions in ways that keep you guessing if they’re geniuses or just completely unhinged.

And of course, we get an absolutely brilliant new antagonist that lives up to the stellar history of success that the Ace Attorney series has enjoyed. Baron van Zieks (AKA the Grim Reaper of the Old Bailey) is a truly memorable opponent that you’ll square off against in the vast majority of cases. He looks like royal British aristocracy mixed with just a pinch of Castlevania vampire and puts his feet up on the prosecution bench, swishes around a chalice of wine, and is an absolutely perfect foil for Ryunosuke. Like many antagonists in the Ace Attorneys series, it becomes difficult not to love him very quickly, even as he viciously tears apart your arguments and is generally a very rude guy.

But in addition to doing all the things that Ace Attorney has always done well, Chronicles also brings some new features to the courtroom that help break up the formula to mixed results. One stellar addition is the Dance of Deduction, which features the loveable goof Herlock Sholmes dancing around the crime scene making observations that are sometimes clever and usually completely stupid. After he makes his farfetched claims it’s up to you to wade through his haphazard conjecture and make adjustments until you uncover the truth. Aside from being really entertaining and stylish, the Dance of Deduction also solves one of the major issues with Ace Attorney games: investigation pales in comparison to court cases and often feels like extended lulls to the courtroom drama and revelations. I actually found myself looking forward to doing battle with Herlock during investigations rather than trying to get to the courtroom as quickly as possible and that’s no small feat. 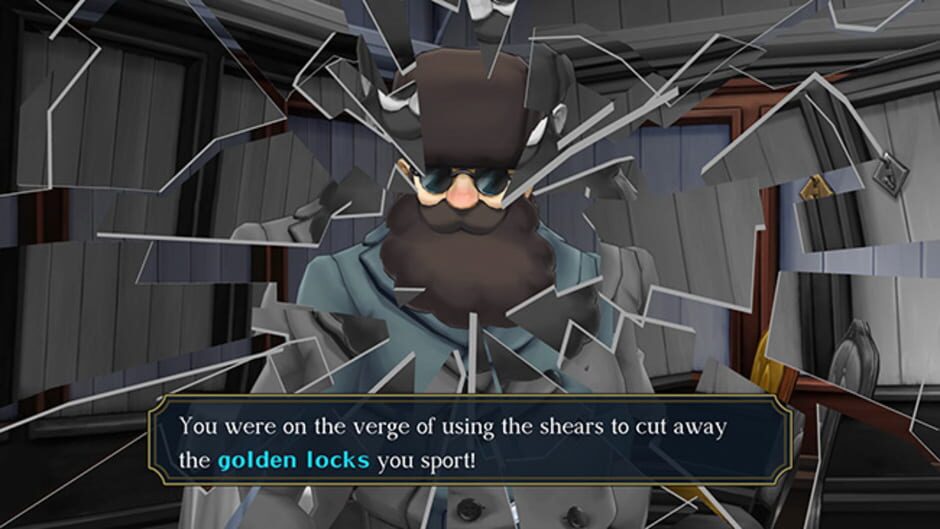 On the other hand, Chronicles also adds courtroom jury panels, which is an interesting idea, but mostly just serves as some extra fluff and padding to courtroom sequences. This isn’t the first time we’ve seen juries used in the Ace Attorney series; in fact, they played a pretty major role in the Apollo Justice game. But unlike in Apollo Justice they’re now fleshed out as a full minigame sandwiched in between some of the beefier courtroom battles. Now, instead of just worrying about the judge, you also must persuade a panel of jurors of your client’s innocence in segments called Summation Examination.

In key moments of a trial, each juror will give their current opinion on the case and point out key factors that might be able to shift their opinion, giving you a chance to re-evaluate the facts and occasionally stumble upon new facts and story developments that set up the next phase of the courtroom drama. Sometimes this is a nice change of pace with some clever puzzles to solve, but most of the time it really just drags out already significantly lengthy courtroom proceedings with more wacky characters you’ve gotta win over. It’s not actively bad by any stretch of the imagination, and in some cases actually works into the narrative in interesting ways, but largely they’re something many cases probably could have done without. 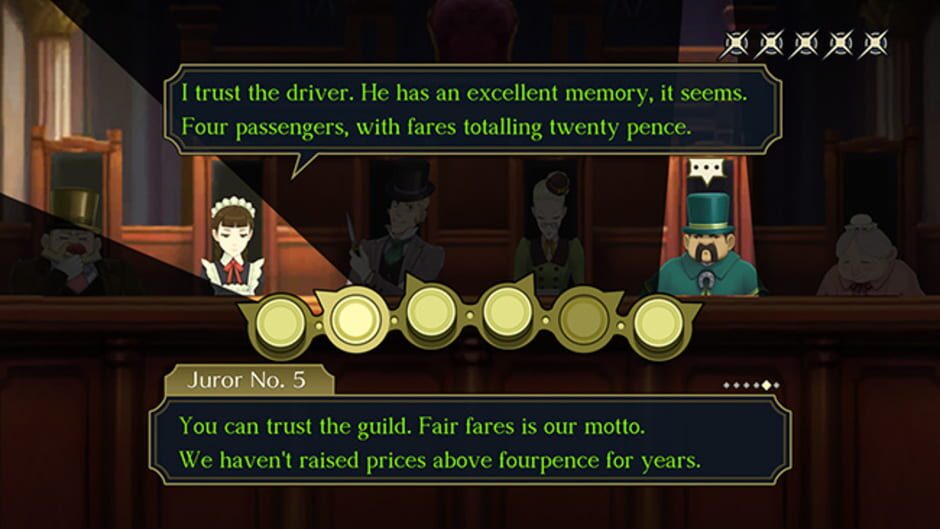 Chronicles also draws on a fairly unlikely source: the Ace Attorney/Professor Layton crossover, which borrows that game’s feature of having multiple witnesses on the stand at the same time. This helps add some much needed variety to cross examination, as you can now watch how non-speaking characters react to someone else’s statements, then press them on the issue to uncover new information. It’s a minor addition, but one that gives the otherwise straightforward process of pressing people and presenting evidence a bit more nuance.

The biggest problem with all the logic puzzles in Chronicles won’t be a surprise to veteran players though: most of the time the solution is just too obvious. There are exceptions of course, especially in each game’s latter cases, but it’s not uncommon to be several steps ahead of each of the characters as they peel back layer after layer to get to the truth. This can lead to some frustrating parts where you’re not sure which piece of evidence to present, because you’re already way ahead of the characters’ current understanding of the sequence of events. But like I said, this isn’t a new problem to the series and ones that fans (myself included) are likely to be quick to forgive.

The Great Ace Attorney is a duology that any fan of the series should play and also serves as a great entry point for newcomers. Whether it’s the great new story and characters, the high quality slate of cases, or the new mechanics that help break the usual mold of the series, there’s very little to dislike about this fantastic spinoff.

You know that jerk online that relentlessly trash talks you after every kill? That guy was probably Travis "Tie Guy" Northup. Competitive, snarky, and constantly wearing a tie, Travis has been writing his opinions about electronic media since he was a teenager, and is pretty much the only person to hold his opinions in high regard.
Related Articles: The Great Ace Attorney Chronicles
Share
Tweet
Share
Submit