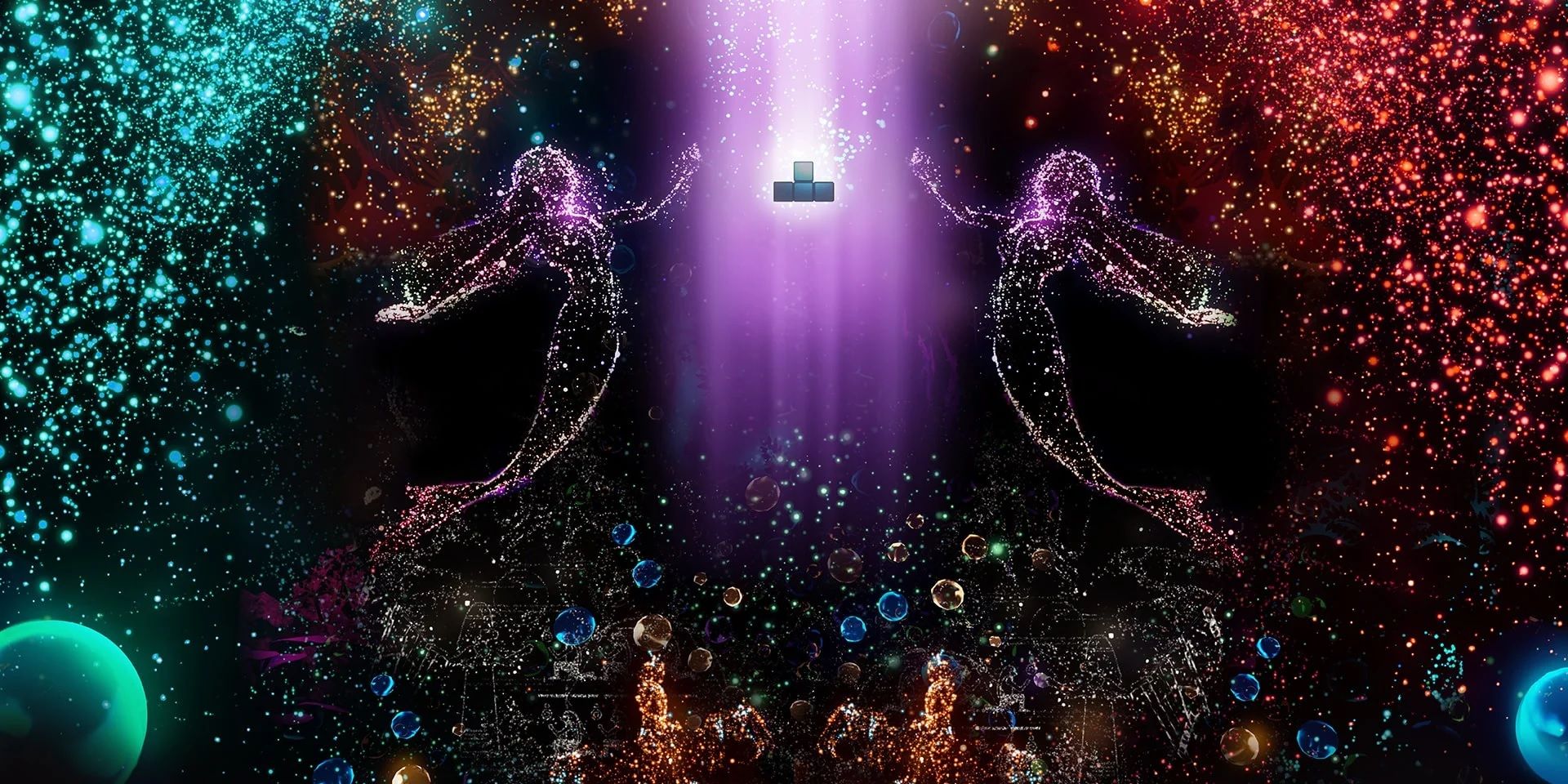 Tetris Effect: Connected continues the modern spin on the classic franchise. There’s still complicated concepts like T-spins, hard drops, and flipping Tetriminos forever just as it’s about to land, but the modernization hasn’t removed the simple core elements of Tetris’s design: easy on the eyes and catchy music. In Tetris Effect: Connected, those simple design concepts are greatly stylized. This game introduces improvised rhythms and beautiful visualizers that make an entrancing experience unlike any other Tetris; or any other game.

Tetris Effect: Connected is centered around the music creating a mood. That mood is amplified by the lights and scenery as well as the sounds created when using the Tetriminos. One song in the game starts quiet. The screen is black, but then a neon New York City look-alike quickly fills the background. Your Tetrimino appears and you move it towards the point where you want to drop it. The Tetriminos look like little kick drums – fitting with the level’s theme. As you move, rotate, and drop the Tetriminos, soulful jazz notes emerge and magically play along. Windows in the background flicker as you drop the shapes onto the field. After creating your first few lines,  a jazz band emerges, providing the rhythmic backbone to contextualize the piano that’s playing along with your moving Tetrimino. When you complete different tiers of lines, different sounds play and they sync perfectly with the background music. The concept never gets old. It’s a gleeful twist on an age-old game.

Some songs mesh better than others, but they all make you feel like you’re creating your own musical improvisations. You’ll find yourself spinning pieces just to see what kind of music you’ll create. Meanwhile, the background is doing all manner of flashes and color sprays, and as you progress further in the stage, the background and music change. It triggers the senses in a way Tetris hasn’t before and it’s wonderful. Most times you won’t notice all the effects happening around you since you’ll be focused, but it’s impossible to ignore the musical sensations exciting your ears. 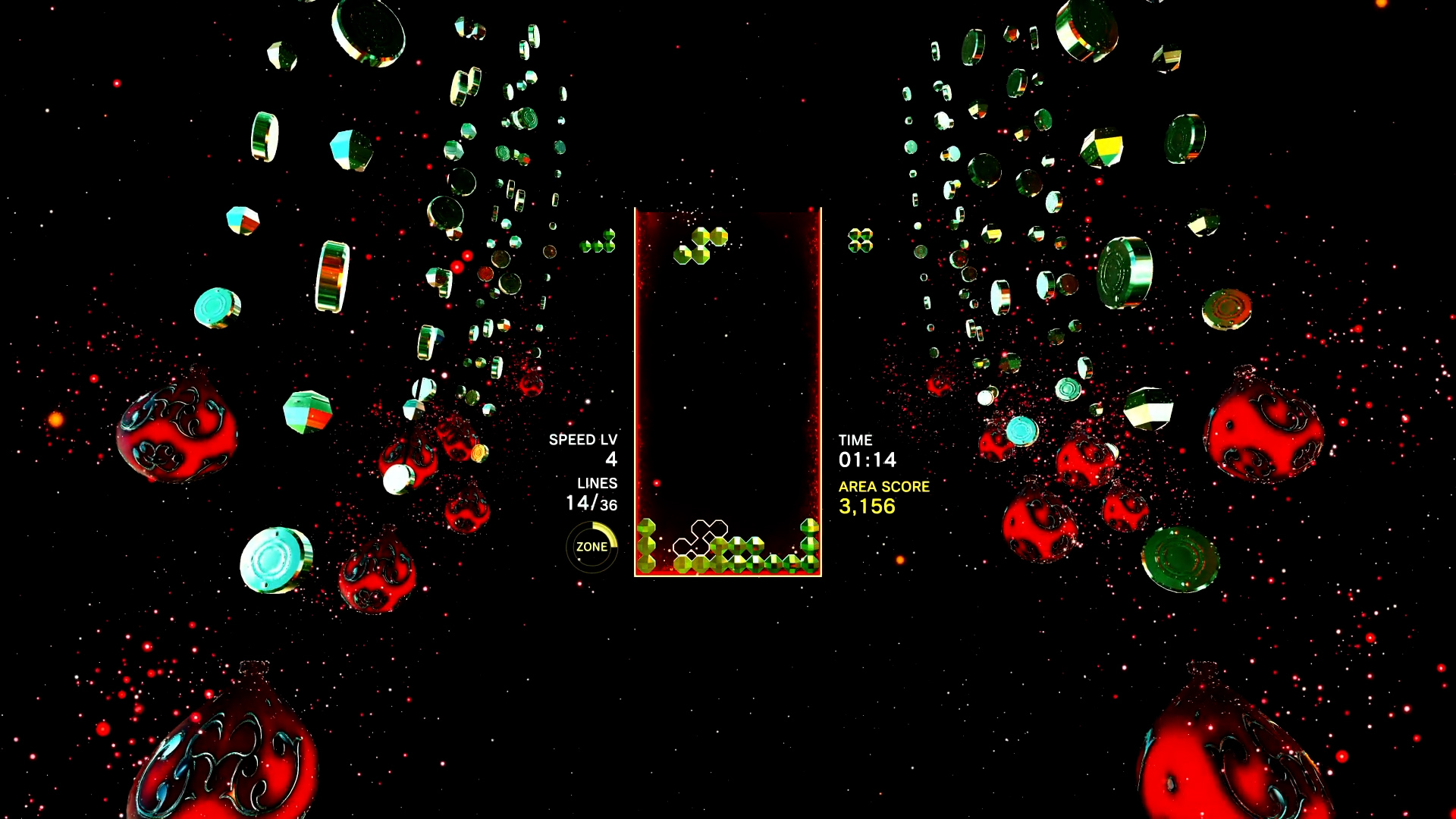 A variety of music genres are included: pop, jazz, hip-hop, techno, drum ‘n bass, world styles, and even ambient. You keep playing because you want to see how the field will change and how the music crescendos into an epic, yet, soothing experience. All songs contain a relaxing airiness to them, but some songs intensify your focus with thumping four on the floor rhythms. You can even play individual levels sorted by the type of songs you want to hear: relaxing, classic, adventurous, or focus, among others. It’s rare to have a video game combine sounds and visuals so seamlessly, and Tetris Effect: Connected manages to do it without overloading your senses or blocking your ability to see what you’re doing.

The biggest difference isn’t the music and effects, though. If you didn’t know, Tetris Effect: Connected is the multiplayer expansion for Tetris Effect. The new PvP modes include Zone Battle, Score Attack, and Classic Score Attack. There’s also one co-op mode called Connected. The PvP modes differ by what mechanics are available. Zone Battle includes all current Tetris mechanics including the “zone” mechanic that allows you to freeze your field and try to create as many lines as possible to increase your score and empty your field. Score Attack is modern Tetris without the “zone” mechanic, and Classic Score Attack takes it back to original Tetris – no T-spins, hard drops, and no possibility of infinite spinning. When a Tetrimino lands, it stays. Online connections are stable, and there’s no input delay on all Xbox platforms. However, Connected mode seems to have more input delay on Xbox One, where Series X and PC have zero input lag.

Speaking of, Connected mode is the best multiplayer addition. You matchmake with up to three other players against one A.I. boss. Each game is three rounds and the A.I. becomes increasingly difficult. The boss will try to muck up your fields by making your Tetriminos enormous, sending lasers through your blocks, making Tetriminos drop faster, and a variety of other difficult modifiers. But the team aspect comes when the collaborative “zone” meter fills. Each player’s field combines into one large field and you have to make as many lines as possible, taking turns dropping pieces around the field. It’s one of the most satisfying experiences in a team game. You’re playing with random teammates in syncopation and you’re working together, cleverly placing pieces around the combined field to do massive damage to the boss. It’s not often a game successfully lets you communicate simply based around what others are doing, but it’s only possible thanks to Tetris’s simplicity. 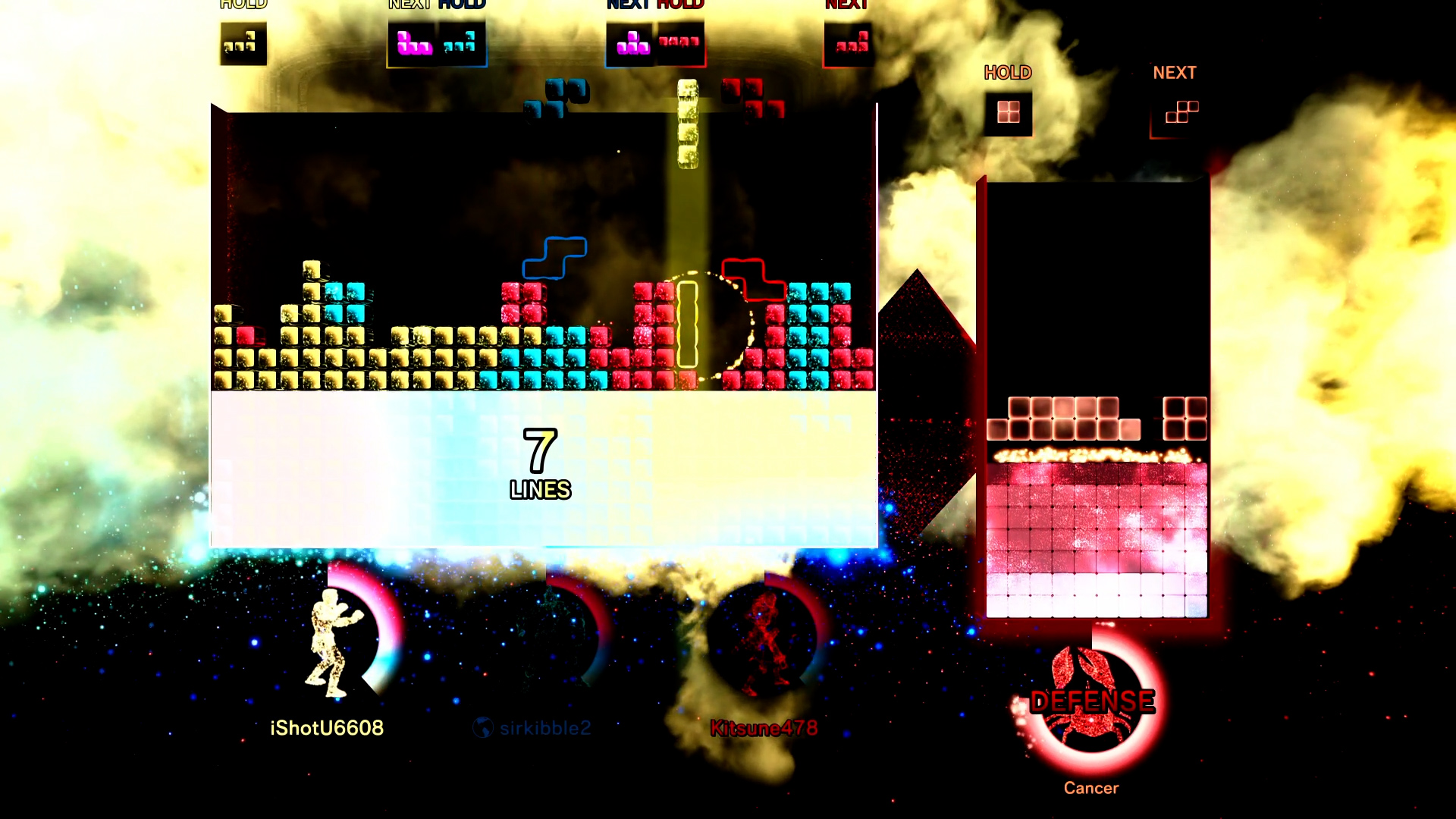 But there’s a noticeable flaw with the concept behind Tetris Effect: Connected, particularly the “we’re in this together” aspect. Only Connected mode exemplifies that idea. Every other mode is competitive, which is antithetical to connection; no matter how friendly the games are. Yes, we are, literally, connected because we’re playing online, but there’s no emotional connection during competition other than “good games,” “I’m mad I lost,” or “I’m happy I won.” Connected mode, though, opens you up to more encouraging and positive feelings beyond happiness, apathy, frustration, and satisfaction – feelings like “You got this,” or “We’re not out of this yet.”

What’s worse: the developers intentionally withheld explanations for certain mechanics so people could discover them on their own. That’s especially annoying in Connected mode. You end up playing with people that don’t understand essential mechanics to make life easier. It ends up making a round frustrating. I’ll just give you this super helpful hint. In Connected mode, if you’re in the “zone” and you get a purple Tetriminio, you can drop that piece over a gap, and it will drop all the way down to fill in the spot. So if you have the block and the right side of it lands on a solid but the left side of it hovers over an open area, that left side will drop down. That kind of knowledge is helpful when playing in Connected mode because it helps cover mistakes. But if no one knows that, it’s harder to work as a team, which deteriorates the camaraderie the developers encourage through the imagery and songs. It doesn’t feel like you’re connected when you’re holding back the potential of the team because you didn’t know how something worked. It’s thematically dissonant with the developer’s multiplayer vision – connected because you’re playing together, not because you’re working together.

Tetris Effect: Connected upgrades its musical rhythms and visualizations with fun multiplayer PvP, but the new Connected mode steals the multiplayer show with an exciting, energetic way to play Tetris that’s a welcome alternative to its competitive modes.