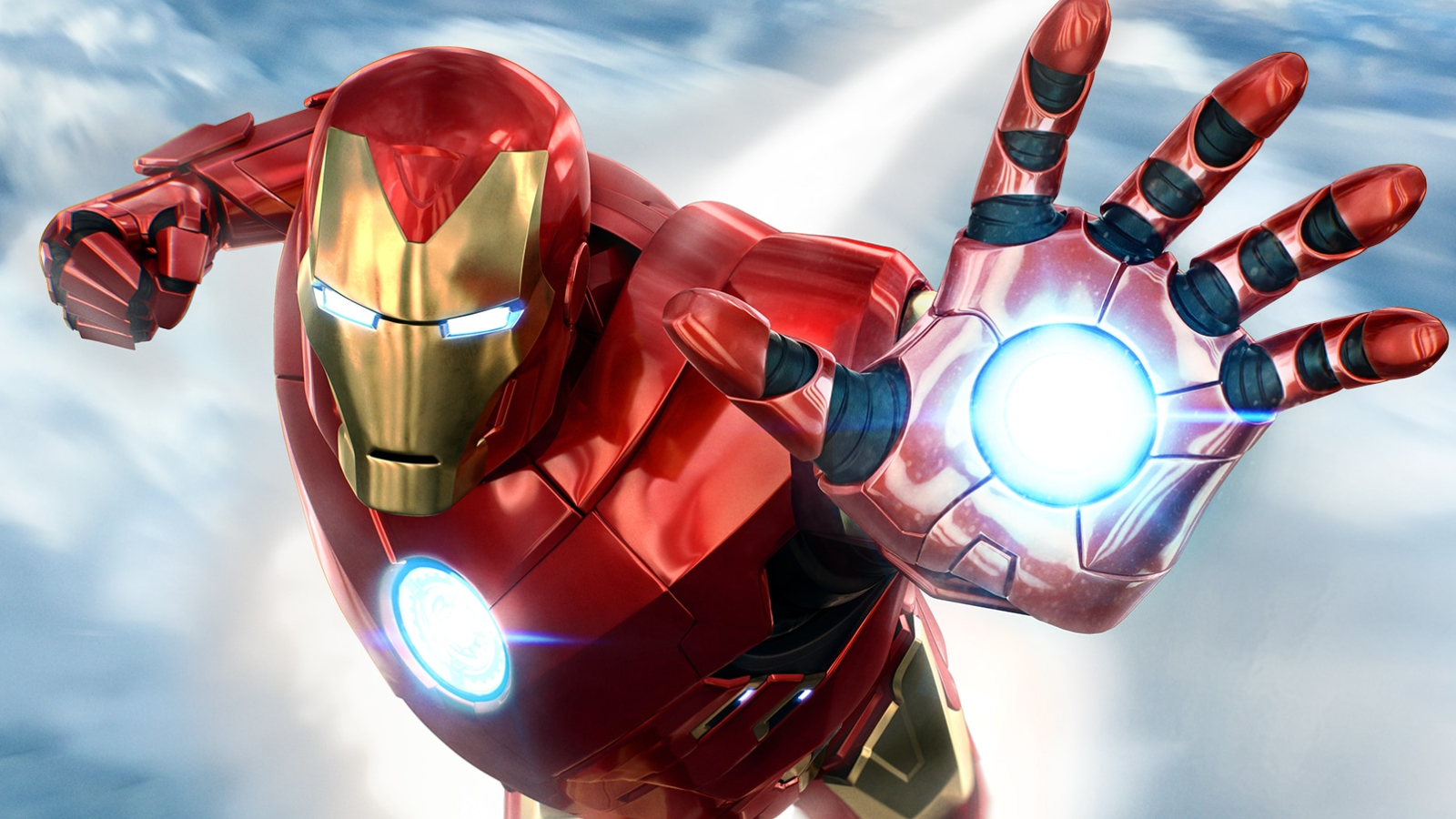 When we reviewed Iron Man VR in July of 2020, the hope was that we’d break free of the confines of the PlayStation VR and ultimately get to experience the world of Tony Stark with better tracking than Sony’s VR platform could offer. While the PSVR version was great, it was plagued by painfully long load times and a screen door effect that is persistent during any darker scene, waiting for the day that a jump to PCVR or the Meta Quest 2 would help immensely to turn a good game into a great one. Fast forward to November of 2022 and we finally have that chance. Once again we don the Mark IV armor (and many others!) and take to the skies.

Let’s address the big things first – as we are playing on the Oculus Quest 2, gone is the need for Sony’s forward-only tracking system. No longer is your motion a matter of blue lights in your living room. Developer Camouflaj (they made the game on PSVR, as well as the excellent République VR) have revamped the controls, allowing for a full 360 degrees of unhindered movement. Where the PSVR game relied heavily on snap turning to ensure your physical body stays put, even if your virtual one does not, there is no such limitation here. Frankly, it’s liberating.

If you’ve not played the game when it released on PSVR, the major story beats land the game somewhere around the end of the first Iron Man game. Tony has recently put aside the weapon manufacturing arm of Stark Industries and is focused on a role as peacekeeper and master of clean energy. Naturally, the road from “Merchant of Death” to philanthropic world protector is going to have some tribulations, leaving some skeletons in its wake. As such, Tony finds his previous life reemerging to haunt him in the form of a mysterious hacker named “Ghost”. Ghost isn’t interested in killing Tony, but instead wants to force him to relive some of the choices he’s made, as well as the consequences of those actions. It’s straightforward, but provides plenty of setup for the story to unfold.

I have to commend Camouflaj for their work on the PSVR version of this game as it provided as near a 360 degree experience as I’ve seen on that platform. With this version, that vision is realized, allowing the player to use their repulsors in any direction. Tony has a repulsor on each hand and both feet, so it will take you a moment to get used to flying, but that’s just all the more immersive as it’s similar to Tony’s first flight in the movie – clunky, dangerous, and absolutely awesome.

Once you’ve mastered the push/pull of the repulsors (palms to the rear jets you forward, pointing up pushes you down, pointing them down shoots you skyward, and facing them opposite is going to spin you in a hurry), you’ll be rocketing around the various maps in no time. The maps aren’t overly large, but are one continuous space. Some are larger than others, to be sure, with some setpieces like the Stark Helicarrier being real treats. Flying in, through, and around that incredible piece of tech is pure power fantasy.

The repulsors in Tony’s hands aren’t his only weapons, not by a long shot. Pointing your palms forward you can fire repulsor beams, sure, but your wrists carry a cornucopia of chaos. Rockets, anti-armor missiles, cluster bombs, and more can be loaded onto either your left or right wrist respectively, and if that’s not enough, you can hurl yourself at your target for a powered rocket punch. When your enemies are on the ground, you can also hit that three point hero stance in an “artillery drop” style attack that sends them flying. When things get overwhelming you can also unleash his powerful Unibeam chest weapon to cut through just about anything. As the game seems to take place between Iron Man 1 and 2, Tony is still mastering his tech, and that’s how I felt for the first 15 minutes or so of the game. After that, however, you’ll completely understand why Tony emphatically states “I am Iron Man”.

One of the best parts of this game is that the team at Camouflaj didn’t just lean on the easy track of having Tony fly from set piece to set piece. There are more than a few moments where Tony has to deal with his past, and the people he’s wronged along the way. His relationships with those around him, be it Pepper or even his own AI, are often fraught with broken promises and badly managed moments in his life. These, along with his garage where you can tune up your suit, provide a bit of respite to ensure the player won’t become sick flying around. Let’s get a little deeper into that for a moment.

I suffer from some pretty rampant VR motion sickness, so I’m always sure to cover it in my reviews for my fellow sufferers. With a game this frenetic and visceral, where you can easily be sliding one direction while looking in another, it’d be easy to imagine nausea being a problem. The game supports a variety of optional anti-nausea compensation including turn types and speeds, vignette levels, etc., but I turned them all off to baseline the experience for myself. In the end, I used a blend of snap-turn and smooth motion as both can coexist in this title. No matter how fast I moved (and boy can you move!), how quickly I banked, or how many times I pulled a 180 degree turn while firing my weapons all around me, I never felt any nausea. Even playing for consecutive hours didn’t trigger my nausea response. I was surprised at how well it worked on PSVR, and I’m happy to report that it works even better here – it’s nausea-free and smooth as silk.

Part of the game’s smoothness comes from the controls, and Camouflaj has these locked down nicely. Any issues present on the PSVR’s tracking are completely erased by switching to the Meta Quest 2. The higher fidelity of the Quest’s controllers provide pinpoint accuracy, something I saw reflected in my time trial missions. Missions that previously took me upwards of 2:30 took me an entire minute less. I also found my accuracy numbers to be far higher when the stars are tallied at the end of the mission.

Your missions are doled out courtesy of an AI-driven “threat-detection” globe in your garage. You can use this to revisit previous missions, train your flying or weapon skills, and of course tackle new missions. There’s roughly 8-10 hours of gameplay on offer if you don’t revisit any missions, though you’ll want to if you’d like to unlock all of the armor sets. You’ll earn research points with high scores in missions, and these will unlock equipment across six upgrade slots. These loadouts can be saved into two full suits ready for battle, allowing you to quickly switch based on your needs. These research points can also come from using your equipment in certain ways like punching a drone, blasting foes with the Unibeam, or unleashing certain weapon loadouts. Some of the unlocks are also cosmetic, allowing you to sport the Iron Patriot paint job, or other color swaps – I like the “molten” one personally.

The mission structure can occasionally feel repetitive, but with the freedom of movement it’s hard to fault it much. Honestly, it’s hard to care about having to do something more than once when doing it is this much fun.

When I reviewed the game on PlayStation 4 I had only two real complaints on the technical side – extraordinarily long load times, and the screen door effect that presents itself in VR HMDs. The higher fidelity of the Meta Quest 2 handles the screendoor problem easily enough – it’s a great looking game and takes advantage of the added power of the device. The second was the load times. On PlayStation 4 Pro they could be upwards of 2 minutes in some sequences.

This has been completely eliminated.

The loading sequences, at their very longest, are five seconds long. Most are closer to three seconds. I don’t know how much of a reduction that is without taking off my shoes to count, but it’s a lot. It speeds up the loading to the point where it’s a completely transformed experience. Having a solid state storage platform to use in the Meta Quest 2 does this game a great favor, and we reap the benefits.

I only ran into one extraordinarily minor issue with the game – the smallest bit of hitching. I never saw it during combat sequences, but occasionally you’ll get a hitch during the walk-and-talk portions as the scene loads in. It’s so minor that I can’t hold it against the game, but it is worth mentioning.

When a developer takes this long to port to a new platform it can be concerning. In this case, it’s time well spent. The power fantasy of playing as Iron Man is a visceral one that, frankly, comes to the surface every time I see him on screen. With the controls now fully free, it’s not a power fantasy – I AM IRON MAN!

With a fresh story, AAA quality gameplay, a solid amount of gameplay, and now complete freedom of movement in the controls, Marvel’s Iron Man VR is absolutely phenomenal. This is a major win for the Meta Quest 2, and a must-have for your library.

Ron Burke is the Editor in Chief for Gaming Trend. Currently living in Fort Worth, Texas, Ron is an old-school gamer who enjoys CRPGs, action/adventure, platformers, music games, and has recently gotten into tabletop gaming. Ron is also a fourth degree black belt, with a Master's rank in Matsumura Seito Shōrin-ryū, Moo Duk Kwan Tang Soo Do, Universal Tang Soo Do Alliance, and International Tang Soo Do Federation. He also holds ranks in several other styles in his search to be a well-rounded fighter. Ron has been married to Gaming Trend Editor, Laura Burke, for 21 years. They have three dogs - Pazuzu (Irish Terrier), Atë, and Calliope (both Australian Kelpie/Pit Bull mixes).
Related Articles: Marvel's Iron Man VR, VR
Share
Tweet
Share
Submit