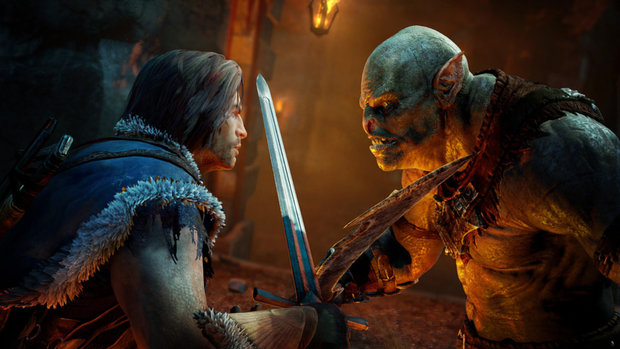 Hopping into a game based in the Lord of the Rings universe can be a daunting task. On one hand, you risk being lost if you are not invested in that layered fiction that J. R. R. Tolkien has made so popular. But on the other, that fiction is, as mentioned, layered and incredibly rich with life and pure fantasy folklore. Writing that form of game can be even tougher as you must balance that fine line between pleasing Lord of the Rings lovers and keeping the game approachable for others. Middle-earth: Shadow of Mordor is doing its best to balance that line, both in gameplay and writing.

Middle-earth: Shadow of Mordor is a game in which you will find yourself traversing an open-world map, scaling huge buildings, and engaging multiple foes at once. If that sounds familiar, it should, as many games in the past few years have lent their name to these concepts. Middle-earth: Shadow of Mordor does the same, but manages to somehow make it feel fresh at every turn of the corner, and every press of Y to counter enemy attacks.

Approaching Middle-earth: Shadow of Mordor, the Batman: Arkham Asylum style of combat had become more than tired. It still worked, but so many games had copied that form of action, it seemed played out. Middle-earth disagreed with that assessment, as they took the countering system and inserted it directly into their fantasy adventure. This system relies on you pressing a button a second before the enemy attacks, which then has you counter the attack and open up an opportunity for yourself. But to avoid the feeling of “been there, done that” is a layered upgrade system that continuously freshens up the combat.

This upgrade system contains a variety of possibilities that will keep you wanting to progress forward. Each option feels different enough to keep your eyes darting around the UI in hopes of finding the perfect upgrade to help build your character. Another thing that helps keep the combat fresh is the addition of a button which stuns the opponent and lets you unleash a flurry of combo attacks. Larger enemies can be invulnerable to this attack, but it still helps freshen up the scuffles with smaller enemies. A bow or daggers can also be used as ranged weapons. The ranged weapons do not mesh perfectly with the combat, but do help in larger fights, more specifically the bow. When you use the bow, time slows down and you can aim your shot with precision. These shots can also be charged up while time is moving slow, meaning they will be much more powerful. This is incredibly helpful in bringing down tougher enemies. It also helps that the controls are very responsive which only heightens the excitement of the combat.

Your other option for traversing many parts of the Middle-earth world is stealth, something pushed very early on by the game. These stealth sections have you sneaking around a surprisingly large amount of Uruk and doing your absolute best to avoid ending up in their line of sight. The stealth mechanics themselves are not very impressive and, at times, much more frustrating than they are rewarding. Ultimately, the controls feel much more suited to hand-to-hand combat and not so much in favor of gracefully navigating the surrounding environment.

The surrounding environment is classified as an “open world” but ends up feeling a bit smaller than most open-world games out there.  You can sprint from one side of the map to the other in around five to ten minutes, but that is also in thanks to the controls that help you effortlessly traverse the buildings in front of you. As opposed to other games like Assassin’s Creed, you do not have to look above you and find the correct handhold. Instead, your main character just climbs straight up where a handhold usually awaits. If one does not appear, it is best to just imagine it is there as Talion , the main character, will keep climbing no matter what. There are few objects that Talion will not climb.

Tougher enemies will come in bunches as you begin gliding down your twenty or so hours with Middle-earth: Shadow of Mordor. Middle-earth installs a Nemesis system, which has you targeting a multitude of Uruk Captains and, ultimately, going after their Warchiefs which are all a part of Sauron’s army. You gather up Intel on these villains by putting to use Talion’s newly found mystic abilities that allow him to interrogate enemies for information by placing his hand upon the Uruk’s head. This Intel will then lead you to finding out what the strengths and weaknesses of your targeted captain/Warchief are, such as being vulnerable to range, invulnerable to combo attacks, etc. Finding this information can be key to defeating these tough enemies, making getting to the point where you are able to challenge them a challenge in and of itself.

One of the most impressive aspects of the Nemesis system is how it highlights the constant power struggle throughout Sauron’s army. As time passes by, you will see random captains challenge other captains in hopes of climbing up the tree and getting one step closer to being a Warchief. You will also see random Uruk grunts get promoted if you somehow find yourself dying by their hand. This means that even if you kill off a majority of the captains, there will always been more Uruk just waiting to take their position and fill the hole you just created in Sauron’s army.

While going through the story is the normal mark of progression in a game, that tends to take a backseat in Middle-earth: Shadow of Mordor as you focus your attention on killing the right captain in order to keep them away from protecting your ultimate target, one of the five Warchiefs. The five Warchiefs prove to be a very tough challenge that need preparation if they want to be defeated. This preparation and challenge ultimately make these fights feel like large, important encounters that ooze intensity at every swing of your sword. The battles are exciting and easily some of the best in an action game this year.

Middle-earth: Shadow of Mordor takes a very light approach to the storytelling in order to not scare of people that know little about the Lord of the Ring universe. You are slowly introduced to characters like Celebrimbor, Sauron, and Gollum, with backstory being thrown in intermittently. The plot device that tethers the Celebrimbor and Talion characters is a very impressive one that helps develop a very strong relationship between the two. They end up delivering some of the most memorable lines in the game as they experience a variety of situations with one another.  The writing spans over more than just those two, however, as all characters have very sharp writing that never ceases to impress.

Unfortunately, the over-arching tale does not impress as much as hoped for. While it could be due to my lack of expansive knowledge for the Lord of the Rings universe, I found many of the spiritual and sci-fi elements to fall flat. These story beats appear multiple times throughout Middle-earth: Shadow of Mordor and tend to shine light away from the strong characters, which ends up being to the game’s detriment. While it is far from a bad story, there is a lot of untapped potential in Middle-earth: Shadow of Mordor just waiting to be mined in a possible, and likely, sequel.

As we get further into the newest generation of video game consoles, you expect the software to begin looking more and more impressive. Middle-earth: Shadow of Mordor looks very impressive, but lacks that jaw-dropping visual that such an expansive universe can produce. There is a bit of screen tearing in the PC version which dampens some overall well-crafted environments. Thankfully, you can fix this by adjusting the VSynch in the graphic options. The Uruk design is by far the most impressive aspect of Middle-earth’s visuals. Each and every Uruk looks fantastic with an amazing amount of attention to detail. The chains and piercings attached to Warchiefs and captains add life to their appearance, and highlight their high rank. While the overall environment may lack that technical brush which makes the visuals near perfect, it does feature a great atmosphere and some astonishing character design.