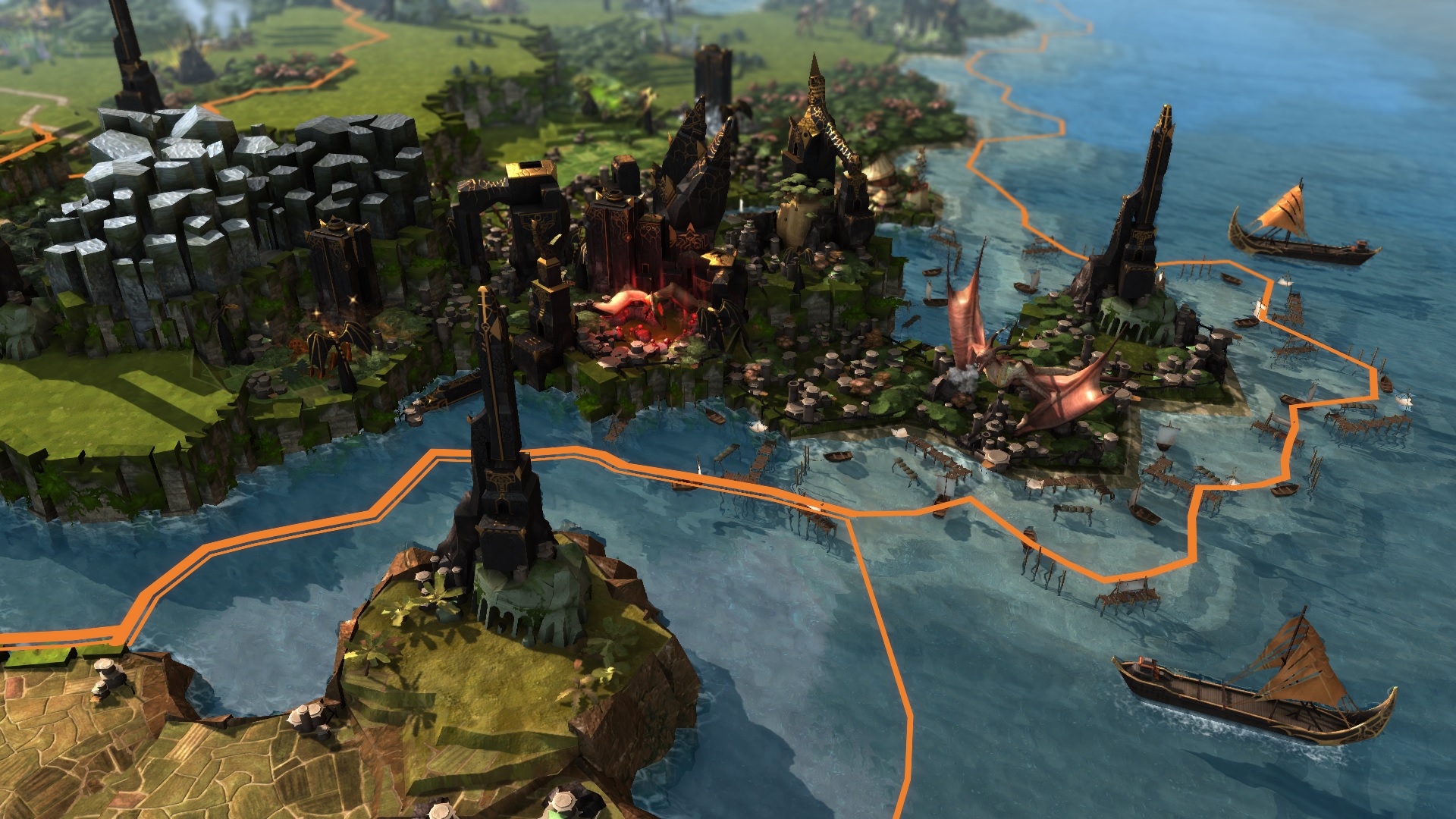 Urban Dictionary defines the Civilization effect as “the ability of any game of the Civilization series to produce an addiction sufficient to warp space-time around the player; results in being tardy or accidentally pulling a video game all-nighter.” This phenomenon has been special to Civ games, but it also perfectly describes my first few days with Endless Legend.

Made by Amplitude Studios, Endless Legend is a 4x strategy game set in the fantasy world of Auriga. Many different races and factions inhabit this hexagon-based world, and it contains plenty of resources and anomalies. There is no campaign, but each of the eight playable factions is driven by thei

Armies tend to be composed of a variety of units, from vilesnakes to giant titans.

r own agenda, which the player fulfills through quests. Quests can be given by minor factions, random encounters or as part of the factions’ storyline, but they tend to be the driving force for much of the early game.

The factions in Endless Legend all have a great deal of lore, and are very focused thematically. The Wild Walkers are probably the most standard, or Civ-like, of the factions. The Walkers make nature their home and get bonuses for building and fighting in forests, and their story revolves around building a “tower to the heavens.” The really interesting factions are the ones with specific limitations and bonuses. The Necrophages’ story is one of chaos and carnage, as they seek to sate their hunger on all of Auriga. They have few diplomatic options, but turn their cities into monstrosities of production that can churn out unit after unit. The Cultists were also a favorite of mine, a league of devoted zealots whose story is told through the eyes of an outsider gradually being converted as you complete quests. The Cultists can only have one city and are forced to raze any others they conquer; their expansion comes in the form of converting Minor factions (think city-states from Civ) to their fanatical cause.

Unit diversity is both small and varied. I know, that’s a borderline contradictory statement, but hear me out. Each major faction has three different base units they can build: a ranged unit, support unit, and some form of base infantry. Heroes can be recruited and leveled up, gaining experience either on the fields of battle or acting as a governor of one of your cities. Minor factions can also be assimilated into your empire in order to gain build permissions for their special unit, which could range from a centaur or orc to a towering demon.

The option to customize units is an innovative methods of upgrading your forces.

While base unit options are low, the variety comes when you research technology that lets you create weapons, armor and accessories from the resources found around Auriga. When you want better archers, you can choose to make a new archer class and equip them with the best steel you can make, rename them, and start production immediately. It was a nice touch to make upgrading units feel so personal, and I felt proud when my upgraded army of Fanatics rolled over an enemy city with little resistance.

Combat is an interesting point, because Endless Legend takes an odd approach to warfare. When armies collide, they spread out into the surrounding land as individual units and the game turns into turn-based combat. Nearby armies are brought in as reinforcements, but the fights are usually over quickly. I was surprised, however, by the lack of options given to me for combat. Units can only move and “target” enemy units, which made most fights feel anti-climatic.  Victory didn’t feel like a strategic goal, but rather just a numbers game. That being said, the actual combat looks gorgeous, with animations and attacks looking visceral and unique to each unit.

The art for this game is wonderful, as it looks almost like a well-painted board game that has come alive. The sound, however, is hit-or-miss. There are few distinct sounds, and often sounds will play for no reason, freaking out certain players when they think their city has suddenly fallen under siege while panning across the map.

The research tree is huge and varied in the early eras, but is lacking in the later tiers.

The map is beautiful, but there is an issue with actually navigating it. I often had trouble finding where the objective of my quest was, because of both unspecific text cues and the difficulty of relying on a glowing pillar of yellow light to find quest locations. The light from heaven approach is overused in games for a reason, as it is a helpful way of giving the player direction, but many resources and buildings in Endless Legend have a similar yellow glow over their hex squares. An option to snap the camera to quest objectives or even named areas in quest text would have been a very helpful option.

The game’s progression is also very jumpy, and suffers from the issue that most Civ games have historically suffered: a rather uninteresting endgame. There are multiple methods of victory, through expansion, military supremacy, science, diplomacy or building your faction’s wonder. The first 200 or so turns leading up to the endgame are fantastic; most factions are usually at each others’ throats, expanding and vying for minor faction control, racing to the newest tech and leveling their heroes. When you know what victory condition you want to go for, however, the game slows down incredibly. It is a little too easy for scientific empires to race to the end unopposed, and other AI players seem to not care that a game-winning wonder is being built.

Despite these flaws, I have still found myself putting hours and hours into the game. While it isn’t a perfect game, it is still fun as hell to play. I found myself constantly wanting more; more insight into these crazy factions, more cities to conquer, more heroes to gradually build into avatars of my empire. This is one of the more interesting strategy games to come out recently, and while it is a little rough around the edges, Endless Legends is still worth any 4x strategy fan’s time.

Endless Legends tries to overcomes flaws by focusing on strengths. Unique factions, in-depth customization and beautiful art will keep you hooked and wanting more. It isn’t perfect, but it is still a solid strategy game.