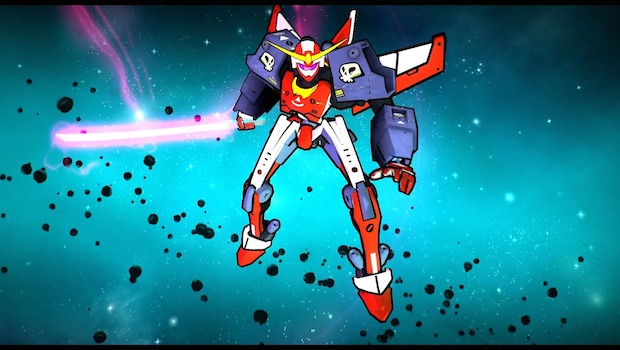 Galak-Z: The Dimensional is much like the empty void of space. Cold, unforgiving, and apathetic to your outcome, it simply exists for you to conquer or fall to again and again. Blending the challenging repetition of the roguelike genre with the mechanical dexterity necessary to be an ace dogfighter, Galak-Z: The Dimensional might be the most fun I’ve had in failing so far this year.

As the last fighter pilot alive after an Imperial ambush, you (as the daring A-Tak) are the sole hope for stopping the Imperial attack on Earth and saving mankind. With your trusty guide Beam and the battleship Axelios providing support, you must go on a series of missions, each increasing in risk, for the greater reward of stopping the Imperial invasion.

Grappling objects and guiding them into the warp beacon becomes one of the more common mission objectives.

The story of Galak-Z is broken into seasons, four of which are currently available and a fifth to launch at a later date. Each season acts as a “dungeon” of sorts, containing five missions that culminate in a spectacular finale. While the final mission of a season will always be the same, the first four are procedurally generated, with objectives ranging from destroying bugs or enemy weapons to stealing a data cube or salvaging large heaps of scrap metal.

The sights and sounds of Galak-Z feel like they’re pulled right out of an episode of a classic space anime, with over-the-top explosions and plenty of rocking electric guitar riffs to accentuate every moment. While there isn’t much of a plot to follow here, it takes the route of a typical action anime and sticks to the basics: finding situations where the protagonist has to get in a starship and fight for his life.

Plenty of equipment upgrades and different shot types are available.

Your ship, the titular Galak-Z, is fairly straight-forward to control, with basic forward and reverse thrusters, primary lasers and missiles, and as you play through the first season you unlock a number of tools like strafing thrusters (that oddly only strafe in one direction) and a jaunt that lets you roll out of enemy fire. Once you reach the second season, you’ll also unlock the ability to transform into a mech, losing your long-ranged weapons and jaunt for a laser sword, grapple hook and deflector shield.

The Galak-Z isn’t a one trick pony, though. As you progress through each mission, you’ll find upgrades hidden in crates which will boost your ship’s capabilities in a number of ways. Some are your standard extra health or shields, or increasing the speed of your missiles’ targeting system. Others change the shape of your laser, or give it unique properties like a bouncing shot or elemental damage.

What you end up with is a ship that starts out as a stereotypical starfighter, but gradually evolves into a personalized fleet destroyer. While upgrades are found in the world, you can also find blueprints, which unlock upgrades to be purchased from the store in future runs – after only a few runs of each season, you’ll have likely accumulated a wealth of options and be well-versed in what upgrades are crucial to your playstyle.

Sometimes diving headfirst into enemies in mech mode is the best option.

While the starfighter’s upgrades are cool and fun to use, the mech stands out as just incredible gameplay. The sword can be used in a series of slashes or one charged attack that homes in on your target, ripping up their shields and opening them up to a quick succession of attacks at the cost of leaving yourself vulnerable while charging. The deflector shield lets you bounce back enemy lasers, turning the enemy’s’ guns on them. Grappling objects is addicting and as fundamental to gameplay as the Grav Gun was in Half-Life 2, creating a tool that captivates you with endless possibilities. Grab an angry bug and fling them at oncoming space pirates to disrupt their assault. Snatch an enemy to bring them in close for a few hits of your sword, then fling them into an explosive barrel nearby. You can even grapple an asteroid or piece of wreckage and cling to the underside of it, using it to shield yourself from enemy sight lines and pass by undetected. Simply put, the mech gameplay in Galak-Z is some of the best in recent memory, and mastering the tools it offers will make you feel like an immortal fleet-destroying ace pilot.

The pause screen is wonderfully nostalgic.

That said, death is still ever-present, and the best runs can still be laid to waste in a few moments. Dying in Galak-Z means losing all progress within a season and returning to the first mission, without any of the upgrades you’ve acquired. It’s brutal at times, setting you back incredibly far when you’ve fully decked out your starfighter only to get caught up in a three-way fight and landing on the losing side of it.

Developer 17-BIT balances this out by gradually trickling Crash Coins to you, a currency that persists through death and has two run-saving applications. When you die, you have the option of spending five Crash Coins to restart the mission, with all your equipment locked in a crate somewhere in the level. You’ll have to find that equipment with just a base starfighter, but it means you get a second shot at completing the season if you can surmount the challenge. Otherwise, Crash Coins can be cashed in at the start of a new run for Salvage, the currency of Galak-Z, and spent at Crash’s shop to buy upgrades, letting you buy back the crucial abilities you need to start another run.

Though it is punishing, there’s a level of mechanical difficulty that Galak-Z reaches that can’t be found in many other places. The Galak-Z is difficult to handle at times, but not in an unresponsive way; mastering the application of every tool available is a struggle, but one that will reward you with complete mastery and a side of feeling like the badass lead of a Saturday morning Gundam episode. Launching off a barrage of missiles, lighting up a number of the smaller ships and then transforming into mech mode and diving headfirst into an enemy is thrilling and ever-so rewarding. You’ll likely feel anxious, stressed, and tense as a pincushion when locked in a dogfight with some of the more dangerous enemies Galak-Z has to offer, but the final release of endorphins after the final shot lands and your enemy explodes in a cloud of cartoon fire is liberating.

Even one ship could be the death of you if you’re not careful.

Most roguelikes emphasize learning the process and exploiting the system, rewarding the players who can effectively game either the AI enemies or the mechanics in place to eke out the most rewards possible. Galak-Z opts to instead reward mechanical skill — there is rarely a time when you reach overpowered status, and you are always vulnerable to any and every laser and missile coming your way. Upgrades help, but Galak-Z does not give you the free passage to win through add-ons and lucky RNG. You have to earn each advancement, and while that might be maddening to some, others will find their dedication to mechanics over memorization rewarded.

The only other downside to Galak-Z is that once you’ve spent time getting through each of the five seasons, there isn’t much to keep you going afterwards. You could try hunting down every blueprint, but besides the chance to play a new level that might be a little different, there aren’t any additional challenges or NG+ options to seek out that I’ve found yet.

Large expanses of space are broken up by small planets, similar to dungeons.

When Galak-Z: The Dimensional has you careening between asteroids, dodging missiles and slashing enemies with a giant laser sword, it stands strong as one of the best dogfighting/mecha games out. It even implements a level of stealth that is surprisingly intuitive, without ever compelling you to do so in the first place – every approach is viable, and all that matters is making it through to the next season with your ship in one piece. If you dig spaceships and mechs, and don’t mind a little bit of controller-breaking frustration now and then, Galak-Z is a no-brainer.

A unique concept, brilliant execution and excellent mechanics make Galak-Z: The Dimensional a stellar title. Perfectly capturing the Gundam pilot inside all of us, this is must-have material for anyone who’s always wanted to fly away in a mech and take down some imperial scum.