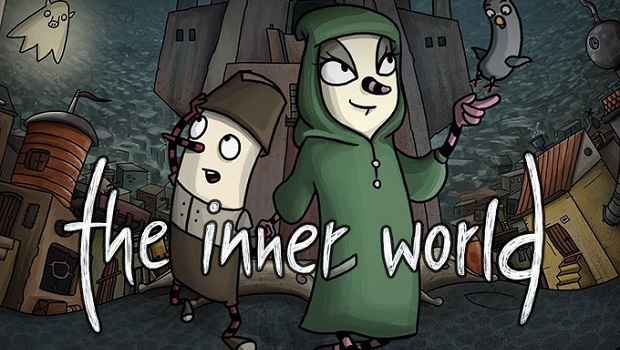 Playing The Inner World is a frustrating experience. This isn’t just because it suffers from an amateur lack of polish, but because even when the level design is unforgivably nonsensical, its whimsical world continuously teases you with the promise of a better game. Ultimately, Studio Fizbin’s first foray into the point-and-click genre is Frankensteinian — it’s functional, but it’s precipitously stitched together and not that pretty to look at.

At the very least, this monster has all the heart of an adventure game — a fantastical world filled with over-the-top characters. Asposia is an inside-out planet where everything outside (space, basically) is soil, and air enters the hollow earth through giant wind tunnels. The strange city is absolutely bubbling with personality, from its zany inhabitants to its quirky mythology. Meeting new characters, like the local barmaid whose husband has turned into a coat rack or the hungry green Gorf who’s looking for a tasty snack, and discovering new, always stranger parts of the city become the main incentives driving you through the otherwise predictable story.

The Inner World’s art and character designs are clearly the stars of the show.

Unfortunately, the main characters lack the same charm. You play as Robert, an utterly naïve, literal-minded ward of Abbot Conroy, an egomaniacal monk who protects the last working wind tunnel from dragons that are turning Asposians to stone. An accident drops Robert, who’s never set foot outside Conroy’s fortress, into the city, allowing the player to see the world with fresh eyes as Robert comments on things in his environment he’s seeing for the very first time. While his ignorance makes narrative sense, it makes Robert far less interesting than Asposia’s host of oddball denizens.

Alas, The Inner World’s entertaining characters are a feint — deceiving players into thinking that this is an adventure game worthy of joining its brethren in the long-running adventure game genre.

Like other adventure games, you explore respectably hand-drawn environments looking for items you can combine and use to solve puzzles, but this primary gameplay hook fails, and the game with it. Puzzle solutions are obscure to the degree of becoming unfair, demanding players come to completely illogical conclusions in scenarios that can only be described as guesswork. How am I supposed to know that pouring Nodtarine Juice on a worm in the ground will make it drunk, allowing me to use it as an elastic substitute for a slingshot? Or that using a fish on a swivel chair will oil it so it can spin?

Put the stick in the hole to catch the cotton ball. Because that makes sense.

Even more egregious, the game makes fun of you when you do attempt to use objects in clever ways, with Robert making comments such as, “Now you’re just guessing.” This is a complete insult to players when they’re given no intelligent clues to reach most puzzles’ nonsensical solutions. The Inner World provides a comprehensive help system in the pause menu, but having to constantly reference it didn’t empower me like puzzles are supposed to. The game made me feel incapable rather than accomplished.

All that said, Asposia isn’t completely devoid of novelty. A handful of puzzle scenarios are quite creative — unfortunately, they’re the exception rather than the rule. This sparsity applies to a woefully underutilized puzzle mechanic introduced later in the game: Robert has a flute for a nose and can play music that interacts with the environment, but this mechanic is only used once or twice before it’s completely abandoned. The lack of puzzles respectful of players’ intelligence and the omission of the flute mechanic are a double whammy that makes The Inner World feel less like a piece of art and more like a sketchbook study.

The Inner World’s amateur polish is palpable throughout the experience. For example, to interact with objects in the environment, the game employs a frustrating tool that forces you to cycle through every object around you using the controller’s bumpers. Frustratingly, the items I always wanted were unfailingly the last items I had to cycle through — something that could have easily been remedied by the inclusion of a manual cursor. New areas take too long to load, cutscenes suffer from awkward audio breaks and on two occasions the game completely crashed during my playthrough. This is hardly forgivable considering the game’s 5-6 hour length.

The Inner World has the heart of an adventure game, but its execution can only be likened to a dilettante’s exploration of the point-and-click genre. Asposia is an inventive world full of personality, but even despite the game’s goofy nature, the puzzle design is unfair, and frankly, indefensible. The game is a respectable dabbling in the genre, but when Robert’s adventure finally reaches its conclusion (and it will have you saying ‘finally’), don’t expect to feel like you accomplished much of anything at all.

Hunter Wolfe just graduated with his B.A. in Communication/Journalism from Shippensburg University and has nearly four years of professional writing experience. His content has been featured on sites like Rolling Stone's Glixel, Destructoid and The Artifice. You can check out his full portfolio at: www.hunterawolfe.com.
Related Articles: The Inner World
Share
Tweet
Share
Submit