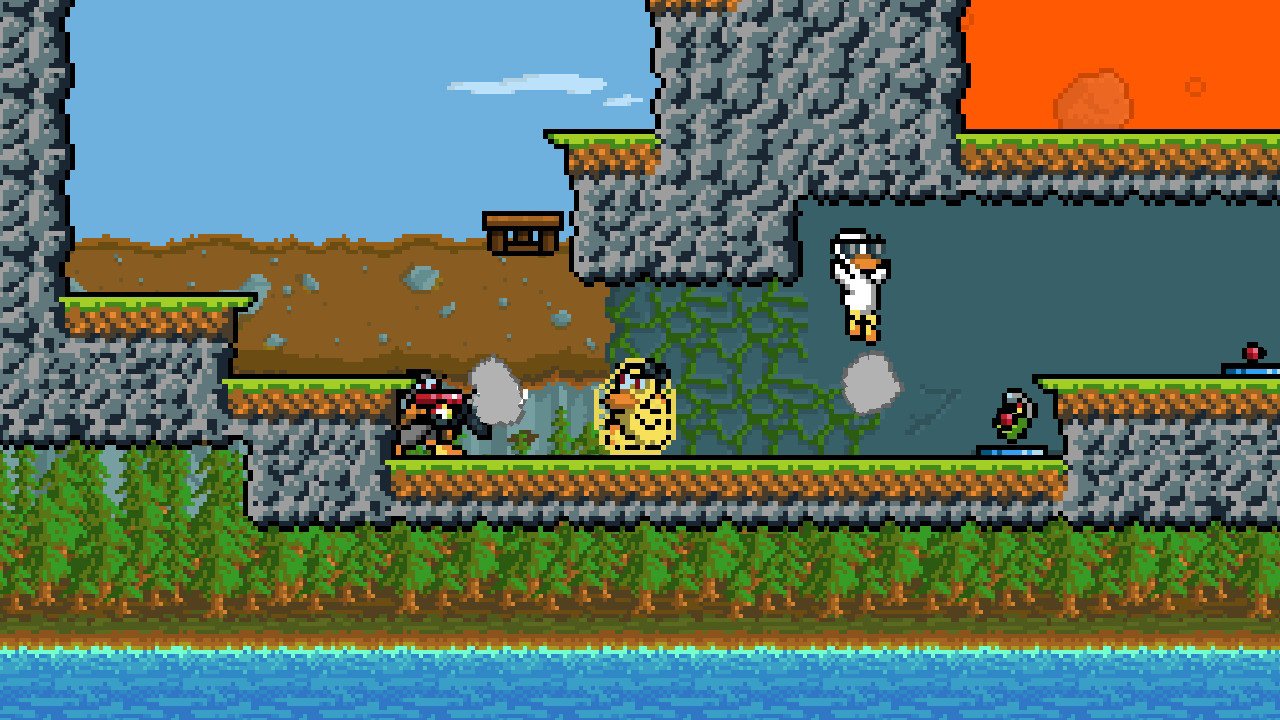 Former president of Nintendo of America Reggie Fils-Aimé famously said two years ago, “The game is fun. The game is a battle. If it’s not fun, why bother? If it’s not a battle, where’s the fun?” While he was referring to the Nintendo Switch at the time, this quote rings true for Landon Podbielski’s Duck Game as well. Duck Game is fun, and it exemplifies how entertaining multiplayer video games can be when given a weird and wacky premise with simple controls and a whole lot of love.

Duck Game is a game… about ducks. And that’s literally it. 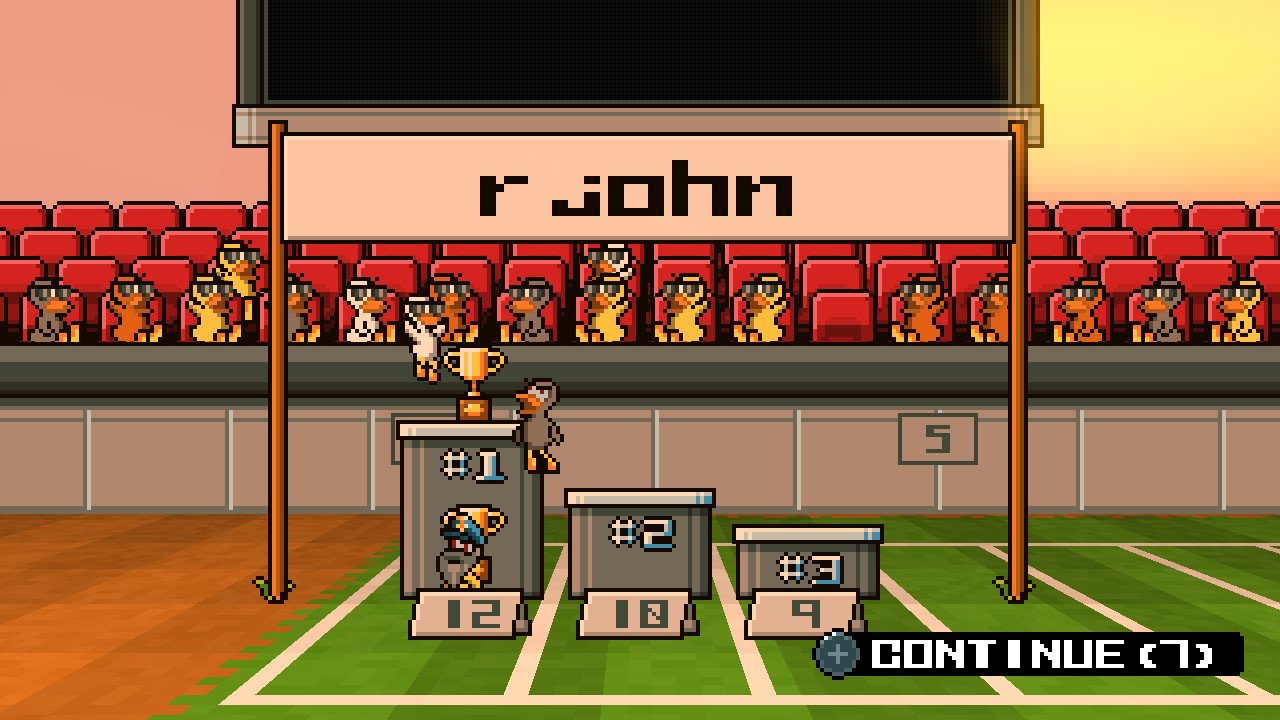 But in all seriousness, there isn’t really much to the game in terms of story. Duck Game frames the experience around a gladiator-like television show where up to four players can duke it out and remain the last duck standing. You do this by utilizing an onslaught of silly weapons as well as leveraging the differently shaped levels which all place on a single screen. Each round ends when one duck is left (or if you all die), and intermissions occur at predetermined intervals will show who’s in the lead. After at least one person reaches the amount of wins when intermission time comes (the default is 10), the game is over and you can watch a little ceremony play out; it’s a very simplistic gameplay loop.

That simplicity is Duck Game’s greatest strength, thusly lending the game high accessibility. Because of how simple it is to control, literally anyone can get into the fray and start shooting. You have standard movement and jumping buttons and you can grab weapons to shoot or throw them. For additional strategy, you can also activate a ragdoll mode where you fake your own death, which is perfect for psyching your opponents out and then going in for the kill. You also have a dedicated quacking button, which exists solely for the amusement of yourself and the chagrin of others.

The Switch is well-suited for this type of control scheme, as the controls are perfect whether you’re playing with a Pro Controller or single Joy-Con. The portability of the console combined with its fluid performance (it’s a game with pixel art, so framerate drops aren’t an issue) means you can take it anywhere. And you should take it everywhere–it’s a great party game that have literally everyone cracking smiles. 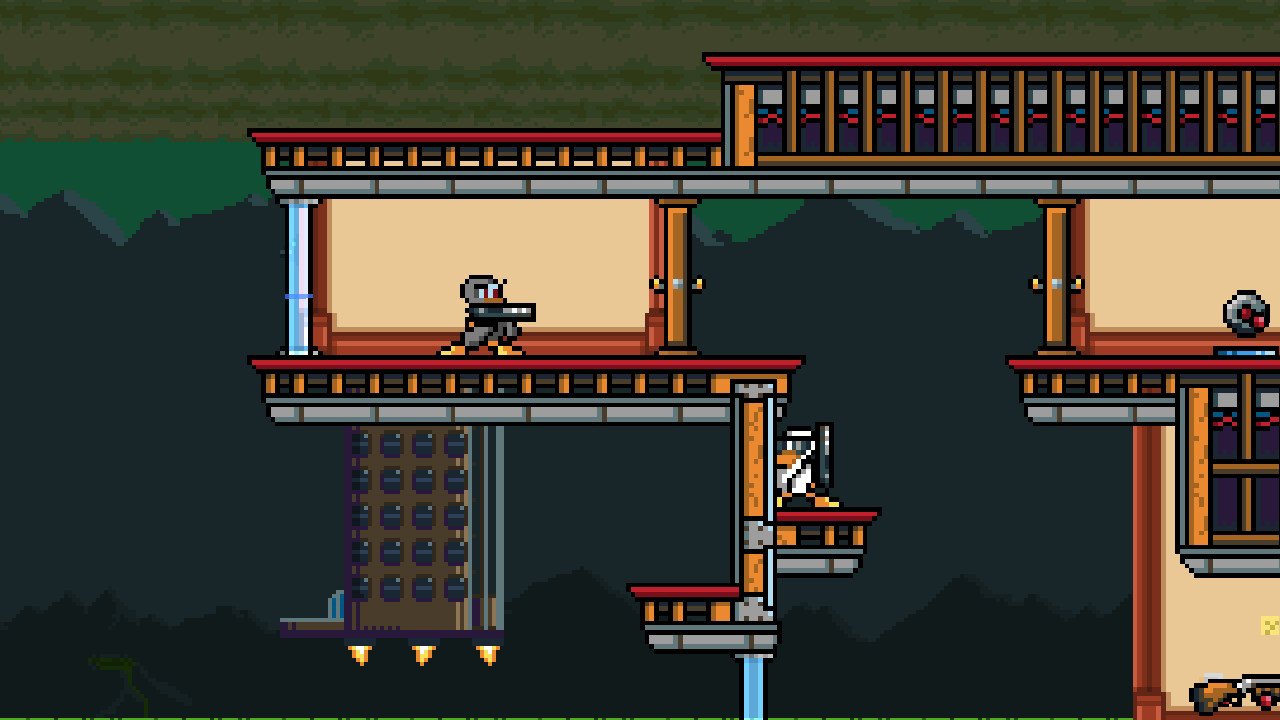 Only one of us is getting out of here alive, bub.

While it feels like there’s as much action going on as the final battle scene in a Marvel movie, the game is lighthearted enough that dying is fun rather than frustrating. Your weapons range from huge lasers that take a few seconds to charge up but can demolish your opponents to a gun with a sole bullet. That said, stronger weapons usually have a drawback, which means you might be better off with a quick but weak gun in some instances; heck, you can even kill your opponents with stones if you so choose. This is coupled with random weapon placement in each round. You could start off with a decently-sized stage with a healthy amount of firearms, or you could be stuck in a small box with the only weapons being grenades. It’s this spontaneity that’s works brilliantly in Duck Game, as rounds usually last less than a minute if your friends don’t know what’s going on. That being said, the game works perfectly when you’re in the heat of battle, and even if you don’t know what’s going on, it’s still a great time.

Duck Game is probably the perfect multiplayer game just due to how balls-to-the-wall crazy it can get. If you can get a crowd together in the same room, I challenge you not to laugh at the antics you and your friends will get into. The game understands its tongue-and-cheek tone, and while it can does feature some realistic and violent weapons, its E-10 rating means that ducks just bounce around rather than get eviscerated into bloody chunks. Mortal Kombat this isn’t, but it still has the fun, cartoony violence the former has, just without the gore. 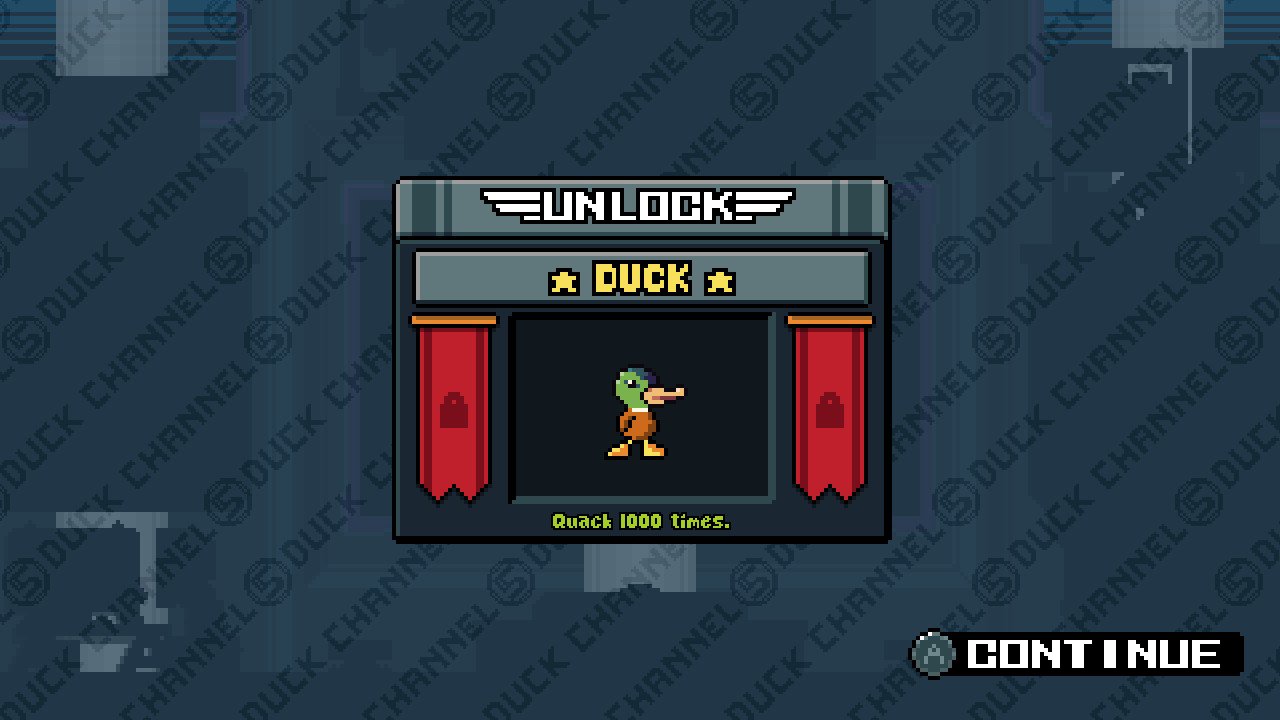 I’m so meta, even this acronym

If you can’t get people to play with locally (though the Switch’s hybrid nature means you can play this outside a living room or even a rooftop party, KAREN), there is an option to go online and fight random people or make your own room and invite friends or make it public. You can also use modifiers, set how many rounds you need to win, and even the probability of what types of stages (normal, random, or custom) you will encounter. I do appreciate the selection of multiplayer options, but I wouldn’t mind getting the option of picking my own selection of stages from the default menu. Other than that, online play is super simple to use, and even if you don’t get the same feeling of bursting with laughter on the couch in local multiplayer, it’s still an entertaining time.

While it’s billed (ha) as a multiplayer experience, there is a selection of levels that you can partake in with single-player challenges and really the only major gripe I have with this game is that you can’t face bots if you don’t have any friends with you at the moment or online. The single-player challenges are pretty diverse in terms of content, as they force you to tackle Duck Game’s harder tricks. From web-slinging to chainsaw racing, there’s a whole slate of advanced techniques you too can execute with a little practice and there are things like cosmetic hats and furniture items to unlock through tickets if you do well enough. This progression and need to unlock modifiers and hats really helps flesh out the single-player section, which would have otherwise been a glorified tutorial. 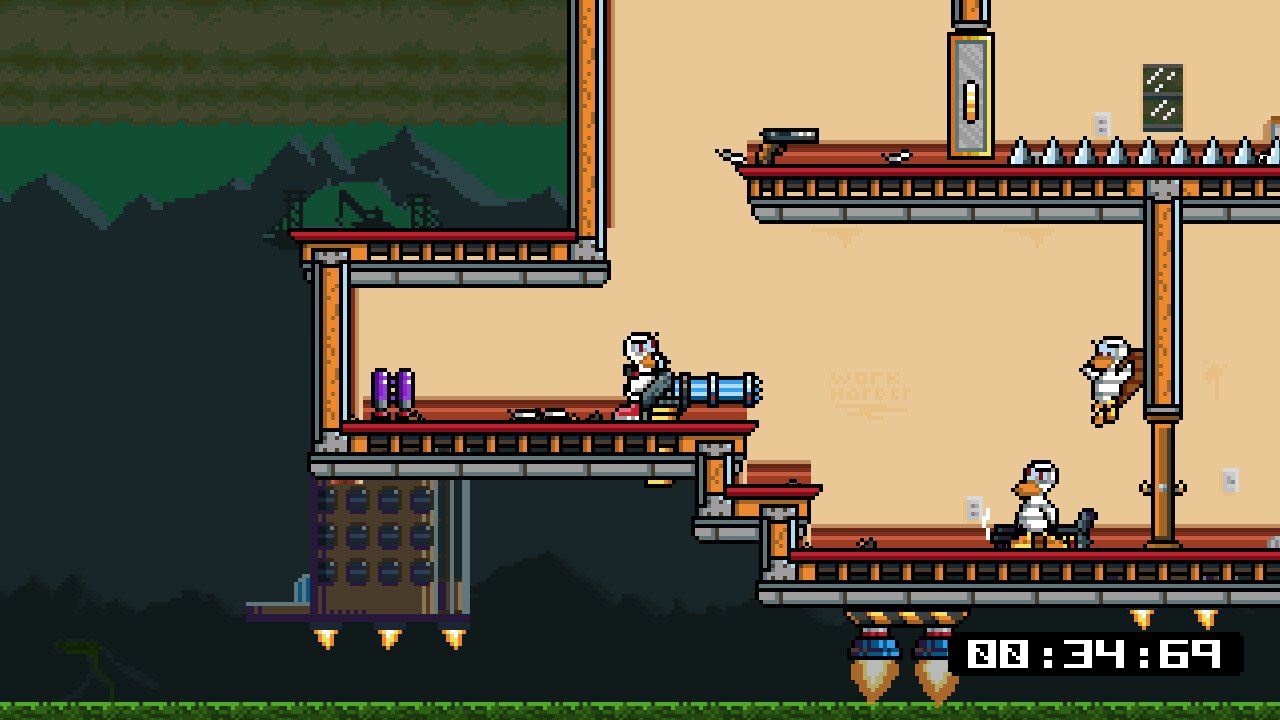 I feel like John Wick except for, y’know, the dog thing.

I do appreciate the level selection for the default normal stages, but there’s also a level editor you can utilize in order to make your own death trap of a level. The stage editor is robust and pretty easy to use, where you can choose spawn points and what items come out of item boxes, alongside making terrain and hazards. You could theoretically make the same levels as some of the default stages, but I really can’t wait to see what the community does with this editor (if Smash has taught me anything, I must prepare for memes). 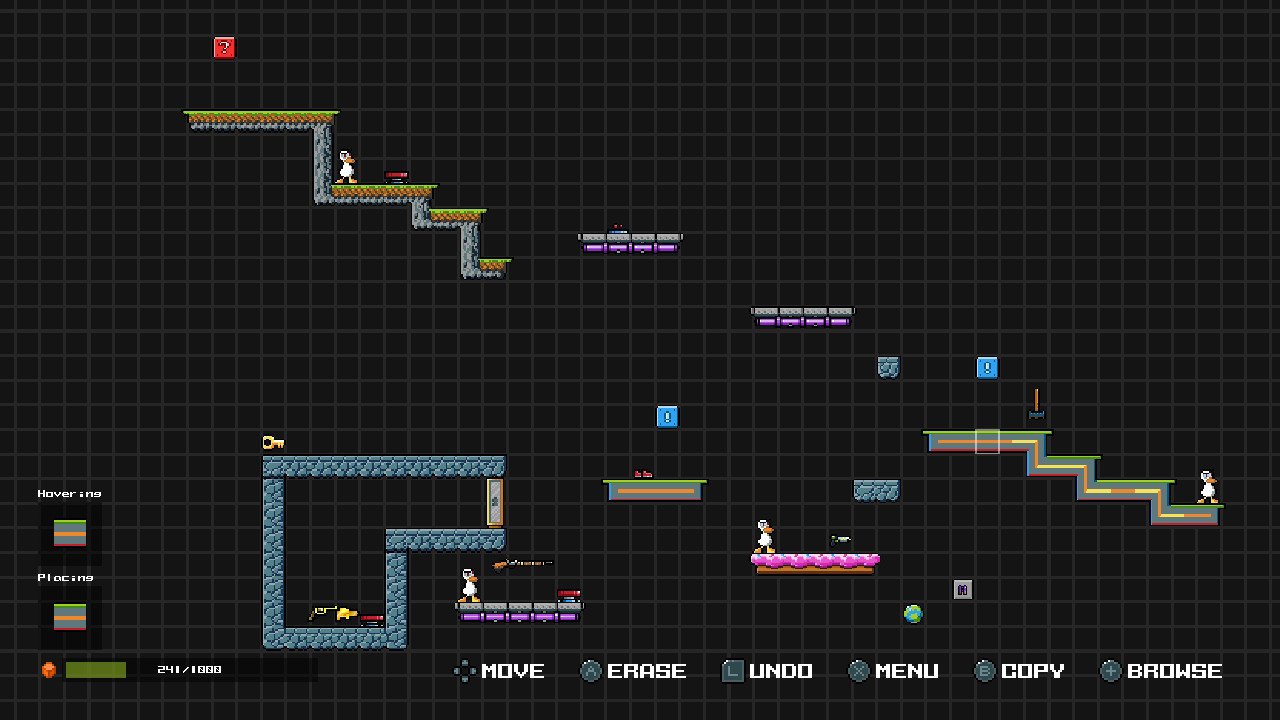 Not a masterpiece, but hey, it’s pretty neat still!

At the end of the day, Duck Game is flocking fun and a real gem for anyone wanting some pure, unadulterated entertainment. Its simple controls mixed with addictively fun gameplay and a hilarious premise make this an instant multiplayer classic.

Elisha Deogracias is an aspiring accountant by day, freelance writer by night. Before writing for Gaming Trend, he had a small gig on the now defunct Examiner. When not being a third wheel with his best friends on dates or yearning for some closure on Pushing Daisies, he's busy catching up on shonen manga and wacky rhythm games. Mains R.O.B. in Smash. Still doesn't know if he's a kid or a squid.
Related Articles: Duck Game, Indies
Share
Tweet
Share
Submit