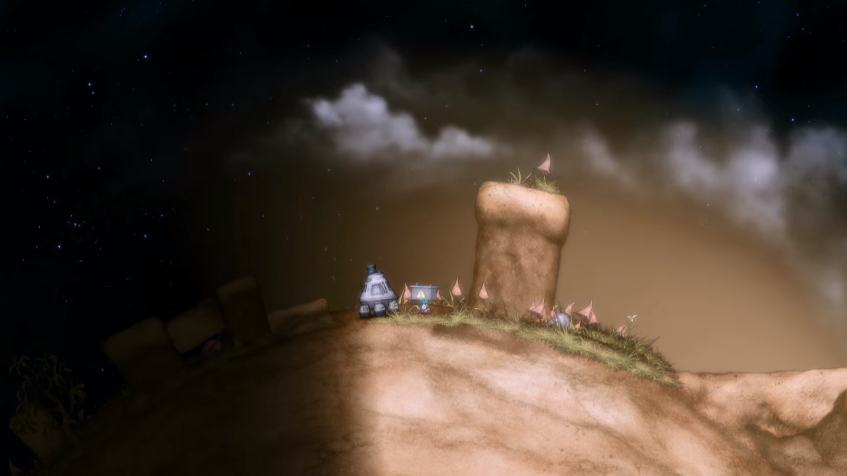 Amazing Discoveries in Outer Space, or ADIOS as it is affectionately referred to on the Internet (and will be so here), is a roguelite, platforming, space-sim, exploration game. Seems like a mouthful, I know, and that’s the reason why ADIOS never clicked for me. It tries to be too many things and fails to be anything but mediocre at all of them.

You begin as a little 2D spaceship–damaged–and on the surface of a rotating 2D planet. Your nav computer ZING gives you the rundown of how ADIOS will play. She explains–in her witty, yet slightly condescending tone–that your mission is to get home, and you must do so by travelling several light years through space.

How do you accomplish the sorcery that is faster than light travel? The answer: collect resources. Once you’ve gathered the allotted resources in a solar system, you can activate your z-jump drive and travel one light year away. You find resources by getting out of your ship and walking the surface of planets. Discovering new objects involves just touching them; some you can pick up and bring back to your ship, but the moment-to-moment action of discovery is pretty mundane.

In a game centered on exploration, visiting unique locales is key to keeping the excitement of discovery fresh. Unfortunately, that is not the case in ADIOS. Some of the planets are different colors, some have hot surfaces, wind, or severe darkness, but the general aesthetic looks like it was created in a 1997 version of Microsoft Paint with a few textures thrown on top. Your character is simple, the creatures and vegetation uninspired, and the landforms rigid and rudimentary. This is disappointing, especially because artist John Holmvall’s comic-book work is strikingly fanciful.

As you explore Microsoft Pai… ADIOS, and fly throughout the solar system, you use up energy. Energy is the lifeblood of your spaceship. Once you run out, the game is over and you must begin again. You can regain energy by bringing items back to your spaceship, as mentioned earlier, or by attaching the ship’s tow cable to an array of space junk. You fire it from the bottom of your ship at crash-landed satellites, orbiting space stations, and more, to give you that extra juice you may need to jump to the next solar system. Wielding the tow cable is finicky because the ship’s controls are unruly, with a slight touch of the steering leading to an overextended maneuver.

The unwieldy ship is part of a larger control problem in ADIOS. It feels unpolished. Let me say this now: if you do not like floaty platformers, STAY AWAY. Your character can literally jump and float off into space. Most of the planets have varying degrees of gravity, so you never know what you’re spacewalking into. The idea of precisely controlling where you will land, more or less, doesn’t exist in this game.

That being said, it isn’t just the floatiness that hinders ADIOS’s controls. The platforming is inconsistent, unrefined, and conflicts with the physics-driven galaxy. More than a few times my character became inescapably wedged in a crack because two rock platforms shifted as the planet rotated. I could remote control my ship (yes, you can do that) to save myself, but it was a frustrating waste of time.

With some of my time being stuck in crevices, it’s convenient that ADIOS has a fast-forward function. As you enter a new solar system, a top-down view of the sun, planets, and other orbiting materials is laid out for you to explore. Rocketing directly to a planet wastes energy, so what you can do instead is line up your ship’s trajectory with that of a planet’s orbit, and fast forward to land there quickly. It is a useful tool that is welcome in a game marred with repetition; if you’re going to do the same thing over and over, might as well get it done quickly.

On any trajectory you must be sure the path is clear of debris. Asteroids and space junk are all physics-driven and their orbits can change if they collide with each other, and, ultimately, with you. If your ship does crash into something at a high enough speed, it can become severely damaged or even destroyed, thus ending your game. This element added some surprise encounters that lent novelty to the experience. A couple times I met my demise because I attempted to z-jump, but smashed into a wayward asteroid. Or, a deflected asteroid crashed into a planet that I was exploring. The physics of the space debris was a fun distraction, but didn’t add enough diversity to make up for the rest of the repetitive game.

Amazing Discoveries in Outer Space is a unique amalgamation of several genres that does not come together in a cohesive way. The platforming and production value are rough, while the exploration is largely uneventful and monotonous.

On December 5, 1986, Josh was born into this world pink-faced and squalling. His only thoughts were, "WHAT IS GOING ON? WHO ARE ALL OF THESE PEOPLE? AND WHY THE HELL AM I NAKED?" 19 years later he bought an Xbox 360 and now plays and writes about video games. Life is funny that way.
Related Articles: Amazing Discoveries in Outer Space
Share
Tweet
Share
Submit