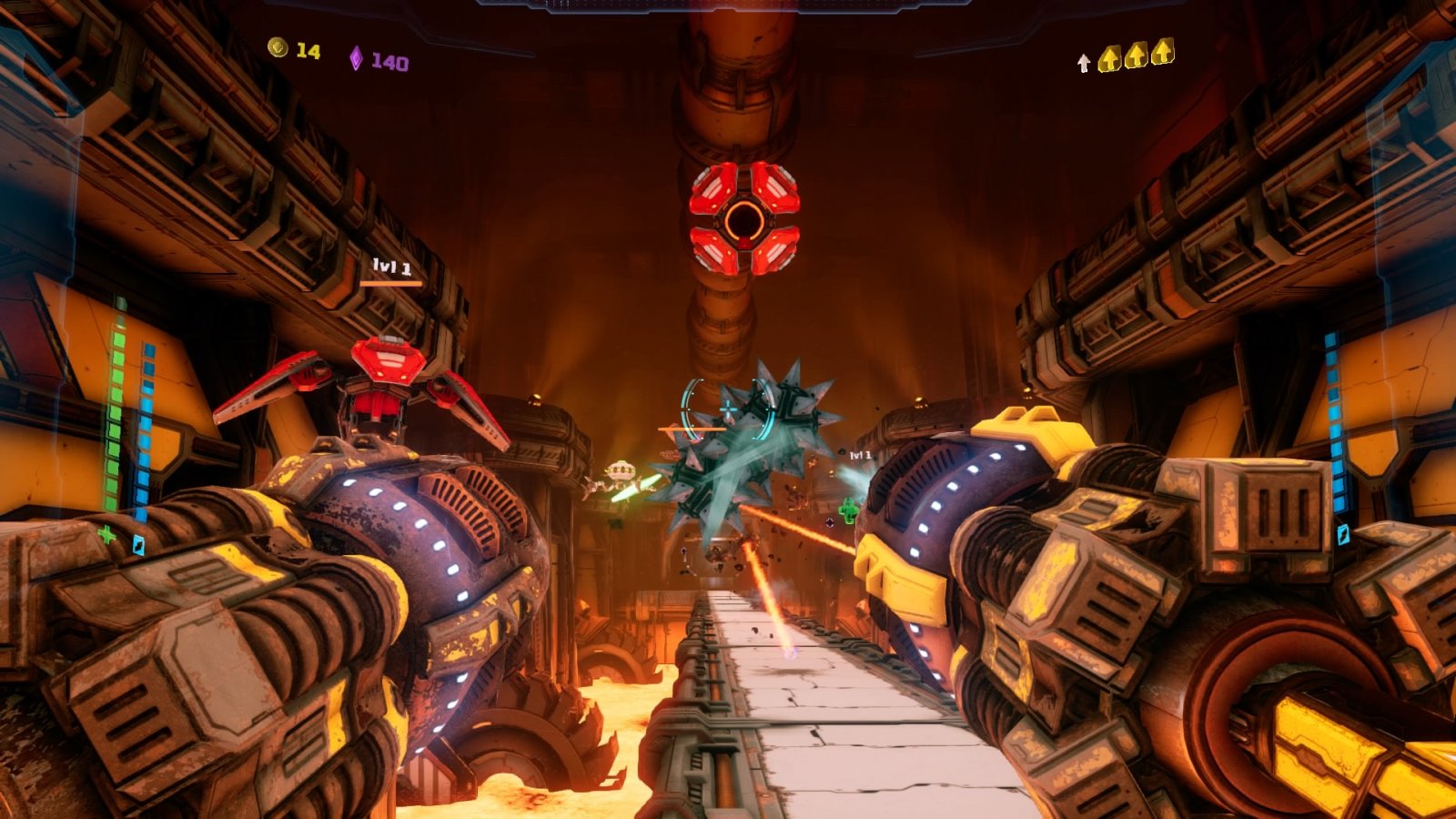 It seems like I can’t get away from the indie scene without bumping into a roguelike: the procedurally generated permadeath gameplay makes for some cool bite-sized levels admittedly. That being said, it’ll take more than some tricky level design and the thought of permanently losing your items to differentiate yourself from the indie scene, and Grip Digital’s MOTHERGUNSHIP aims to do so with its comprehensive gun crafting system, clever dialogue, and challenging difficulty.

In MOTHERGUNSHIP, you’re a soldier on a mission to destroy the titular MOTHERGUNSHIP head-on. In order to do this, you’ll need to defeat surrounding ships that will grant you access to the main one. While a simple story drives the game along at a decent pace, I do have to commend the cast for its performances. It’s good-hearted fun with some pretty hilarious quips, whether it’s the dense but amusing Colonel or only sane person Wilkinson. You have three main cast members with some supporting characters delivering quips here and there, but the flavor banter between missions is very likeable and made me laugh quite a few times. One specific conversation that made me chuckle was when the crew decides that in order to infiltrate the MOTHERGUNSHIP, they would have me waltz in there as a pizza delivery guy and head to the center. It works, to everyone’s amusement.

The main mechanic in this game is the robust gun customization feature. Parts are the name of the game in MOTHERGUNSHIP, and you’ll be able to obtain and lose them during missions. They can range from connectors (which will be useful for adding more components to your gun), barrels (the main projectile), and boosters (which will add a host of effects to your gun). After you get a hang of the customization feature, it becomes comprehensive and detailed with your left or right gun, as you can fit so many parts in it. Adding more parts to your gun will cause it to consume more energy, which means you’ll have to balance energy consumption and power. Depending on your strategy and playstyle, you might want to go through a ship with a peashooter and grenade launcher or just get balls-to-the-wall crazy and have five shotgun barrels together. You can get as creative as possible in the gun crafting range, which allows you to use all of your obtained parts and create a monstrosity of a firearm.

MOTHERGUNSHIP is an FPS first and foremost, and your guns contain unlimited ammo, with the exception that every weapon needs to recharge after a set amount of time. Yes, that also includes your fists, which you can utilize in case you don’t have a weapon on hand. Before every mission, you’ll be able to select your loadout (in most missions) and see how many boss class enemies you’ll face. You’ll have to traverse procedurally generated rooms full of robotic baddies in order to defeat the spaceship you’re on; survive and get the spoils from the ship. Die, however, and you’ll be sent back to the main hub world, and the parts you’ve brought will be destroyed. Missions are divided into story missions and side quests, which contain easier rooms where you can obtain parts should you lose a lot of your inventory in a particular unlucky mission. Some side quests will force you to start with a few pre-selected parts, though there’s no penalty for dying in these missions, so these are great for beginners or those who want to farm some more parts.  In addition, some missions will include gambler rooms (which will include some random conditions that may be good or bad), and challenge rooms (where you have to complete a goal like destroying enough enemies in a certain amount of time for some good loot).

While there are cover elements within gameplay, the game feels more like an arena shooter, as enemies will relentlessly shoot at you in all directions. It’s up to you to keep moving and jumping (with your starting three jumps getting upgraded to the double digits with pickups during missions). If the enemies whittle your health down to zero, then it’s curtains for you, but thankfully there are some permanent powerups you can receive in the in-game armory that will assist you. Action is visceral and very fun, with shots having a satisfying clank when they hit. While you can get overwhelmed easily, there are some great moments when you can clear a room full of enemies with your guns.

The main gameplay loop is enjoyable and entertaining, but it’s when the roguelike elements conflict with the hardcore nature of the shooting elements that the game falls flat. The permadeath aspect forced me to be cautious with my loadout selection (as a simple mistake would cause my equipment to get lost forever), but it also means that the gun crafting element is restricted as well. As you can only bring a handful of parts with you in any given mission, you won’t be able to create some of the more bombastic selections you might have in the gun crafting range. This does make the mission guns justifiably underpowered, but considering the enemies can get brutal due to the procedurally generated stages, this can be tragic in later missions.

There’s also this cycle of hurting when you do end up losing, as parts will come flying out of your inventory with each death. It’s hard to get back up once this happens and makes replaying easier missions feel more like filler than genuine length. Due to the procedurally generated rooms in missions, you also will start to see repetitive designs after a few story missions. Story stages have similar stage layouts but end up being random in placement of enemies, so the main campaign missions are not truly unique. Finally, the game looks great for an indie FPS, but there are times when the framerate drops to a crawl (specifically when you have a very powerful gun and enemies are swarming around your screen). It’s not a dealbreaker, but it will get quite noticeable as you advance through the main campaign. There also is a lack of online co-op multiplayer, but the developer has confirmed that it will be in a later patch in August.

MOTHERGUNSHIP is a great FPS with some laugh out loud dialogue and a deeply entertaining gun crafting mechanic. While the roguelike elements bring the game down, it’s still a delightful little game to fire up during the AAA summer drought.

Elisha Deogracias is an aspiring accountant by day, freelance writer by night. Before writing for Gaming Trend, he had a small gig on the now defunct Examiner. When not being a third wheel with his best friends on dates or yearning for some closure on Pushing Daisies, he's busy catching up on shonen manga and wacky rhythm games. Mains R.O.B. in Smash. Still doesn't know if he's a kid or a squid.
Related Articles: Indies, MOTHERGUNSHIP
Share
Tweet
Share
Submit