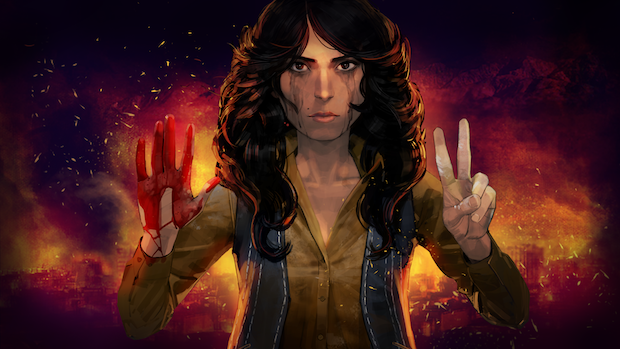 Passion projects can produce some of the most inspiring work, but also some of the most disappointing. Creators of such personal pieces can expose certain stories that others have very little knowledge of, but they can also become so invested in one aspect that the rest of the project suffers. 1979 Revolution: Black Friday is the definition of a passion project for Navid Khonsari, so much so that he has risked being banned from re-entering his homeland just to get this message across to the public eye. 1979 is about the Iranian revolution that occurred throughout the late 70’s in attempts to overthrow the Shah and install a reliable government. Unfortunately, many westerners know very little about this subject, something that will undeniably change by the time you see 1979’s credits roll.

Heading this emotional journey is the main character Reza Shirazi, a man that bleeds pride for his country, but also has an unwavering commitment to his family. He seems to have little combat experience, but instead relies on being a photojournalist to uncover the truth around him. As you walk around the streets of Iran, you get notifications of different photo opportunities. An early showing of this comes during a protest that sees Reza on top of a building while people below show their disdain for the oppressive regime.

A separate opportunity comes when a large group begins to pray. You snap this moment and get more information about the situation at hand. The piece of text in question talks about how people used prayer as a form of nonviolent protest against the Shah. You also get an actual image of the shot alongside your in-engine photo. These opportunities are not the only instances where you can learn more about the topic at hand. Heading into the menus will reveal a host of topics that feature a few paragraphs of description. Despite the overload of information available, it isn’t pushed on the player, making the game never feel overly preachy.

One thing that does lead you into wanting to know more about the subject material is the great characterization of 1979’s lead. Reza is the first person you meet, but you are soon introduced to another group of revolutionaries, some of whom are family, while some are friends. This group will act as your closest allies, but the best character-driven moment in the game comes when Reza and his brother head home for dinner. Reza and his sibling’s relationship features more than few layers of resentment, respect, and admiration, all of which are shown off during this fifteen minute section.

Possibly the most interesting moment of the game occurs when you are looking for something in your father’s office, but instead stumble upon old videotapes. These tapes are around 3-5 minutes in length, and are all actual VHS home videos. They show off some really emotional sequences throughout the protagonist’s life, such as his first day of school, seeing his uncle leave for the States, etc. It’s a small bit of the game, and something that players can completely miss, but it shows how much love and care was put into 1979’s plot. Each character is crafted expertly, and none more so than Reza.

At the same time, some of the mechanical aspects of 1979 are far from expertly crafted. The game takes a lot of cues from Tell-Tale’s recent adventure game series’. A small portion of your time will be spent wandering around, talking to different people in the environment, and interacting with quick time events that force you to hop in a certain direction. These parts of the game feel tacked on, and largely exist only to hold you over until the next character moment. As is the case in the adventure/narrative-driven genre, most of your time in the game is spent in dialogue trees. Some of these verbal interactions between characters can fall into the awkward category, with actors/actresses stumbling over a word or over-emphasizing their speech. It feels as if some of the performers were forcing the use of English as opposed to their native tongue. This brought about thoughts of how much more enjoyable the title would have been if it featured no English, and instead relied on subtitles. The vocal missteps ultimately do little to harm the well-crafted characters throughout 1979, but they are slightly off-putting.

While much of the western part of this world knows very little about Iran, one thing people can picture almost immediately is an outline of what the cities look like. Drab, brown, dilapidated roads, and an overall dower tone to the architecture, all of which comes through in 1979 Revolution: Black Friday. The creation of cities within the game is really well done, and helps accentuate the more noticeable parts of cities such as their city squares, marketplaces, and other notable pieces of infrastructure. The artists also have an intelligent detailing system with the characters, with the more important ones featuring scars and tattoos, while the less important ones blend into the background with simplistic facial designs and inartistic clothing.

Making a title as deep as 1979 is a challenging task, and one that should be met with great caution. It’s pretty clear that Khonsari and his team have fallen in love with their project, and while some mishaps appear, their vision seems to have been achieved. It’s a great way to learn about something few of us know about, while also introducing a culture of people that experienced blood, tears, and death just to achieve their lofty goals. 1979 Revolution: Black Friday has some really frustrating issues, but it tells an important story that everyone needs to experience.

1979 Revolution: Black Friday tells the story of the Iranian Revolution in the year within the title. It's a beautiful, heart-wrenching story that makes you quickly fall for every character on screen. The lack of polish and occasional technical frustrations hamper its impact at times, but the message is still loud and clear. This isn't about crafting some experience you're going to sink one hundred hours into; it's about expanding your horizons and learning about some truly important people.