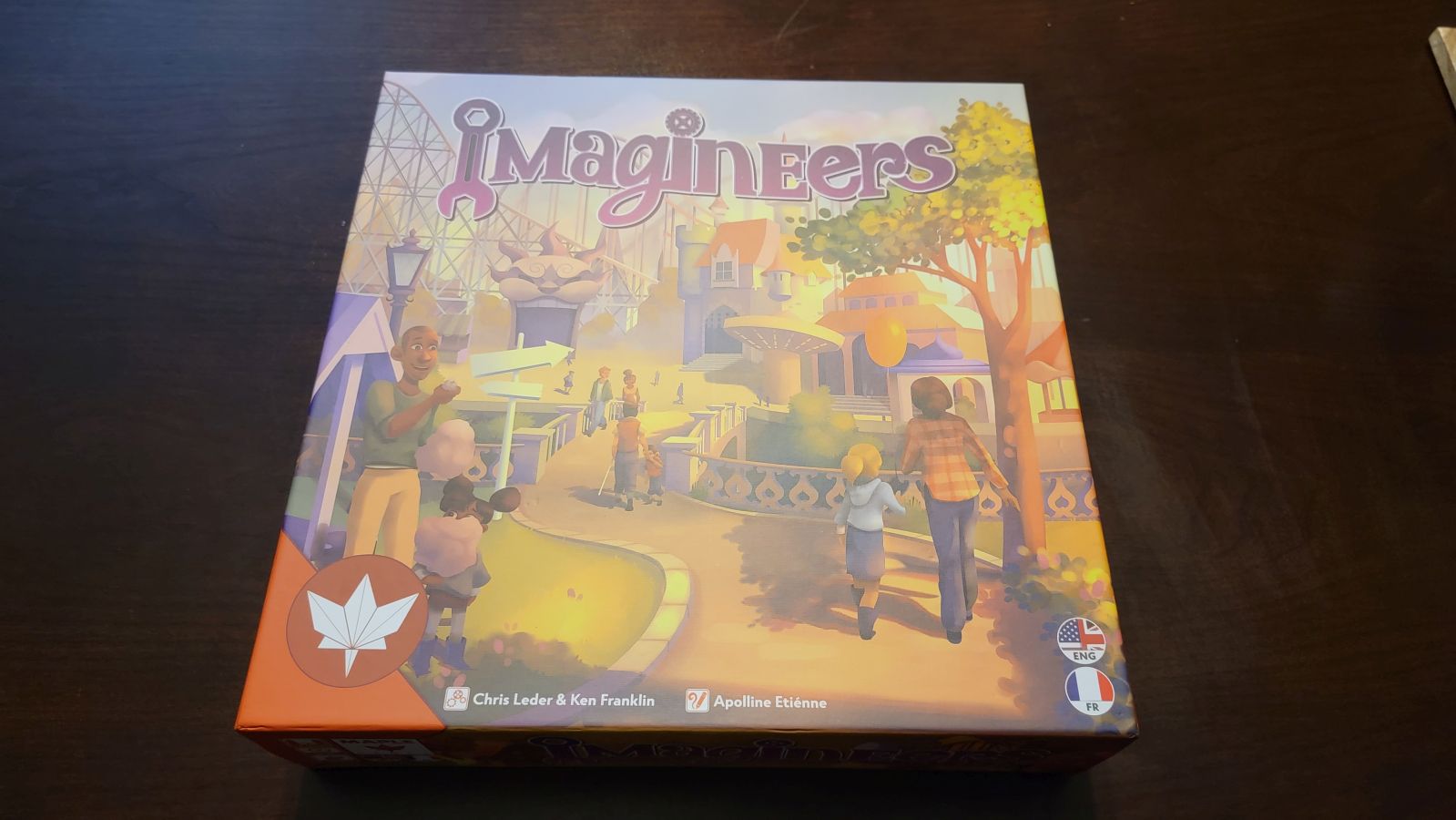 Managing a theme park isn’t easy – it costs money to build new attractions, you have to keep people happy, you have to keep money coming in to sustain your operations, and you have to deal with competition. That’s the underlying basis for Imagineers, a game for 1 to 4 players. Though relatively fast-paced, Imagineers promising premise is somewhat disappointingly implemented. That’s not to say there isn’t enjoyment to be found for casual gamers, but those seeking a challenge may need to search elsewhere.

The basic premise is simple: you are an “imagineer” at a theme park and your job is to create new rides, lead the right customers to those rides, upgrade your roller coaster, earn money, and gain fame – all while attempting to thwart your rivals.

The initial setup is easy, and most parties will be playing within minutes. First, you lay out the large game board which is dual-sided, featuring both a day and a night map with night having a bit more complex of a layout, although both sides will ultimately provide the same experience. Next, you’ll lay path tiles on the board – how many are laid out is determined by the number of players participating and serve to cover up some of the ride spaces, providing a cleaner playing field. Players then will choose one of four Roller Coaster Boards, along with its matching Roller Coaster Entrance Tile, 10 double-sided Ownership trackers, and Fame tracker. Additionally, each player will pick up a Money tracker and a Happiness tracker. 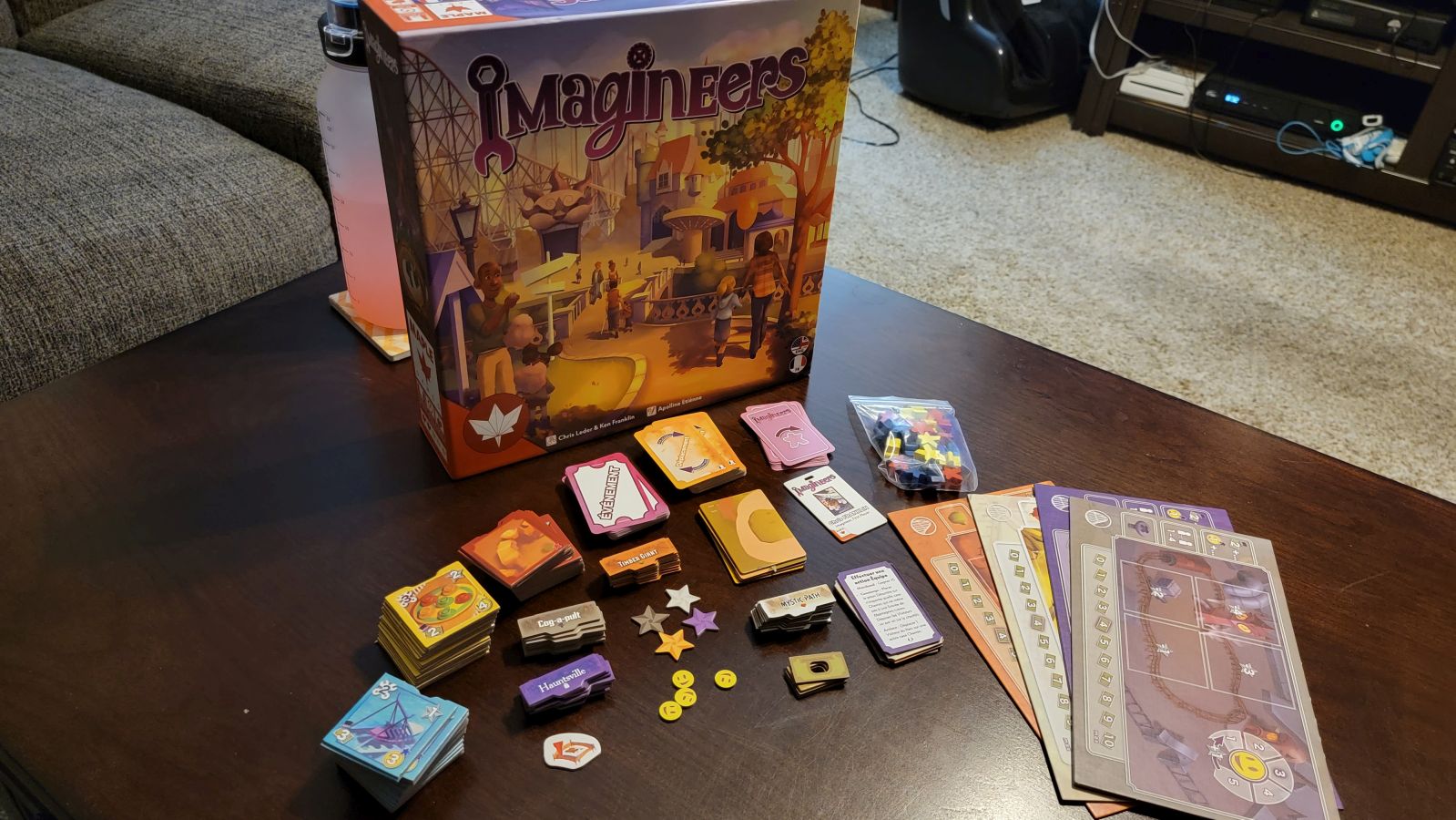 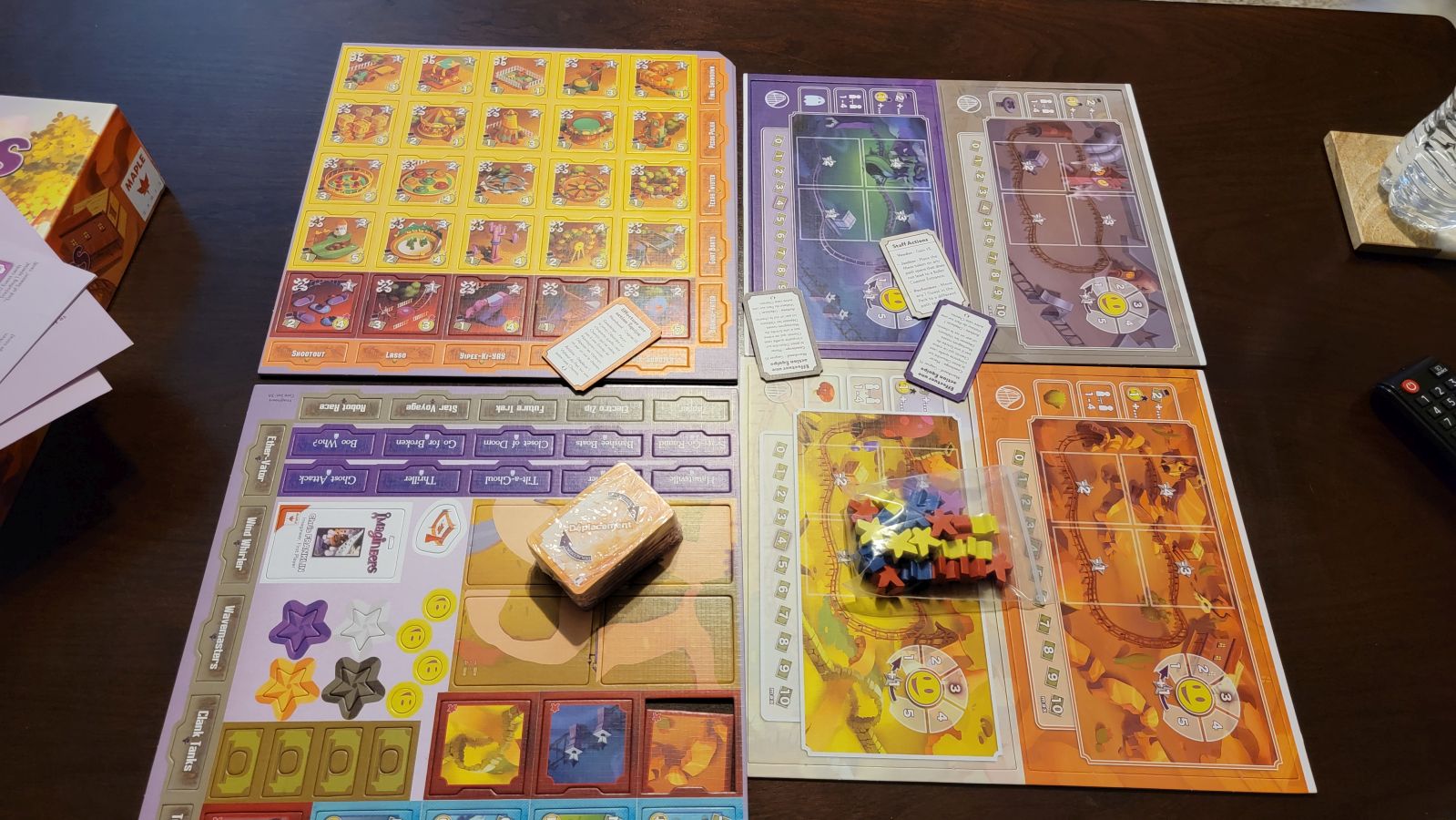 Players will then place their Roller Coaster Entrance Tile on any open attraction space on the board and name it using one of their Ownership trackers. Ownership trackers feature ride names on both sides, allowing you to choose from one of 20 different names for each ride, and are color-coordinated, to help players easily distinguish which ride is owned by which player. Two separate decks are then placed in the middle of the game board; the movement deck and the event deck. The number of cards placed varies by player count. 24 different colored meeples are then mixed up and placed in pairs of two at each ride waiting line. Finally, two decks of 24 Park tiles are made – with one deck attraction side up and the other deck roller coaster side up. Each player begins with one tile from each pile. After the initial set-up is complete, play will begin.

At the start of each round, a movement and event card will be flipped over. The movement card determines how visitors to the park (meeples) can be moved and will provide instructions such as “Move group of 3” or “Move group with at least one red guest,” while the event card will change up how you earn money, happiness, or fame by providing instructions such as, “Each turn, one red attraction scores triple happiness,” or “Immediately, players may spend 3 money to gain 1 Happiness or vice versa.” Play will then begin with the player with the least amount of fame going first, followed by the other players in a clockwise motion.

On their turn a player must complete three steps: play one park tile, move guests, and take one new park tile. When playing a park tile, a player can take one of three actions: build an attraction, upgrade their rollercoaster, or perform a staff action. Building an attraction costs money, which is tracked via your Money tracker on your Roller Coaster Board and is earned by customers landing on your rides. A player can place their new attraction on any open attraction spot on the game board and then they will use their Ownership tracker to name the ride. Each attraction is color coded and only a customer of the same color that lands on the ride will earn a player money, so some strategy may come into play as to the placement of rides in relation to the current customer layout.

In lieu of creating a new attraction, players may also choose to use their tile to upgrade their coaster, and place it on one of four empty spots on their Roller Coaster Board. Upgrading a coaster costs money, but ultimately provides more reward when a red meeple lands on it. Lastly, a player can give up a park tile to perform one of three staff actions: gain $5, place a mess token on any attraction to prevent it from being used for that round, or move guests. 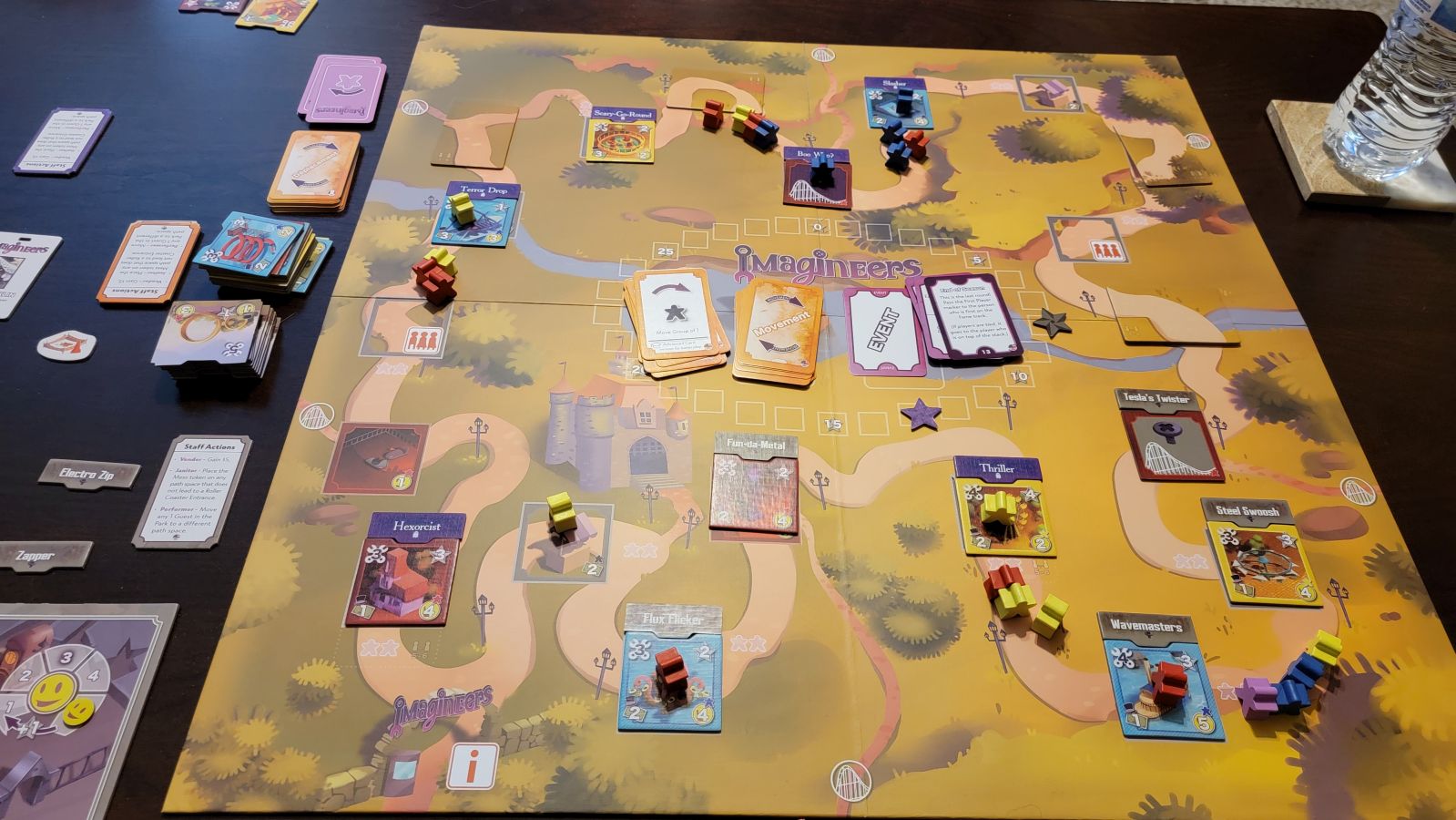 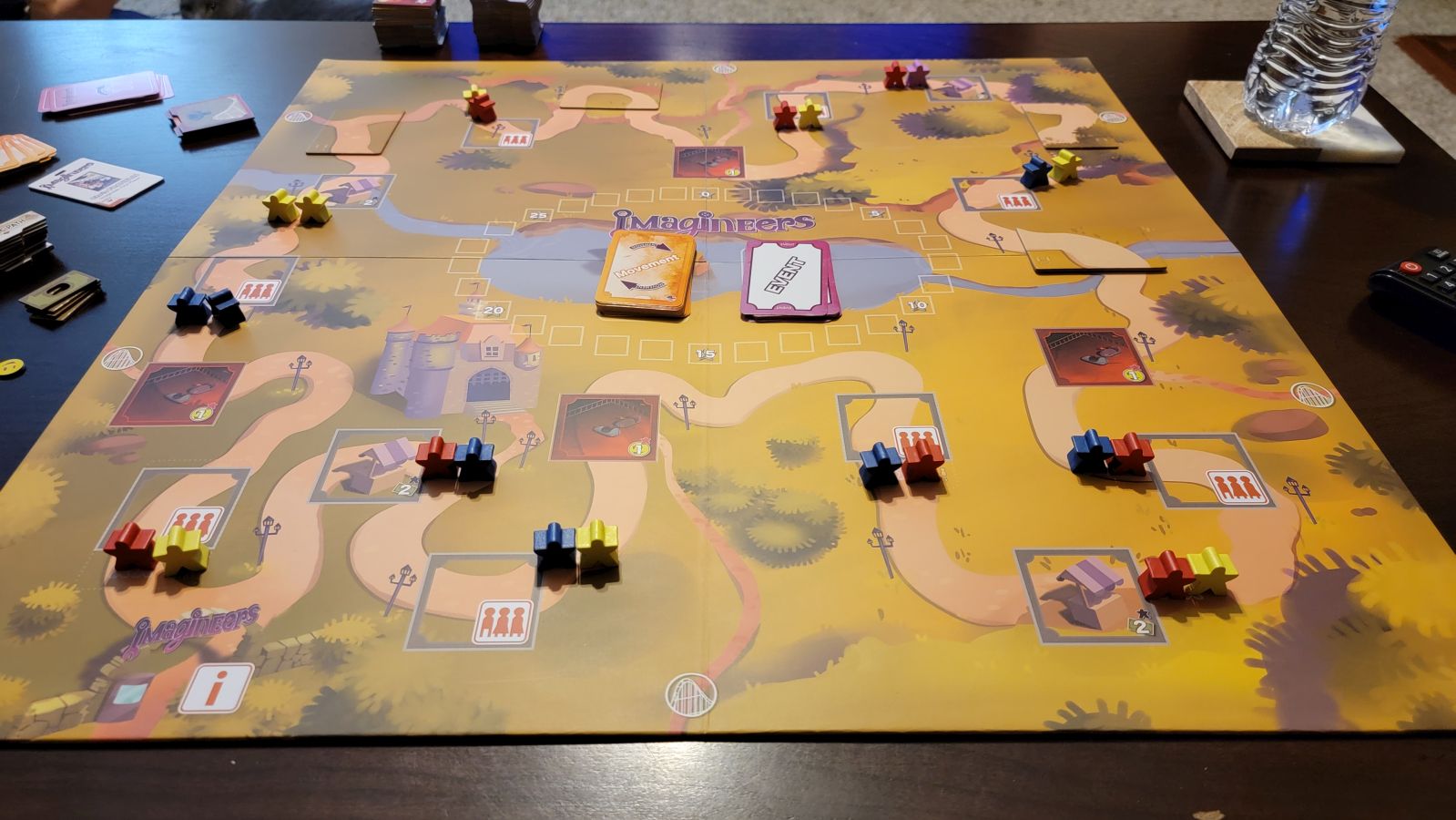 After a player chooses their action then they must then move all meeples on the board, following the rules laid out on the current movement card, to the next available space on either a ride or in a waiting line. Only one meeple can be placed on a ride at a time, while four can be in the waiting line. Money and happiness are then awarded to any player which has a meeple on their ride that matches the color of that ride. The amount of money and happiness obtained differs by ride and is stated on the ride tile. No more than $10 can be held by a player at any given time, while every five happiness gained earns one point of fame. After the meeples have been moved and the player has picked up a new park tile, then the next player will begin their turn. After all players have taken a turn then that round is over and new movement and event cards are drawn. Play continues until the “End of Season” event card is drawn, which signifies the last round.

A typical game can last between 30 minutes to an hour, depending on the number of players involved, and remains fast-paced enough to hold your attention during each round, but unfortunately just isn’t as fun as the concept had led me to expect. While there are multiple choices to make per round, little strategy is involved as the game does not last long enough for strategizing to come into play. Likewise, since you can only hold $10 at a time, many options are either unavailable each turn or just unnecessary, such as a player not having enough money to build a new attraction or upgrade their coaster, or just receiving no money despite multiple meeples landing on their rides. Happiness thankfully does not have this issue, but happiness tends to be awarded in lower numbers than money, and fame is slowly gained.

In my playthroughs, most fame was gained when tallying end points as each ride placed awards players a certain amount of fame upon game completion. Unfortunately, any roller coaster upgrade space not filled on the Roller Coaster Board subtracts fame, meaning players are forced to use the few turns that they have to make upgrades to their roller coaster, even though that ride only takes up one space on the board and due to the movement cards and their often-limiting restrictions, may spend most the game never having a rider. Between the coaster upgrades and low money limit, the game actively works against the player having fun. If the game had been more open and lasted longer, then far more strategy could have been employed, leading to what I expect would be far more enjoyable playthroughs.

The game board and tiles look nice, featuring a whimsical Disney-type style, and the batch of names to choose for your rides can be rather funny, making it quite fun to match the right ride to the right name. Unfortunately, the name of the rides has little bearing on the game itself and serves merely as an amusing distraction. 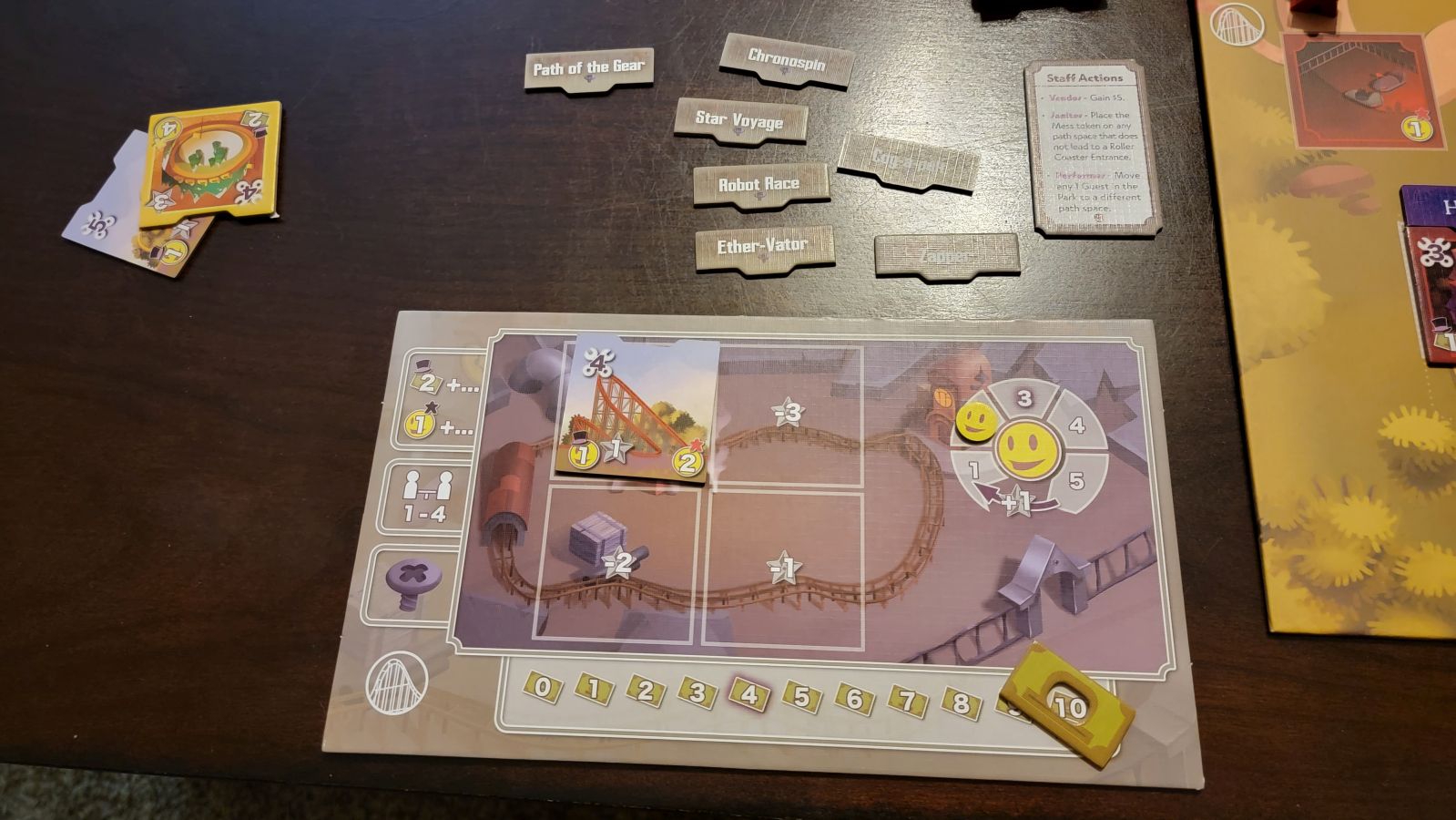 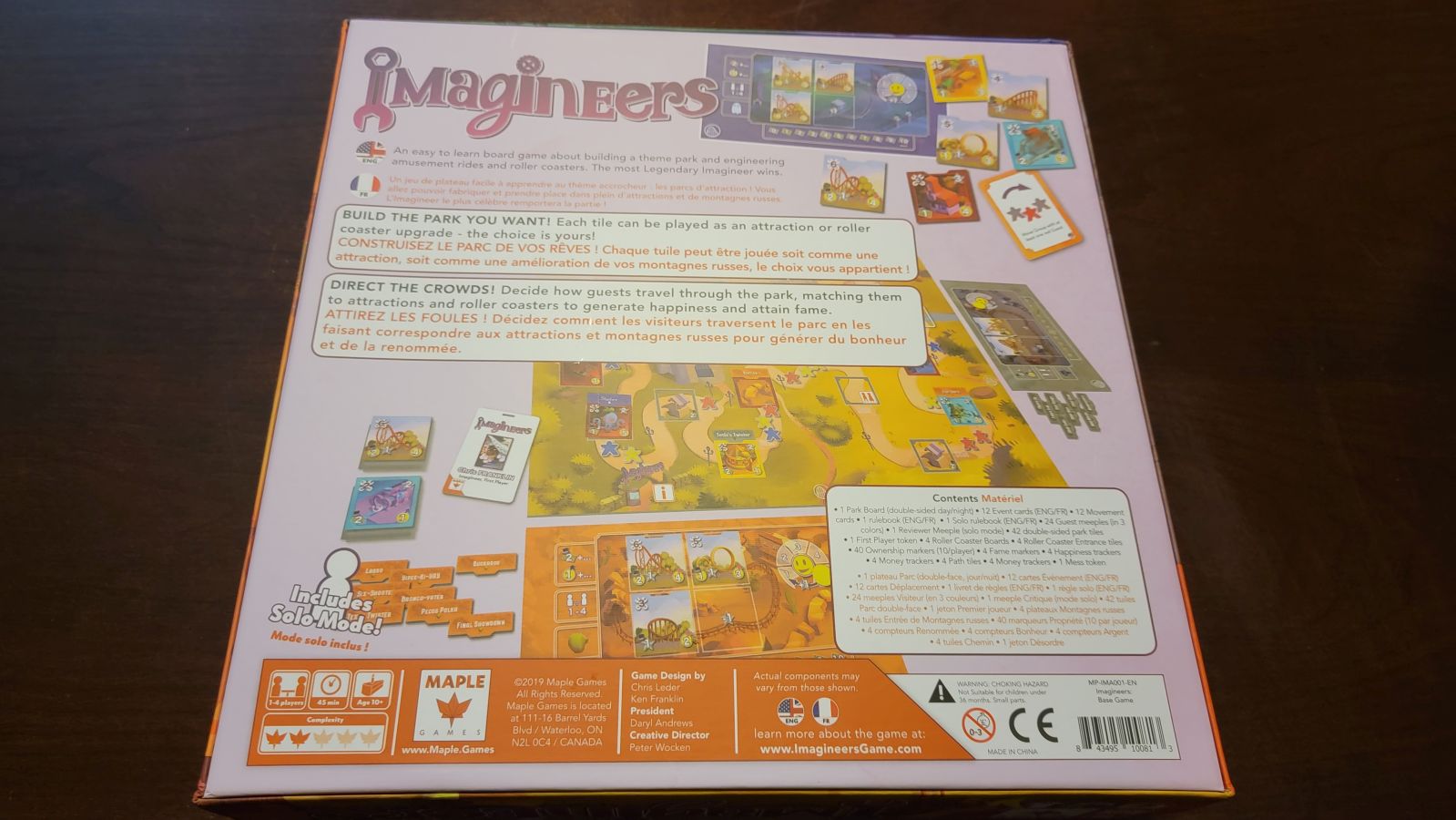 While I appreciate what the event and movement cards were created for, I feel as if they created unnecessary deterrents to enjoying the game rather than adding to the game. I am fairly confident that the game would have worked better with none of the restrictions added from the cards, instead allowing players to focus on creating rides, moving customers, and attempting to sabotage their opponents from gaining any points. The cards, especially the movement cards, tend to make it extremely hard to move your meeples as they far too often restrict you from moving entire groups of patrons featuring specific colors, meaning you often end up with piles of meeples in one area of the game board and no points being scored due to their lack of movement. This persisted throughout our playthroughs, although it could have just been bad luck with the shuffling of cards since we got card after card restricting movement and that may not always be the case for players.

I have no issues with how happiness and fame are tracked but do have an issue with money as the cap of $10 only deters players from being able to experiment with choices and often leads to players gaining no money on turns despite multiple of their rides being occupied. This is disheartening and steals most of the sense of accomplishments players may otherwise have garnered from having well-placed rides and planning on how the crowds may move. If the developers had removed the money tracker token and instead included fake cash, that may have prevented this issue, as more money could be held per turn and allow for more strategizing and a sense of accomplishment. As it stands, money becomes almost an afterthought.

As it stands, Imagineers is a fun, yet flawed game that may work well for a general audience or a family but will not provide enough of a thrill for those seeking a more nuanced experience.

Essentially, Imagineers is a great-looking game with a creative premise but just isn’t implemented in a way that entices me to continue to play after the initial few rounds. The restrictions created by the movement and event cards, along with the low amount of money allowed to be held at any given moment, prevents players from being able to plan any long-term strategies and often limits the choices available to the player on each turn, removing the fun that would have stemmed from being presented with multiple options to experiment with per turn. May be fun for a non-competitive game night but it won’t be enough for those seeking a challenge.

Richard Allen is a freelance writer and contributing editor for various publications. When not writing for Gaming Trend you can find him covering theatre for Broadway World, movies and TV for Fandomize, or working on original stories. An avid retro gamer, he is overly obsessed with Dragon's Lair. Chat with him via @thricetheartist on Twitter and @richardallenwrites on Facebook and Instagram.
Related Articles: Imagineers
Share
Tweet
Share
Submit