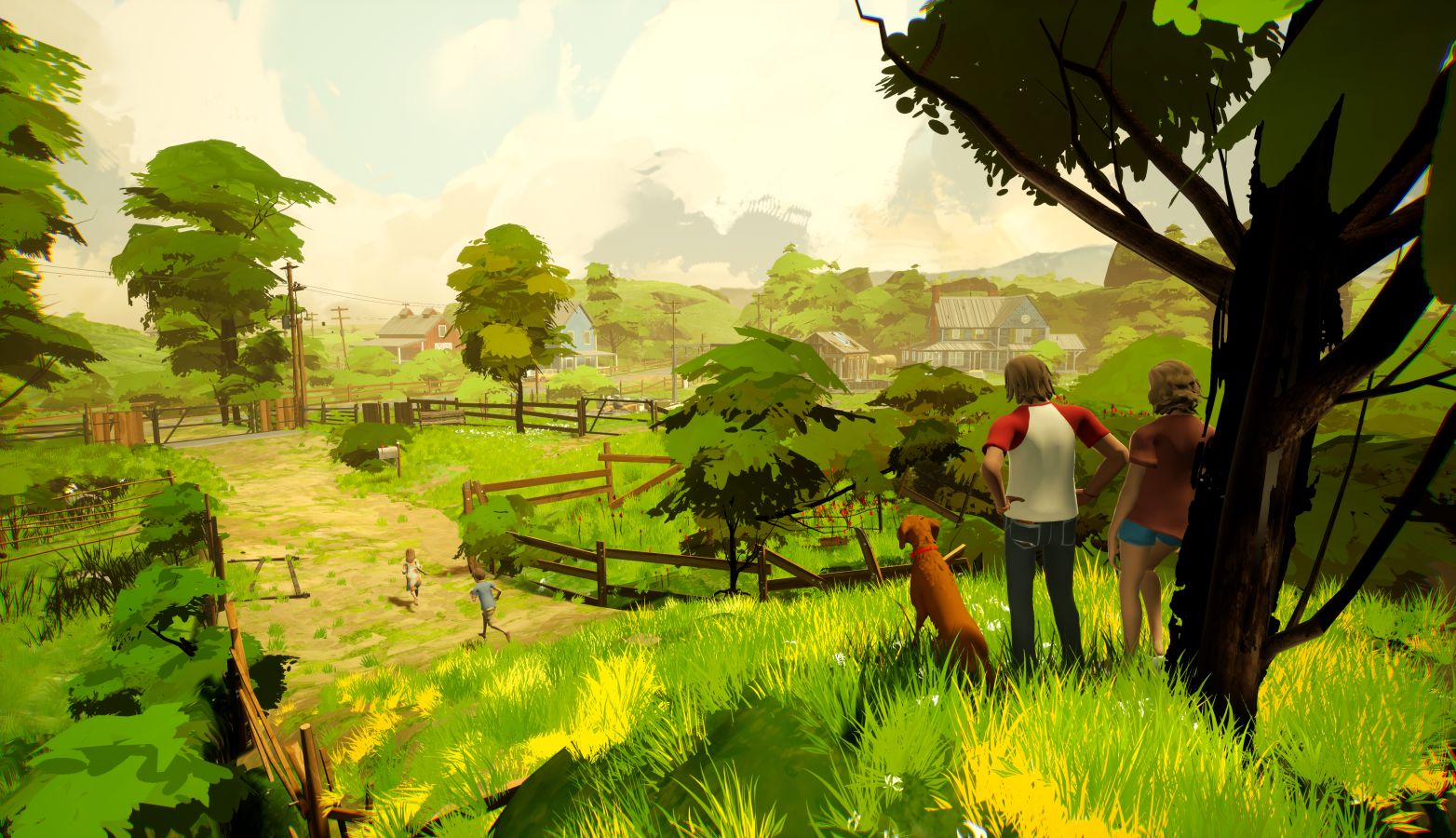 Full disclosure: I am not usually one that rushes to pick up the newest narrative-driven games. First person shooters and third-person adventures with compelling stories and great moment-to-moment gameplay are where I am most comfortable. When I picked up Where the Heart Leads, I was not expecting to have nearly as much fun with it as I ended up having as the gameplay mostly centers around walking around and having conversations. Let’s set the stage.

Where the Heart Leads sees the player in the role of Whit, a small-town family man with a wife and two children and even a lovable family dog. Quickly, Whit finds himself at the bottom of a seemingly impossible sinkhole that formed outside his house. Your goal is to make your way back up to your family, but not everything is as it seems. As you travel up you begin to relive the most important moments of Whit’s life, as well as those that have not seemed to happen yet. This leads into the meat of the game, as you make choices that shape not only Whit’s life but the lives of everyone around him. 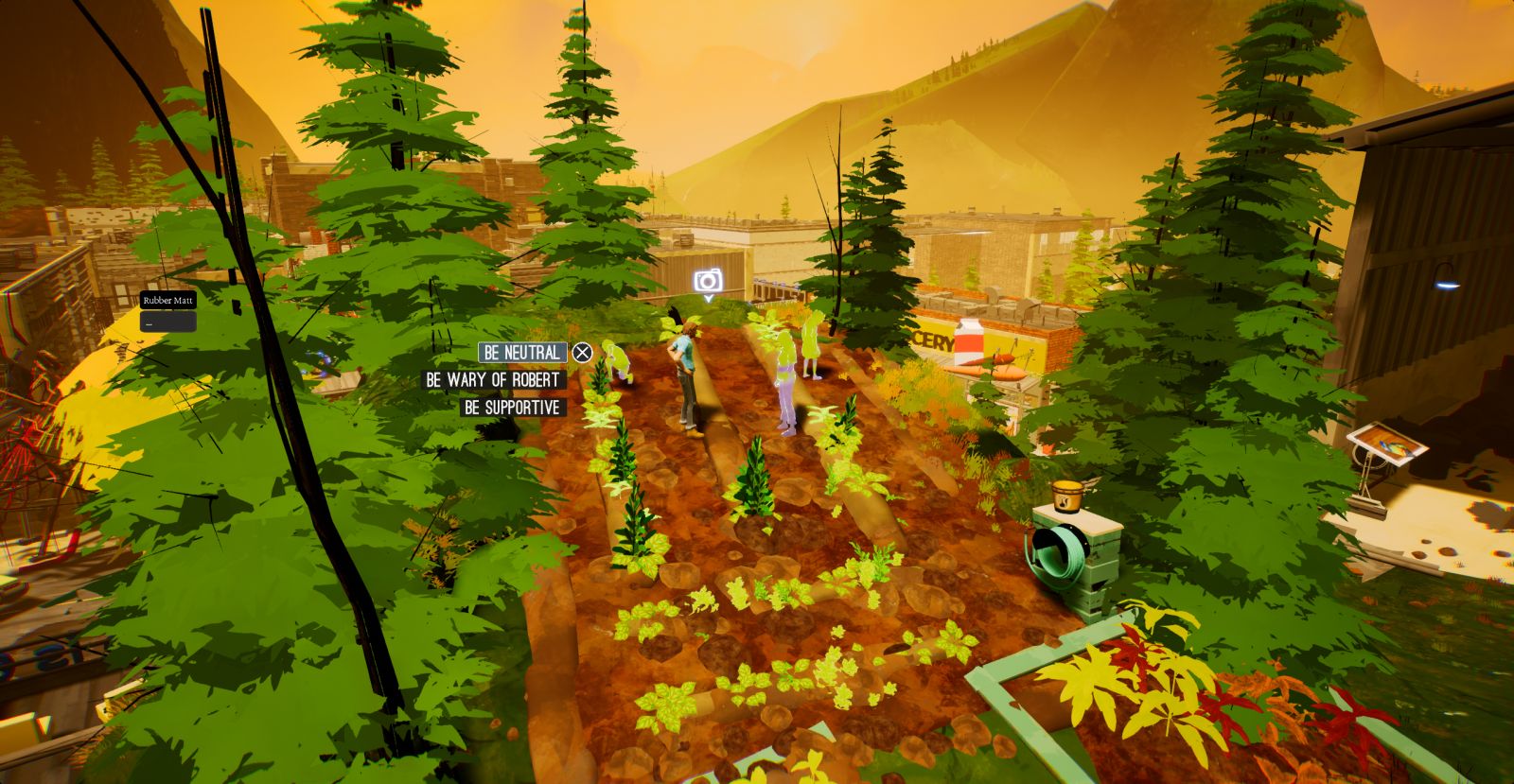 Games often pretend to have meaningful choices that end up never amounting to anything, but Where the Heart Leads makes every choice count. Never did I make a decision in my playthrough that was easy, I always doubted whether the choice I made was best. Additionally, every outcome feels organic, like the choice I made was the canon one that the developers wanted me to make. Of course, that is not the case, but the game even addressed this specific feeling I had in the closing journal entry of the first chapter. I will not spoil the exact quote, but it was on the level of some of the best writing I have seen in video games and television. The best thing I can say about the writing is that it feels like the characters all speak with the rhythms of real people. Hesitations, omittances, deflections, everything feels carefully crafted to match the real life cadence of conversation.

I have not gotten into anything specific thus far for fear of spoiling any of what this game has to offer, but here is one example of a string of choices I made in the game. Spoiler warning for the rest of this paragraph: At one point in the game, Rene, Whit’s wife, asked me to kick my brother, Sege, off of her inherited land. I could have pushed back, but I chose to go along with her wishes, agreeing that my brother had it too easy. Then, on my way through the city I was approached by Robert, the mayor, who wanted to know if we could do some art work for the city. I was then able to either include Sege in the work, or not. I included him, thinking that he could use the money more than me, even though I had my own financial difficulties to deal with. Eventually, we did a few more jobs for the city which led to Sege getting a more permanent job with the city, and the city looking distinctly different according to the types of art we chose to display. This eventually led to more opportunities for the both of us, but I will not spoil those here. The point is, the game allows the player to make one decision that can drastically alter the choices, characters and the town for the rest of the playthrough. The choices in this game are meaningful, well-written and almost never easy.

All of this makes the story work exceptionally well as you traverse the world of a small town where you know everyone and leave a mark on everything. Characters evolve and change as the story progresses, and your feelings toward them probably will too. No one is the same by the end, not even the side characters. The story comes to such a satisfying conclusion that I was left just staring in awe as the credits rolled and I realized what had just happened. 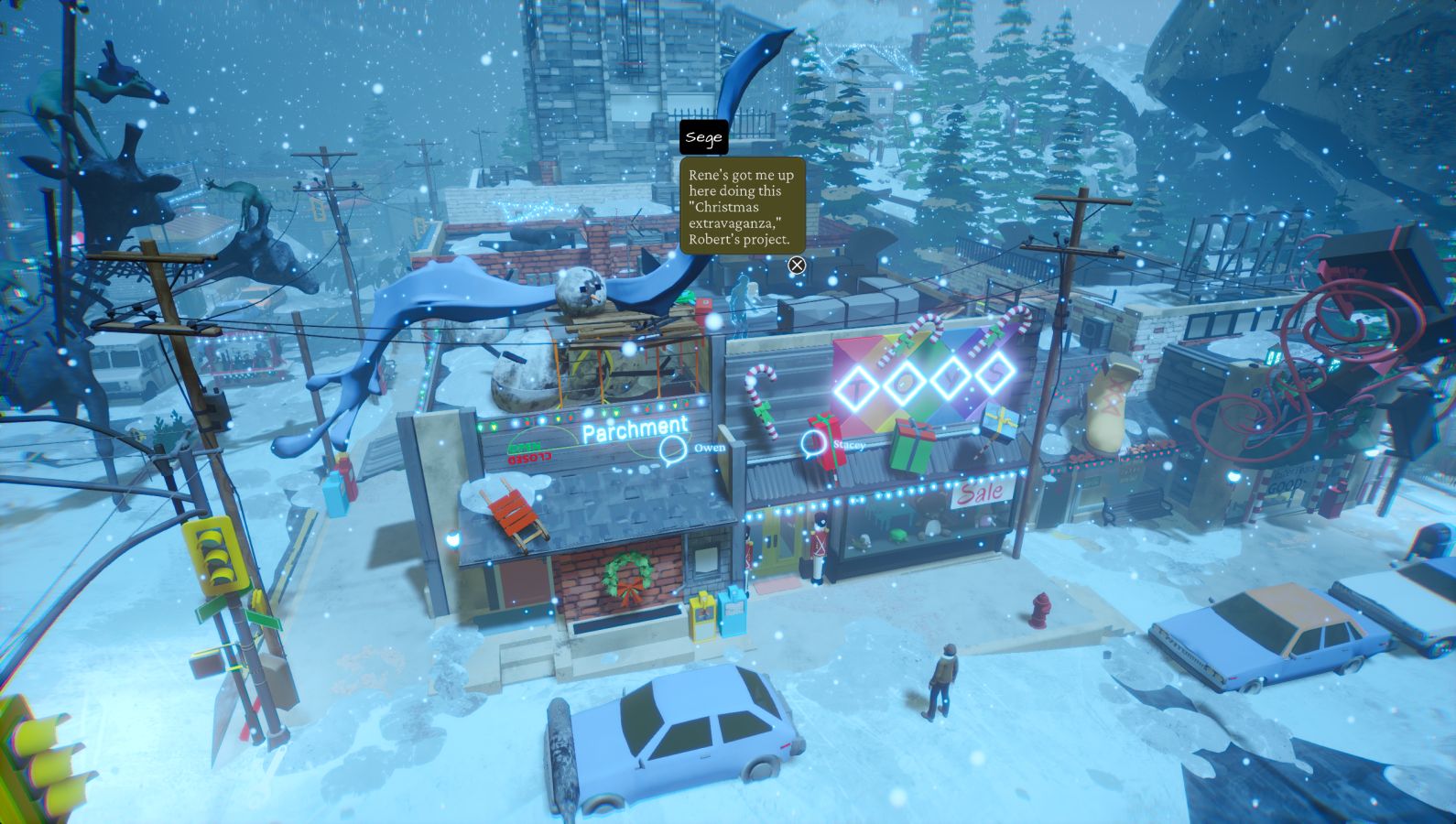 The storybook art style this game employs is endearing with an unexpected amount of detail. Characters are represented mostly as silhouettes, except for Whit who is a fully realized model, but these silhouettes have a lot of character due to their animations and the creative ways that Armature Studio uses them. Despite the fact that the characters do not have facial features in the overworld, I still found myself deeply attached to each of the main members of the story, while finding myself engaged in their story and worried about their outcomes in the big picture. Where the art style shines is in the environmental storytelling. Whit and his brother are artists, meaning that if you choose to do projects for the city, you can have a massive impact on what the city will look like. Let your brother go crazy with his imagination and the city will look like an avant-garde artist’s vision for what a city should be, or keep him grounded and make more traditional sculptures and pieces instead. I chose to keep it somewhere in between the brothers’ two styles, but either way the pieces that you make look amazing and add to the sense that you are really in control of the game’s world. As you play more of the game, the seasons will change offering welcome changes to the scenery as the town takes on a wintery look or an autumnal feel in turns.

I would be remiss if I did not talk about how emotional this game made me as I played it. There was not one session of play (it took me 5 or 6 sessions to beat) that did not leave me with tears streaming down my face. Whether that is your thing or not, I found it cathartic to play through this game with such human and flawed characters. There is a lot to relate to here, and I think that will be true no matter who you are. You see characters at different stages of their lives, at different levels of comfort, wealth and health. The different plot points are believable and the themes that pervade the game are universal in nature. This game elicited one of the biggest emotional responses from me that any game ever has. I would compare the level of catharsis to what I felt while playing Uncharted 4 or Death Stranding, but this was probably more significant. This game is about life, and it has a lot to teach a twenty-something like me, and I think it can do the same no matter who you are.

My only problems with the game came in the form of bugs. There are a few typos that become more prominent closer to the end of the game. Usually I would not note this sort of thing, but in a game that is 80% reading it is a nuisance to see a typo every once in a while, and it breaks the wonderful character immersion. Another problem that occurred more frequently was not being able to interact with different characters when I should have been able to. Often, the game makes you reposition yourself to get to the perfect spot to press X to speak to a certain character, and it can get pretty annoying when you are right in front of a person yet are unable to talk to them. Lastly, one of the lore collectibles I picked up was bugged out for the whole game so I wasn’t able to read one piece out of the hundred I had collected.

The quality of this game from the visuals to the storytelling to the level of care given to the characters far outweighs these few bugs however. The game is exceptional at what it sets out to do, and it may have even given me a taste for more narrative-heavy games like it. I’ll have to replay this one a few times as well to see what could have been.

Where the Heart Leads

Where the Heart Leads is almost impossible to put down thanks to its strong characters, deep story and attention to detail. The game is brought down only by its minor inconveniences such as bugs and typos that detract only a little from the main experience. For fans of narrative games, this is a must-play, but even those who do not consider themselves fans of the genre might find something they relate to in this game.

Noah Anzaldua is a game journalist, Twitch streamer, and a passionate fan of Apex Legends and Destiny 2. Writing and streaming are his passions, and he is carving a career path out for himself. He is a graduate of the University of Alabama where he is majored in News Media, History, and Political Science.
Related Articles: Indies, Where the Heart Leads
Share
Tweet
Share
Submit