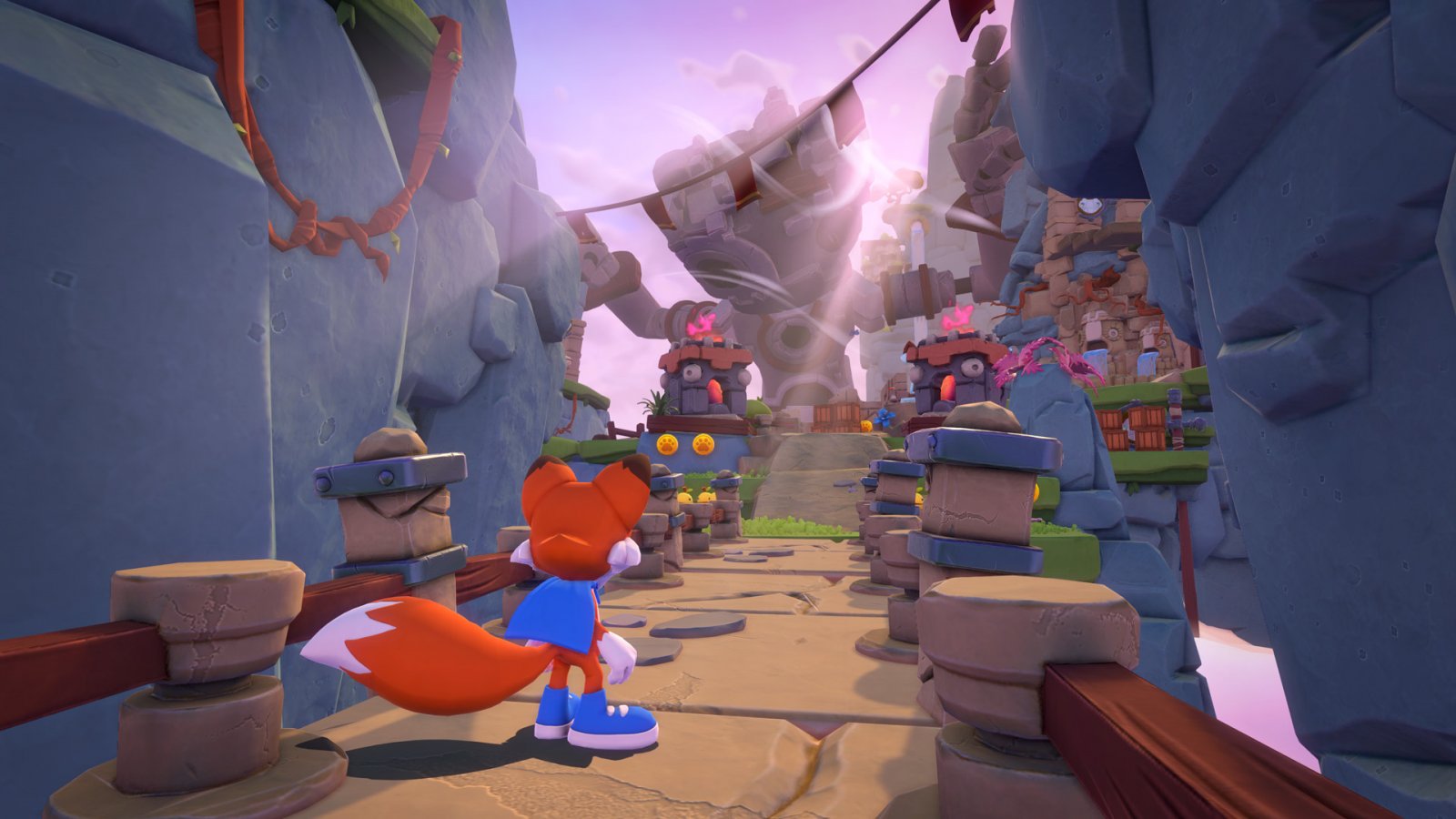 Super Lucky’s Tale is 3D platformer comfort food, no two ways about it. As a big fan of the genre, I found myself in-step with Playful Corp.’s fox-filled romp in minutes, instantly connecting with its gameplay that is more than a little derivative of the tentpole games that clearly inspire it. That doesn’t make Lucky’s Tale bad by any means, it just makes it incredibly familiar.

In Super Lucky’s Tale you play as Lucky– a Fox whose job it is to rescue his sister from a magical scrapbook, or so I understand. While Super Lucky’s Tale does have a narrative thread that is supposed to string the player along to the end, the plot ends up feeling so generic that I stopped paying attention to it after the opening cinematic. Truly, the story beats in Super Lucky’s Tale serve only to shift the player in and out of gameplay scenarios; as like most 3D platformers, that is where the game’s core resides.

The structure of Super Lucky’s Tale is a patchwork of established 3D platforming concepts that are woven together to create an experience that is, on the whole, fairly linear in design. The title is split into four worlds, each with their own theme and hub area. From this hub, you can explore around, collect coins and gems, and enter doors that’ll teleport you to the game’s levels. These hub areas are tight and fairly involved, ringing of Super Mario Galaxy 2’s micro-hub: Starship Mario. There are constantly replenishing things to do, and as you complete more levels, the hubs will become further populated with NPCs and activities. However, the levels themselves are far more Crash Bandicoot than they are Super Mario Galaxy.

By and large, Super Lucky’s Tale navigates between traditional, 3D platforming stages, and 2D ones, which serve to break up the game’s pace in a similar way to Naughty Dog’s platforming series. However, the comparison doesn’t stop there, as the levels in Super Lucky’s Tale borrow heavily from Crash’s design philosophy. The 3D levels are, by and large, very linear, chock-full of enemies, hazards, sub-areas, and collectibles. On the whole, they’re well designed and feature interesting motifs; from a barnyard music festival to a spaced-out swamp carnival, the game throws Lucky into some very unique situations that toe the line of absurd, again much in the vein of Crash Bandicoot, down to character designs and tone. One thing that Super Lucky’s Tale doesn’t take from Crash though, is its difficulty.

Super Lucky’s Tale is certainly aimed at a younger demographic, evidenced not only by how painfully easy it is, but by how shallow its mechanics are. You’ll be platforming about without breaking too much of a sweat, which does lend the game a fairly laid-back vibe, but you cannot scale this experience up if you’re itching for a challenge. In Super Mario Odyssey, a far from challenging game, a more ambitious player can increase the difficulty, or at least add more nuance to the gameplay, by learning the game’s advanced movement. There is a surplus of mechanics to experiment with in Super Mario Odyssey, in contrast to Super Lucky’s Tale which has a dearth of them. With only single jump, double jump, and digging mechanics, there isn’t much to learn here; what you see is what you get. Frankly, it’s a big missed opportunity; with more moves at my disposal the title’s low difficulty wouldn’t have been so noticeable.

With that said, Super Lucky’s Tale doesn’t play poorly at all. In fact, what little is here, is very polished. Jumping felt sharp, and I felt entirely in control. This is of huge importance to me; if a platformer feels off, it has failed. The jump is the bedrock of any platformer, and Super Lucky’s Tale has this down. However, its camera control isn’t there to match the fluidity of the jump, which does lead to some pretty frustrating depth-perception issues. At several points during my adventure, I found myself jumping to where I thought I’d land on an enemy, only to land around them, taking damage in the process. Full camera control would have alleviated this, but as it stands, the camera can only be pivoted, not moved in full 360 degrees.

Naturally, this isn’t an issue during the 2D levels, which are far less numerous than their 3D counterparts, but are in many ways stronger. For a start, they demand somewhat more precision than the average 3D level, which did force me to act a bit more diligently here. Likewise, due to their confined area and emphasis on precision, the level designs felt more meticulous and focused than that of the 3D areas. Again, nothing here is particularly new or fresh, but it does feel more engaging, complemented by some very nice motifs. However, these did come off as more derivative than the 3D ones, pulling heavy inspiration from series such as Donkey Kong Country.

That latter comparison runs a bit deeper though, as Super Lucky’s Tale has myriad collectibles, including its own set of KONG letters, instead spelling LUCKY. In addition to these hidden items, each level has a secondary clover to find (clovers act as this game’s Power Stars) and hundreds of coins to collect, with 300 rewarding the player with yet another clover. These are very fun to collect, and do layer on some more engaged gameplay, much in the vein of the Kirby series. The core platforming isn’t going to push the envelope, but finding all the tucked away secrets did force me to look in unconventional places, while never feeling as though the items were hidden unfairly.

This is well and good, but Super Lucky’s Tale commits the cardinal sin of forcing collectables on the player. To unlock the boss room in each world, you must accumulate a certain number of clovers, reaching into the 70’s to access the final boss. By simply completing each level and moving on, you won’t even have half of the clovers needed, so you’re forced to collect anything and everything you find. I very much dislike this design philosophy, as turning optional collectables into mandatory tasks just feels like padding. It is understandable why the developer chose this tactic, as I was able to beat the game front to back in five hours, but I’d rather the game had been four with no padding, leaving the collectibles to be actually optional.

While drawing so many direct comparisons to other 3D platformers might seem unfair, Super Lucky’s Tale simply is incredibly derivative. While it does have some unique ideas, this is a genuine case of been there, done that. The game even has a very suspect clover collection animation, which does a bit more than pay tribute to Super Mario Sunshine. All things considered, the game feels like a patchwork quilt, assembled from different aspects of different games that the developers no doubt have a deep appreciation for. I just would’ve liked to see the game do a bit more of its own thinking, because while we’ve never seen all of these elements assembled in this fashion, each element can be traced directly back to its origin.

As I’ve stated above though, the game is unquestionably derivative, but it is still fun to play, especially for the platforming enthusiast. It has its issues, undoubtedly, but if you go in expecting an easy, familiar trek that nods at some of the genre’s greats, I’d be hard pressed to imagine someone walking away disappointed. I had an overall positive experience during my five hours with the game, but I’ll be struggling to remember much of this one in six months time. But, at $20, I’d consider giving this one a look, especially if you’ve already snagged all of Super Mario Odyssey’s Power Moons and you’re looking for more colorful platforming fun.

Super Lucky’s Tale is a very predictable 3D platformer. It checks all the boxes it needs to while drawing heavily on the genre’s tentpole titles. Due to that derivative nature in conjunction with the title’s very low difficulty and padded progression, Super Lucky’s Tale is a hesitant recommendation, and only for the hardcore platformer fan. There is some laid-back fun here, but nothing about this title pushes the envelope in any substantial way, and won’t be supremely appealing to a non-fan of the genre.

Abram is an aspiring games journalist with a soft-spot for titles published by a particular company that starts with N, and ends with -intendo. When he's not playing, or writing about, video games, Abram is most likely ranting to no one in particular about various films he's seen, or grabbing the sketchpad to do a bit of drawing.
Related Articles: Super Lucky's Tale
Share
Tweet
Share
Submit