I’ve appreciated the Mario sports legacy through the years, but Mario Golf has been an odd one for me. While I’ve skipped all the portable iterations of the game, I was excited to finally get a new console installment in the form of Mario Golf: Super Rush. I’m not really a fan of regular golf, but put Mario characters in the game and boom! It’s an instant classic. While the game does hit the rough a few times, it’s mostly a fair experience that chips into a hole in fun. 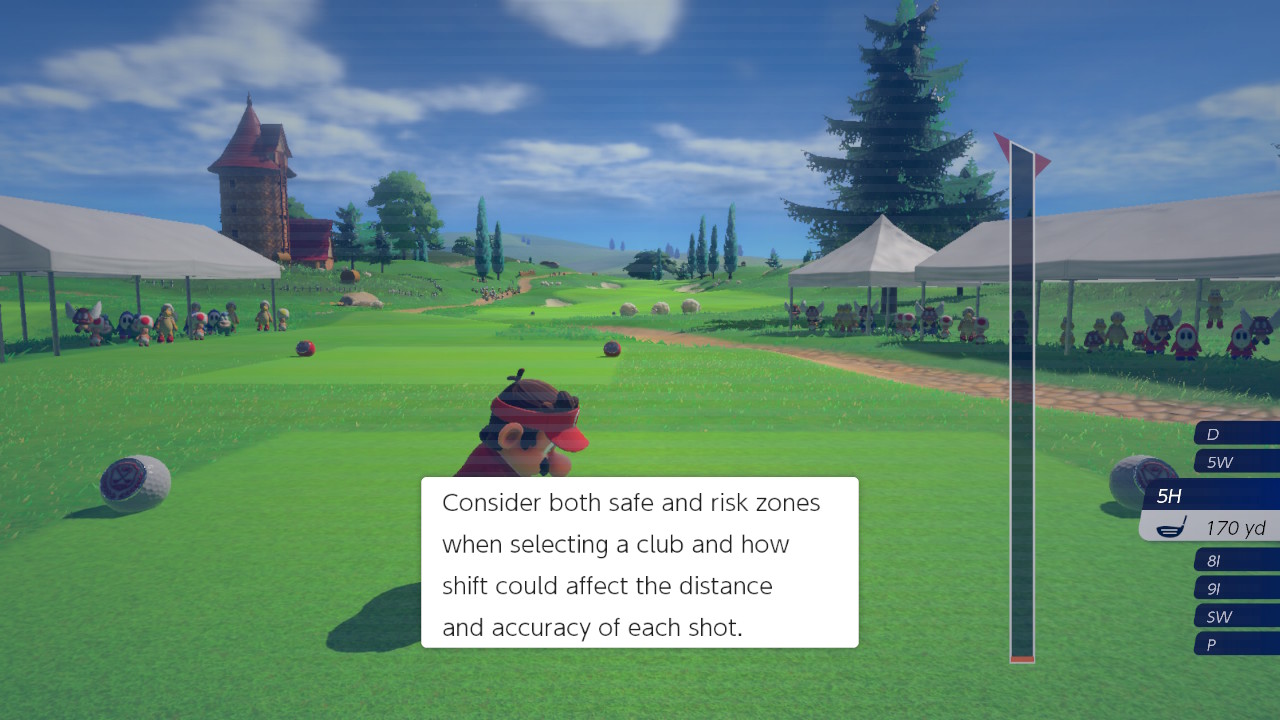 Much like tennis, golf is a surprisingly technical sport, with a bunch of terms flying through the heads of casual players. While you could boil down the gameplay to “hit ball into hole”, there are still a ton of intricacies that go into making the perfect shot. Thankfully, Mario Golf is easily accessible to players of all skill levels, and it can be as easy or as complex as you want it to be.

The standard mode is the classic and purist golf experience we all know and love. Up to four players take a swing at six different courses of 18 holes each as you try to reach par (or under par). This is easier said than done, because you’ll have to take into account which clubs you’re using, the power of your current golfer, and even if you want to use a character-specific power shot. Thankfully, most of your decision making is easily calculated thanks to an intuitive system that helps you line up shots correctly.

That isn’t to say you should always rely on these systems, however; much like playing Smash Brothers with only special attacks, if you don’t get into the specifics of shots (like hooks, slices, and fades), you’ll just keep swinging and heading into the bunker (or worse, the water). It’s here where Super Rush shines, as experienced golfers will get the upper hand with learning how to navigate through the terrain of a hole. It reminds me of when I played the original Mario Golf 64 with my uncle, a seasoned golfer; I was missing my putts while he would land far shots with ease because he could calculate slope and terrain of where he was going. You get what you put into Mario Golf, and I appreciate that.

Now standard golf is fun, but admittedly it doesn’t make Super Rush stand out; that’s what speed golf is for. It seems like Nintendo wants everyone to hurry up (as anyone who has played Mario Party: Star Rush can attest to). With this mode, you all take turns simultaneously, not waiting for your opponents to take their swings. Now you have a stamina bar to deal with, and in order to get to your ball you’ll need to dash and run to it. 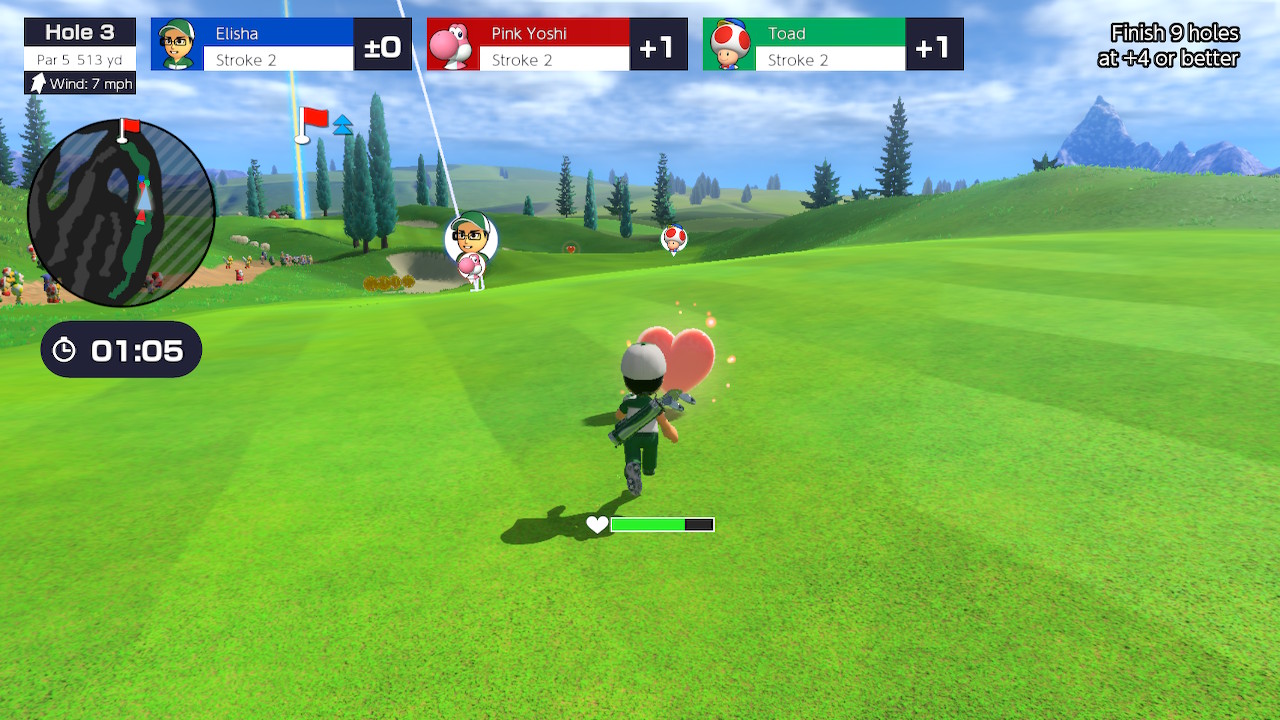 This is where the choice of character matters, as each one of them has different running speeds and special dashes. You got a juggernaut like Chargin’ Chuck who can plow through opponents with ease, but is a bit slower than the rest. Alternatively, someone like Yoshi is a bit faster and can distract opponents with an egg toss. Speed golf barely qualifies as golf, but it’s hilariously fun. That said, it can sometimes be a bit tedious since the platforming here is less than stellar. It’s also a bit unbalanced since you can knock your opponents’ balls away with a well-timed dash, which doesn’t make any sense but hey, it’s there. Additionally, if you want to play with friends on the same console, you can only have two players simultaneously instead of four. I get it’s probably for performance reasons, but I think it would have been cool to have a four-player speed golf round here as well.

If you want more unfair (but even more fun) gameplay, you’ll need to check out the Battle Golf mode, where the game functions more as a battle arena where you compete against clearing holes before anyone else. (This also is reminiscent of another mode of the game, XC golf.) While there are only two different arenas from which to choose, this is offset by how bonkers the game gets, with Mario-centric powerups and hazards coming from all sides. Sometimes it’s a bit annoying when you land a shot perfectly only to get blasted by a Bob-omb in the way, but because everyone’s dealing with the same mess, it’s oddly charming. Think of it like Smash Bros. with items and you’ll get the hang of it. Again, this makes it even more egregious that this mode can only be played with two players on the same console, but it’s still quite worth it offline (or online, should you choose to play there). 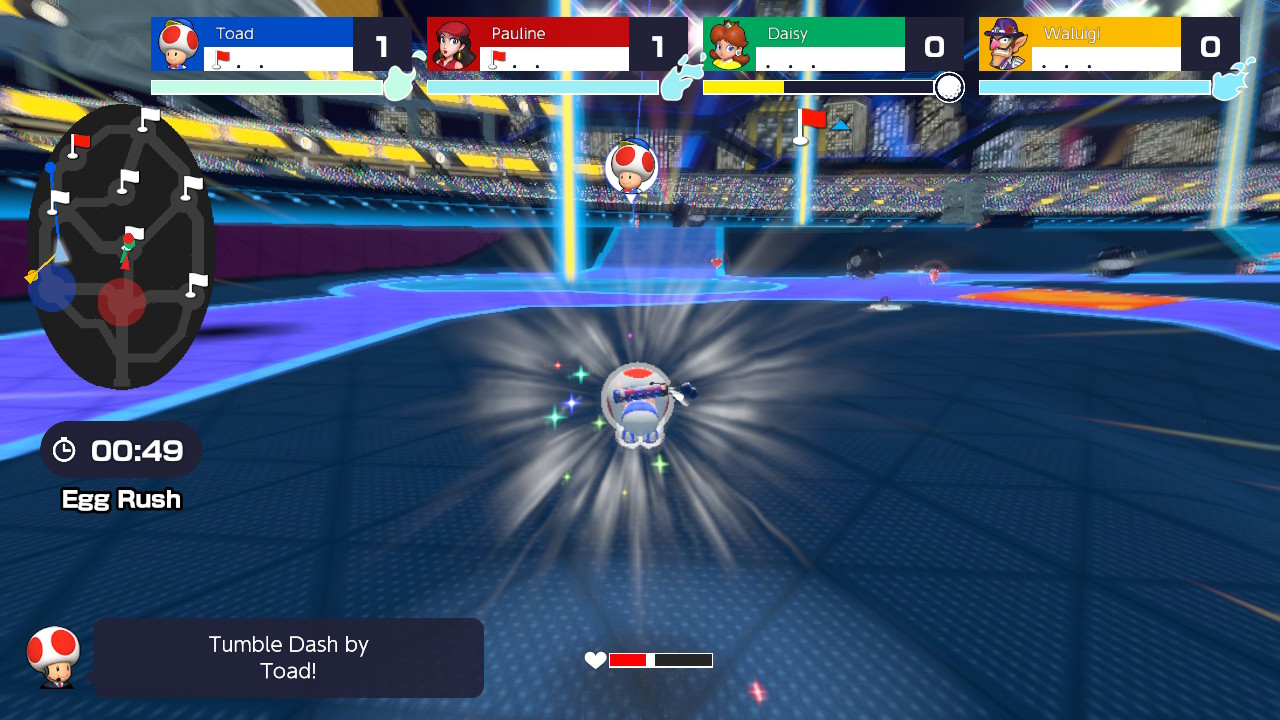 I haven’t played the portable Mario Golf games, so I’m not familiar with the RPG modes within those titles, but Golf Adventure here is a nice single-player experience if you’re trying to train for better holes. I would personally recommend going here first if you need to practice, as the campaign here eases you into the game quite nicely. It goes through the courses at a piecemeal pace (so you’ll play a few holes first before going into the whole course), which means you’ll have time to get used to the terrains of each location. Here, we also get a decently written campaign filled with E-rated jokes and some interesting dialogue. For those who missed out on Miitopia earlier in the year, you’ll be glad to know you can use a Mii in this mode as you improve your character. 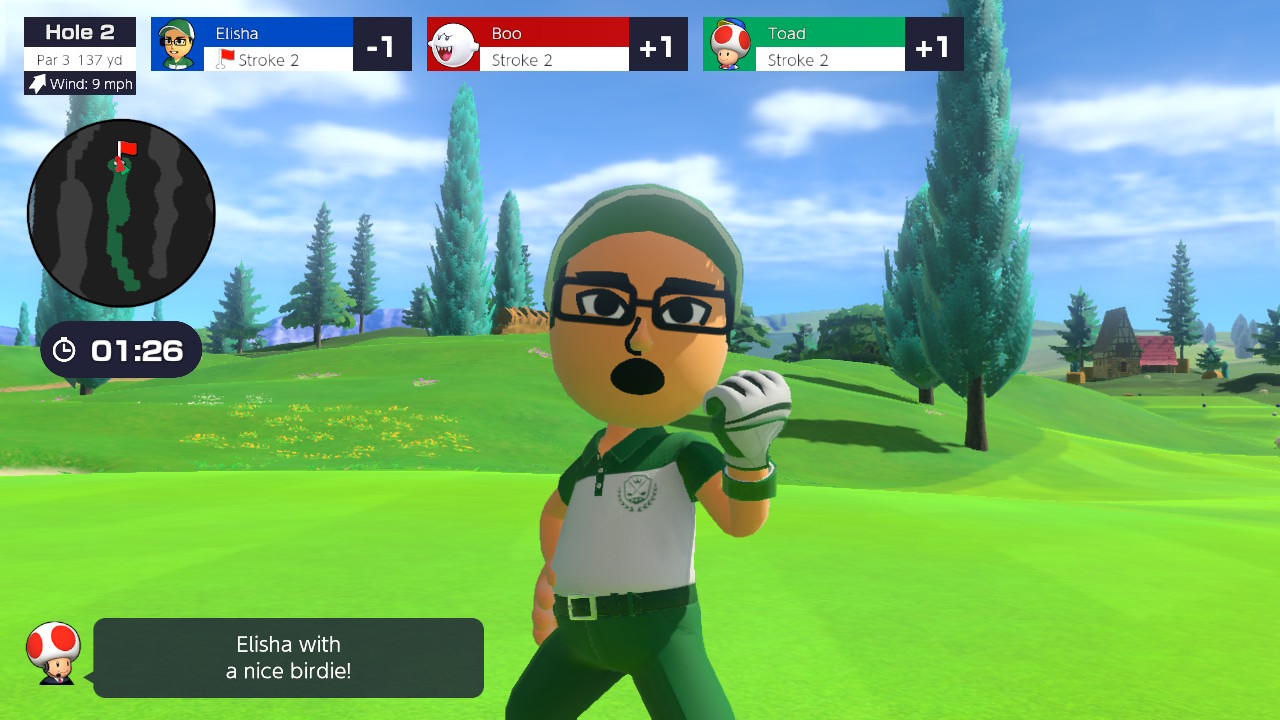 While I can see Golf Adventure not being everyone’s cup of tea, I quite liked the campaign; it’s an easy way to train, and it benefits your Mii character as well, who can play with the big leagues in other modes. Since your Mii is pretty weak initially, you’ll need to train them in order to match clubs with the main stars. The RPG mechanics are a nice touch to single-player mode, and while the dialogue isn’t up to par with, say, Super Paper Mario, there were still a few bits that I chuckled at. Here, you can purchase different clubs that will react to different situations, like a Lakitu club that’s highly susceptible to wind. Related to this, there are some courses where you can’t bring every club with you (and in Speed Golf events, bringing too many will slow you down); it’s these moments of strategic thinking that really made me appreciate the RPG mechanics of Super Rush. The fact that some clubs won’t be brought along with you means you’ll need to strategize, and that missing equipment will sting later in the game a la Etrian Odyssey. All in all, it’s a fun mode that rounds out the package nicely. 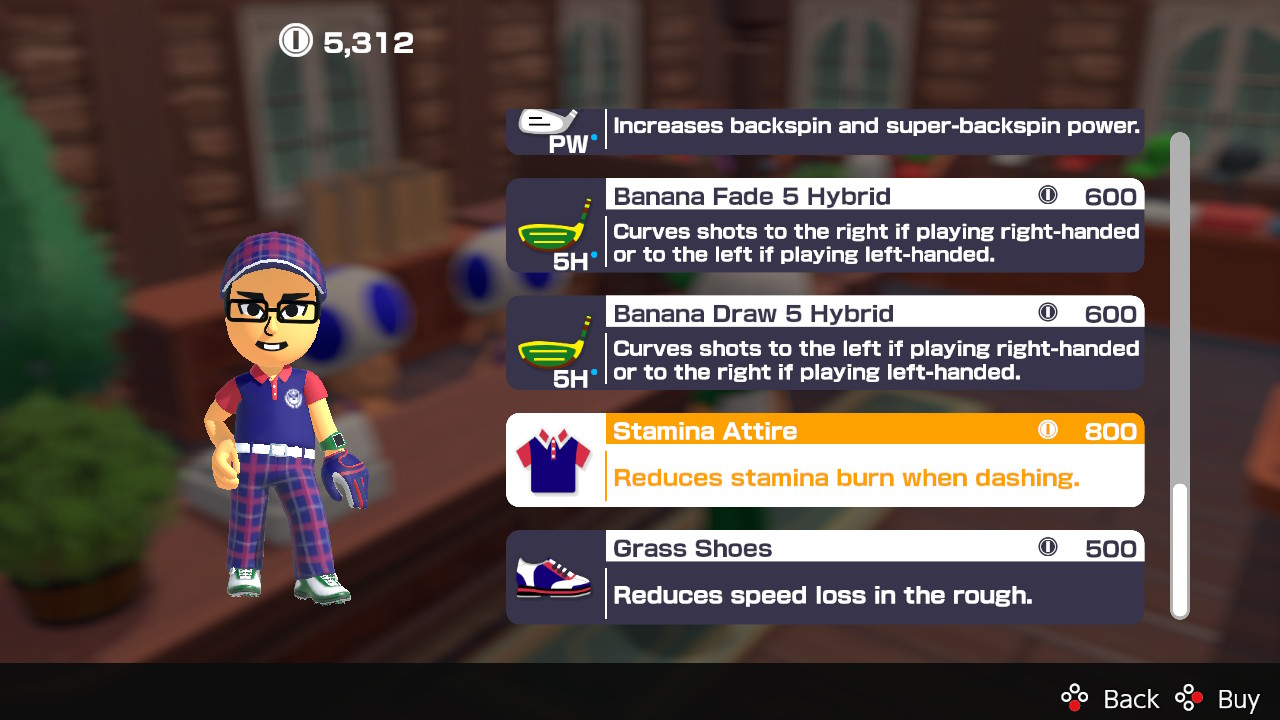 In terms of overall presentation, the game looks adorably pretty. We’ve got Wario and Toad drip, and Bowser’s got a cool uniform too! It runs smoothly on portable mode, and blown up on the television, it looks quite nice. The soundtrack has that Mario charm, and I enjoyed controlling the game.

Now here’s a point of contention: The content you’re getting here. Like Mario Tennis Aces, Mario Golf: Super Rush will have free updates via DLC in the future. In this case, however, I think it’ll be much better since these will include more courses eventually. Six courses with 18 holes a piece is a fine golf package for me personally, but I can see some being a bit distraught about that. (For comparison, the last console entry also had six courses plus a bonus par 3 challenge one.) The way that holes are used within the game itself is fine, however, and there’s a lot of replay value within these locations; free DLC will also sweeten the pot too. However, the roster of 16 characters feels a bit empty and that’s something I think should have been fixed before the base game launched. It’s especially egregious since Toadette’s in the single-player campaign mode yet is replaced with Toad in-game! I can definitely see her being one of the first post-game add-ons; make it happen, Nintendo!

Whether you easily land birdies or struggle with bogeys, Mario Golf: Super Rush is a joy to play with friends and family. With accessible controls and mechanics that appeal to casual fans and hardcore golfers alike, there’s a lot to love with this Mario sports title!

Elisha Deogracias is an aspiring accountant by day, freelance writer by night. Before writing for Gaming Trend, he had a small gig on the now defunct Examiner. When not being a third wheel with his best friends on dates or yearning for some closure on Pushing Daisies, he's busy catching up on shonen manga and wacky rhythm games. Mains R.O.B. in Smash. Still doesn't know if he's a kid or a squid.
Related Articles: Mario Golf: Super Rush
Share
Tweet
Share
Submit