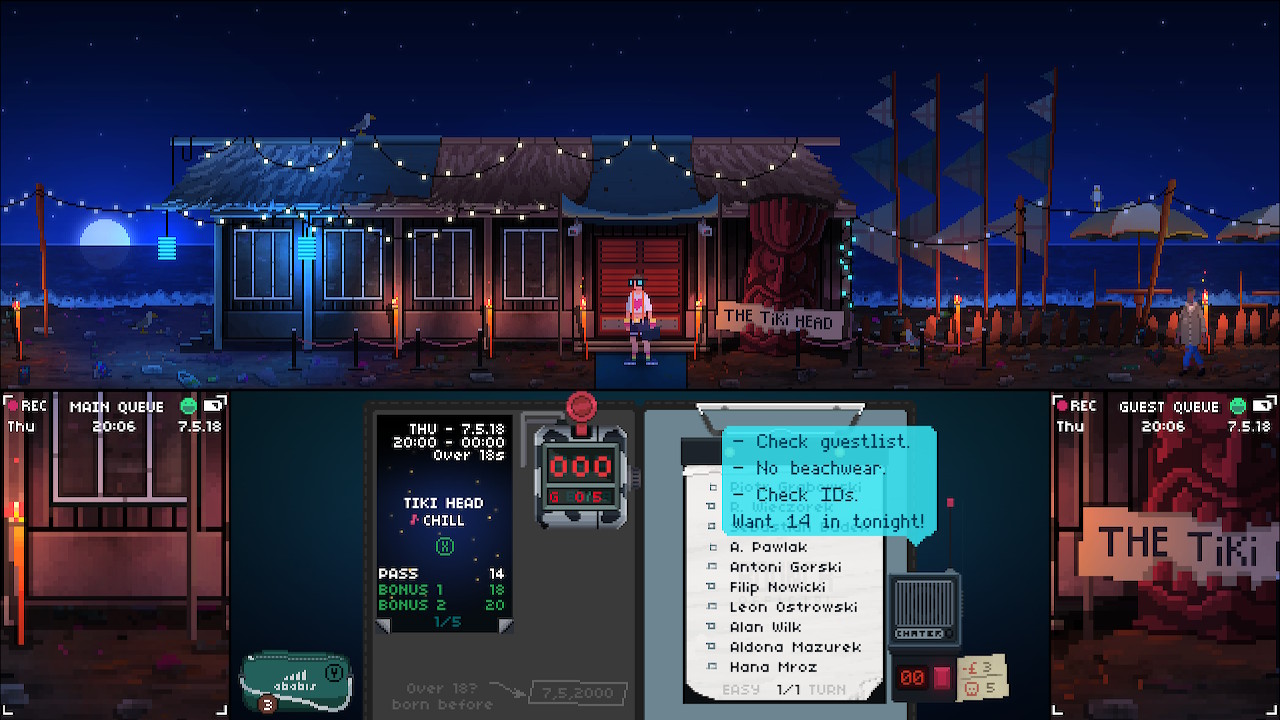 Not Tonight has you doing the same thing every day. You look at IDs, weed out the underage, the fakes, and those from banned countries. You do it night after night. It’s repetitive and stressful. I love it.

I know I may have scared you away but let me assure you now that Not Tonight is a fantastic game that is definitely worth your time. It is funny yet serious in the way it tackles real problems and problems that are all too easy to imagine. Not Tonight takes place in a Post-Brexit world where you are marked as a Euro and no longer wanted in Britain. In this world, you are considered an immigrant who must struggle to stay in the only home you have ever had. This means taking a job as a bouncer that often has you keeping out other immigrants. While I’m not in Britain, I am in the United States where we have Trump so I definitely get it. 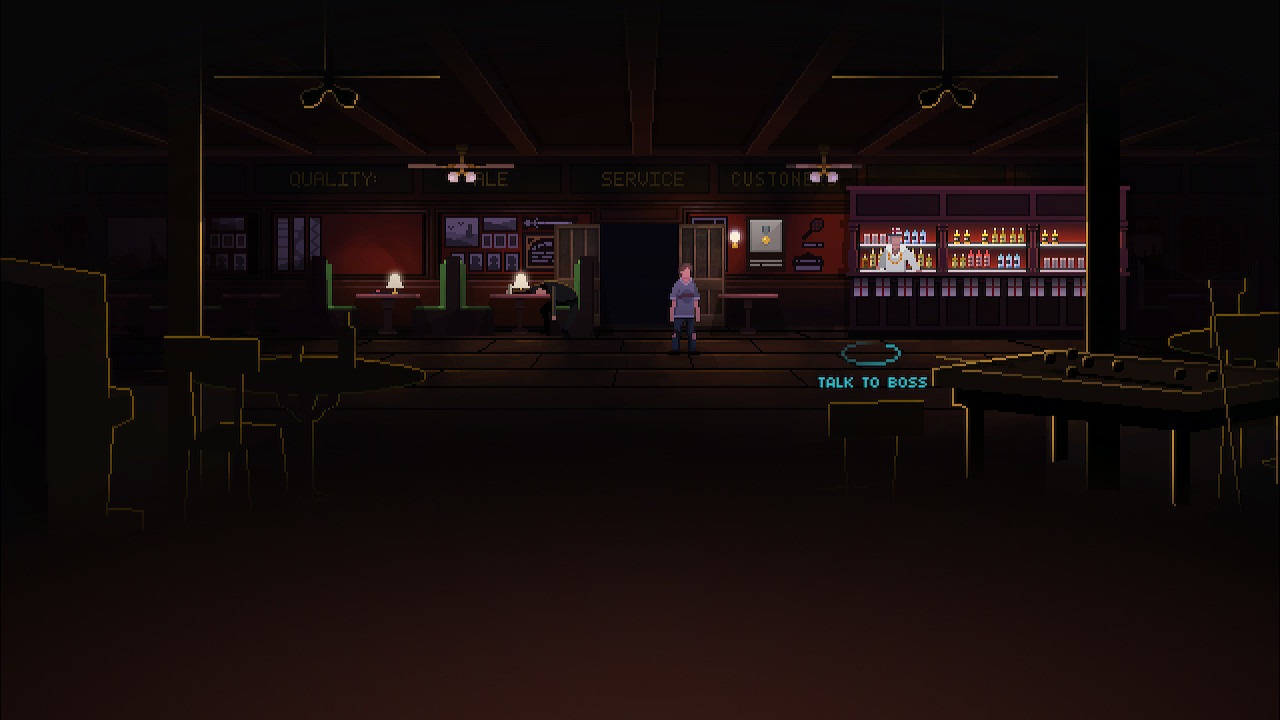 It’s not much, but it pays money. You can’t really ask for more than that.

For the most part, you will spend the game working for a variety of different people and places trying to make money. Once you do a good job for somebody three times, they upgrade you to their head doorman. This gives you double pay but also increases the difficulty. It also gives you access to items you will need to complete side objects such as giving a man his disco medal back. It’s a fun incentive to keep working the same jobs while also exploring what items and perks new employers bring.

Not only do you have to worry about working and checking IDs, but you also have to be on the lookout for a more… unsavory way of making money. Drugs. Buy some drugs and sell them to the right people to make some extra money on the side. These people are always easy to spot, I mean one of them has a giant cheese hat on, but you always have to give them a double look just to make sure they aren’t an undercover cop.

What makes Not Tonight truly engaging is a sense of risk and reward. You see, selling drugs sounds simple, but it comes with a consequence. The player has something called a Social Score. A high social score means you are a productive citizen, and a low score puts you at risk for deportation. Selling drugs lowers that score. This puts you in a constant state of worry. You may need the money, but going overboard can cause you to miss out on jobs. No jobs means no money which means you are kicked out of the country and it’s game over. 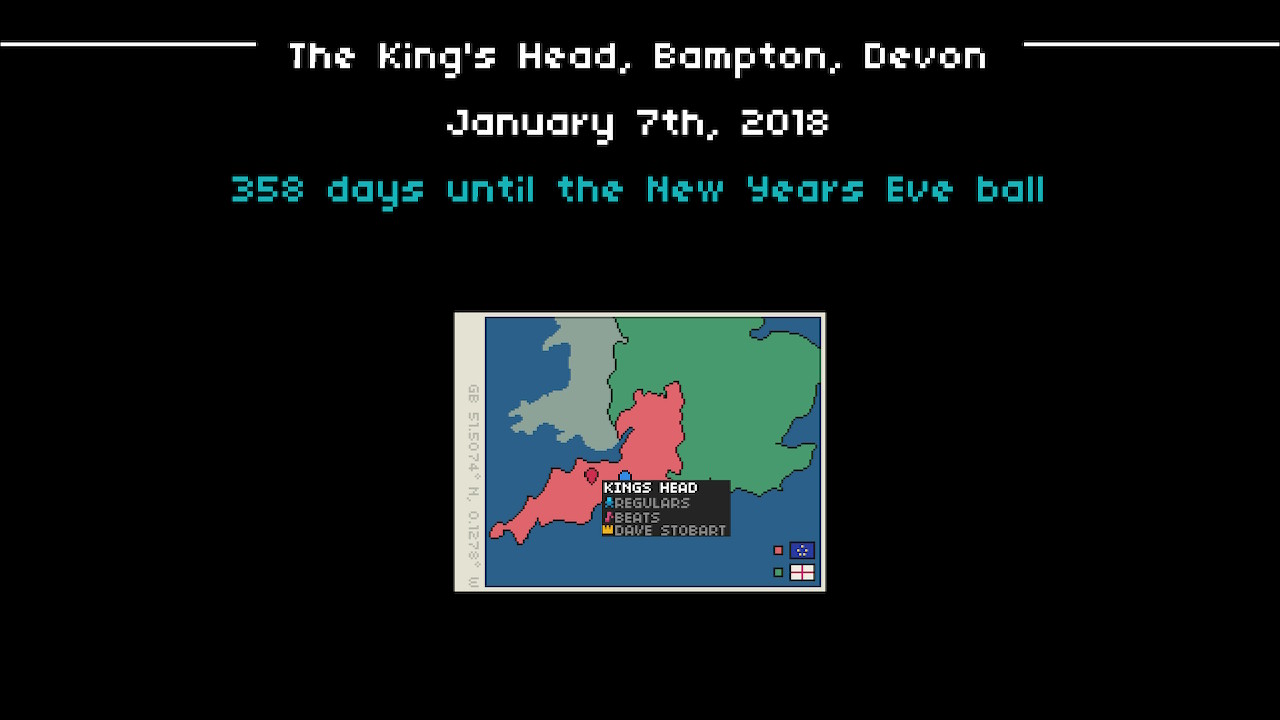 You get a nice map that updates with new places as you work more jobs.

This risk and reward system isn’t just in play in play with a few systems, it is built into the entire game. Those underage kids you turn away? Some of them may slip a little extra money your way for you to let them in. However, you can only have so many mistakes before you are fined or forced to leave early. Is that extra money worth this risk? You WILL need the money. Not only do you have to keep paying bills, but you also have to look after yourself. This means taking a few days off, buying things for your rundown apartment, and just trying to keep yourself healthy. No matter what you do, there always seems to be more that needs to get done.

While I love Not Tonight, there is one thing that annoyed me. Some of the people you work for have you monitor for a dress code. While the low detail pixel graphics look great regularly, they are horrible for being able to discern specific pieces of clothing. You only have a small corner of the screen to look at the people you are IDing and this makes it difficult to tell sometimes when they are wearing banned clothing. It also, to a lesser extent, makes it difficult to tell when they have a fake ID picture. Normally it isn’t too hard to tell, but occasionally you get one where the only difference is the hair is slightly different and those are hard to tell. 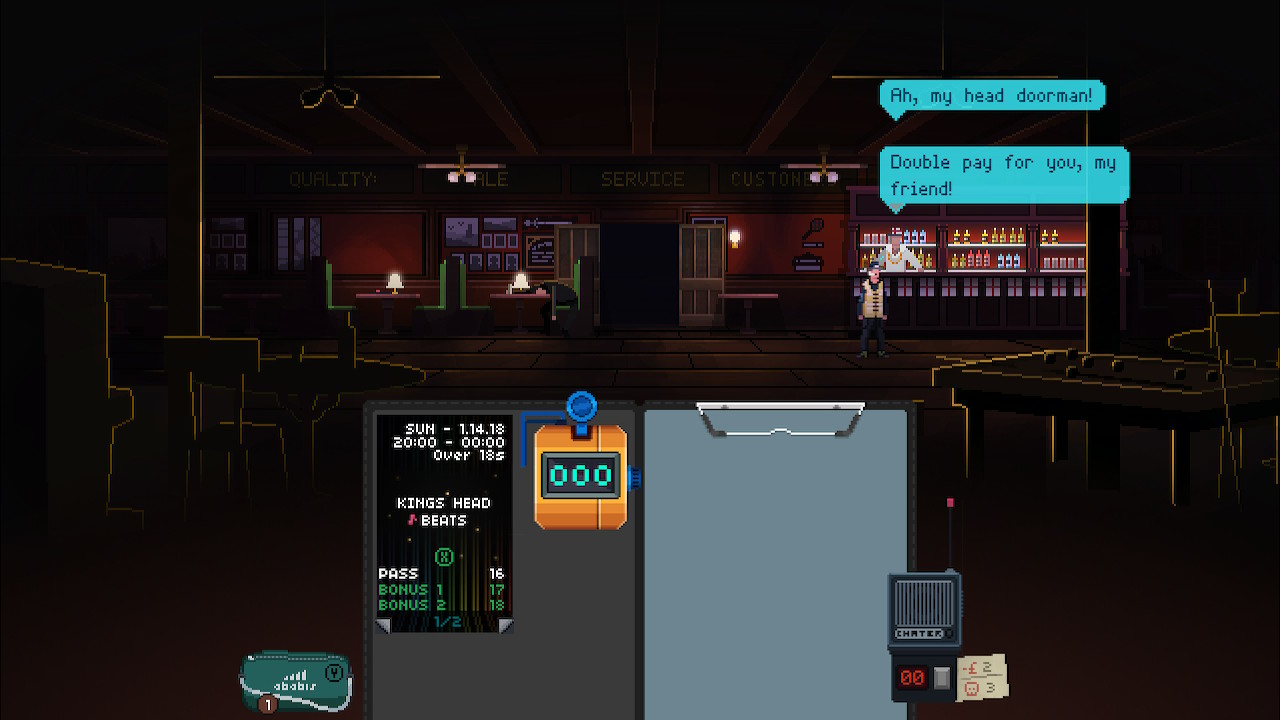 I wish I got double pay for working three days.

Another small gripe I have is that every time you make a mistake a text box appears to tell you what you did wrong. This is useful so you know what to look out for but it also pops up right over the guest list. So I just have to wait for it to disappear before I can keep checking people in which is a real problem when you have a set time limit where you have to let a certain number of people in.

Not Tonight is more than just checking IDs, there is also a story of resistance if you care to follow it. You don’t have to, you can keep up the daily grind but I enjoyed the story. It introduces interesting and humorous characters and adds an extra layer of depth. It’s a simple tale of overthrowing a tyrannical government but it works well here. The main draw here is that just about every conversation is hilarious. The writing is top-notch here.

Not Tonight: Take Back Control Edition also comes with the One Love DLC. It’s a funny, short addon that is worth a playthrough. You get to play as Dave from the main story as he reluctantly tries to find love. Along with the usual ID checking, it also adds drink-mixing to the mix. 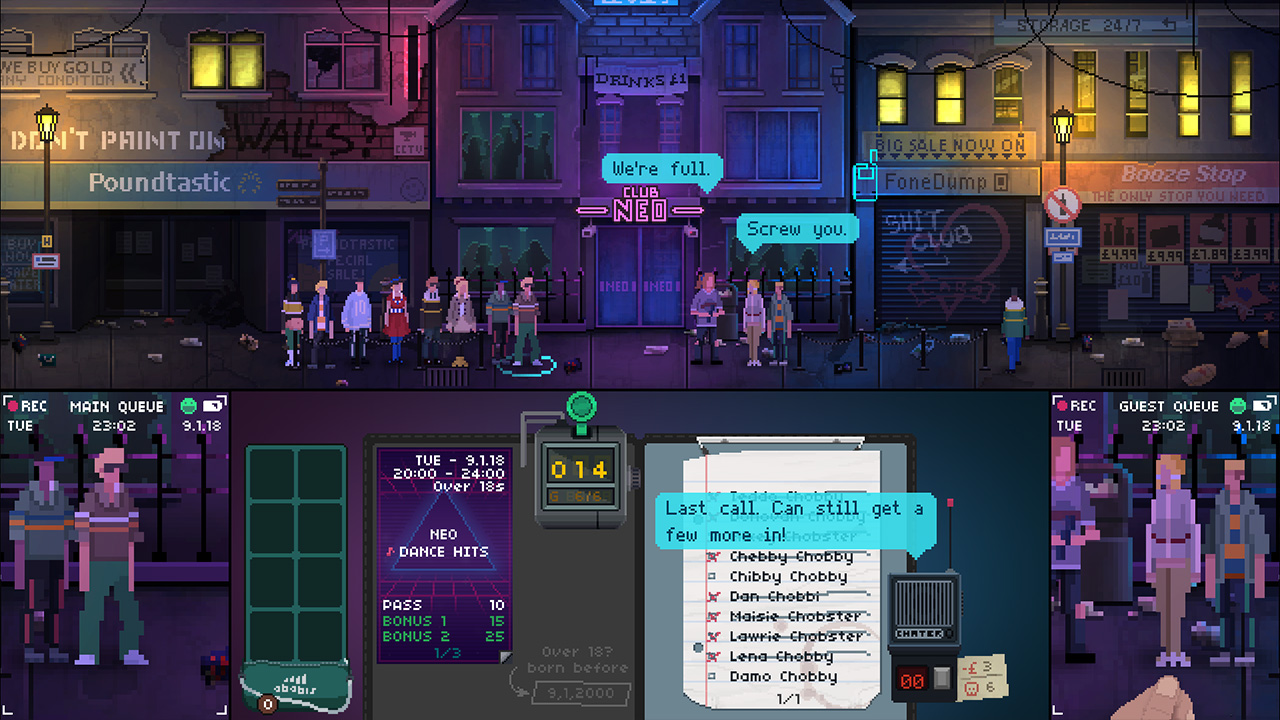 Why must the text get in the way of the guest list? I need that!

Not Tonight also features a few different challenge modes. I found this fun to go through with a friend just to see who can do the best. There is an endless mode, a time challenge, and a playlist mode where you can play community designed levels. I didn’t spend too much time here, but it is a nice addition and a great way for some risk-free practice if you find yourself struggling with a certain aspect.

Not Tonight: Take Back Control Edition is equal parts stressful and fun. The risk and reward approach had me questioning my decisions while the perfect difficulty curve made sure I was never bored. The story is simple but effective and very fun. Not Tonight is simply fantastic in all regards.

Not Tonight: Take Back Control Edition

Not Tonight: Take Back Control Edition is equal parts stressful and fun. The risk and reward approach had me questioning my decisions while the perfect difficulty curve made sure I was never bored. The story is simple but effective and very fun. Not Tonight is simply fantastic in all regards.

Austin Fern has been playing video games his entire life. The first console he truly fell in love with is the PlayStation 2 with Sly Cooper, God of War, and many others really leaving an impression. He enjoys all genres of games from FarCry 5 to Danganronpa and everything in between.
Related Articles: Not Tonight: Take Back Control Edition
Share
Tweet
Share
Submit