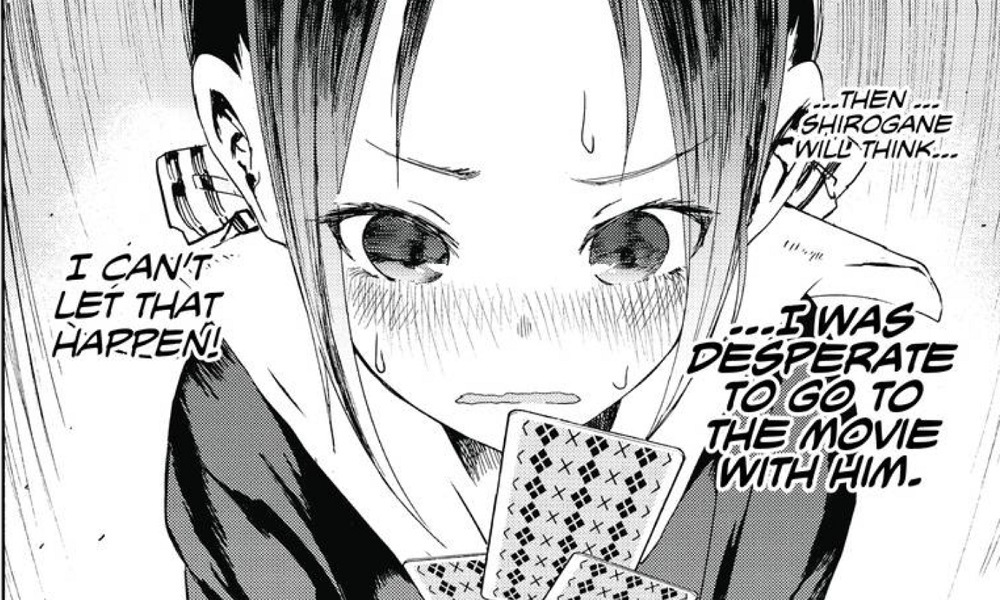 Unrequited love is a tried but true trope in shojo manga, and gets thrown around a few times in shonen manga as well. It’s pretty funny to see two people madly in love with each other but fluster around ways to declare it, even when everyone else does. Kaguya-Sama: Love is War tries to flip this trope around, but ends up creating some inconsistent pacing and an unlikable pair of characters as a result.

Remind me never to go to the movies with these two.

In Shuchiin Academy, there are a couple of cold and calculating individuals that lead the student council; the vice-president Kaguya Shinomiya and president Miyuki Shiogane. Assisted by secretary Chika Fujiwara, the two students are admired by the whole school as they work together to improve their classes. However, while they have different upbringings (Kaguya being the daughter of a wealthy businessman and Miyuki coming from a modest but studious family), they have the same dilemma: they’ve grown on each other! However, their hardened personalities mean that neither of them are willing to show their true feelings, and it soon turns into a series of games and battles with the loser being the one who finally admits their love.

At first glance, I actually enjoyed the premise, as the “will they, won’t they” plotline is a solid (if somewhat overused) one. The first few stories (such as convincing the other person to ask them to the movies by playing a game of Old Maid) are actually pretty interesting, and the art style reflects more of a shonen one, with action and suspense emphasized over romance and character interaction.

However, once delving into the first volume, I felt a little jaded at the future of the series. The main thing that really makes this trope shine is the fact that you’re rooting for at least one of the characters involved in the relationship, but by the time I finished reading the first ten chapters, I didn’t feel like either character actually wanted to be in a relationship. Both characters excel in their respective areas, but their general incompetence with love feels like their only flaw at times.

Kaguya is a fish out of water when it comes to “commoner” things (she gets stressed over picking a movie seat and ordering a ticket, something that her servants would do for her), and her character arc is one where she wants to get out of her rich lavish life and experience what a normal schoolgirl would. Unfortunately, she doesn’t show this and ends up being more of a cold character that doesn’t want to lose her competition with Miyuki. Speaking of which, Miyuki is also very competitive, which is a detriment when the student council trio just wants to have fun. This obsession causes him turmoil on even the most innocuous things, and the interactions and thoughts between the two of them feel like bitter rivals rather than conflicted lovers. From the first volume, I really don’t want either of them to win or lose.

That being said, the character I enjoy most right now is Chika, the council secretary. Sheltered by her parents, she’s perky and acts as a bubbly foil to Kaguya and Miyuki’s calculated and rational disposition. She’s also… well endowed (which is a plot point in one of the chapters, surprisingly), and is oblivious to the duo’s shenanigans. She provides much of the levity for the story (the other entertaining parts being the genuine glee of the duo’s plans backfiring on themselves). I really enjoyed the friendship between her and Kaguya (which is oddly more supportive and kind than the supposed relationship between Kaguya and Miyuki), and it’s this volume’s saving grace from a rather cynical rom-com.

It’s these moments that actually humanize the cast. So thanks for being you, Chika.

The first volume of Kaguya-Sama: Love is War holds promise for the series, but its main protagonists are a little too cynical to fully appreciate the premise of this otherwise quirky manga.

Elisha Deogracias is an aspiring accountant by day, freelance writer by night. Before writing for Gaming Trend, he had a small gig on the now defunct Examiner. When not being a third wheel with his best friends on dates or yearning for some closure on Pushing Daisies, he's busy catching up on shonen manga and wacky rhythm games. Mains R.O.B. in Smash. Still doesn't know if he's a kid or a squid.
Related Articles: Beyond the Page, Kaguya-Sama: Love is War Volume 1
Share
Tweet
Share
Submit