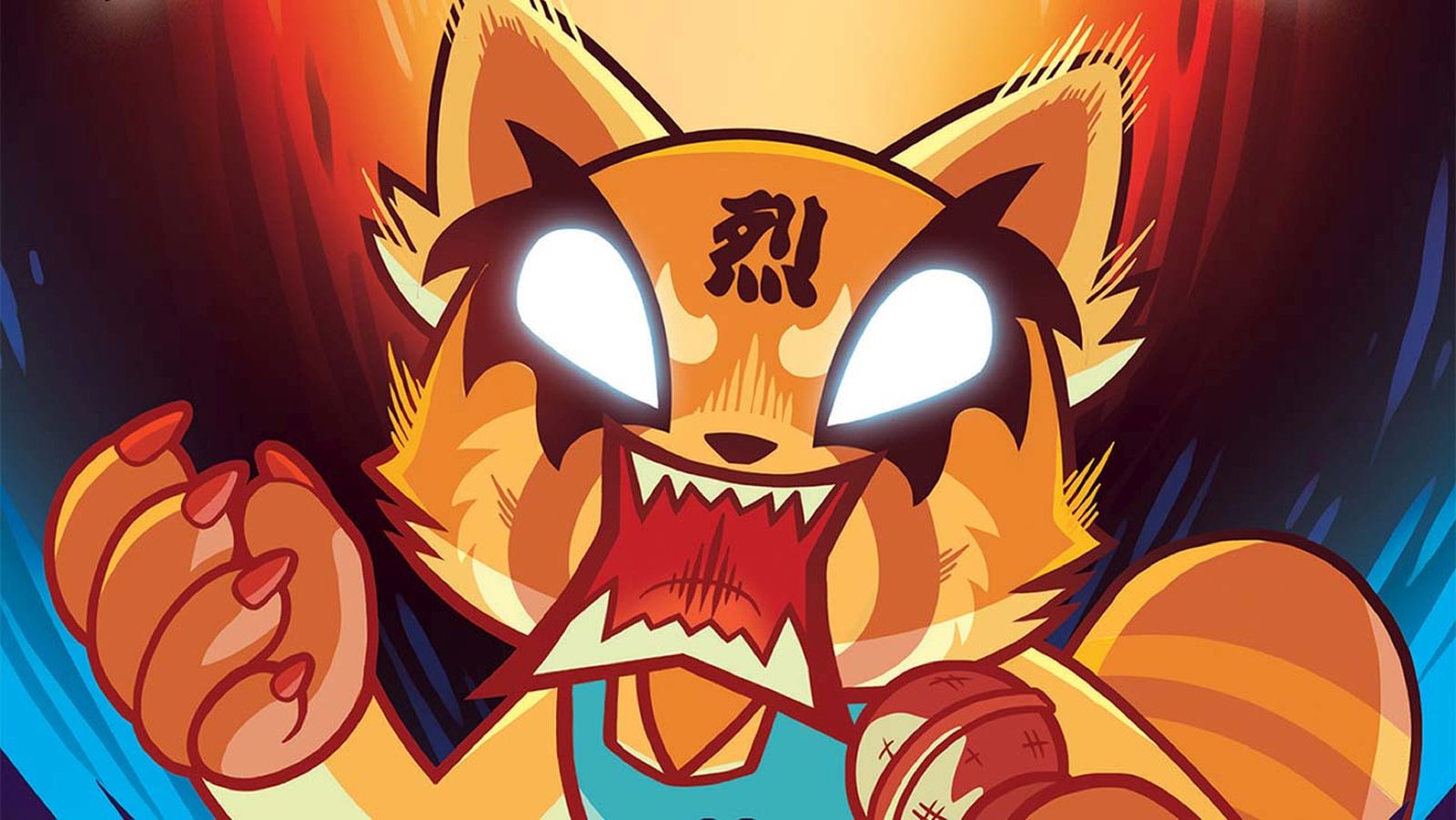 Season 4 of Aggretsuko is on the way, and I’m excited for it. Before we get to all that, though, let’s check out the Aggretsuko Work/Rage Balance card game. If you don’t know what Aggretsuko is, in 2016 Tokyo Broadcasting System Television aired 100 episodes of an animated fanworks short. In 2018 Netflix said, “Hold my mic” and brought the aggressive red panda (originally titled Aggressive Retsuko in Japan) to their streaming lineup. I fell in love and found my Spirit Animal. Let’s see if this simple card game can capture the essence of the show.

Retsuko is a young mild mannered office worker who has a literal and figurative pig for a boss. He’s demeaning, demanding, and condescending to her all of the time. To take out her frustrations, she goes to the local Karaoke studio and rages out to death metal. She doesn’t just listen to the aggressive music, though, she creates her own lyrics to suit her current situation. Now the Sanrio mascot has come to a card game, simulating her stressful work week.

As you can see in the video above, the game plays out like a combination of Liar’s Dice and Poker. Gameplay, once you get the hang of it, lasts for about 30 minutes for 3 to 6 players, with a very easy learning curve. The reference cards show the more complicated hand progressions for those unfamiliar with Poker rules. Each player has a hand of 13 cards to start, and your objective is to deplete your hand faster than everyone else. The game lasts five rounds (Monday through Friday), and whomever has the lowest score when the weekend arrives, wins.

There are a total of 86 cards in the deck, numbered 1 through 10 in four suits, two each. There are also three 11s, two 12s, and one 13 that act as spoilers in the deck to really upset the balance. 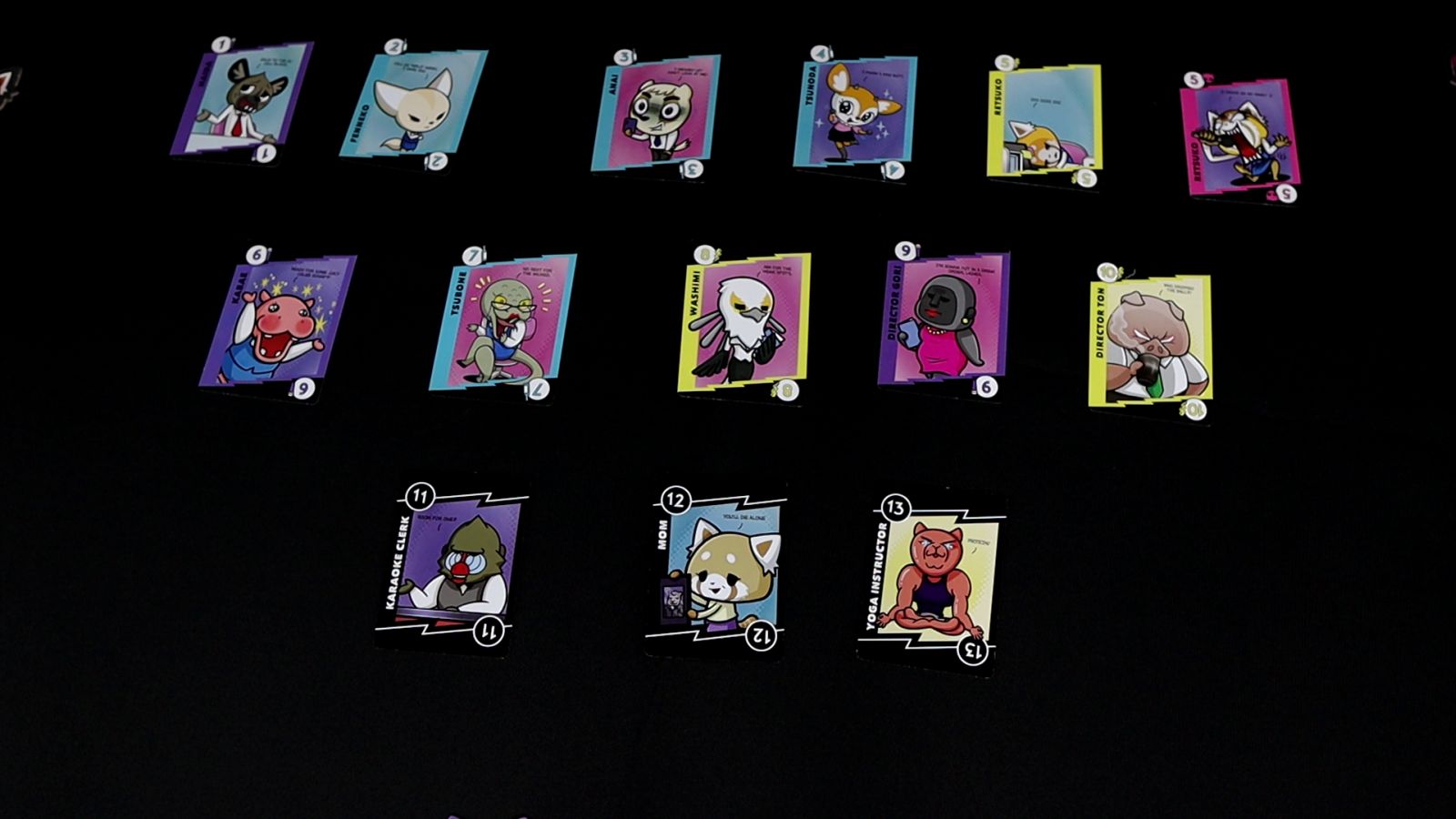 Gameplay starts with the person who had to stay late at work most recently. That person plays anything from a lone card all the way up to hands like a full house or straight, and the subsequent player then has to play the same number of cards, but a higher value. If they can’t, they pass and play continues until all but one person has passed. When the play round gets back to the leader, they set the pace once again, playing anything from a single card through the various hands listed on the reference card. This continues until all cards are gone, ending the day. Play then resets for the next leader in the rotation, continuing clockwise until all five days have passed. Turns out the song is right — everybody’s working for the weekend. 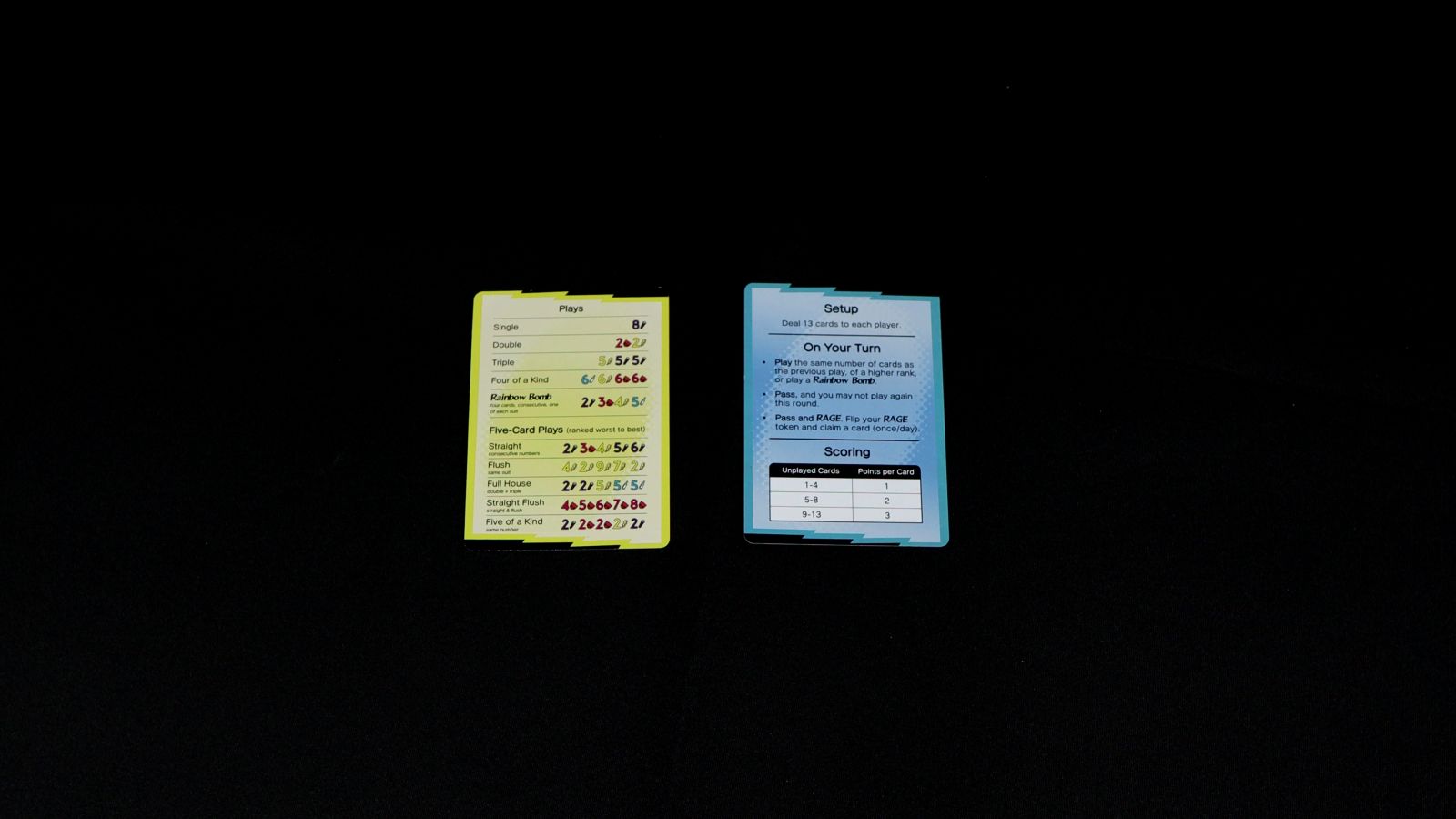 Once per round you can flip your player icon from passive to rage, placing it on top of a card that has been played. Maybe you are looking to complete some crazy high straight and need that 10 card and the other has been played? Well, the risk is that you can end up stuck with even more cards and a busted straight at the end of the day.

To spice things up, you can also play a Rainbow Bomb. A Rainbow Bomb is a straight with all four suits represented. The Rainbow Bomb can only be beaten with a higher straight Rainbow Bomb, making it an almost guaranteed win for that day, sticking everyone with the cards in their hand. The Rainbow Bomb adds a fun way to clip the lower hand progressions and get ahead of your “co-workers”, which is your ultimate goal. 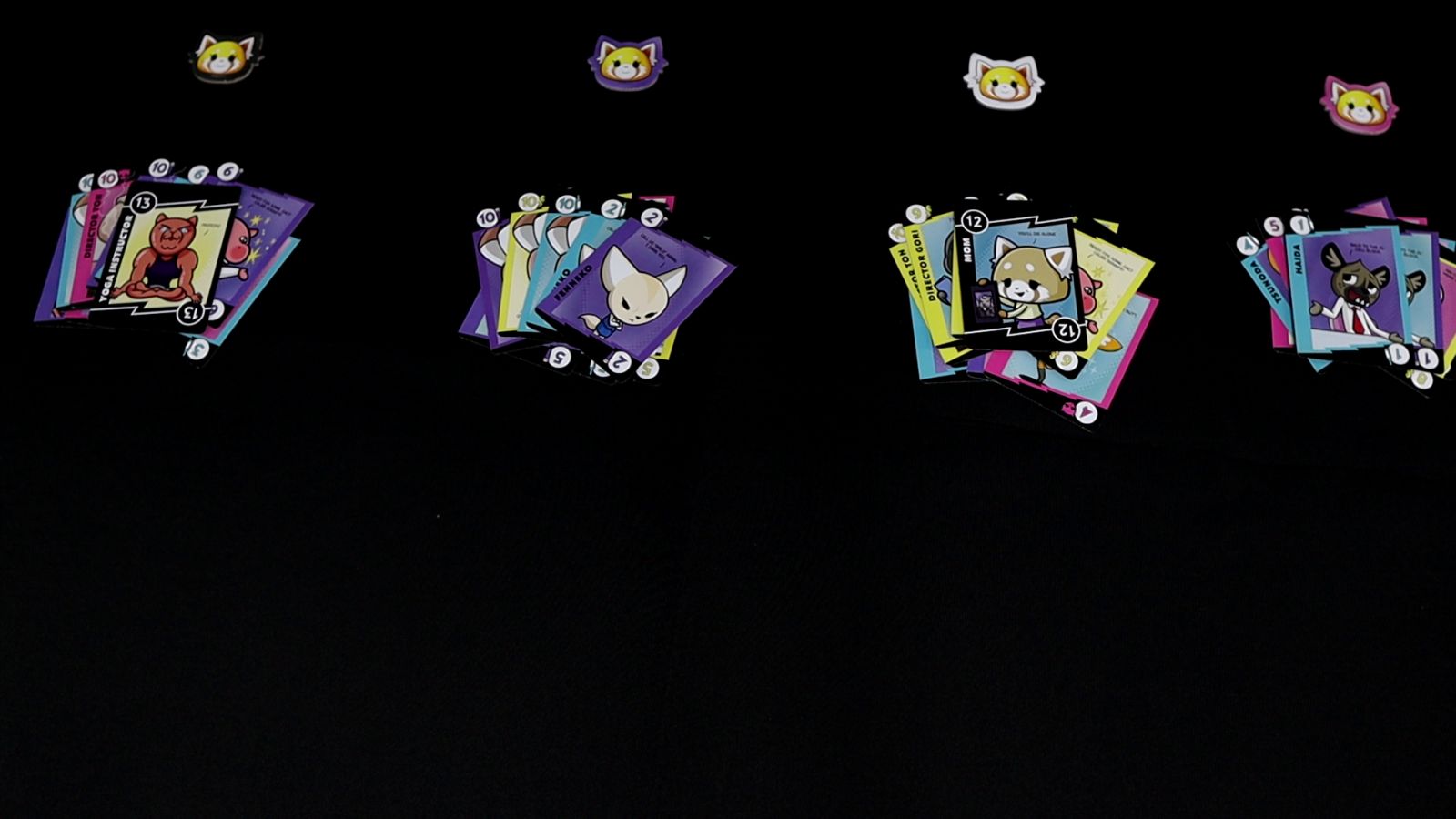 At the end of your five work days, it’s time to settle up to see who is the employee of the week. Using the scoring reference card, everyone tallies up their remaining hand, picking up between 1 and 3 points per card, declaring a winner.

I really only have two complaints with Aggrestusko Work/Rage Balance — the Rage mechanic, and color choices. The yellow on the cards can be hard on the eyes. While it does match the aesthetic of the show, maybe neon brightness isn’t the right hue. Similarly, raging out is a major thematic element of the show. It’s what makes Retsuko Aggretsuko. Having that mechanic potentially carry negative consequences means it gets used less often than you might imagine. It’s not game-breaking by any stretch, but perhaps the developers could have found something that added advantage rather than introducing risk. It’s a minor nitpick in the end. 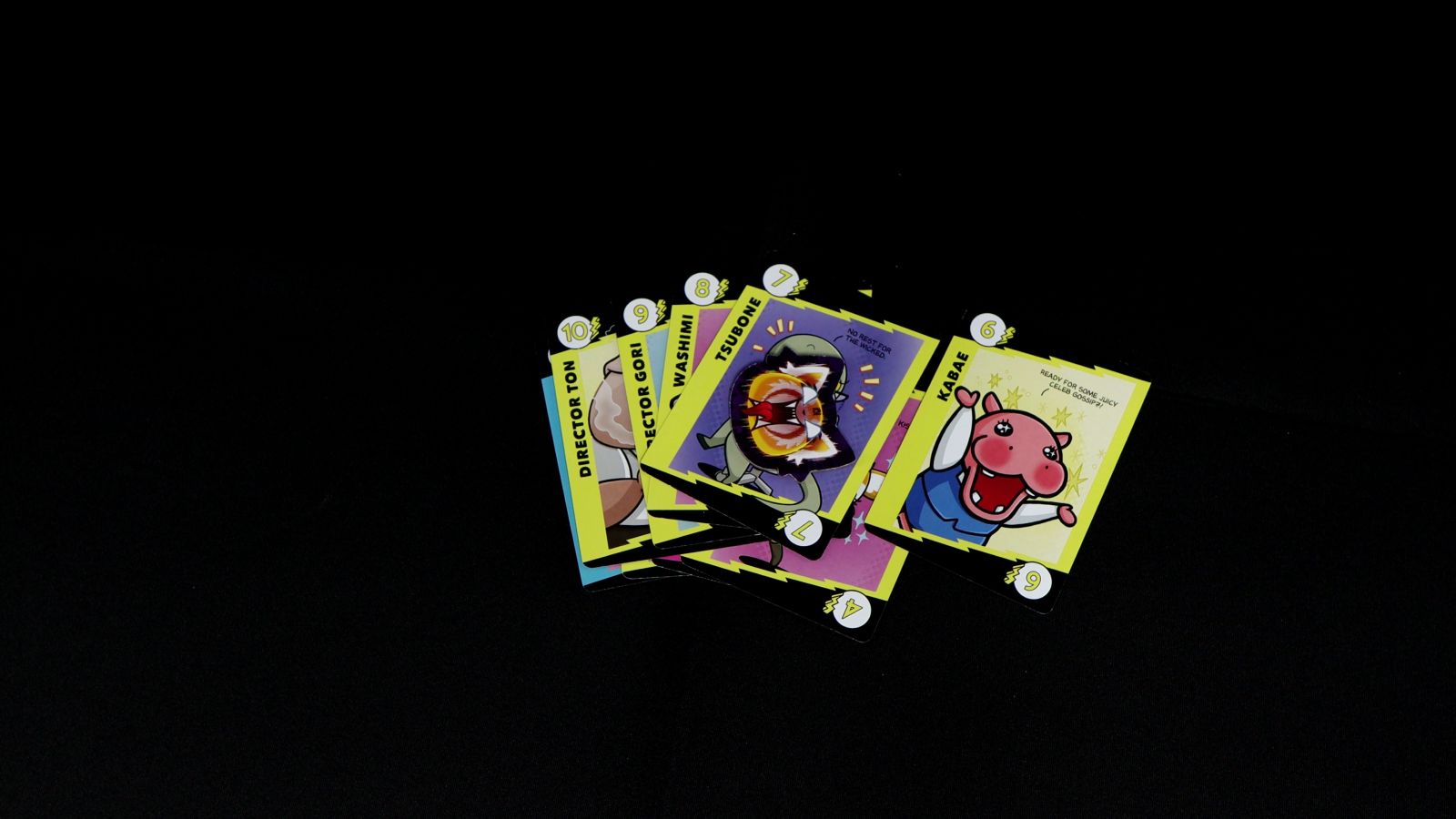 The box says the game can be played by anyone ages 10 and up, and that tracks. The gameplay is simple enough, so as long as your 10 year old can pick up some basic Poker hands, this could be a great addition to family game night.

With simple pickup and play mechanics, Aggretsuko Work/Rage Balance is a great addition to family board game night. It’s easy to recommend for fans of the show.

Ron Burke is the Editor in Chief for Gaming Trend. Currently living in Fort Worth, Texas, Ron is an old-school gamer who enjoys CRPGs, action/adventure, platformers, music games, and has recently gotten into tabletop gaming. Ron is also a fourth degree black belt, with a Master's rank in Matsumura Seito Shōrin-ryū, Moo Duk Kwan Tang Soo Do, Universal Tang Soo Do Alliance, and International Tang Soo Do Federation. He also holds ranks in several other styles in his search to be a well-rounded fighter. Ron has been married to Gaming Trend Editor, Laura Burke, for 21 years. They have three dogs - Pazuzu (Irish Terrier), Atë, and Calliope (both Australian Kelpie/Pit Bull mixes).
Related Articles: Aggrestuko Work/Rage Balance, Tabletop
Share
Tweet
Share
Submit