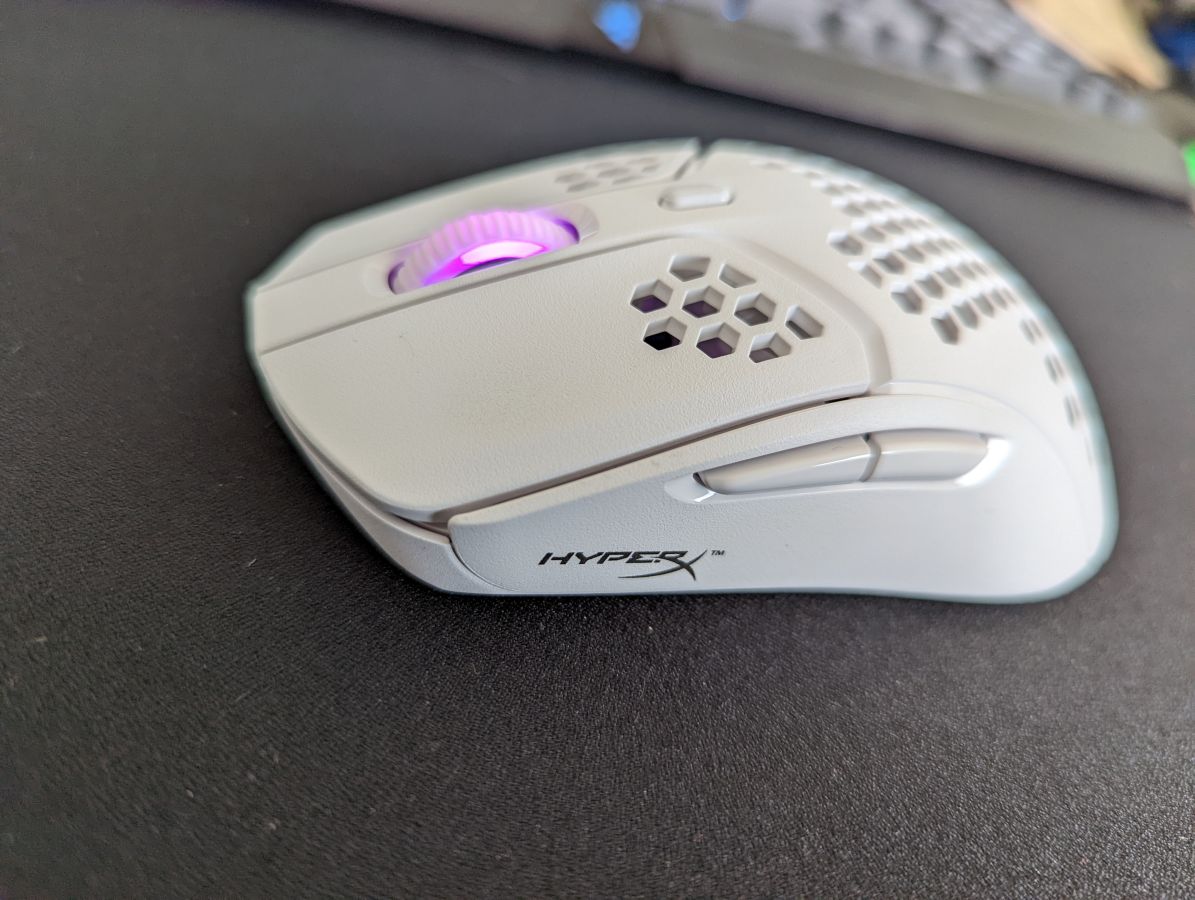 I don’t remember word for word what I said about the HyperX Pulsefire Haste gaming mouse in my review, but I do remember that it was excellent. That was the first piece of gear I’d ever reviewed, and I really enjoyed everything about it. Unfortunately, a soda can was opened in the vicinity of said mouse, and while it still works the spill had worked its way right under the right button, and with a gaming mouse if it don’t click right, it’s done. While I could have purchased another, I’ve been through several other gaming mice as they’ve dropped, doing reviews and breaking news on new products. They’re all really good, and some great, but I’ve never forgotten how fantastic that first one has been. Thankfully, a new version of the Pulsefire Haste has dropped, in wireless form no less, and after spending the last week with it I’m reminded why I loved the original so much.

As per usual, let’s jump into the box. Included with the mouse itself is the wireless dongle, a USB-C charge cable (thank goodness for USB-C), as well as a quick start guide. HyperX has also thrown in grip tape (a personal favorite of mine), and additional PTFE skates for the bottom of the mouse. The only thing I don’t care for with the grip tape is the color; the mouse I received is white, and the grip tape is black. I don’t mind two tones, but it makes the mouse look a bit cheap with the contrasting colors. 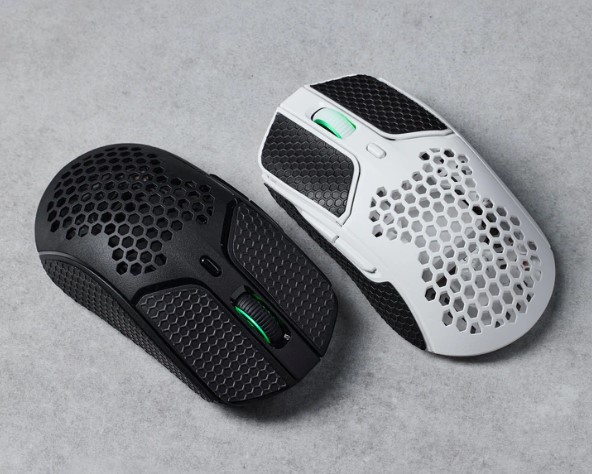 For the mouse itself, I’m again impressed with the compact nature of it. Taking this thing everywhere will be easy, with a slot in the bottom to hold your USB dongle. It is an open slot; no cover to keep the dongle protected, but it has a holder inside to make sure it doesn’t slip out. Beyond that, there’s not a lot else to bring up. You have your right and left buttons you’ll just about always have on a mouse, a scroll wheel, two side buttons pre-programed to go forward and back on webpages, and a DPI button. It might not sound like much, but it’s perfect for anyone that needs a solid gaming mouse.

Where the Pulsefire Haste Wireless really excels is how much lighter this thing is compared to anything else. A lot of companies advertise being lightweight, but the original Pulsefire Haste only weighed in at 59 grams. Somehow, going wireless only adds 3 grams, weighing in at 62g without the cable (interestingly the black is 61g). This mesh mouse material they’re developing or using along with the hex/honeycomb shell feels solid, and is light as a feather. I don’t know that I’ve handled a gaming mouse that feels this light, yet feels this good. The shell is shaped comfortably for long sessions, and it comes in a bit flatter than some of the others I’ve used recently. Maybe it’s just me, but it fits well in my hand (mine are smaller for reference), and I’ve not had any cramping or discomfort using it. The skates also glide around my mousepad, although with my previous Haste they did wear out somewhat quickly. Could be why they included another set.

Gripping and holding the Pulsefire Haste wireless is fine, but using it is even better. The clicking feels great, the response time is quick (advertised at 1ms via the 2.4GHz), and the scroll wheel feels good. The DPI also goes up to 16000, and while it’s a tad lower than say the Steelseries Aerox gaming mice, it’s still more than enough to please most PC gamers. I tend to stick between the 3-4k area, and it’s more than accurate when flicking around games or Chrome tabs. In terms of shooting, I can’t say I’m very good with a mouse and keyboard, but I did start my first Vanguard match 9-0. I’d probably blame any bad plays more on my inability to correctly use a keyboard than the mouse, because I was beaming. 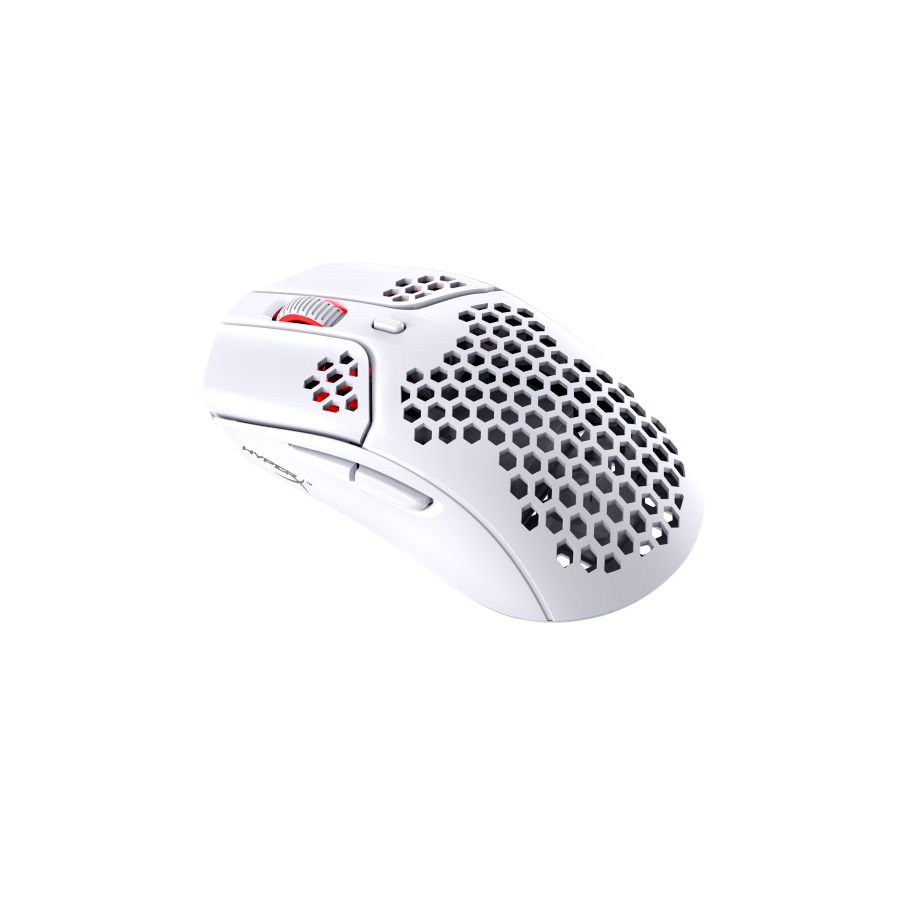 Another thing that has been “beaming” is the battery life on this thing. HyperX tells you that, in the best circumstances, you’ll be sitting at about 100+ hours of life on a single charge. While I don’t spend a lot of time using the crap out of a mouse, I’ve had this one for almost two weeks, and it has yet to die from my initial charge. Part of this is how well the mouse goes to sleep. This functionality saves a bunch of us, especially in the world of cellphones, and a lot of devices are following. The Pulsefire Haste does a fantastic job of utilizing your battery- turning on when you need it, and recognizing when you don’t. Battery life is important with wireless, and that’s obviously a priority for HyperX.

As much as I love this mouse, there are a few drawbacks. I’m disappointed in the versatility of this one, with no Bluetooth included. I’ve reviewed several hybrid gaming mice recently, and having the ability to move from device to device seamlessly skews your view when you use a device that doesn’t have it. It’s a missed opportunity, mainly because the Pulsefire Haste excels in so many ways. Besides that, the RGB and NGenuity software still have a ways to go. RGB lighting isn’t the end all be all for a gaming mouse, especially since your hand covers more of that than on a keyboard. The only lighting on this one is on the scroll wheel, which is nice because it can be seen, but there’s just not much. With the Ngenuity software, I’m still waiting to see more settings to be able to chase and more lighting styles and modes to use. It still feels barebones when it comes to adjusting your gaming mice, and if HyperX would put a little bit of effort into revamping the software I think it could be right up there with Steelseries’ GG app. At the moment though, it’s just not there, even if few are. There’s also the whole lefty thing; as of now there isn’t a model for those left-handed customers. Once again, I know there aren’t as many as righties, but it sucks to see them passed over. 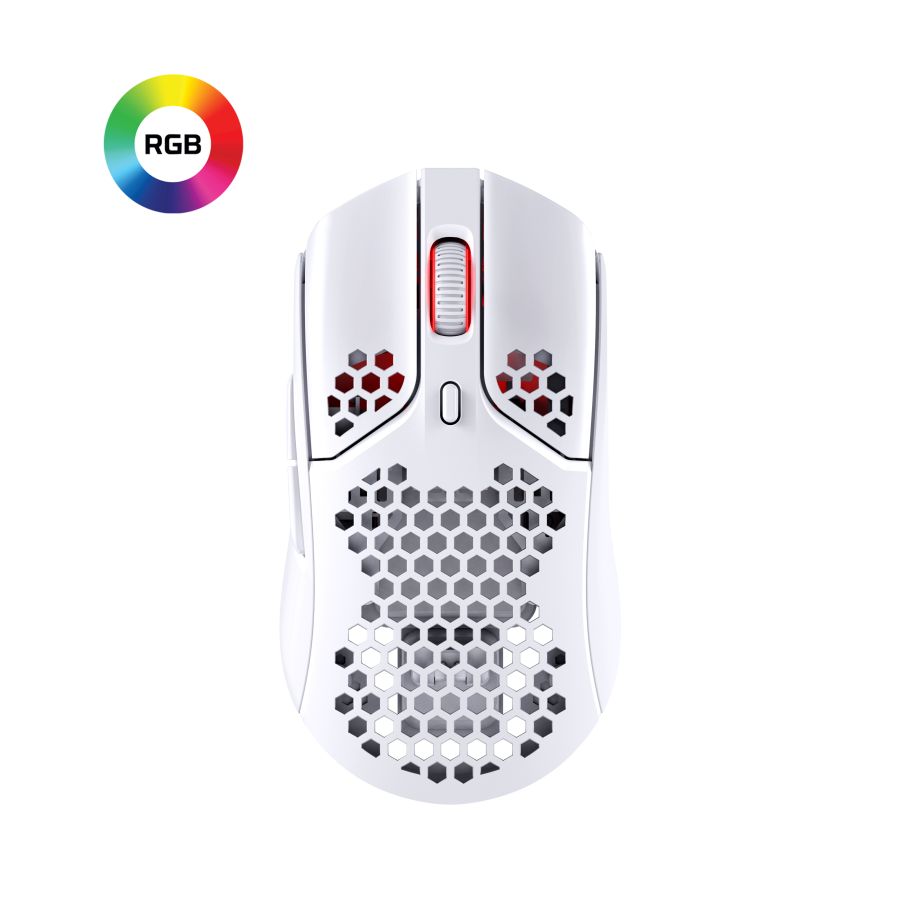 All that being said, one factor somewhat knocks away the drawbacks: the price. At only $79.99, this thing is HALF the cost of many other gaming mice, and it’s easily the best budget one you can grab. I, like many, don’t have infinite monnies to drop when new accessories come out, and most of us want to put more into the actual computer hardware or monitors, so we end up pulling from the mouse budget. The HyperX Pulsefire Haste Wireless’ price is fit for what it brings to the table, especially in a world where you see your Benjamin giving you less and less value.

Since you are saving that money, let’s talk really quick about the Pulsefire mat, the official mouse pad for the mouse. Funny enough, I’ve used this one at my desk more for my keyboard, with it fitting perfectly at the top. This large mat is comfy, and can definitely handle your Pulsefire Haste mouse, but even more so it’s nice to rest your elbow on. It doesn’t move in the slightest, with some nice anti-slip rubber underneath, and it’s easy to roll up to take with you. Given the mouse is so easy to throw in a bag, it makes sense the mouse pad would be.

It’s the mouse we all know and love, but wireless. Sure, I’d like some Bluetooth included, and the RGB and software could be improved, but the comfortability and feel can’t be beat. This is one of the lightest mice you can grab, and moves around the pad as fast as lightning. The Pulsefire Haste was stellar, and the Pulsefire Haste Wireless is a worthy follow-up.

David Burdette is a gamer/writer/content creator from TN and Lead Editor for Gaming Trend. He loves Playstation, Star Wars, Marvel, and many other fandoms. He also plays way too much Call Of Duty. You can chat with him on Twitter @SplitEnd89.
Related Articles: HyperX Pulsefire Haste Wireless
Share
Tweet
Share
Submit