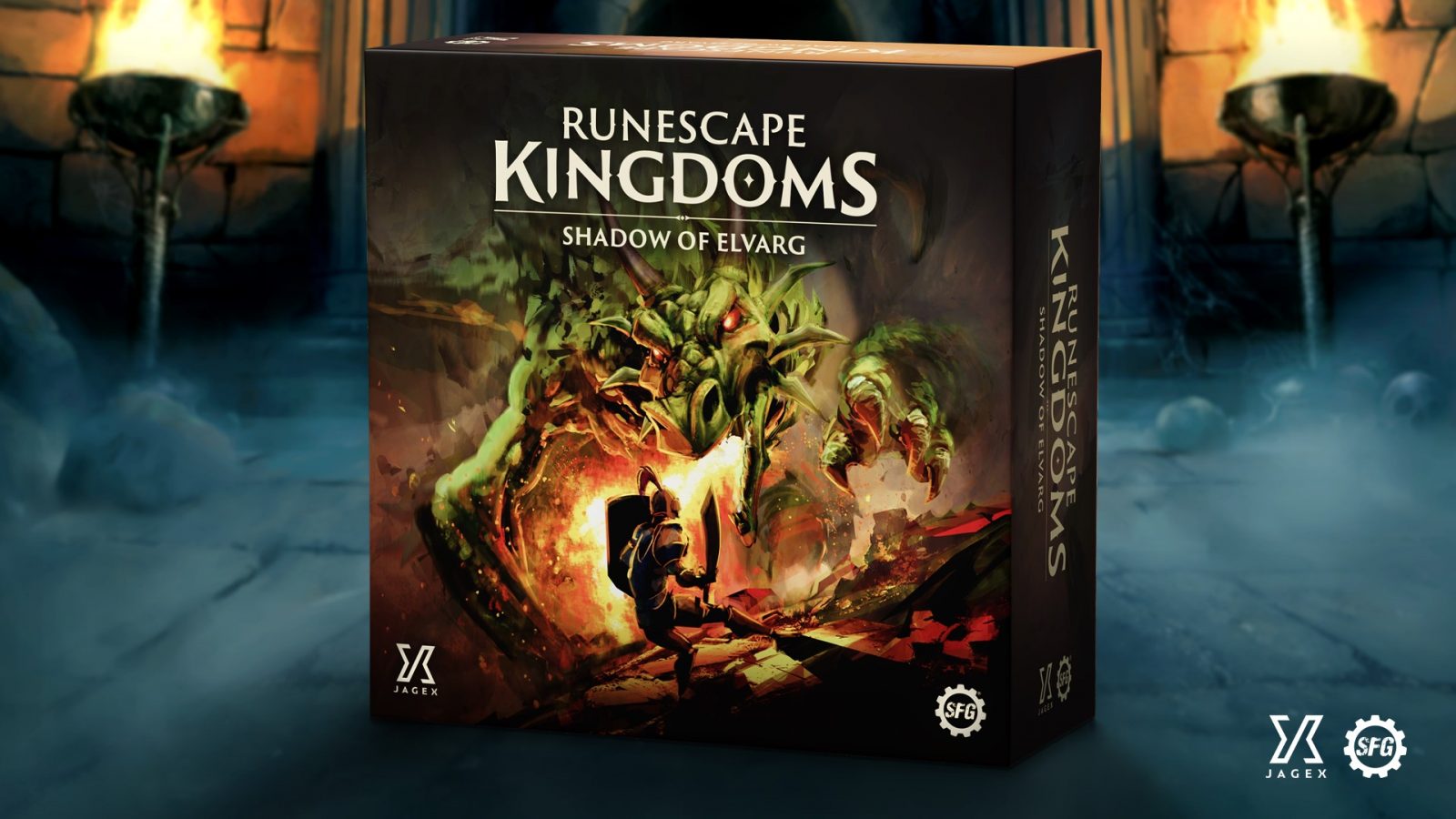 The box art for RuneScape Kingdoms: Shadow of Elvarg has been revealed along with the announcement that the game’s Kickstarter will go live on May 31st, 2022. You can check out the box art and read more below:

Wednesday 27th April 13:00 UTC / 14:00 BST – Manchester, UK – Publisher Steamforged Games can now reveal the RuneScape Kingdoms: Shadow of Elvarg board game, inspired by one of the most popular and longest-running online role playing video game franchises in the world, will launch its Kickstarter campaign on May 31st 2022.

Designed and developed by Steamforged in partnership with the creator of the iconic RuneScape franchise and leading British video game publisher, Jagex, RuneScape Kingdoms: Shadow of Elvarg is a cooperative campaign board game for one to five players set in RuneScape’s “sometimes epic, often irreverent” fantasy world of Gielinor.

Players can explore the kingdoms of Asgarnia and Misthalin from above with a game board styled like a fast-travel map, jumping from region to region as they level up skills and complete quests, and zooming in for face-to-face encounters with iconic bosses that become even tougher the further they progress. Just like the RuneScape and Old School RuneScape video games, player agency is key, with players able to decide what skills to max, what weapons to craft, and where to explore next.

Also revealed for the first time today, the game box features custom artwork depicting the eponymous green dragon and “main boss” of the board game, Elvarg, locked in a fiery battle with a brave knight.

Set to run for ten days, the RuneScape Kingdoms: Shadow of Elvarg Kickstarter will mark Steamforged’s tenth time bringing a board game to Kickstarter, and fourteenth time adapting a video game for the tabletop. Other Steamforged Kickstarter campaigns include Monster Hunter World: The Board Game, which grossed £3.4 million on Kickstarter and gained more than 20,000 backers in 2021, and Bardsung: Legend of the Ancient Forge, which first funded on Kickstarter in late 2020 and recently topped Polygon’s list of the best new board games to buy after releasing to retail in April this year.

To be notified when the RuneScape Kingdoms: Shadow of Elvarg campaign launches, follow the Kickstarter here.

To get involved and receive the latest updates on the upcoming RuneScape board and tabletop roleplaying games, join the dedicated mailing list here.