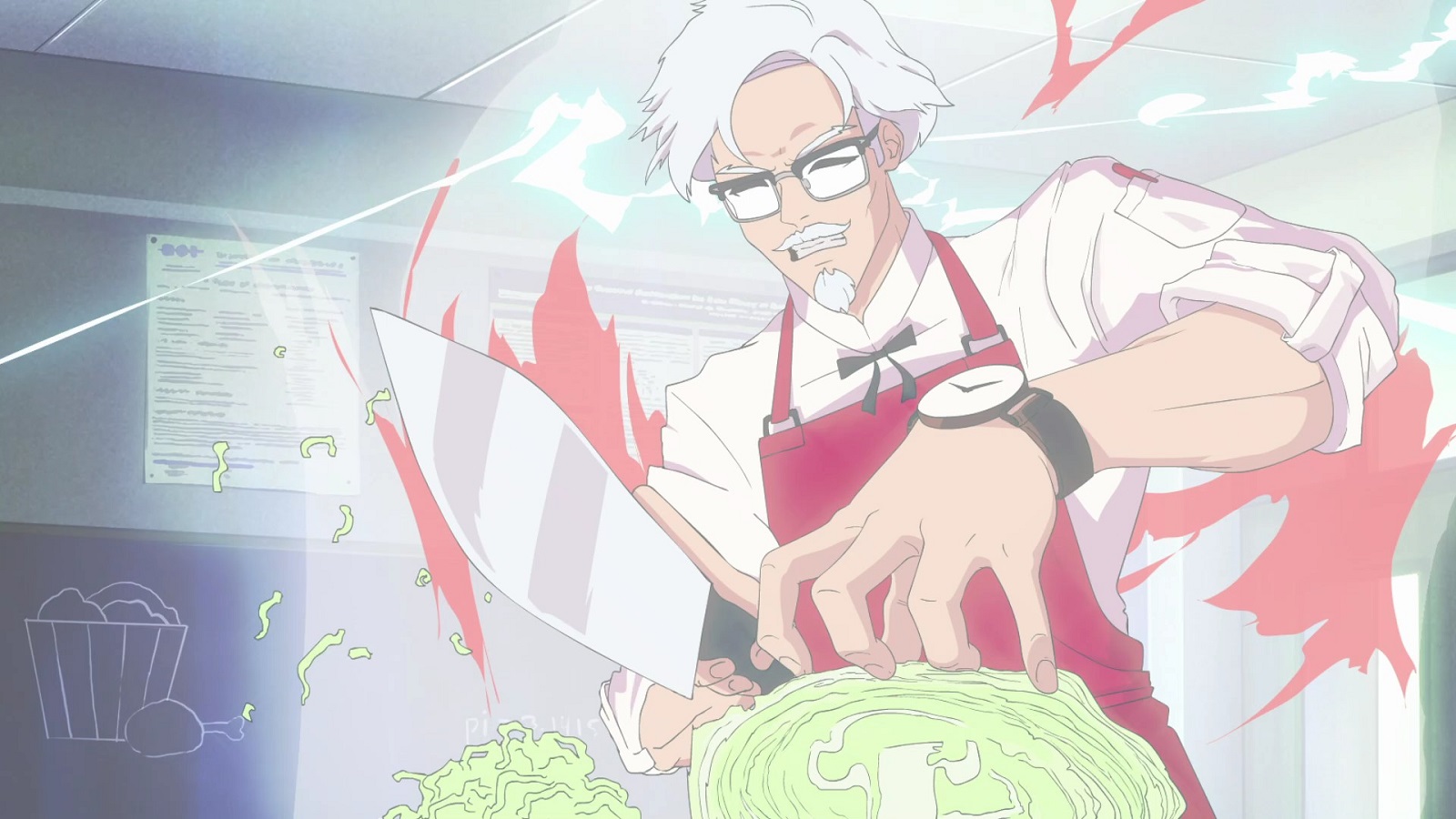 Look, advergames have been around for decades, and we’re not getting rid of them. From Chex Quest to the (un)holy Burger King trilogy of Xbox games, we just can’t get enough of our artery-clogging advertisements. KFC recently shocked the world with I Love You Colonel Sanders! A Finger Lickin’ Good Dating Simulator, and while it’s a passable western visual novel, there’s nothing here that separates it from the competition (y’know, other than the weirdness factor of it all). 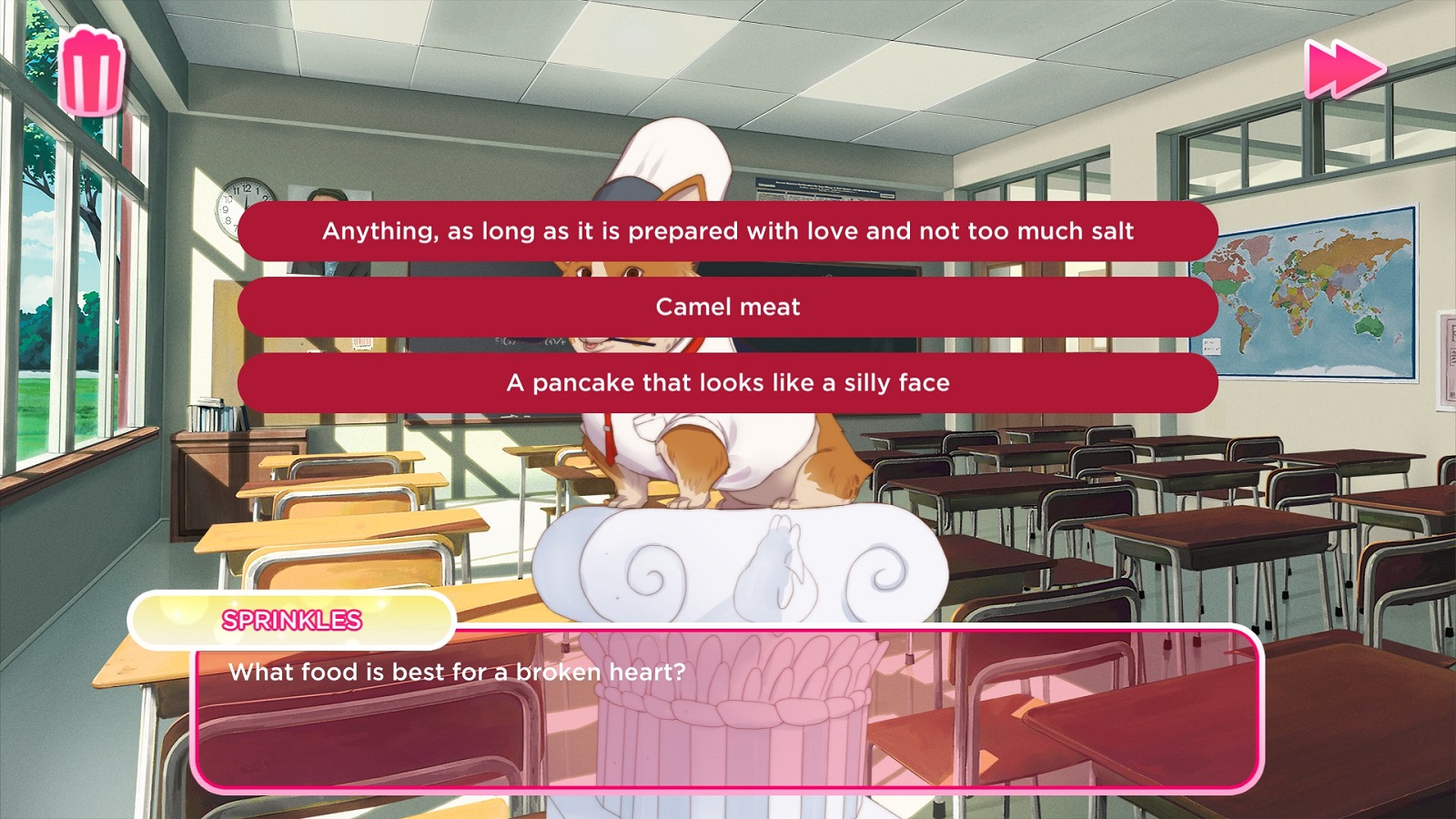 I Love You Colonel Sanders! has you assume the role of a budding chef at a culinary school, with your friend Miriam applying with you. The school has strict three-day semesters (perhaps a nod to the absurd three-day trial limit of the Ace Attorney games?) where you must prove your mettle by facing off in a cooking trial. It’s here you also get to meet the supporting cast, like your busty rival Ashleigh, minion sidekick Van Van, and last but definitely not least, Colonel Sanders himself. The way the developers designed him is pretty amazing, and I definitely wouldn’t mind seeing promotional manga or even an anime of this bishonen mascot.

Anyways, the game follows you across a few chapters as you live life in a culinary school, learning a bit about food preparation, and finally trying to date Colonel Sanders. While most of the game is straightforward, there are decision trees and different outcomes that you can experience should you play well enough. That being said, there’s more than enough ways to roll a game over screen, though they’re easy enough to retry. It’s standard visual novel fare that surprisingly might work for those trying to get into the genre. 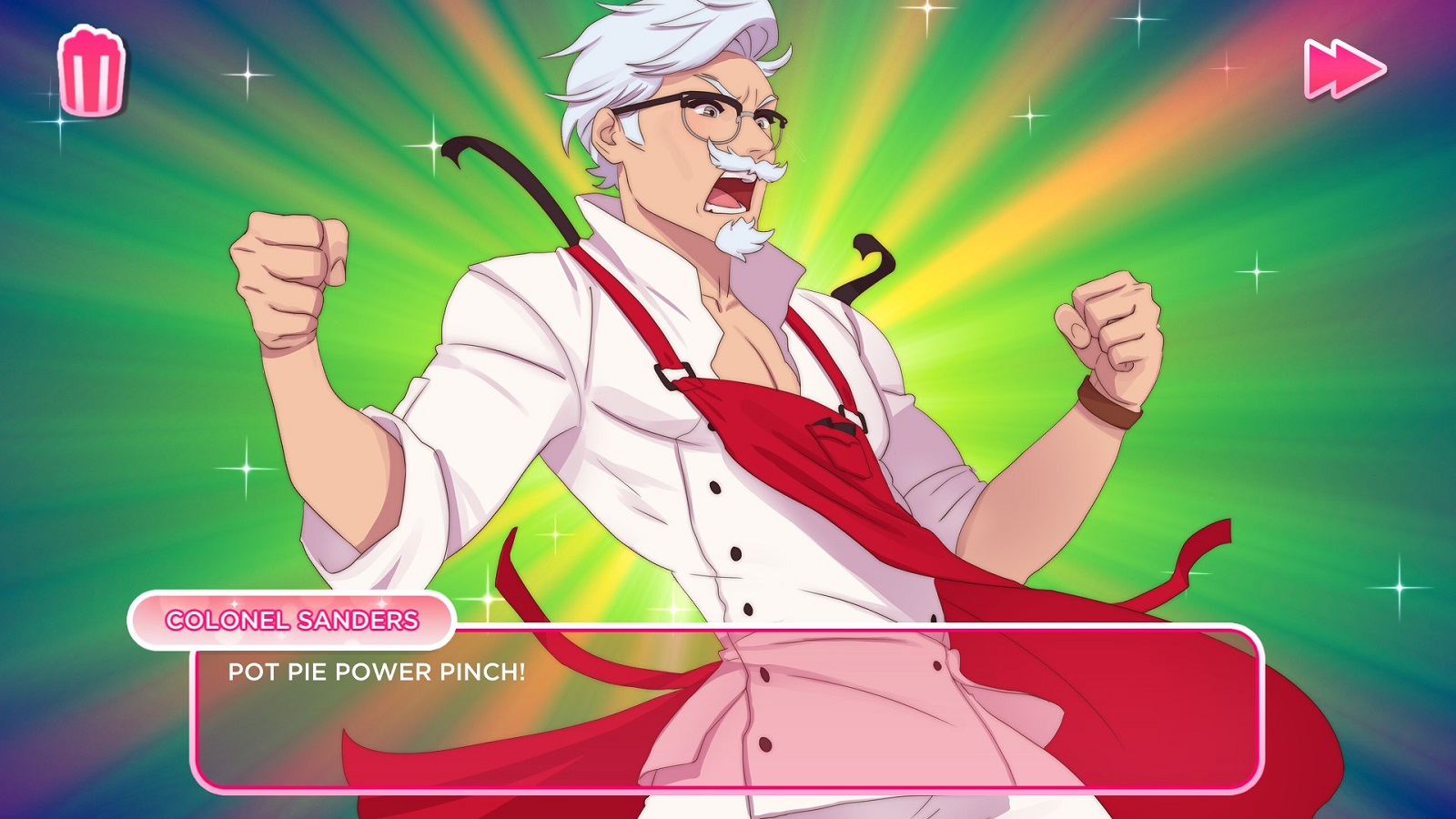 Unfortunately, this whole story feels more like a shallow parody than a meaningful one. I did actually enjoy the personification of a beloved mascot, and how his history and poultry products were represented; it’s everyone else that feels one-dimensional. You’ve got Ashleigh, the villain who resorts to black magic to win (to be fair, you can also choose to do this), Van Van, a JoJo ripoff, and Pop, who’s a whiny little baby that has a less than savory obsession with Miriam. The supporting cast just feels off, and I really didn’t enjoy the “haha, memes!” references they would pepper in every so often. 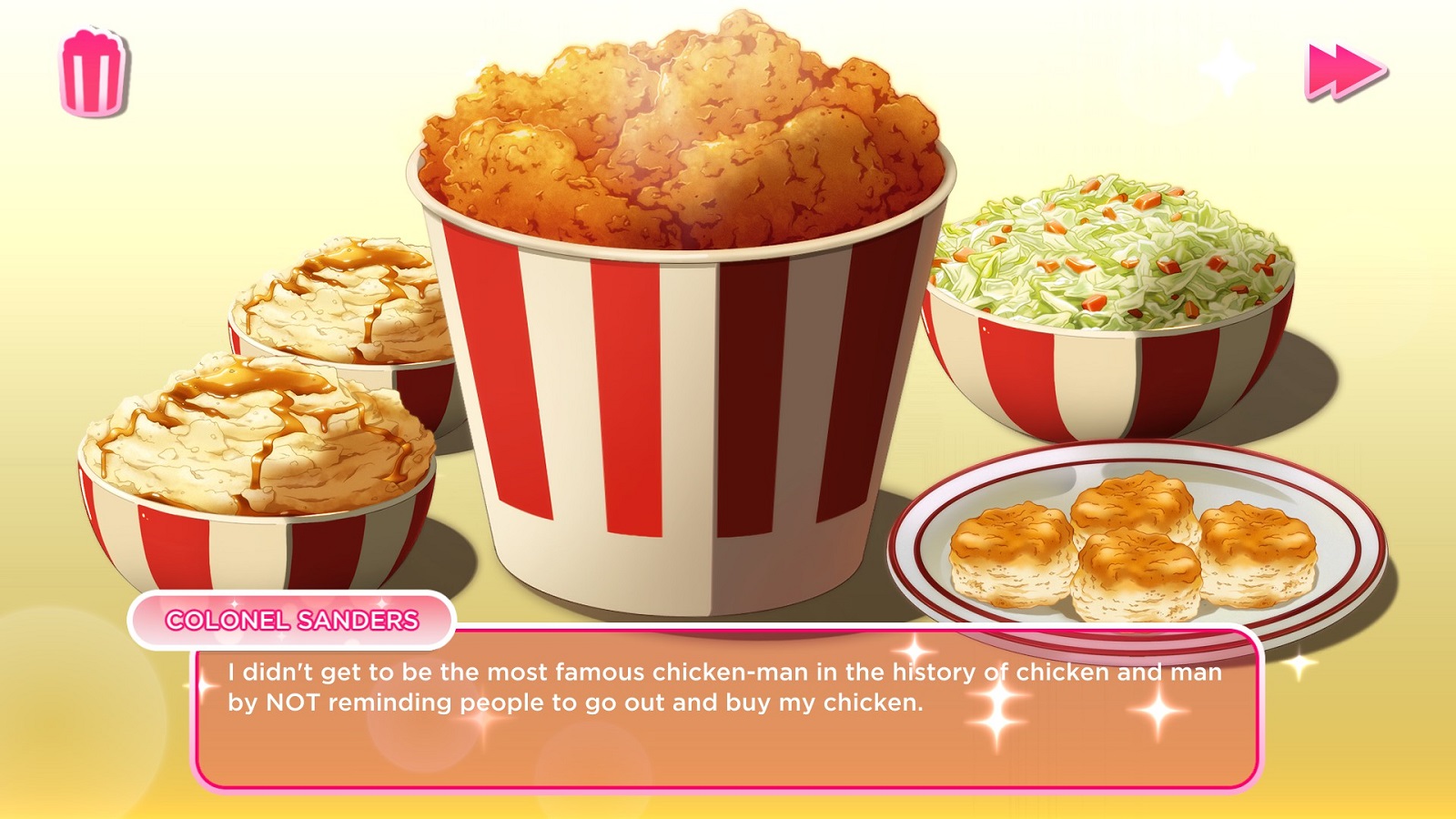 I mean, at least he’s honest.

There are still a host of issues that bring the game from a tasty feast to a nibbling appetizer. First off, I couldn’t use my gamepad and was stuck using mouse and keyboard controls. I also couldn’t save whenever I wanted to, with the system rather opting for chapter navigation rather than save-where-you-want checkpoints. The art style is amazing for a free title, with the anime-looking graphics being a treat for sore eyes; this is one aspect of the game that I adored wholeheartedly. On the other hand, I was surprised that this game required a little bit more beef… erm chicken for processing power (normally visual novels can run on most laptops, but this one stuttered when using normal graphic settings). The music was rather forgettable too, with nothing really sticking out. 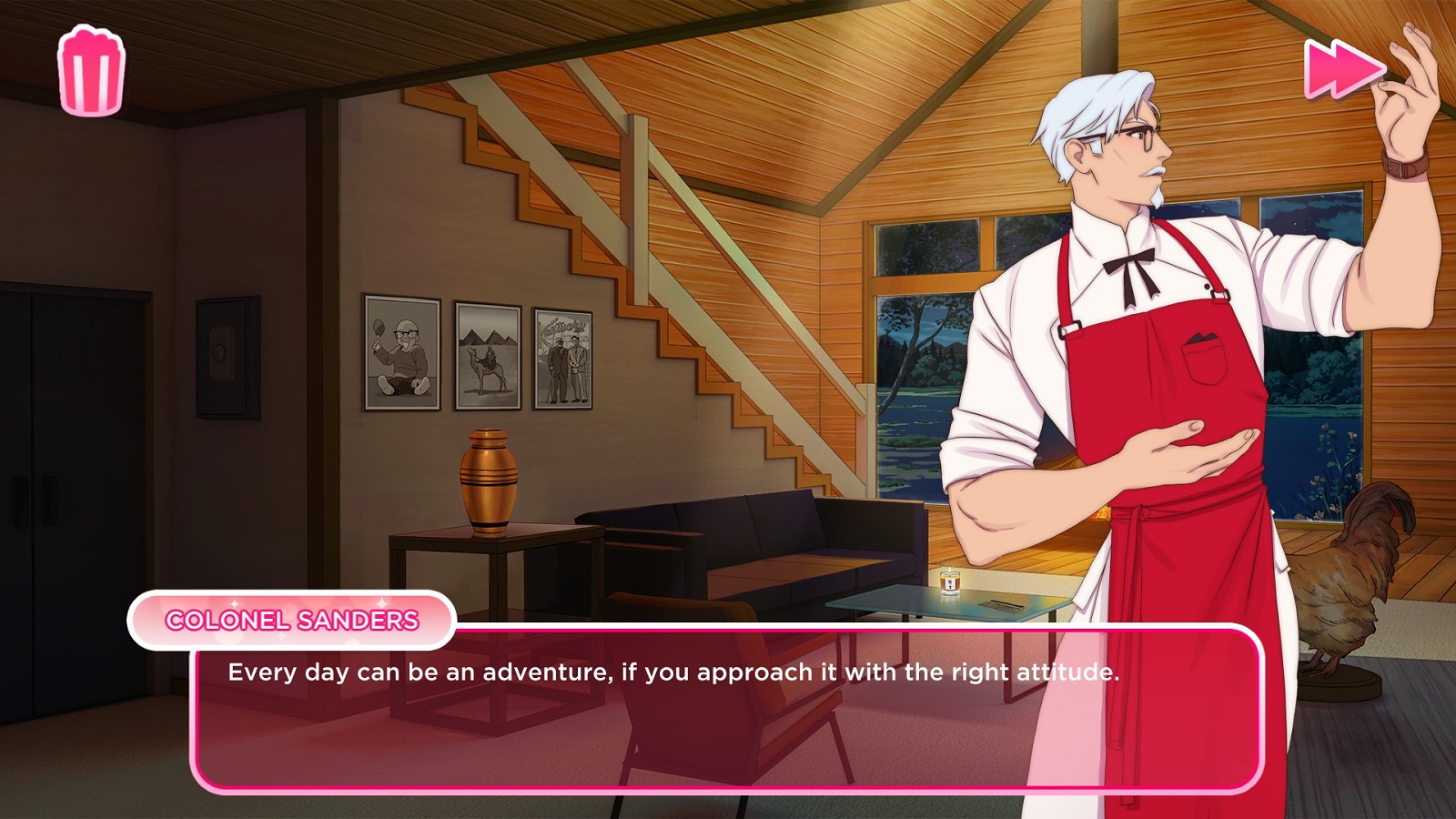 The story wraps up in less than an hour, with multiple endings possible if you decide to try and pursue the Colonel. They’re not much, but at the very least do encourage a little bit of replay value. All in all, this is a free game that is inoffensive, doesn’t really do much for visual novel veterans, but is still worth a shot if you have an hour to kill.

I Love You Colonel Sanders! A Finger Lickin’ Good Dating Simulator is fun for a free laugh, but will bore visual novel veterans with its one-note supporting cast. Stay for the art style, but feel free to grab your chicken to go if you’re in a hurry for something else.

Elisha Deogracias is an aspiring accountant by day, freelance writer by night. Before writing for Gaming Trend, he had a small gig on the now defunct Examiner. When not being a third wheel with his best friends on dates or yearning for some closure on Pushing Daisies, he's busy catching up on shonen manga and wacky rhythm games. Mains R.O.B. in Smash. Still doesn't know if he's a kid or a squid.
Related Articles: I Love You Colonel Sanders! A Finger Lickin' Good Dating Simulator, Indies
Share
Tweet
Share
Submit