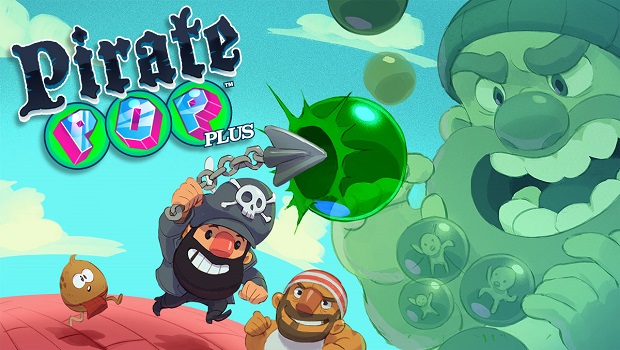 Looking back at the arcade games I played as a kid, I’d have to put Dance Dance Revolution and Magical Truck Adventure as my all-time favorites. (Look that second one up if you don’t know it; it’s great.) However, I do remember playing a little game called Buster Bros (or Pang outside North America), which was an addictive action-puzzler that had you popping bubbles with a variety of hooks. Hoping to revitalize that same gameplay system, Dadako and 13 AM Games have collaborated to create Pirate Pop Plus for the Wii U, a loving homage to the Pang franchise. Does this title have what it takes to become another nostalgic classic?

Pirate Pop Plus drops you in the middle of a never ending conflict with the dastardly bubble pirate; Pete Jr. has to foil the villain’s plan to entrap villagers into bubbles by using a trusty hook to destroy the oncoming onslaught of bubbles. The plot is wrapped up nicely in a couple of sentences, and after a few screens you jump right into the action.

You play the game on a square playing field, where every so often the bubble pirate will drop one bubble as it plummets towards you. After hitting a bubble with your hook (a simple button press away), it’ll split into two or more smaller ones as you continue to shrink them before eliminating them completely. The main gimmick that separates Pirate Pop Plus from Pang is the random shifts in gravity.

From time to time, the plane where you’re standing will change, causing you to fall around the square; you can pop bubbles by stomping on them while you’re in midair, causing a massive chain of points. Get hit four times (for most characters), and it’s game over.
Throughout your playthrough, you’ll get power-ups such as a machine gun or shield that will help you during your quest. You can also grab coins from hitting the bubble pirate when he appears or through chests and bonuses which can be used to purchase unlockables in the in-game store. Additionally, there are two difficulties of play: normal, which is the default playing speed, and hyper, which is harder and more frantic and has you enduring only two hits before you are finished.

From the get-go, Pirate Pop Plus exudes a retro 8-bit pixel art style; harkening back to Game Boy visuals, you can unlock different color schemes, but they’re the same 4-color pixelated palette reminiscent of the classic handheld. The soundtrack is pretty great in contributing to the arcade-like feel, with a few chiptune tracks peppered within. I did enjoy the track created by Runbow composer Dan Rodrigues, and the hyper mode track is a highlight too. Additionally, purchasing the game on either the New 3DS or Wii U will allow you to download the other version for free, which is a nice value for a small game.

However, this is where the title goes downhill. While the base game is undeniably addictive and fast-paced like an arcade game, it’s also as short as one. This normally isn’t a bad thing per se, but with only one mode and no modern concessions (no multiplayer, local leaderboards only), the game gets stale after less than an hour. The fact that, unlike Pang, there isn’t any physical variety to the playfield (even the backgrounds are similar!) means that the only challenge you’re going to be facing will be the increasing torrent of bubbles you have to pop. While the bubbles themselves can be tricky to destroy at times, I would have liked to see things like unbreakable platforms or some other level differences. The aforementioned lack of multiplayer is very noticeable here, since adding someone for co-op or competition would have been a great way to extend length; even the original 1989 Pang release had a two-player mode!

The extremely limited nature of the game without any staying power really causes it to flounder. Even the unlockables are a bit disappointing. While new characters and music are pretty neat, they can be unlocked in a matter of a few games, with only aesthetic graphics (like sticker decals you can place on the borders or button colors) comprising the majority of unlockables. While I understand the need for the game to be presented as squarely as possible, the borders are pointless and detract from the retro presentation of the game. Other than unlockables, achievements are present here, but since they don’t really do anything special, they’re more cosmetic than anything else.

While addictive in short bursts, Pirate Pop Plus doesn’t have the staying power to compete with the new retro classics in the market today.

Elisha Deogracias is an aspiring accountant by day, freelance writer by night. Before writing for Gaming Trend, he had a small gig on the now defunct Examiner. When not being a third wheel with his best friends on dates or yearning for some closure on Pushing Daisies, he's busy catching up on shonen manga and wacky rhythm games. Mains R.O.B. in Smash. Still doesn't know if he's a kid or a squid.
Related Articles: Pirate Pop Plus
Share
Tweet
Share
Submit