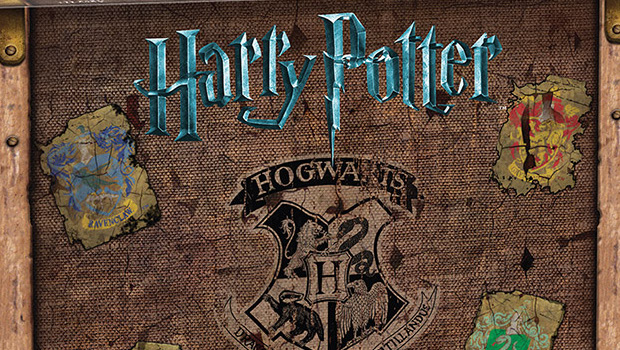 Think for a moment of the five fantasy/science fiction movie franchises that have dominated the first years of the 21st century: Marvel, Star Wars, Star Trek, Lord of the Rings, and Harry Potter. Now, think of a great board game that’s set in those universes. Marvel has Legendary, Star Wars has X-Wing and Imperial Assault, Star Trek has Attack Wing and Ascendency, Lord of the Rings has War of the Ring and the LOTR Card Game, and Harry Potter has…well, what does it have? As successful as the Harry Potter book and movie franchises have been, it hasn’t rolled over to the gaming front. There have been a few barely passable efforts, but Harry Potter fans haven’t had a great game that immerses them in the Hogwart’s universe as other franchises have had. USAopoly may have changed that with its recent release of Harry Potter Hogwarts Battle, a cooperative deck building game.

Deck builders tend to start you off with a small deck of basic cards. The goal is to improve your deck by purchasing better cards that enhance your power, which you can then use to defeat an enemy. Hogwarts Battle follows this premise; choosing from Harry, Ron, Hermione, or Neville, you begin with meager offerings. Most basic cards allow you to gain and spend influence. Influence is used to recruit more powerful spells, items, or even allies.  These cards can contain greater influence though they could also allow you to heal or attack. Every turn, you play your entire hand of cards to perform any action with points you accumulate. If you’ve played any deck builder before, the premise will be familiar. No fear if you are new to the genre though, as my dedicated crew of playtesters, my daughter and my niece, had little trouble picking up the mechanic. There’s nothing new here, but that’s not a bad thing. The game is accessible enough to be a great introduction to deck building.

Just as in the Hogwarts world, our heroes’ goal is to protect the school and prevent Voldemort and his cronies from taking it over. To do this, you and your partners must defeat every villain which are drawn one at a time from the villain deck. However, as the villains attempt to take control they attack and spread control markers over various locations. Should the enemy take control of all the locations, the heroes lose. The term cooperative truly fits as you will win or lose as a team. There is no overall winner, which is nice in that it means decisions need to be made based on altruism and not your own selfish motives.

Villains begin each turn and run automatically. Dark art events determine if players lose health, discard cards, or the enemy expands its control over a location. Newly appeared villains then use their special powers which can yield more damage. Should you withstand the barrage, you play your cards to retaliate. Cards are played and then discarded to a pile along with any cards you purchased that turn. Should you run out of cards, you simply reshuffle and draw a new hand of five cards, allowing you to access your newer, more powerful cards. Play moves to the next person and everything happens again.

This tried and true mechanic is then used throughout the game’s seven levels, loosely following the seven Harry Potter movies. The initial rules show you how to play through game box one. The villains are weak so you won’t break a sweat as you learn how to play. From there, you can dive into any of the other game boxes. Each game box has its own rule set and is combined with all previous games. The general principle of villain actions and card play exists, but some subtle changes happen. Some boxes simply add fiercer villains and more cards you can recruit. By game box four, dice come into play that give bonuses to every player or can be used by Voldemort’s gang to attack you. Voldemort makes his first appearance in game box five. By the final game box, you are facing every villain from each box as well as finding and destroying six horcruxes: special items that contain fragments of Voldemort’s soul. The scaling of this game doesn’t just come from throwing more and more villains at you. Just as they did in the movies, your heroes grow as you progress through the boxes. Initially, your hero’s power lies solely in their starting deck. In game box three, heroes can a new character card which grants an ongoing bonus. By the last box, the heroes have grown up and are their now in their most powerful form. Voldemort also gains power, becoming twice as strong in the final game as he was when he first appeared.

There is one mechanism absent from the game that may puzzle deck building players. Most deck builders allow a way to burn your weaker cards, removing them from your deck completely so your deck can contain only your stronger cards. This feature is absent from Hogwarts Battle. At first it seemed like a flaw that would really affect game play when the villains got harder. Thankfully, there are plenty of cards that allow you to draw to cycle through your deck faster. Also, those weak cards can actually protect you, as some villains target the pricier cards and make you discard them.

Hogwarts Battle almost has a legacy feel to it. Heroes improve as your progress, and while their starting decks never change, the cards available for influence grow stronger. Villains become harder and the game becomes more challenging as dark art events become less forgiving of mistakes. There’s a great sense of passing through the Hogwarts world as you try to win the penultimate battle against Voldemort at the end. While the results of one game don’t carry to the next, they act as the perfect gauge on whether you are up for the next challenge or not.

Granted, the challenge may take some time to build up. Playing game one by itself really only makes sense to run through the rules. Even using the first three game boxes is fairly easy. My novices began to struggle once we included game box four, but I suspect a veteran would have little to worry about until the last few boxes are in the mix. Still, the replayability of this game is almost endless. Not only do you have the four heroes and seven game boxes to choose from, but the game suggests different difficulties by starting off with part of the first location already under villain control. Once you understand the strengths of each game box, you could customize the game to your own liking. The game is versatile enough for you to find your sweet spot between challenging and fun.

Harry Potter fans will love the card graphics, which are stills from the movie series. For the most part, characters and items are introduced in the same sequence as they were in the movies, though some do pop up out of turn, most likely for game balancing purposes. The game certainly gets darker as you get deeper into it. The bumbling Crabbe & Goyle teaming up with the cowardly Draco Malfoy are laughable foes early on, but Deatheaters and Voldemort give the game a more sinister tone later. I would imagine that designer Andrew Wolf studied Harry Potter thoroughly as the theme and the game’s progressive style of play fit hand in hand. (At least, thankfully, the last game box isn’t split into two parts.)

The cards themselves may be the game’s glaring weakness. Deck building means lots of shuffling and reshuffling. Some cards can take this relentless abuse better than others. A single night of game play had me scurrying to sleeve this game. Sure, that’s a sign of some flimsy material, but also a sign that the game can expect to see the light of day often. The mounted game board and thick markers are solidly made, and the metal villain control markers are fantastic.

Overall, though, Harry Potter Hogwarts Battle is a fantastic game. It may not be a revolutionary deck builder, but it more than makes up for it with its excellent combination of theme, customization, and replay value. The innovative nature of the game comes from its ability to evolve as you explore the game box options. Harry Potter fans can rejoice that there’s a game worthy enough to play out the struggle for Hogwarts, but this deck builder would be a great pickup for any deck building fan or even those curious about the genre. It’s certainly one of the better games to come out this year.

Harry Potter Hogwarts Battle's deck building game will not only appeal to both newcomers and seasoned veterans, but it will challenge both groups as well. Potter fans will love how the game mirrors the journey of Harry and his friends, but anyone can appreciate how the heroes and villains grow as you progress through the decks. The mechanics may play it safe, and the cards could certainly be thicker, but Harry Potter Hogwarts Battle is well worth your time.