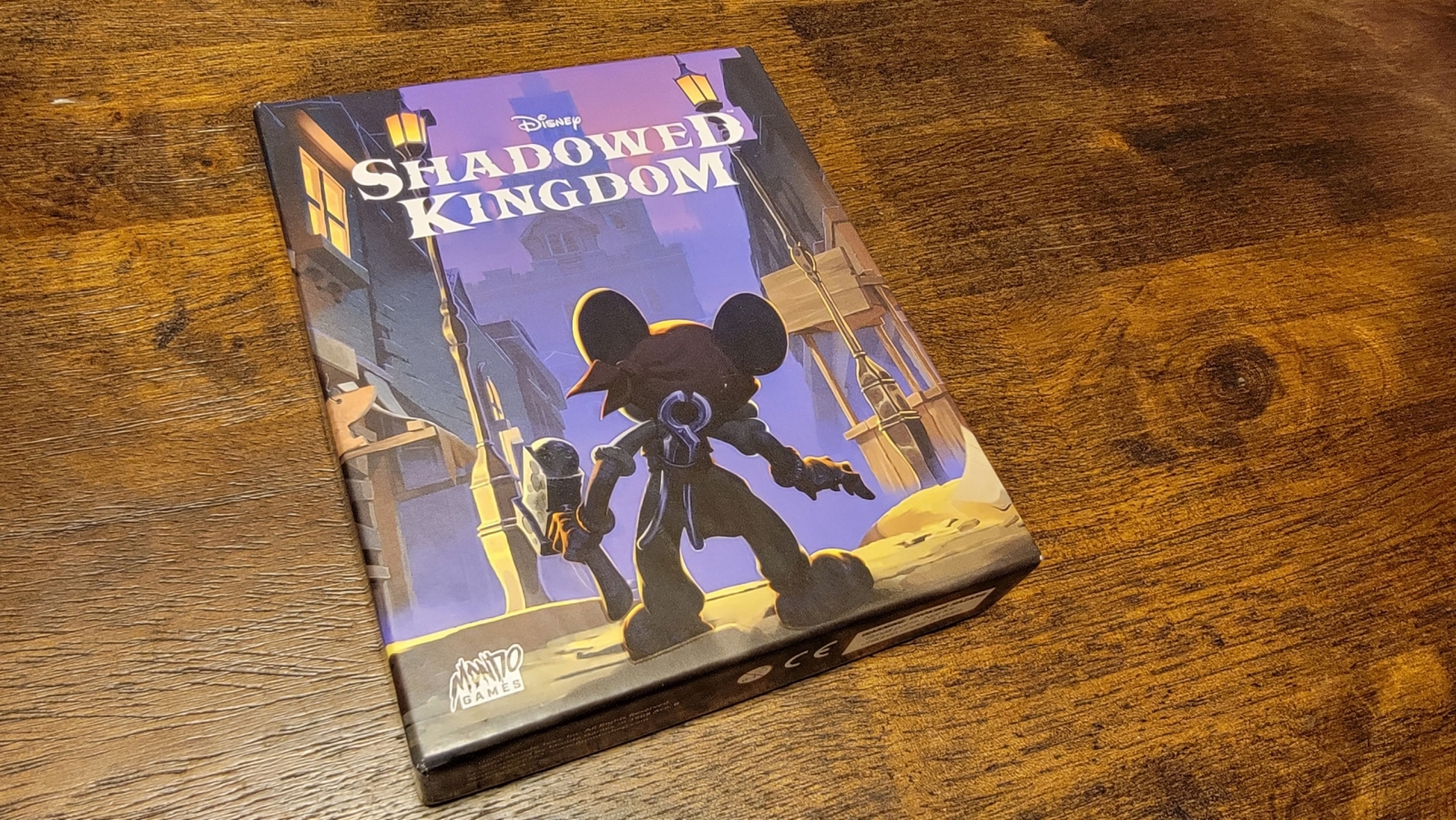 Disney: Shadowed Kingdom by Mondo Games is a fast-paced, easy-to-grasp card game in which two players must work together without speaking to explore and save the Shadowed Kingdom. Featuring game design by Darth Rimmer and illustrations by Marcel Mercado, Shadowed Kingdom is intended for two players, ages 8+, and typically takes anywhere from 15 to 30 minutes to complete a full game. 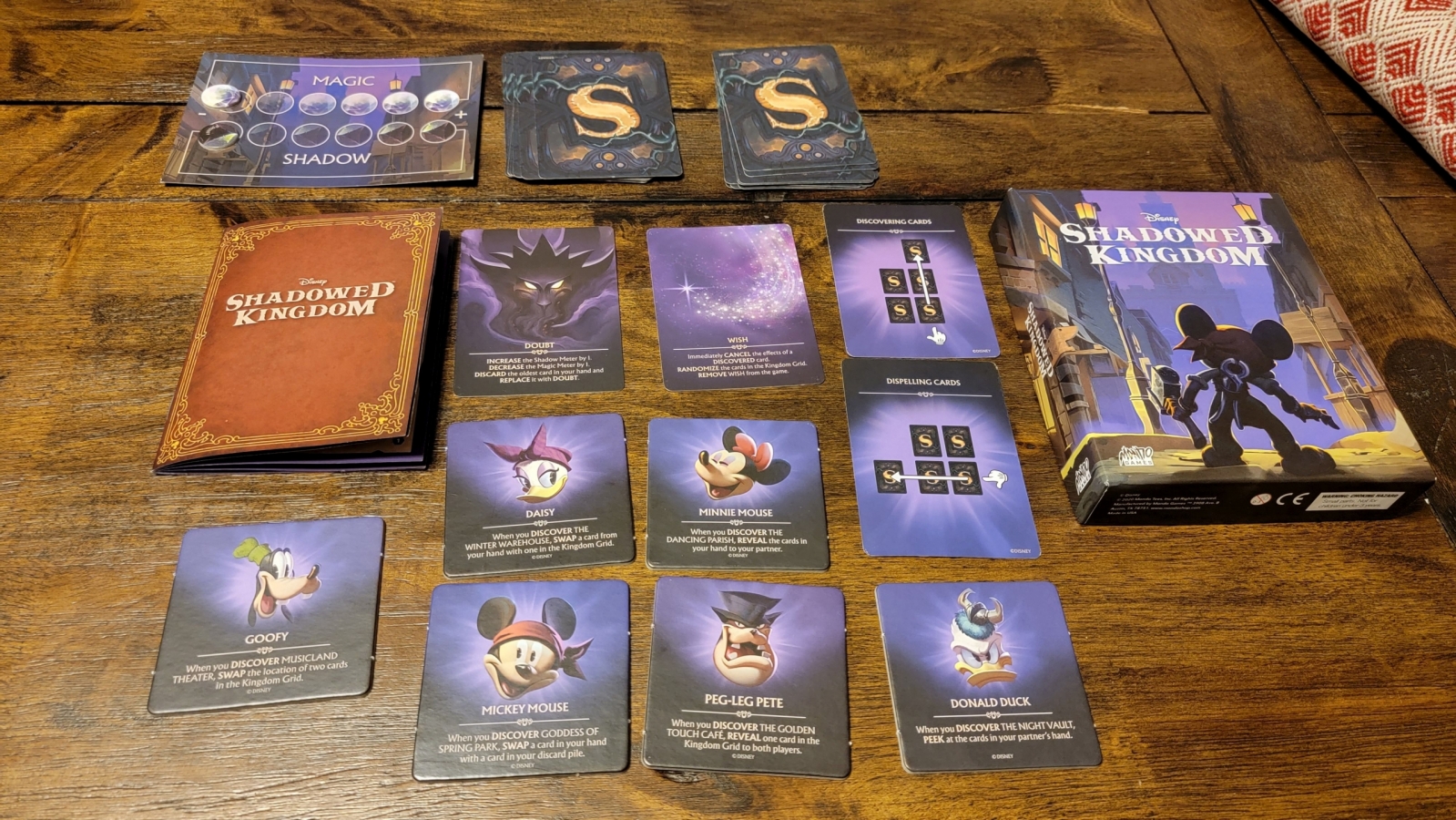 Shadow has overtaken the Kingdom, forcing Wish, the Kingdom’s caretaker, to set off in search of brave adventurers to help restore the balance of magic. Luckily, Wish stumbles upon you and a friend, both eager to take down evil. As time is of the essence, Wish decides to expedite the process of finding the lost Magic elements by having the adventurers explore opposite sides of the Kingdom. To defeat evil you must collect enough Magic elements to ward off Shadow before Shadow gains too much power.

While the story provides an interesting set up, that’s really all it is there for. Essentially the game wants players to fake being on opposite sides of the Kingdom, therefore being unable to communicate. Throughout the game you must remain silent about the cards in your hand, instead relying on your memory as to which cards you’ve laid down and any subtle cues you may gain by observing your partner’s actions on the board. While there are a few instances in which you are allowed a glimpse at your partner’s cards, they are few and far between and cannot be relied on for victory.

Shadowed Kingdom is simple to play, incredibly fun, and is over almost too quickly. It is a game based around planning and memorization, but is unfortunately hindered somewhat by forcing players to rely on luck a bit more than I would have liked. Still, the game never feels as if it is cheating, instead forcing players to work together despite the odds stacked against them. 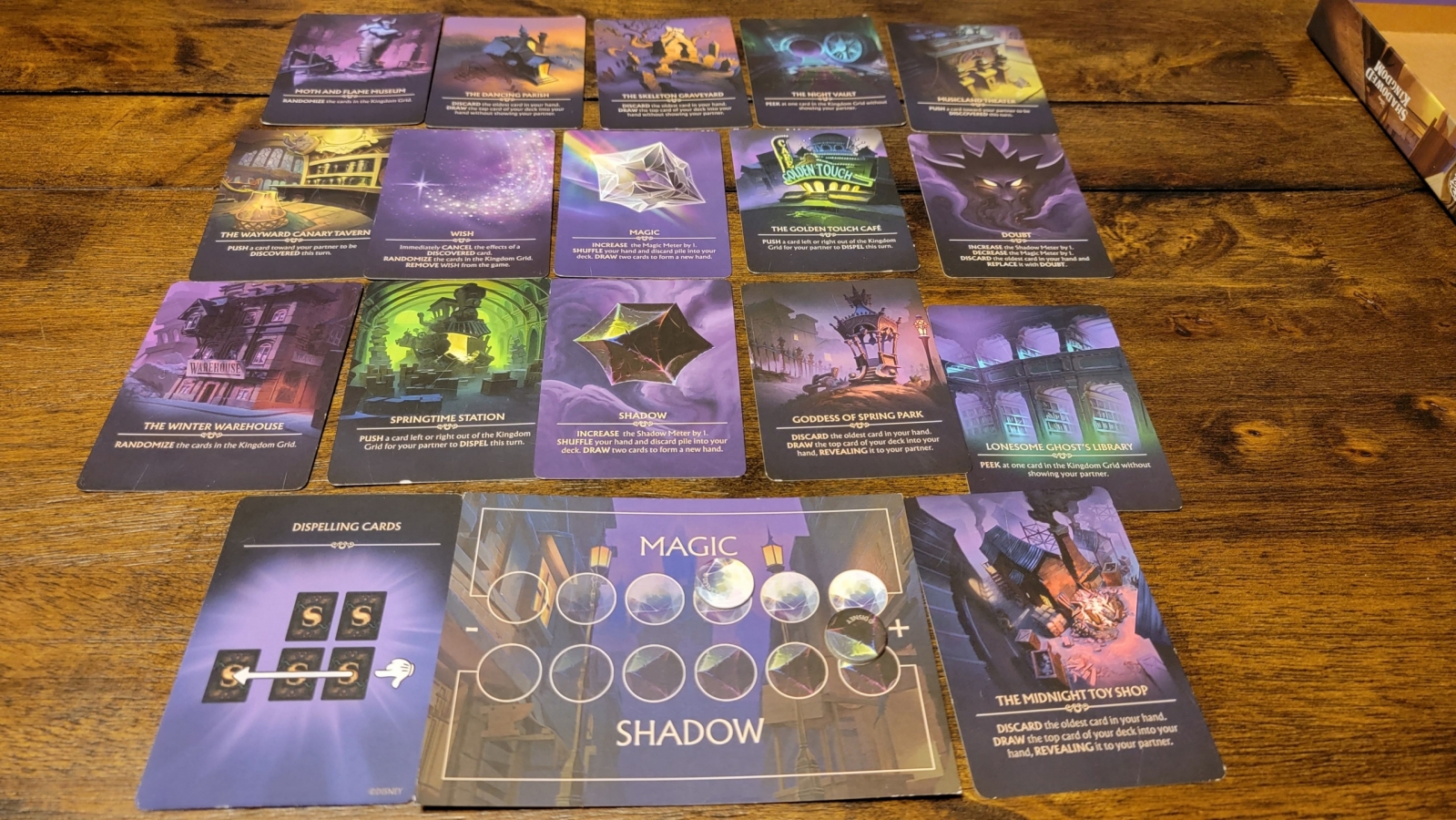 Unlike some card games, Shadowed Kingdom never feels daunting. The small box the game is enclosed in holds only 24 Main Cards, 6 Hero Cards, 1 Magic Tracker, 2 Tokens – one for Magic and another for Shadow, and 1 Rulebook.

The 24 Main Cards are further broken down into 12 Location Cards, 3 Magic Cards, 5 Shadow Cards, 1 Doubt Card, 1 Wish Card, and 2 Reference Cards. Location Cards work in tandem with the Hero Cards to unlock special abilities and also provide steps that the player must take anytime one is discovered; the Magic Cards are the players’ only way to move up a step on the Magic Tracker, while the Shadow Cards move Shadow one step closer to winning; the Reference Cards are there solely to remind players the proper method of Discovering or Dispelling items;  the Wish card is a one-time use card capable of preventing an action from being played and allowing the reshuffling of a player’s deck; and the Doubt Card is thrown in for those who wish to play an advanced version of the game (more on that later).

The goal of the game is to Discover the cards you need to move the Magic Token one step up the Magic Tracker, while Dispelling the cards that would move the Shadow Marker closer to victory. If the Shadow Token reaches the last spot on the Magic Tracker before the Magic Token does, then it is game over. To add a bit of tension to the game, Shadow definitely has an advantage due to the number of cards which are capable of allowing Shadow to progress, so both players must pay incredibly close attention to the cards being laid down, the cards which they have not yet seen played, and the potential repercussions of their choices. 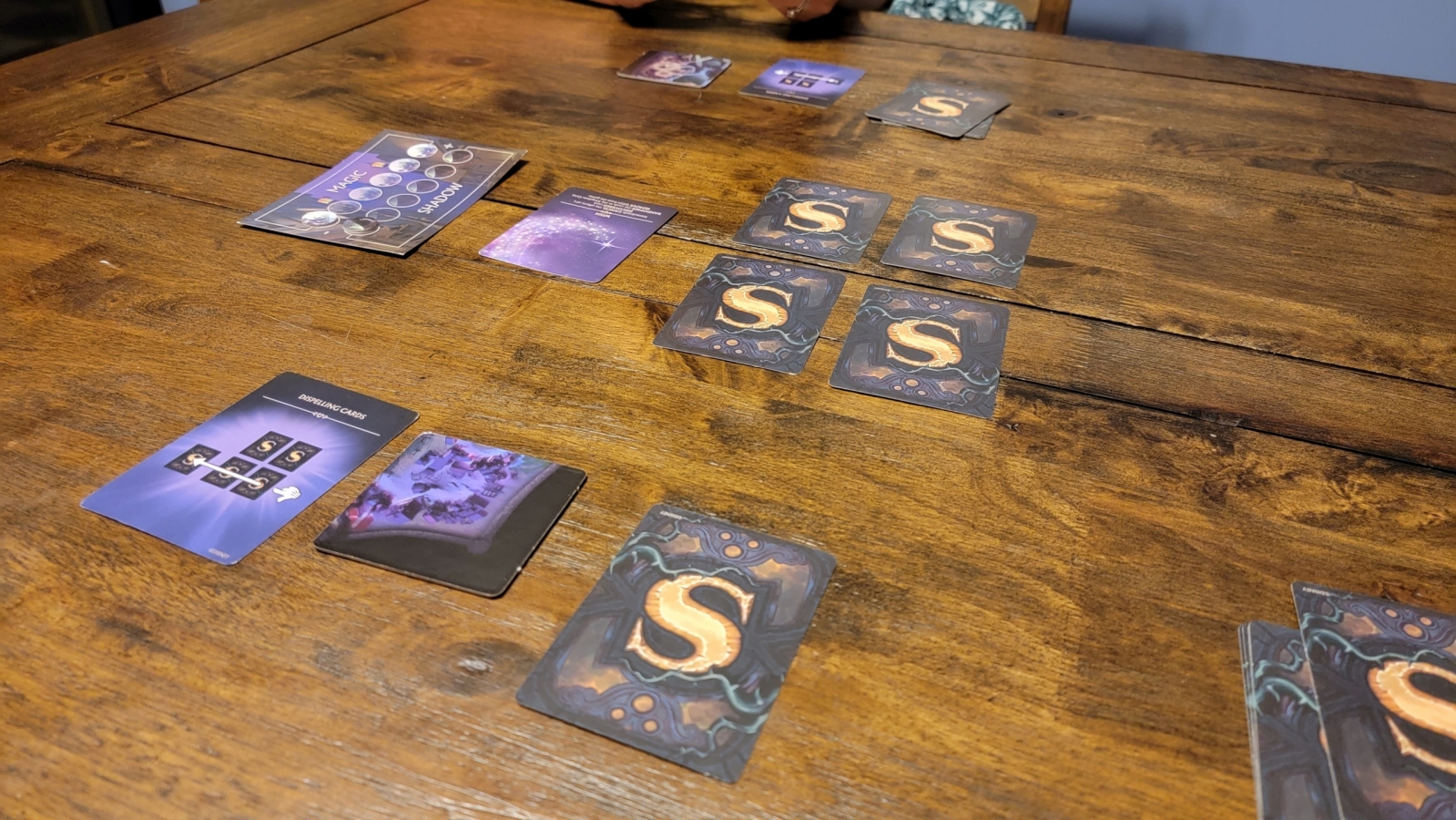 For such a simple game, my partner and I found ourselves having a thrilling, yet stressful, time attempting to thwart Shadow. While there is a small learning curve, we had mostly fallen into a nice gameplay flow by our second shot at the campaign.

You begin by randomly selecting a Hero Card, which you place face up on the table. Each Hero Card names a specific Location Card and action, so when that Location card is Discovered you can choose to either perform that action for free, or skip it entirely. Players then remove the Wish card and lay it aside, discard the Doubt card (unless going for the advanced version of the game), and split up the two Reference Cards between players. One player must then shuffle the remaining twenty cards before breaking it down into two decks of ten cards each, and laying both decks face down on the table. Each player will then choose their deck at random.

To begin play each player must draw the top two cards from their deck, look at them, memorize what they say – especially whether they will help or hurt you in reaching your ultimate goal, and then lay them in the middle of the table. The other player will do the same, thereby creating a 2 x 2 grid. Players cannot look at the cards in the grid, and cannot communicate to their partner the cards they laid down, instead they must watch the other player’s actions to determine if an unknown card is helpful or hurtful. 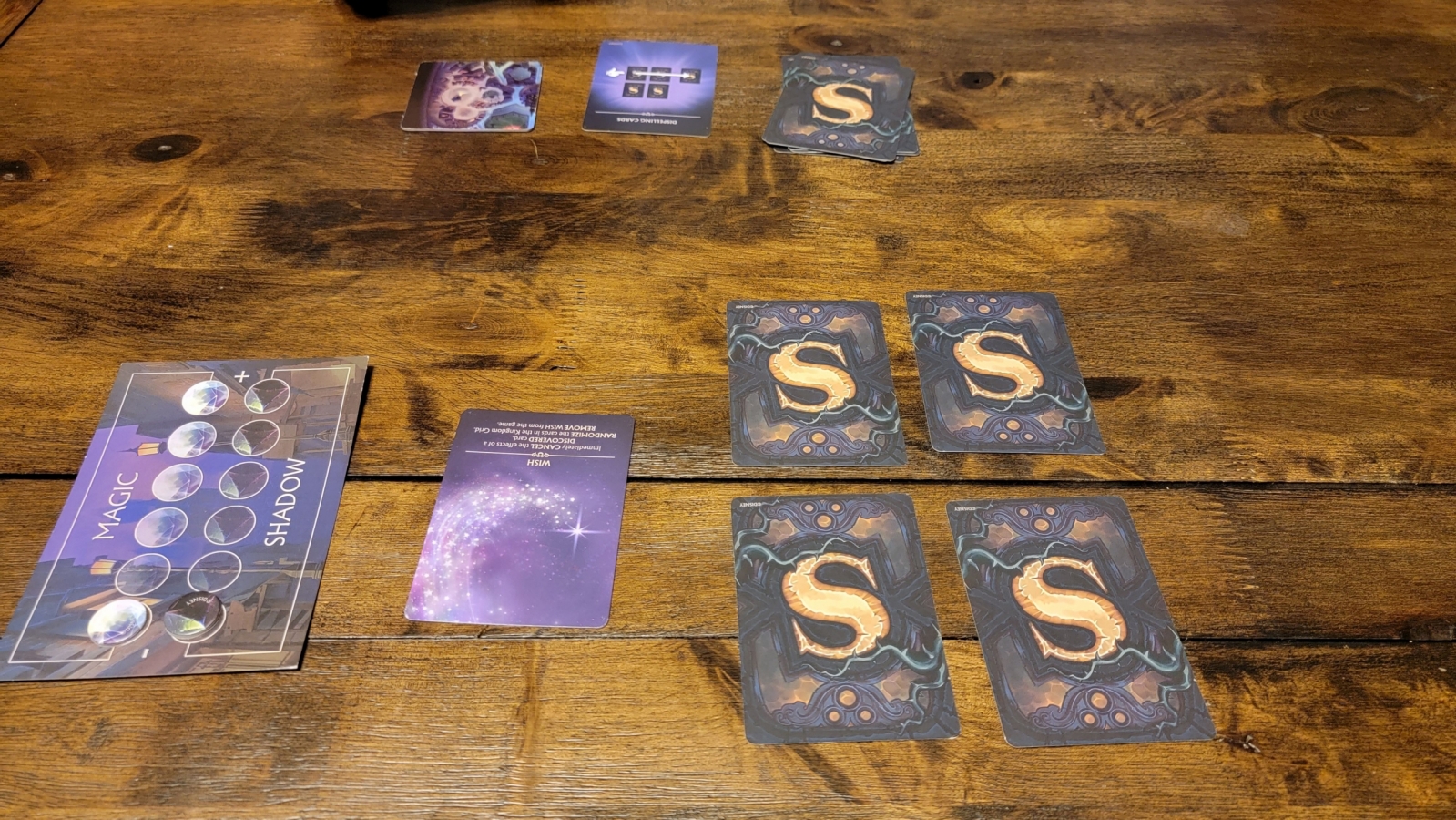 To progress, player 1 must draw and always have in their hand two cards, while player two will draw 1 card and will only ever have 1 card in their hand at a time, unless a played card specifically states otherwise.  When it is a player’s turn they must either push a card toward their partner to be Discovered, or push a card to the left or right to be Dispelled, always leaving a 2 x 2 Kingdom grid. If a card is pushed toward the other player to be Discovered, then they must perform whatever action is on that card, whether it involves moving the Magic token up a step, moving the Shadow token up a step, or one of the many actions required by a Location Card, and then placing that card in their discard pile. If a card is pushed to the side to be Dispelled then the other player must flip that card over and place it in their discard pile and then pull the top card off their deck and perform the actions required by that card. This continues until either the Magic Token or the Shadow Token reaches the end of the Magic Tracker.

The goal is to try to help your partner Discover helpful cards, such as the Magic cards, and to Dispel hurtful cards, such as the Shadow Cards. Memorization plays a key role as the cards in the grid are always face down and players are not allowed to communicate their knowledge of what the cards hide. Every chance you have to see, Discover, or Dispel a card is a chance to figure out what the board may still be hiding.

Shadowed Kingdom provides a tense back and forth, where players must rely on their partner’s memorization skills and a large helping of luck to pull the correct cards necessary to win. Shadow will always have an advantage, with its 5 cards to the Magic’s 3 cards, but that does not mean that it is impossible to win. 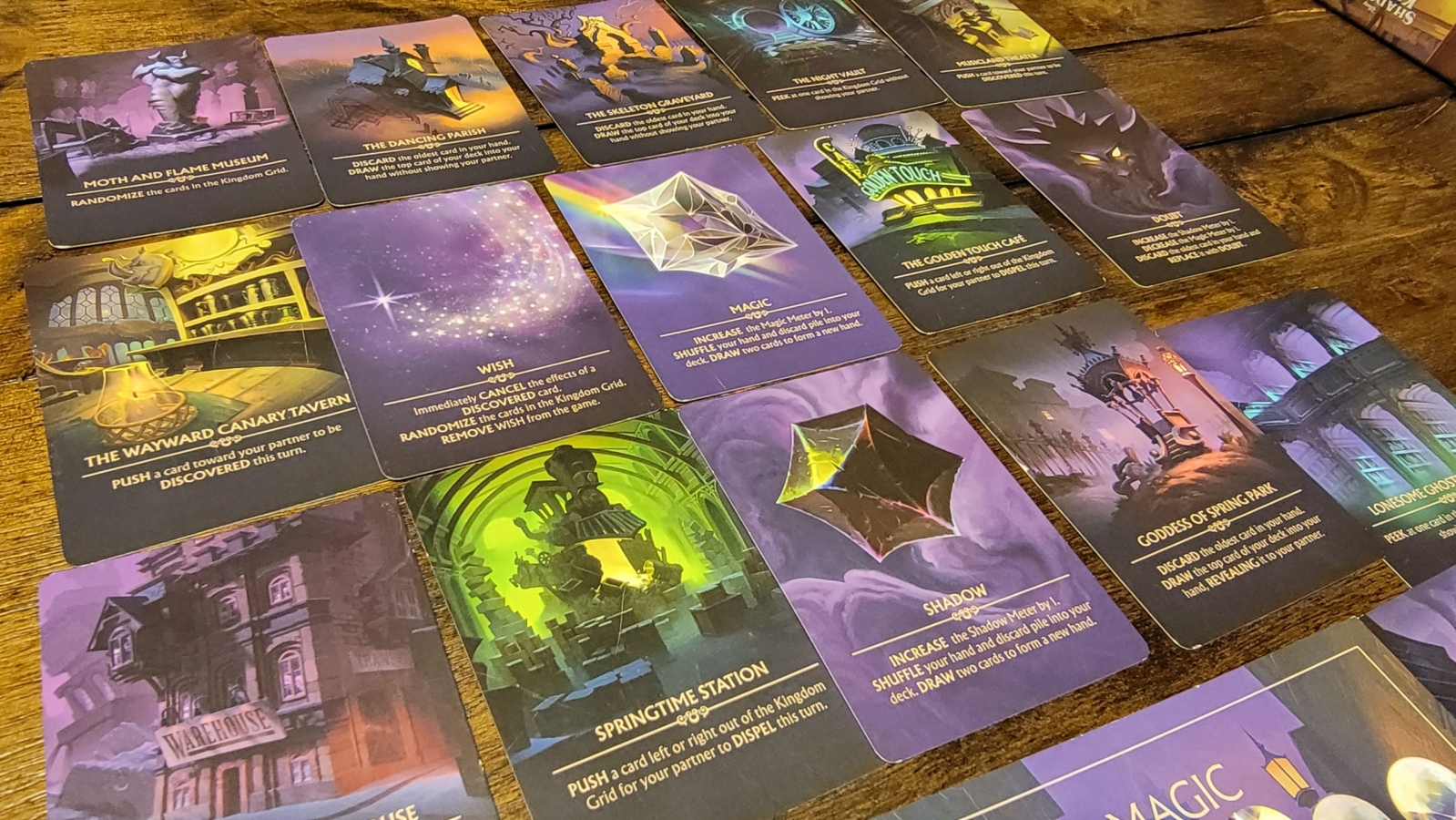 While Shadow got the better of us our first few turns, we found ourselves immediately diving back in – better prepared and ready to overcome our objectives. When we finally won it was an immensely satisfying feeling. I’ve always enjoyed co-op games, and this is a special type of co-op where you can’t communicate, yet still must rely on your partner to make the right choices.

While I wish matches were longer, as they average around 15 minutes each unless you stumble upon a particularly good mixture of good and bad cards in each player’s deck, it helps that the game requires only a moment to set up for another round, allowing players to jump back in nearly instantly.

For those hoping for an extra challenge you can add the Doubt card into one of the decks, forcing players to move Shadow up a notch and lower Magic down a notch any time it is played.  The Doubt card definitely adds more stress to the proceedings, as players will need to focus on Dispelling that card anytime they know it is on the board, but otherwise did not affect the flow of the game much. That said, we found that we preferred not to give Shadow any more of an advantage than it already had, and rarely added Doubt into our deck. But your mileage may vary and as you become more proficient at the game you may find yourself enjoying the added challenge.

Shadowed Kingdom was not at all what I expected, especially since it is labeled as a Disney game, but Disney never factors into the game at all aside from Disney characters being present on the Hero Cards. The game is fast paced and fun, yet has enough nuances to ensure that multiple playthroughs do not become stale. That feeling of “just one more game” every time you lose is real, and the thrill that comes from a hard-earned win is incredible, mainly due to the unique teamwork involved.

Richard Allen is a freelance writer and contributing editor for various publications. When not writing for Gaming Trend you can find him covering theatre for Broadway World, movies and TV for Fandomize, or working on original stories. An avid retro gamer, he is overly obsessed with Dragon's Lair. Chat with him via @thricetheartist on Twitter and @richardallenwrites on Facebook and Instagram.
Related Articles: Disney Shadowed Kingdom
Share
Tweet
Share
Submit