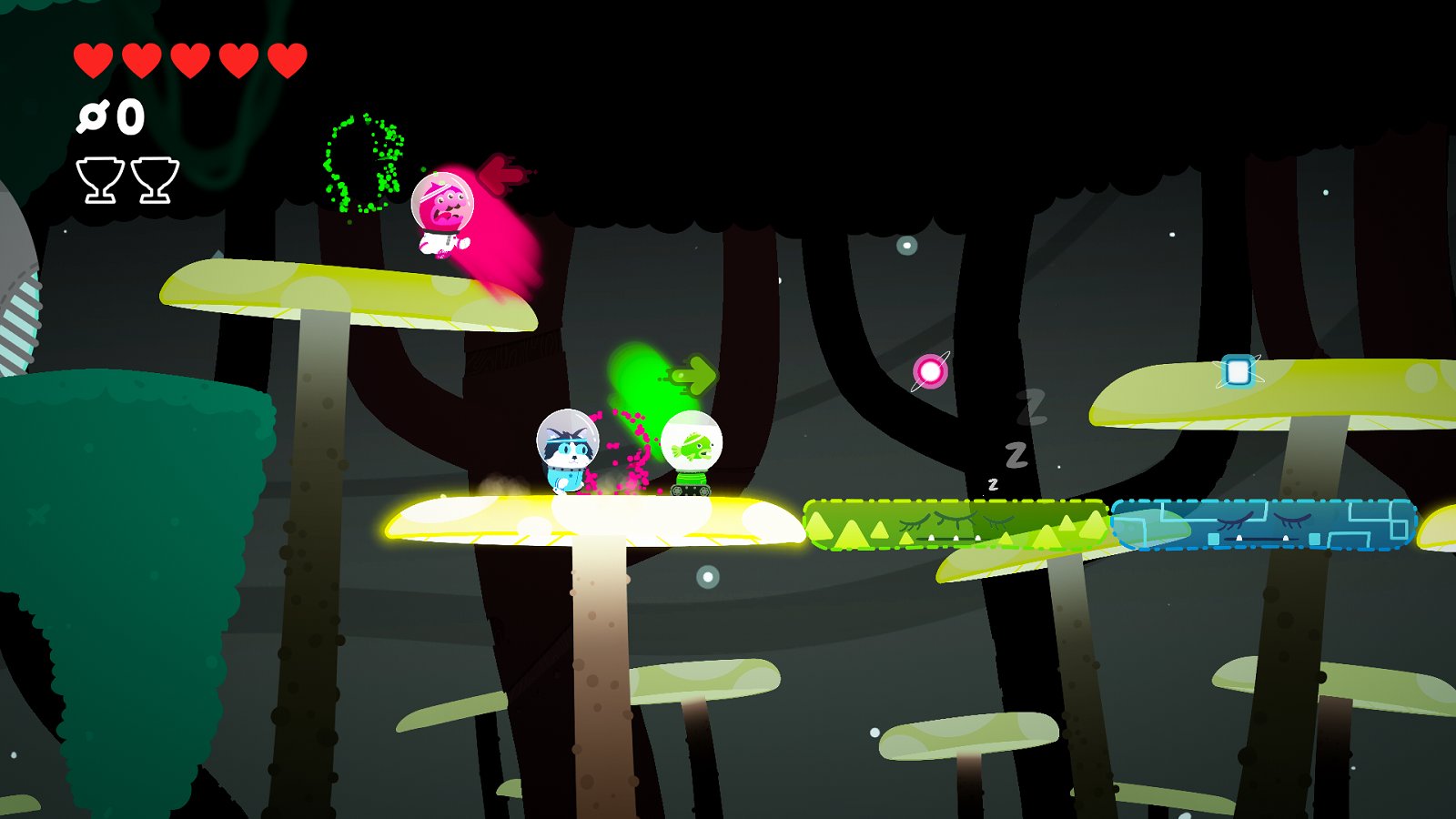 I’m a big fan of couch multiplayer, and local co-op games have been coming out in full swing lately. Whether I’m barking orders in Lovers in a Dangerous Spacetime, roleplaying Gordon Ramsay in Overcooked, or thinking I’m adequate at crafts in Snipperclips, I do love a good time with friends. While these games are frustrating at points, the fun had with these experiences outweighs the negatives, and this creates a worthy game to play with others. Joggernauts, on the other hand, gets too overwhelming and ratchets the difficulty to a point where it’s no longer entertaining to see you lose after dozens of retries. While it sports a fun aesthetic and cute atmosphere, the mechanics and game design make this a trying title.

Joggernauts pits two to four players together (or one player acting as two people) as they obtain trophies after an accident causes their robotic coach’s trophy collection falls out into the abyss of space. In order to do this, you’ll have to line up and explore three different planets as you jump and crash into different colored obstacles. It’s a silly little premise that demonstrates the cute atmosphere of Joggernauts, and the neat 2D graphics were beautifully animated. The soundtrack is also appropriately frantic yet fun, and contributes to the adorableness of the finished product.

The control scheme of Joggernauts is accessible to everyone, as the game acts like an auto-run platformer. The two-button gameplay system dictates that you can jump and switch the leader in the front of the line. It’s a quick control option that means you can just play with Joy-Con controllers on the side, perfect for two players that want to play in tabletop mode. You can also have four players huddled around, but for any audience greater than two, docked mode would work best.

…Which is what I would say if the game wasn’t actively fighting you in each stage. As previously mentioned, you’ll have to coordinate jumping mechanics in order to make it to the end of the stage. Different colored baddies and walls prevent you from just waltzing through, and you’ll have to switch your leader’s color every time you see one; choose the wrong color, and your leader dies for a couple of seconds. There are also a couple of trophies littered around each stage, and you’ll need to collect enough of them in order to progress each world.

At first, this concept is straightforward, and I cleared the first couple of levels flawlessly as a solo entrant. However, by the time I got through the third stage, I was frantically trying to keep up with my characters. Playing with a few friends, we realized that this game is probably a hidden tool to break up friendships, much like Snipperclips. Let’s just say it was a bloodbath and leave it at that.

However, while Snipperclips is a more relaxed experience, Joggernauts feels like an exercise in futility (pun intended). Describing itself as Bit.Trip Runner mixed with Overcooked, the game certainly has the level of difficulty and auto-run gameplay of the former as well as the co-op frustration of the latter. However, what it lacks is the sense of communication and teamwork that is present in all great co-op titles. Switching the front leader can be done by anyone at any time, but unfortunately, the inertia and vertical position of your character switches position. This means that you could be in mid-jump and suddenly cancel your jump as you’re in the back of the line. This is fine if you’re on horizontal ground, but it’s a nightmare when you have to traverse different stone platforms, where you have what seems like milliseconds to recalibrate your before you head straight into a pillar of death.

And that’s the main problem with Joggernauts: It requires the precision and coordination of a difficult pixel-perfect platformer but uses the floaty mechanics of a multiplayer party experience. Imagine playing something like Slime-San with the physics of Octodad and you can see the problem here. The game calls for perfectly timed jumps, yet your characters can be bouncing around. You have a shared life bar of five lives, which goes down each time one of you bites it, but with the way the game works, you’ll all probably end up dying before you can fully deplete the meter. The main issue with this is that there’s no mercy invincibility (did the character with the same color in your next obstacle die? Well, goodbye to the next one in your lineup!), so one mistake can lead to a total party kill if you happen across an unlucky placement of colors.

While an unlimited continue system and generous checkpoints do alleviate the situation a bit, it’s rather frustrating to spend thirty minutes on a stage that should last less than a couple due to the unfair death system. There are modifiers that can ease the challenge (like more lives or running the game at a slower speed), but even with these activated, it still was inevitable that my group would die because of a stupid mistake.

I really want to like this game. It has an art style and aesthetic that screams cute and cheeky, and the soundtrack is an eclectic, exciting mix. However, there are way too many things that Joggernauts does that turn it off from being one of the titles in my next game night.

While the presentation is charming and amazing, Joggernauts ultimately fails as a casual party game. With its unfair death mechanics and steep difficulty curve, it’s one that will appeal to groups that want a challenge, less so for ones that want to have a fun time.

Elisha Deogracias is an aspiring accountant by day, freelance writer by night. Before writing for Gaming Trend, he had a small gig on the now defunct Examiner. When not being a third wheel with his best friends on dates or yearning for some closure on Pushing Daisies, he's busy catching up on shonen manga and wacky rhythm games. Mains R.O.B. in Smash. Still doesn't know if he's a kid or a squid.
Related Articles: Indies, Joggernauts
Share
Tweet
Share
Submit