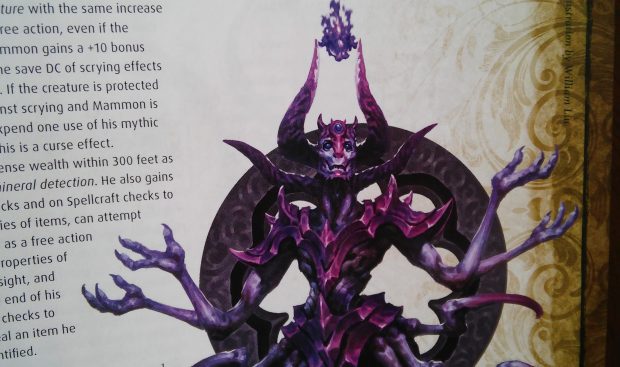 Pathfinder has been going strong for nearly ten years now, which in RPG terms is fairly long in the tooth. Its bevy of supplements and adventure paths have grown so prolific that it is now releasing not its second or third or even fourth bestiary, but its sixth, and clocking in at a full 320 pages and 233 monsters. New antagonists are critical to keeping a game fresh, but how can you present players with material that feels new this late into the game’s cycle? Paizo chose two options that work together excellently: make the enemies powerful, and make the enemies weeeeiiiiiird. The payoff is impressive, and ends up as one of Pathfinder’s strongest bestiaries to date.

Coming not long after Occult and Horror Adventures, Bestiary 6 brings you enemies that will fill you with awe and terror in equal measure. The writers appear to have been given free reign to get experimental, and the horrifically creative enemies on display stand as testament to the wisdom of this decision. A sludge made from the decayed remains of the dead taunts you with a shattered human skull for a face. A dimensional hunger formed from an accident of fate, a Gelatinous Cube eating a Bag of Holding, eternally hunts for prey. A spider with white bones for limbs and a still-beating human heart as a thorax skitters at you from a redstained hall. It is not alone.

The smattering of creatures I just mentioned are some of the low level threats hiding in the pages of Bestiary 6. After so many years in development, Paizo understands your heroes are up for the greatest of challenges, so it has pulled out all the stops in creating some of the mightiest foes yet. Published adventure paths never reach into the highest Challenge Ratings, but Bestiary 6 scoffs at that cap and keeps the pressure up, all the while reveling in the terror such foes will bring.

In this book you will find gods, archdevils, demons, dragons, and more. Each is not only deadly, but beholden to a unique cultural origin, and prolific enough to be the main antagonist of any tale. The book often devotes text not only to their personal nature, but that of the dark cults that follow them. Each of these enemies is beyond imposing, and are legitimate threats to even the a seasoned, optimized party.

Their art design is particularized to each one; from the ground up their portraits were made with their fell nature in mind and exemplifying their motivations. The Archdevil Mammon’s body itself twists with the unworldly mystery of the evil sigils you would use to summon him, and his many arms grasp for more, as befits a devil of avarice. Belial the hedonist is every bit the beautiful fallen angel he would need to be to tempt so many to vile hedonism. With all the abstract yet functional enemies, each of which are fully realized in detailed paintings, Bestiary 6 is almost as worthy an art book as it is a monster manual.

The breadth of influences are impressive, and help to cement Bestiary 6 as a unique and versatile entry into Pathfinder’s line. Japanese culture comes into play, as do Biblical tales and a brief nod to Austrian monsters with the inclusion of Krampus. The fabled Wild Hunt gets a nice writeup as well, spread over the lore pages of several of its most dangerous members.

Yes you read that correctly. Krampus. And he is a BEAST

While there are a few such tongue in cheek references, they are played (and statted) seriously enough that they pose threats. As a Godzilla fan, I particularly appreciated the King Ghidorah standin in the Kaiju section of the book. Oh yes, there are multiple Kaiju for you to use, if things ever get that absurd and you just need everyone to die.(Godzilla threshold? Ha!)

By far my favorite influence, whatever its complex roots, are beings of cosmic horrors from the Lovecraft mythos. Elder Gods are here to drive your characters into insanity, but there are also minions and smaller denizens of the outer planes. These entities will drive your characters insane in new and fascinating ways. My favorite might be one avatar of Yog-Sothoth’s ability to merge the character’s mind with another. The possibilities for characters or even enemies make that ability fodder for numerous adventures.

If anything is more imposing than the monsters themselves, however, it is the prospect of preparing one for a session of gameplay. For the higher level monsters, it is not unusual for their stats to take up an entire page or even more, given all of their special properties and abilities. Banking on the extensive history of Pathfinder presents another problem, given how many of said abilities are actually explained in other books. To fully understand a given enemy, you will have to find a way to make not only the figures written in Bestiary 6 palatable, but those included in other books as well.

The extensive space that these stats take up also forces some of the lore and behavior to get condensed. The book is actually careful about making sure that it explains the essentials of every creature, and the bigger enemies get space to dig into more of their special histories. The writing that is there is all intriguing, and any way that we could have gotten more on the creatures would have been appreciated.

While long, detailed stats are an old problem in Pathfinder that fans are probably useful, it is unfortunate to see the problem persist. Some see it as a feature that every enemy will have so many unique features to balance around, but even so the toll it takes on whoever has to control them is palpable, and slows not only the game but the process to prepare for it.

This portrayal is gorgeous and terrifying, yet those statistics to the left are only a fraction of the ones necessary to use this creature

Any bestiary author has to understand that not everything adventurers encounter in their travels is an enemy. Bestiary 6 has animal companions never seen before, my personal favorite being the Clockwork Hound. What could possibly be more dependable than a dog mixed with a clock, I ask you? More unique are strange races that could be friendly to your players. Some of these hale from the same eldritch climates as the Great Old Ones themselves, and might pass on useful lore. All of them are intriguing, but not necessarily helpful, and that is where they become the most interesting. These races have their own motives and behavior. Each is different, and each well worth including in your stories.

The appendices are, predictably packed to the brim with useful tools and lists that help you make the most out of Bestiary 6. Not only are there the usual lists of monsters by type, challenge rating, and environment, but new templates to modify monsters as you see fit. You can mix and match abilities or take a normal beast and turn it into something deadlier and more fascinating than it was before. Take a normal creature and make it into an angel, a clockwork reconstruction, or even a Kaiju if you see fit. The possibilities are as numerous as the end results are terrifying.

Pathfinder’s latest Bestiary is a welcome addition to the game, bringing massively powerful foes from many origins to give your players the greatest challenge possible. I am impressed by their variety, their quality, and the true care that was made in crafting each one of them. Running these monsters will be almost as much a challenge as fighting them, but you can't help but appreciate the care that was put into this book.

John Farrell is a legal aid attorney specializing in domestic violence, living in West Chester Pennsylvania. You can listen to him travel the weird west as Carrie A. Nation in the Joker's Wild podcast at: https://jokerswildpodcast.weebly.com/
Related Articles: Pathfinder Bestiary 6, Tabletop
Share
Tweet
Share
Submit