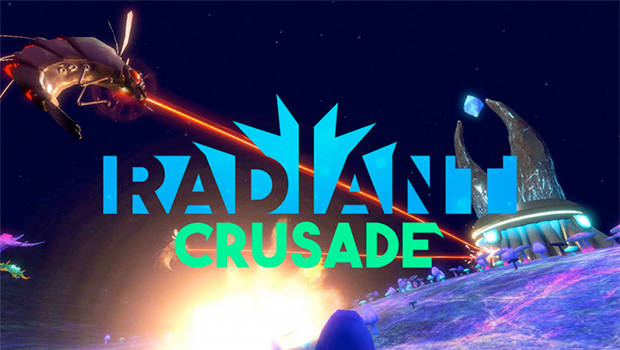 My office celebrated surviving yet another week with a Friday afternoon Mario Kart 8 Deluxe party. Joy-Cons jumped from hand to hand, banana peels and colorful turtle shells were flying around, and customizations seemingly unlocked after every race. I could think of no better way to conclude this evening than than by inviting everyone to dive into Radiant Crusade, a colorful game which uniquely combines the racing and wave defense genres in one VR game.

I had never before encountered a racing wave defense game, but the idea fascinated me. As it turns out, Radiant Crusade feels rather like Battle Mode in Mario Kart 8 Deluxe, but in virtual reality which requires constant head movement. Your goal is to race around the terrain, avoiding glowing, impassable fauna while blasting alien bugs, which are hellbent on destroying your tower, out of the air. The mechanics are pretty simple and those who enjoy either racing games or shooters are sure to get some real enjoyment out of this VR experience, though they will likely find it lacking in a few features.

A combination of racer, shooter and wave defense, Radiant Crusade is a unique VR experience

For starters, while Radiant Crusade has a minimap, it is located below the windscreen and requires you to look down in order to view it. This means that it’s difficult to know where you are, unless you move your head down, which moves your aiming, and the constant head moving adds to motion sickness (more on both below). The environment is gorgeous, a dark world with bioluminescent plants, ranging from ordinary mushrooms to strange, succulent-looking trees which will slow down or even stop your vehicle upon collision. The downside to this environment is that the enemies are rather dark, and plants glow far more brightly than your targets. The minimap does show enemies, but the radar only extends a few feet in front of your vehicle, making your experience very nearsighted. You do, at least, receive a notification if your tower or vehicle are under attack. Once you come under attack, however, another conflict arises; the problem of actually targeting the creature attacking you.

This game features wonderful controls which are intuitive even to those unfamiliar with shooters. Played with a gamepad, the right trigger will propel you forward, building momentum as you go, while the left trigger will accelerate you backwards. The left thumbstick controls your direction, while the X button fires. Aiming your weapons is as simple a matter as looking at your target, since Radiant Crusade uses motion tracking for this feature, making it incredibly easy and fun to pick up. Unfortunately, while aiming may be easy when an enemy is in front of you, if the target manages to get behind you, or even just to the side and out of the view of your windscreen, aiming becomes a real problem. There is no way to rotate the cab or shoot behind you, no side or rear windows, and enemies are both quick and agile enough to continually move out of the way if you try and make a hard right or left in order to circle back around. This requires that you either try and wind around in unpredictable aways, tricking the AI into putting themselves in your view again, or throw your vehicle into reverse. Reversing is slow, but enemies do not seem to be intelligent enough to counteract this strategy as efficiently as they do a sharp turn. The other downside to reversing is that, with no rear view mirrors, it’s all too easy to have your progress blocked entirely by backing into one of the game’s many plants.

Despite having a windscreen to help anchor you inside the visor, this title still caused a decent amount of motion sickness in everyone who put on the visor, and it did so pretty quickly. A combination of fast speeds, sharp turns and constantly moving your head to target enemies, check the minimap and check where you are going all compounds pretty quickly. If you are uncomfortable riding in cars or trains, then you should avoid this game entirely, as this game amplifies this kind of movement. We had several people who are perfectly comfortable riding in cars, but who became very uncomfortable very quickly.

Without a minimap, it’s easy to get lost within this alien world

While this is described as a wave defense game in which enemy waves become increasingly difficult, it actually feels more like enemy waves simply include greater numbers of enemies. While my sample is admittedly a bit limited, as no one was able to say in the visor for more than twenty minutes at a time, we did not find any great variety in the defenses, capabilities or tactics of new waves of enemies. Radiant Crusade offers a whole series of upgrades and customizations to the vehicle, something those with an iron stomach may find incredibly fun and rewarding, the factors describe above kept our group from being able to explore these features in any great depth.

The unexpected combination of the racing and wave defense genre, Radiant Crusade is a colorful, high speed VR shooter. While not suitable for anyone susceptible to motion sickness, be it from VR or riding in cars, this title is enjoyable enough in short bursts. A lack of both minimap and contrast between the game's glowing fauna and enemies makes it challenging to master, despite its easy and intuitive controls.