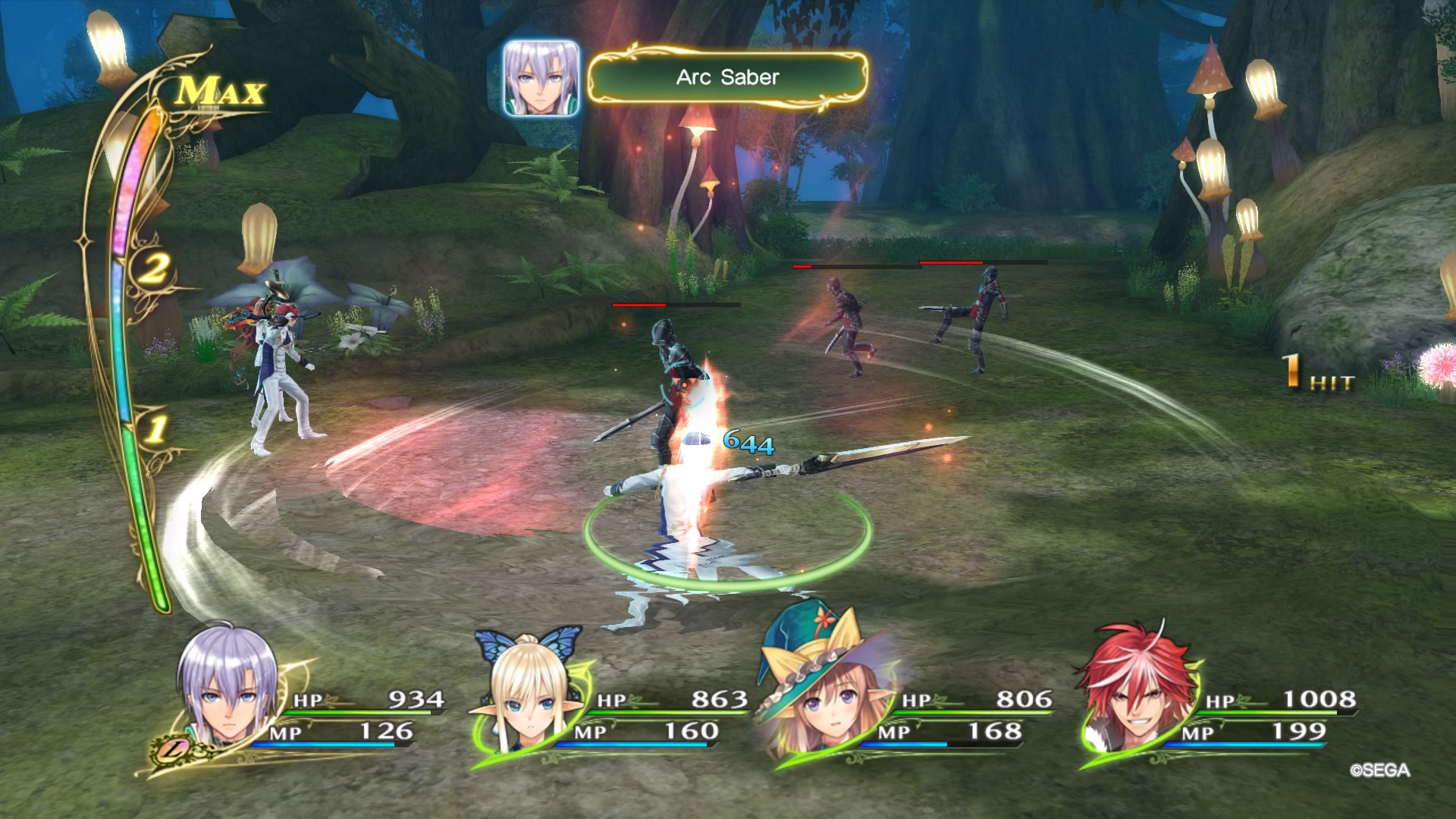 JRPGs are long, adventure-filled games that have amassed a large following over the years. There are many series, including the “Tales of” games, and the “Shining” games, but the latter hasn’t gotten much love until now. Shining Resonance was previously released only in Japan for the PS3, but now it’s making its way to the west as Shining Resonance Refrain.

Shining Resonance Refrain is the complete version of Shining Resonance, which includes all of the DLC from the original, along with a new version of the story called Refrain. This mode gives you access to two special playable characters, but it is best saved for a second playthrough in order to avoid spoilers and get the original experience first. That being said, the main story is very enjoyable on its own. Shining Resonance Refrain focuses on a young man named Yuma who contains the power of the Shining Dragon within him. This gives Yuma access to incredible power, but he is hesitant to use it because he is afraid that it could inadvertently hurt innocent people. There are times when the Shining Dragon speaks to Yuma, attempting to coerce him into using this power. Weighing the options of using this dangerous power against not being able to fight for others is a great dynamic for the main protagonist.

Yuma learns that the land of Astoria faces the threat of the Empire and their evil plans. The Empire attacks villages, performs horrible experiments, and wields the power of the Dracomachina, which are man-made dragons that serve the Empire. This fits the bill of typical JRPG villains, but that doesn’t hurt the game at all. In fact, this true to form story makes the game easier to latch onto. Yuma meets Dragoneers, who are essentially warriors for hire, that team up with him in order to fight against the Empire and stop their plans. I won’t go into more story details because it’s better to experience them for yourself.

The gameplay is easy to learn, but has a certain depth to it as you progress. You use circle to do normal attacks, triangle to do break attacks, X to dash, and square to guard. Normal and break attacks require AP to use; there’s an AP ring around your character that empties out as you attack. After a few seconds of not attacking, that ring will fill up again, allowing you to fight some more. Running out of AP can be a bit of a bummer at times, but it also forces you to fight carefully. You can’t just spam attack forever, and I appreciate that barrier. Break attacks are slower than normal attacks, but they help break an opponent’s defense. When their defense is broken, they are put into a break state, which reduces their defense, and makes them more vulnerable to your attacks. In other words, if you have a chance to break your opponent, do it.

The other important attacks are forces. Forces are your special attacks, which can be magic or unique physical attacks. You have access to moves like heal and restore, along with other specialized attacks for each character. Like Yuma can swing his sword in a circle, Kirika can fire a rain of arrows, and Agnum can launch fireballs. In order to use these moves, you must hold L1 and then click either triangle, circle, X, or square, depending on which button the move you want is assigned to. Forces require MP to use, which builds up as you hit enemies with normal and break attacks. You will unlock more forces as you play, and can configure which ones you want, and what buttons you want them mapped to. Unfortunately, each character can only have four forces equipped at once, so you’ll have to choose your loadout based on your playstyle. At the same time, four forces feels like a decent amount of special moves to have access to at one time.

Shining Resonance Refrain has two features that I find very appealing: Dragonshift, and the B.A.N.D. system. Dragonshift is Yuma’s ability to harness the power of the Shining Dragon and turn into said dragon. Holding down L1 and pressing R1 activates Dragonshift; pressing the same buttons during this form also reverses the process. This form increases Yuma’s strength, allowing him to inflict incredible damage, although his moves are limited. He can only swipe with his claws, shoot fireballs, and dash while slicing. While in this form, Yuma’s MP constantly decreases, but you don’t want it to get too low. If it reaches zero, or it gets too low, Yuma will go berserk. This forces the player to play as a different party member while Yuma attacks anyone near him, friend and foe alike. This dangerous change makes Dragonshift a risky move, but thankfully the B.A.N.D. system can help.

The B.A.N.D. system, otherwise known as Battle Anthem of Noble Dragoneers, is more useful than it may sound at first. The Dragoneers wield weapon-instrument hybrids called Armonics that allow them to not only fight, but resonate with the Shining Dragon’s energy in order to increase their strength and work better together. In the menu, you can choose a leader for each session, and different characters create different effects. For example, Kirika increases the critical rate of attacks, along with the accuracy of your attacks. In order to start a B.A.N.D session, you click R1 and then press X on the next menu that pops up. A short cinematic of your team playing their instruments plays before continuing the battle. Music notes float around your characters to signify the effects are taking place. There is a meter on the left side of the screen that is broken into three segments; in order to activate B.A.N.D., at least one segment must be filled. Once activated, the meter slowly drains, and the session will end once emptied, or if you press R1 and X to end it early. The B.A.N.D. sessions can also be used to instantly calm Yuma if he goes berserk, which is an incredibly useful and creative feature. This aspect is why I save at least one segment of the meter before activating Dragonshift.

The overworld is like many other JRPGs, where you run around as the protagonist through various areas. You’ll encounter enemies that trigger battles once you run into them. Once triggered, all other enemies vanish and an invisible arena is created as specified enemies appear. After you defeat your foes, the arena goes away, and you can continue your travels. Holding X allows you to dash infinitely, which is extremely useful if you want to cover large distances fast. Some enemies only appear in certain locations, while others only appear in certain weather conditions. The weather based monsters are an interesting touch, but it sucks if you need them for a quest. Speaking of, you can take on quests from various villagers, ranging from material collecting to defeating designated monsters. The side quests aren’t that important, but they can be useful if a villager is offering a reward that you want. Unfortunately, I’ve never felt that encouraged to take extra time for side quests; I usually completed random quests on accident as I played, and reaped the rewards.

The city of Marga is an important central point for Yuma and the gang. It includes businesses such as Rapple’s Workshop, Liselotte’s Shop, Lyle’s Studio, and the Seagull Inn. Rapple is the town’s alchemist that can create a variety of things with the materials you collect, Liselotte is the town’s main merchant, Lyle can tune your Armonics, and the Seagull Inn is a place to rest. Tuning your weapons allows you to add special effects to them, which can level up as you defeat enemies. You can also equip aspects to your weapons in order to improve your characters’ health, MP, attack, and much more.

Yuma is traveling with a group of friends, and what would friendship be without bonds? Each character unlocks traits as you progress and activate side events. You can only equip one trait per character at a time, and the traits equipped affect the bonds between characters. These bonds can improve the teamwork of Yuma and friends, so picking your traits carefully is important. Speaking of bonds, you can get closer to your teammates through late night chats. When you see a teammate that you want to improve your relationship with, you can invite them for a late night chat, and in most cases, they will accept. The only times they won’t are if you spoke to them the night before. So you’ll need to rest at the Seagull Inn or a campfire in order to trigger the chat, which is a nice change of pace. If you talk enough and get close enough, you can also go on dates. I couldn’t help but be lured in by the adorably goofy Rinna who likes to tease Yuma with suggestive comments. The dates are cute, and make you care more about the team you’re working with.

Shining Resonance Refrain is a typical JRPG that adds in its own creative twists to enhance the gameplay. Dragonshift and the B.A.N.D. sessions are really fun to play around with, plus they make your team much stronger. The team using weapon-instrument hybrids is a really cool concept, especially when you rarely see weaponized versions of guitars, trumpets, and more. In the end, the game is very fun, and will scratch that JRPG itch you’ve got; in fact, you may not even want to stop scratching once you start.

Shining Resonance Refrain is an entertaining adventure through a somewhat cliche story, but it contains its own unique aspects that keep you engaged. Combat is easy to learn, but there's a decent amount of depth to it. Dragonshift and B.A.N.D. sessions are wonderful combat mechanics that add more charm to the game. The relationship building and dating also adds a cute slice of life portion to the adventure.

Codi loves to play video games and watch movies. He will watch almost any kind of movie just to experience them. His ideas take inspiration from the shows and movies he watches, and games he plays. He also loves a good pun.
Related Articles: Shining Resonance Refrain
Share
Tweet
Share
Submit