The Tales of franchise is a long running series of games, and at sixteen installments, many diehard fans of the franchise consider Tales of Vesperia to be the pinnacle of the series. To celebrate its 10th anniversary, Bandai Namco released a remaster of the beloved title in the form of Tales of Vesperia: Definitive Edition. While I have played many, many JRPGs in the past, this is actually my first entry in the Tales Of series, so I jumped at the chance to review it.

Right when you’re fire up the game, you’re greeted by a high energy, almost frenetic anime intro scene. Anime fans will notice the animation looks a little familiar. That is because the famous anime production house, Production I.G., provided the intro cinematic. I’d argue that, while exciting, it’s a little too high energy, contrasting pretty harshly with the pace of the game. 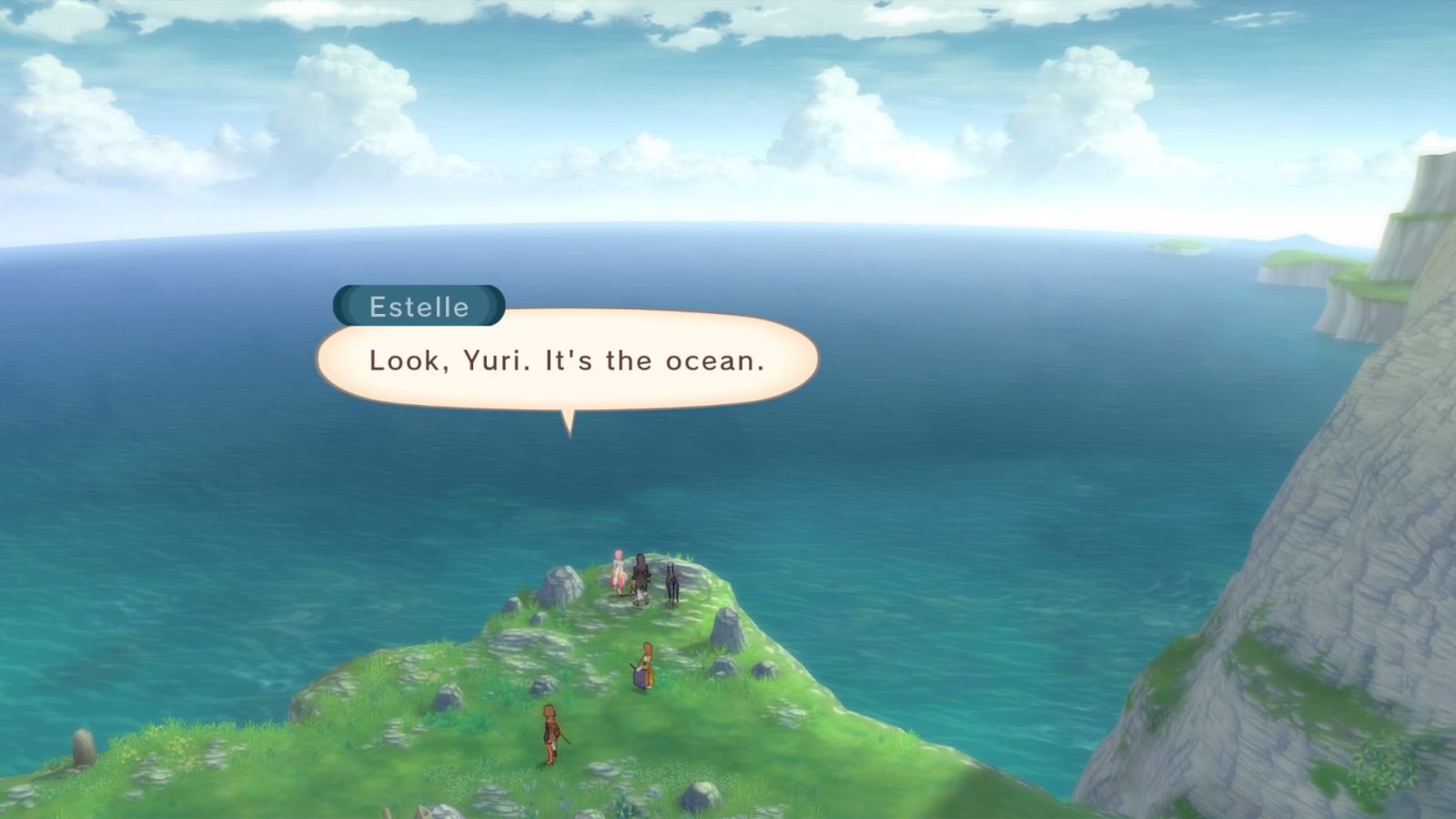 After the cut scene, you get into the meat of the gameplay, one baby step at a time. While it’s common for games to introduce important mechanics piecemeal, I found that I was still gaining access to new mechanics over 15 hours into the game. Talk about a tutorial level.

Unfortunately, the gameplay never really shines like other RPGs I’ve played, though I will say that the battle system in Vesperia is far more engaging than the traditional turn based whack-a-mole from the juggernauts of the nineties and early aughts. You can run around in a three dimensional battle arena, and with a little strategy, you can reorient yourself to gang up on monsters with your AI controlled companions, and even engage in some pretty impressive stun locking. The battle arts system is a little clunky to execute mid fight (though they can be incredibly cool), and I never found an AI setting for the companions where they weren’t either stingy with magic usage in boss fights, or way too MP hungry in regular grindy battles. So most of my fights involved me taking control of the healer and throwing out heals while running away from enemies and hoping my AI companions would kill them for me.
I will mention one fight, fairly early on. There’s a boss that really gives you a run for your money, chasing down your characters and biting off huge chunks of their health while you try to address the numerous adds on the field. Luckily, the difficulty is an aberrant spike, and while later encounters were tough, I never encountered a difficulty increase that punishing again. 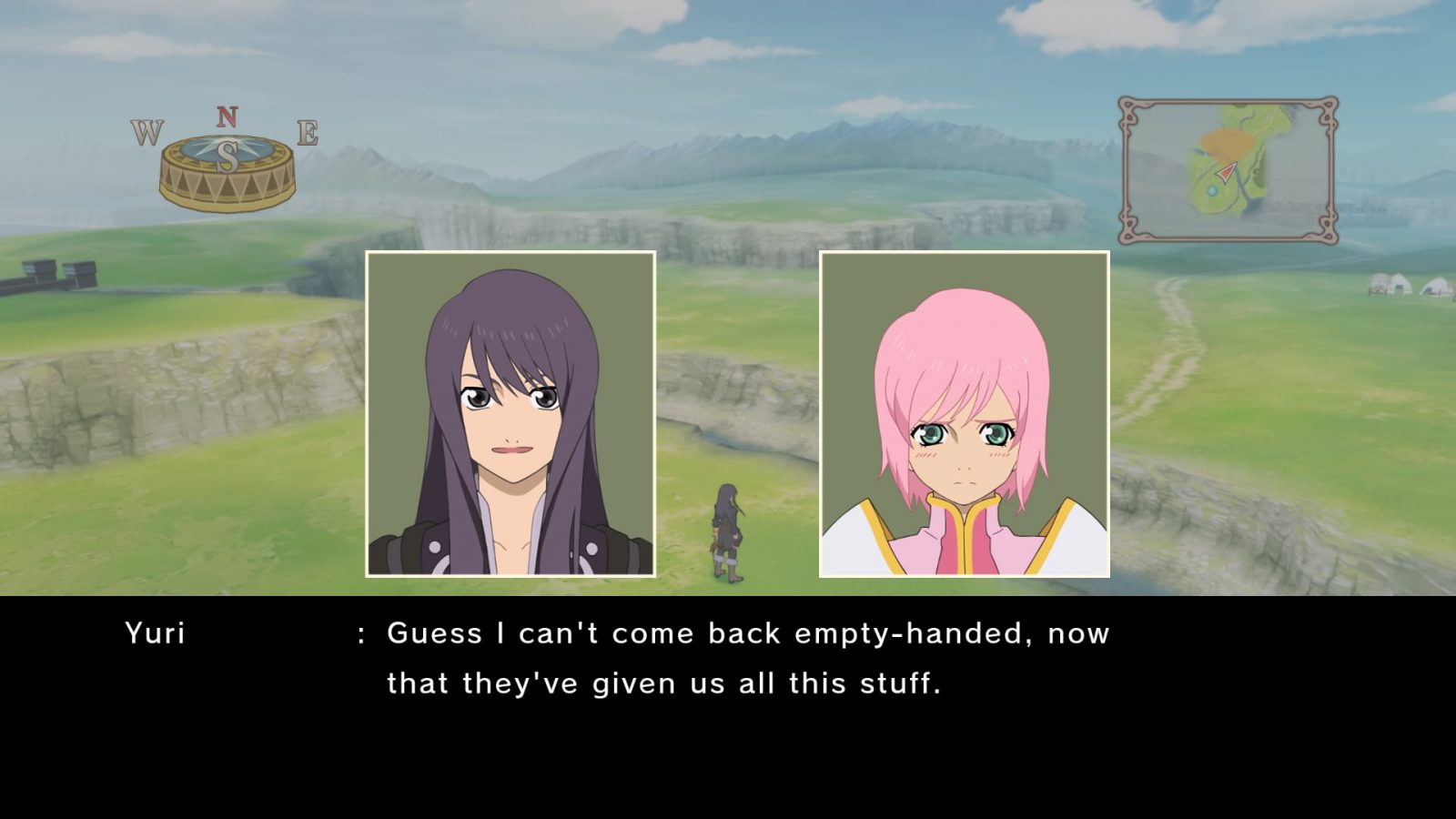 Outside of the fights, the game is pretty stunning, so much so that it really doesn’t look like a ten year old game. It’s really a testament to both the art style and the graphics remastering. I found myself stopping at the peak of a mountain and really looking out over the game world below and taking it in, which is something I don’t remember doing in a JRPG for a long time. Sure, if you look closely, Vesperia starts to show its age a bit, but the cel shaded art style really ages well, looking crisp and vibrant everywhere, from dungeon to mountain town to bustling city.
As you soldier on through the story, you’re introduced to Yuri, an ex knight turned aimless do gooder in pursuit of a missing blastia, the game’s materia-like MacGuffin, and the thief who stole it. Vesperia’s story proceeds in a traditional direction, a hero’s journey of small town boy in pursuit of a small goal, who eventually becomes central to nationwide politics and who, hopefully, prevents the end of the world.

In my experience, a JRPG doesn’t have much to stand on if its story and characters don’t deliver. In Vesperia, Namco Tales Studios definitely delivers, at least character wise. There is an interesting blend of traditional JRPG storytelling elements with more sophisticated character development. Sure, you have the hero’s journey, as mentioned above, and the traditional escalation to saving the world. And you also have the cast of kooky characters and hijinks along the way. You’ve got predictable character reveals (a regal looking girl? In a castle? What do you mean you’re the princess!?) and predictable betrayals. And while they might seem trite and cliche, Namco Tales Studios executes it well enough so that these predictable story elements are still cute and charming. 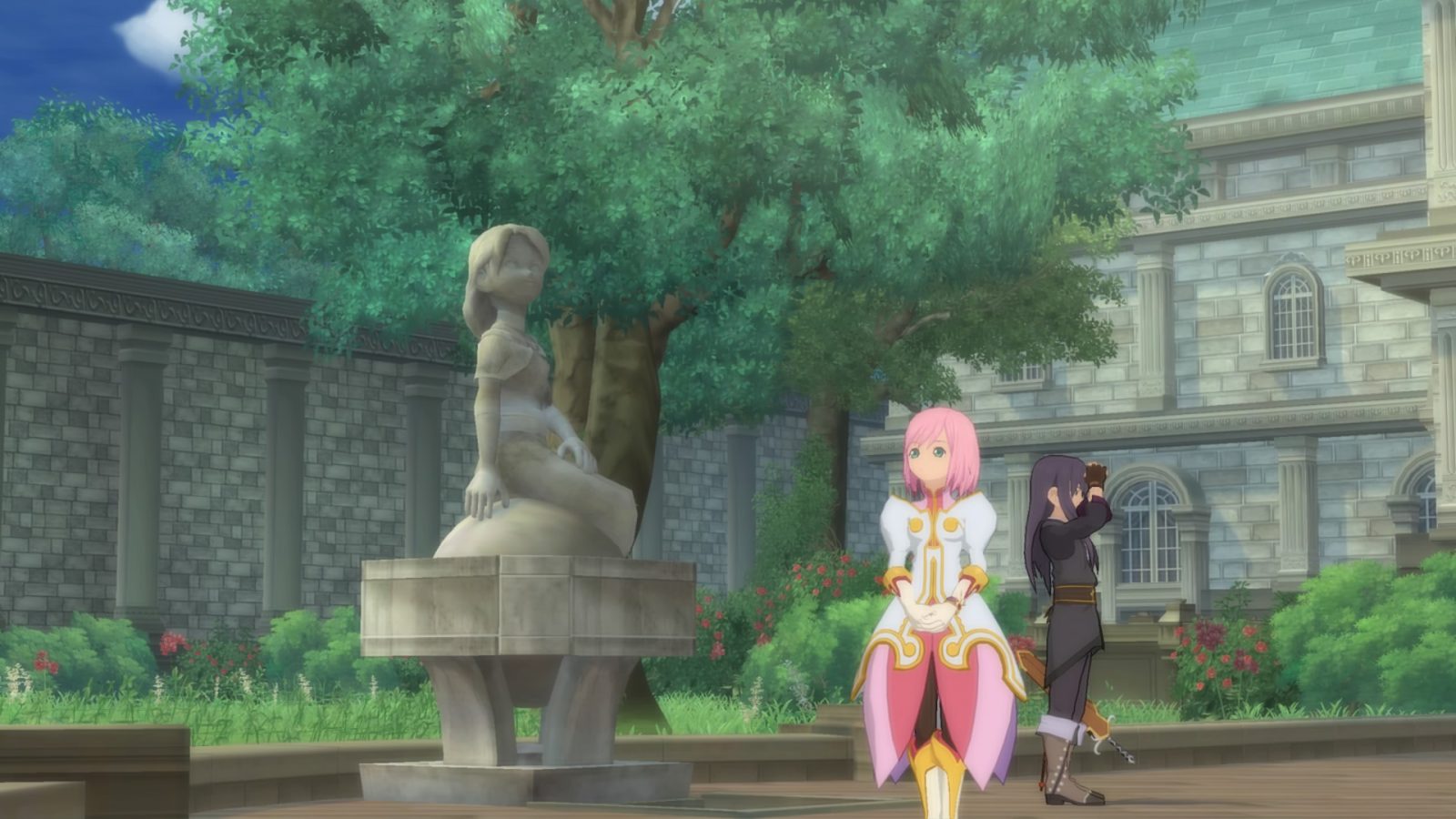 But where the storytelling differs from other JRPGs I’ve played, especially ten years ago when Vesperia was first released, is the nuance of the character development. First, there was a lot of it. Most of the character development was handled through “skits,” overlaid dialogue boxes with animated character portraits. The simplicity of the character portraits and spoken dialogue allows for numerous bite sized interactions between characters, without the need to bog down the game with cutscene after cutscene, while still allowing the player to follow the larger story in case you missed or skipped through these sections. However, I didn’t find myself skipping through these moments. In most RPGs, there’s always one or two annoying characters where I can’t wait to brush by their story moments, but I never found those characters or those moments during this game. 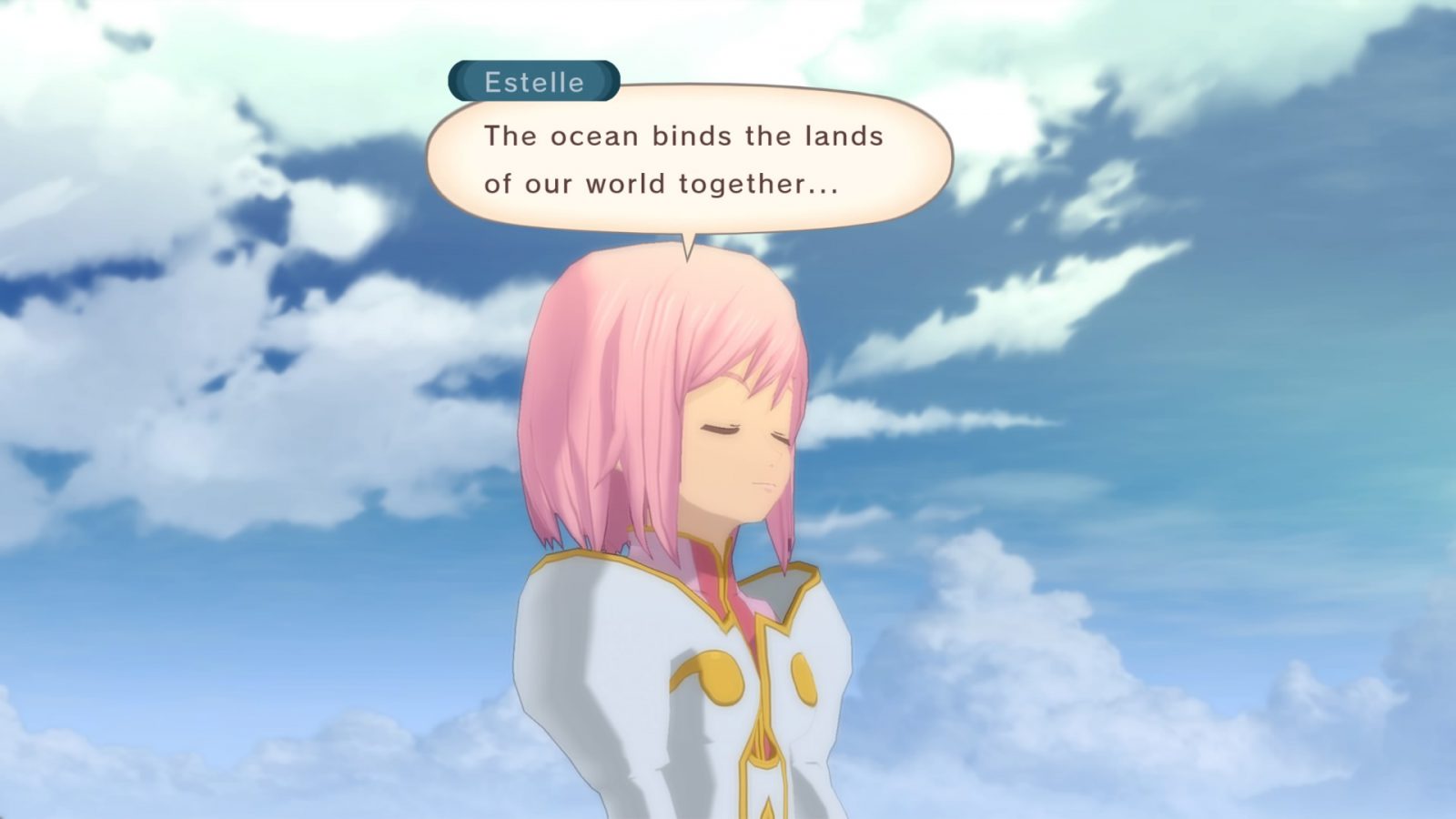 Namco does a good job of keeping their archetypal, and in many cases, stereotypical characters nuanced and interesting. This is most apparent with the main character, Yuri. He, and the rest of the party, have to deal with big, serious issues. They have to puzzle out the true meaning of justice and what is right in a world full of uncertainties. They have to figure out how to deal with corrupt authority figures, the fallout of ideological differences, and most of all, the real, sometimes negative consequences of their well intentioned actions.

The Definite Edition part of Tales of Vesperia boasts a load of additional content. New characters, additional main story, new side missions, areas, and bosses. Oh, and there’s a ton of character outfits and customization (I will admit to dressing Repede in the silliest outfits they had). Combined with the upscaled graphics, the Definite Edition delivers more than enough content to justify a repurchase of the game for old fans.

Tales of Vesperia: Definitive Edition is truly a love letter from Namco Tales Studios to fans of the franchise. While the main story is a touch trite and the combat a little dull, it’s worth it to accompany this cast of interesting and nuanced characters on their journey to save the day.

Like everyone else lucky enough to work at Gaming Trend, David is an avid gamer, and has fond memories playing Chopper Command on the Atari 2600. Since those fateful days, he's played a few more games and upgraded his hardware once or twice. Now he splits his time playing the Playstation 4 and PC, and when he's not in front of a screen playing a video game, he's in front of a screen working as a freelance writer and editor in Los Angeles, CA, and keeping his ear to the ground for an awesome D&D group.
Related Articles: Tales of Vesperia: Definitive Edition
Share
Tweet
Share
Submit