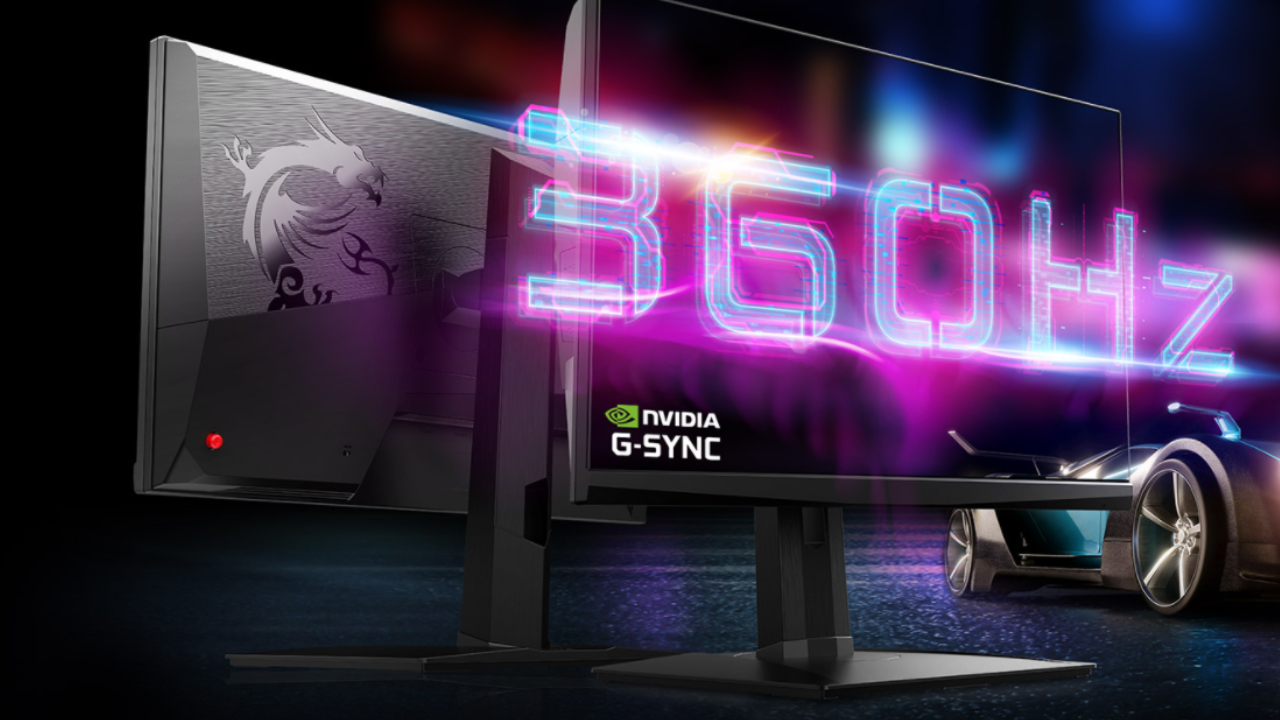 I recently built a machine for a friend. It has 32GB of memory, a 11900K processor, and an RTX 2080 Ti in it – a very powerful machine, if not bleeding edge. When I went to hook it up, I had to shake my head. “Is this a VGA cable?” tumbled from my mouth, incredulous that such a thing still exists. Quickly looking at the rear of the monitor I found an unoccupied HDMI port sitting there collecting dust. Moving up to HDMI suddenly enabled 1080p and 60Hz, but even then I found it hard to look at. Why? I have a pair of 144Hz monitors and there’s simply no going back. It got me thinking about the next iteration, 240Hz, as well as the newest monitors running at 1 GtG and 360Hz. Would I see the same transformational leap, and where is the cutoff? Nabbing a MSI Oculux NXG253R eSports monitor, I aimed to find out. But first, some homework – stick with me, you’ll understand why at the end.

Before we dive into the monitor’s specs, I want to touch base on a few technical terms that might be confusing. Let’s start with the basics – refresh rate. The refresh rate of your monitor is a combination of the speed at which your display updates the onscreen image, measured in milliseconds, and how many times per second the display is able to re-draw that image, measured in hertz. A display with a 60Hz refresh rate can draw that image and display it 60 times per second, a 144Hz monitor can handle that same image 144 times per second. The caveat being that you need a combination of hardware (GPU, CPU, motherboard lanes, fast storage, etc.) capable of feeding the monitor that quickly. Assuming you’ve got all the other gear, you’d obviously want that image to refresh as quickly as possible as it creates a cleaner image, free of any streaking effects as it’s displaying each and every frame image possible, resulting in the smoothest animations possible.

How color is displayed on a monitor is very important. We’ll use an LCD display as an example as they are the most common panel types. On an image that is 1920x1080 we have 1,920 pixels measuring from the left edge of the panel to the right, and 1,080 pixels from top to bottom. Each of these pixels contain three subpixels with a color filter able to display red, blue, and green. By turning these subpixels on and off, you can produce over 16 million different color variations. How fast that happens depends on a monitor’s response time.

Response time has nothing to do with how fast frames can be shown on the monitor, but actually describes the amount of time (again, in milliseconds) a monitor can go from a black pixel to a white pixel, and back again. There’s also a measurement we are seeing more frequently that is more descriptive of the mixed color seen in games – GtG, or gray-to-gray, which describes exactly what it sounds like. We’ll get into panel types in a second as it dramatically increases or decreases these numbers, but suffice it to say you want the lowest possible response time lest you end up with a ghosting effect as the monitor struggles to keep up with the rapidly changing colors in a scene. Samsung’s 23.5” CF396 curved monitor looks good on paper, but that 4ms response time might be a bit long. Similarly, Scepter sells a “Professional” thin monitor for the same price, but the response time on that is 8ms, which is frankly unacceptable. LG clocks in with a mid-range 144Hz refresh rate monitor, but the response rate on that is 5ms. In short, a high refresh rate only tells part of the story, and not even the most important part.

Speaking of color coverage, you might hear the term sRGB and wonder what that is. The NTSC (National Television System Committee) decided way back in 1954 that color should have a specific look on analog television, and that anyone broadcasting in America should adhere to it. Other countries also developed their own standard, but basically North America would have a picture made of 525 interlaced lines, and would be displayed at a rate of 29.97 frames per second. They also defined what the color gamut would be, with a specific range of colors that any TV manufacturer should be able to display. This standard endured all the way until 1996, when HP and Microsoft teamed up to create a similar standard of colors that would be displayed by digital electronics. That new standard is called sRGB or “Standard Red Green Blue”, and it defined the specific set of millions of colors that would be the gold standard for monitors all the way up to the launch of HDR, or “High Dynamic Range”. sRGB is represented as a percentage of the total 16 million+ colors in the standard that a device is capable of displaying. Many monitors and HDTVs boast a percentage in the high 90+%. HDR is just the next iteration of that, using 10-bit color gamut instead of 8-bit used in sRGB, giving us an even larger array of colors to more accurately present the image.

The final piece I want to touch on is G-Sync and Freesync. To understand either of those, you need to understand the concept of “screen tearing”. Screen tearing is when the framerate of the game you are playing and the monitor’s refresh rate come out of sync, resulting in an image that looks like it has a big slice through it where one half of the screen looks like it’s already rendering the next frame while the other half is still on the previous. This rolling and jitteriness of the image is jarring to the eye and an immersion breaker. NVIDIA debuted their G-Sync tech at BlizzCon back in 2015, using StarCraft II as an example, thus proving that this was not just solving a first person shooter problem. This video will show you the effects perfectly, so check it out:

NVIDIA G-SYNC: How It Works

The challenge, of course, is that G-Sync only applies to NVIDIA cards, so AMD (then ATI) came up with their own similar technology known as Freesync, usable with their Radeon series of cards. Put simply, match the monitor with the hardware you are using.

Ok, that’s a LOT of tech to know just to pick a monitor, right? Now we can talk about MSI’s 360Hz 1ms GtG G-Sync monitor and you’ll immediately know a whole lot about it just from that simple description.

The system I’ll be testing the MSI Oculux NXG253R on can only be described as absolutely obscene. An Intel 12th Gen 12900K with 32GB of DDR5 running at 6000Mhz, with a GeForce RTX 3090 handling graphics. It is, at the time of writing, the most powerful machine you can build, so the framerate question is fully answered – depending on the title, it’s more than capable of delivering a ridiculous amount of frames for the monitor to display. We’ve seen this same sort of setup deliver over 100fps at 8K resolutions in games like DOOM Eternal, Control, and Wolfenstein: New Blood with RTX enabled, so this 1080p monitor is going to get fed all the frames it can handle. Let’s talk about the use case for a 360Hz monitor.

If you are like my friend and coming from a 60Hz monitor, you’ll be able to spot the difference between the two immediately, and that’s no surprise. A 120Hz or 144Hz monitor makes it more challenging, with a 240Hz being almost imperceptibly different from a 360Hz one. Beyond what the naked eye can see, it’s also largely dependent on what kind of games you are playing. When 13 out of 15 of the most played games on Steam are eSports, there’s no doubt that there’s a market for high-refresh monitors. Unfortunately I don’t have a camera capable of capturing at 360 frames per second, but there is a remarkable difference in your ability to react in games like DOOM Eternal, Call of Duty: Vanguard, CS:GO, Apex Legends, Rocket League, and Halo Infinite – easily some of the best games out today, and very dependent on consistently high framerate to be competitive.

Admittedly, the more complex a game the less likely you are to push into framerates anywhere approaching the 360fps capabilities of the Oculux. My rig is obscene, with a 12900K, 32GB of DDR5, and an RTX 3090, so these framerate numbers will be less (sometimes far less) depending on your setup. Overwatch seems to be hard capped at 400fps, making it a good candidate to capitalize on the power of this monitor. Counter Strike: Global Offensive is over 800fps on average, so it’s ready for anything. Halo: Infinite wanders around 160fps. Call of Duty: Modern Warfare on the other hand gives the Oculux a workout, pushing 330fps directly into your eyeballs. It doesn’t make me any better at the game, but the frames are there for those who can take advantage. Apex Legends sees similar results, maxing out at 300fps, but dropping into the 270s on occasion. Rocket League maxes out at 250 (unless you want to hack away at .ini files). DOOM Eternal, especially with DLSS enabled and set to Maximum Performance, will see you playing in the 300fps range and then some. See for yourself:

The point is simple – for games that are well optimized to take advantage of every drop of power you can throw at it, resulting in framerates that are what some might call excessive, MSI’s Oculux eSports Gaming Monitor is awesome. It’s HDR presentation is second to none, and the GtG speed stands up to anything you can throw at it.

There are only a few things that give me pause with the Oculux, the first of which is that it’s only 24”. I’m sure there’s an eSports reason about not wanting your eyes to travel too far on a large monitor, but for the average gamer, or even a semi-pro, you probably want a little more real estate. The second is the resolution – it maxes out at 1080p. That said, at $469, it’s half the price of monitors with higher resolutions, but with half the refresh rate. Sure, you can grab a 4K monitor with 144Hz refresh rates for more than double the cost of this monitor, but for those who can take advantage of it, there’s no substitute for speed.

The MSI Oculux NXG253R eSports Gaming Monitor is a niche monitor for those with the best gear to play the fastest games with the best possible outcome. When every frame counts, a 360Hz refresh rate is going to make a huge difference. While the average Joe might not be able to take advantage, it’s awe inspiring to watch those that can. Frames make games, and nobody out there is throwing frames as fast as MSI.