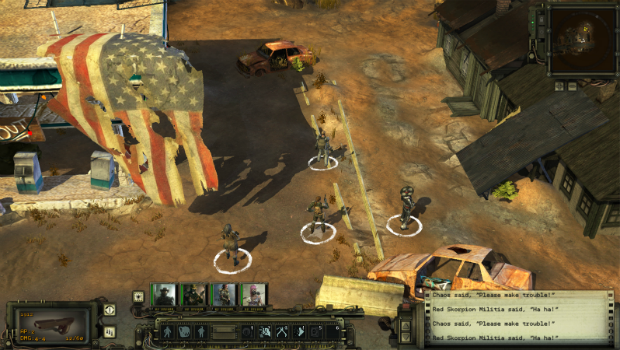 Usually when you think of the apocalyptic wastes from some of your favorite games, the mind travels to a place where great evil exists, delivering a snapshot of some brutal act you’ve committed in the aftermath of nuclear winter. Perhaps it is the nature of the setting, but even when the arc of your story bends towards justice, the wasteland can bring the worst out of you.

In Wasteland 2, the challenge is to abandon that desire to do bad and lead a more benevolent existence as a desert ranger.  Using a team dynamic, Wasteland 2 sends your squad into the wastes in an attempt to better the region and help the innocents from roving raider squads.  While the world in it may not be pretty anymore, Wasteland 2 is a magnificent game that hits on multiple levels.

Wasteland 2 starts with the funeral of a fellow ranger, Ace, who was ambushed while installing a needed piece of equipment for picking up a strange and threatening radio signal.  After a brief live-action cutscene showing some of the lead-up information as well as the scene at hand, the box is lowered and Ace is sent on to the great outpost in the sky.  This is where your team enters, a foursome of rookie Desert Rangers with oozing potential.  You’re asked to investigate the death of Ace as your first task, due to a overstretching of the more seasoned ranger teams.

Wasteland 2 demands you to follow questlines and complete set tasks, but along the way you will receive distress calls from settlements who need help.  The game doesn’t just allow you to put that call into a quest list and do it at your leisure.  You must drop what you are doing and go to help the distressed callers, as part of your duty as a Desert Ranger.  The penalties for failing in these duties are varied and can affect the game in a number of interesting ways.

Wasteland 2 has two main world experiences.  The first you come in contact with is a detailed view.  You are in the world itself, and can explore, interact, and do battle all on the same map, which cuts down on loading times and eliminates the need to shift from map to map.  The overworld map is less detailed, consisting of a badge marker to indicate your team.  You have very little knowledge of what is in the world at the start of the game, but as you travel from location to location you can discover new areas to explore, as well as the standard random encounters you’d expect with an RPG.  The overworld map uses water as a resource that measures how far you can explore before needing to return or find a water source, and you don’t want to find yourself over the limit.

Battling and exploring a location in Wasteland 2 uses a very classic RPG style that hardened gamers will recognize.  For the more casual or beginner RPG gamer, you can expect a gaming experience that meets halfway between the purely turn-based, static style that you’d see in a Final Fantasy-esque title and the free roaming, open-world style of a Fallout or Elder Scrolls type game.  It is a combination that is particularly potent in Wasteland 2.

The team members are able to view an area openly, and you can see the enemies ahead as long as they fall within your line of view.  This can allow you to plan your attacks better, and you always have the upper hand as long as the enemy has not spotted you.  Initial attacks will either fully destroy an enemy or start a battle.  Once a battle is initiated, a turn cycle is established and you are able to move each member of your team on a grid.  The game is very clear on how far you can move a character and still attack, and everything works very fluidly in terms of attacks, item usage, and target choice.  The only issue with the battles is that I can’t seem to undo a movement action if I make a mistake, but I could honestly be overlooking the option.  The game either won’t let you undo a mistake or has hidden the button to do so behind a blast door, and either way it is an annoyance, however slight.  Melee and ranged combat are both highly effective and work great, but ammo is a hot commodity, so you’ve got to learn to have a balance early.

The team members that you have all combine to form a sort of singular character that you’d expect from some of the more popular free world RPG titles of today.  While those games provide a single character who can literally do everything, Wasteland 2 provides you with four characters who are specialists, focused on tasks that they can handle and less so on those they aren’t familiar with.  You are able to select a preset character (that you can fully edit) or you can just build a character up from scratch.  You’ve got your basic attributes and skills you’d expect from a game like this, with measurables such as strength, luck, perception, and speed, and your survival skills such as proficiency with different gun types, exploration, lockpicking, and technological knowledge.

Creating your own characters gives you more control over how your squad works, but using the presets isn’t such a bad idea for having a specific character type you will need, such as a computer hacker or a infiltration specialist. Each game is going to be a completely different experience based on the party you choose, simply due to the access or restrictions you’ll have from the skills your party possesses.

Wasteland 2 is very open in terms of story and flow, and will almost always provide a unique experience based on your party choices, in-game decisions, interactions with certain groups, and success in handling problems for the citizens of your jurisdiction.  The indications of this are plastered all over the game from the very start, with certain paths becoming impossible to access, and choices you make reflecting themselves in the dialogue as the game progresses.  This is always a fantastic feature of a game, and with the already incredibly deep experience available in Wasteland 2, this makes the replay value almost immeasurable.  If you like this game, you could play it over and over and always find something new and interesting to explore and experience.

The look and feel of Wasteland 2 is very nice, and even on a low-spec computer like mine running the lowest possible quality of graphics, the experience was just fine. The character design is detailed and varied enough, with customization being available throughout.  The world design is well done, with fires burning, buildings lying in disrepair, and the rummaged remains of containers and dwellings cast aside by raiders and settlers alike.

The game does have a camera problem, however.  When in a dungeon, town, or settlement, the camera has these large obstructions all around the area shown, and it takes constant rotation to overcome this block of view.  The game also limits greatly the degree to which you can zoom out, so you spend a lot of time scrolling around a map to find a place to go, rather than being able to zoom out and view an area top-down all at once.  This is probably more “realistic” to limit your scope of view like this, but really all it does it make you have to scroll across the map slower and clunkier.

The music and sounds of Wasteland 2 are all appropriate and sound fine, if not cartoonish in some instances.  For the most part, the look and feel of Wasteland 2 is good but not great, so while there are problems to be had, it will rarely be an issue that ruins the otherwise excellent experience of playing Wasteland 2.

Wasteland 2 is an excellent update on a classic RPG experience, placing you squarely in the harshest of settings with a more benevolent role to play than most other “post-nuclear” game experiences with an excellent and open world exploration and battle system, as well as deep character customization and a dynamic, ever-changing story and world experience. While the game suffers from some look and feel issues and has a mostly abysmal camera, Wasteland 2 is still a great new title that can sate your desires for apocalyptic exploration for now.

Patrick Rost has been with Gaming Trend since 2013. At first focused on sports coverage, Patrick has gone on to cover a wide range of games and other products for the website. Outside of Gaming Trend, Patrick writes and records music, grinds perpetually in Elder Scrolls Online (PS4), and lives day to day with his two dogs, Bob and Stella.
Related Articles: Wasteland 2 Director's Cut
Share
Tweet
Share
Submit