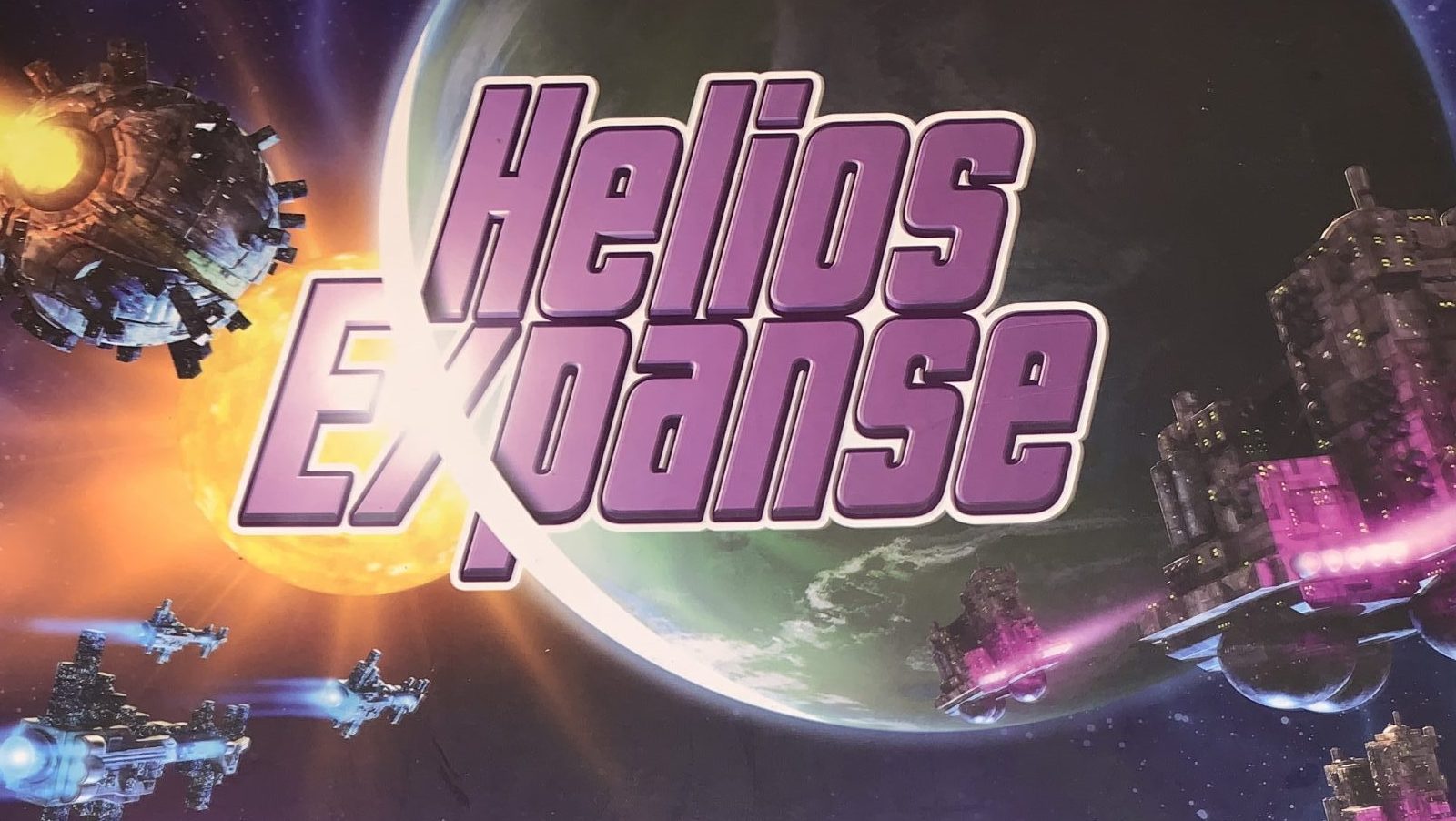 Helios Expanse is a game of conquest and strategy. Plan your moves, in secret or out in the open, but expect them to be changed. Keep your wits about you and pay attention to what others play, and you too can command the star system.  Gather up to 5 players and pick your favorite color to represent your ship and colonies.  The rulebook is quite extensive and can be overwhelming. Personally, I am not the one to sit and read all the instructions before I start to play, but with all the cards and parts you need to refer to the rulebook.  The instructions give each player’s space a particular organization; I find the common setup makes it easier to track the moves of other players. 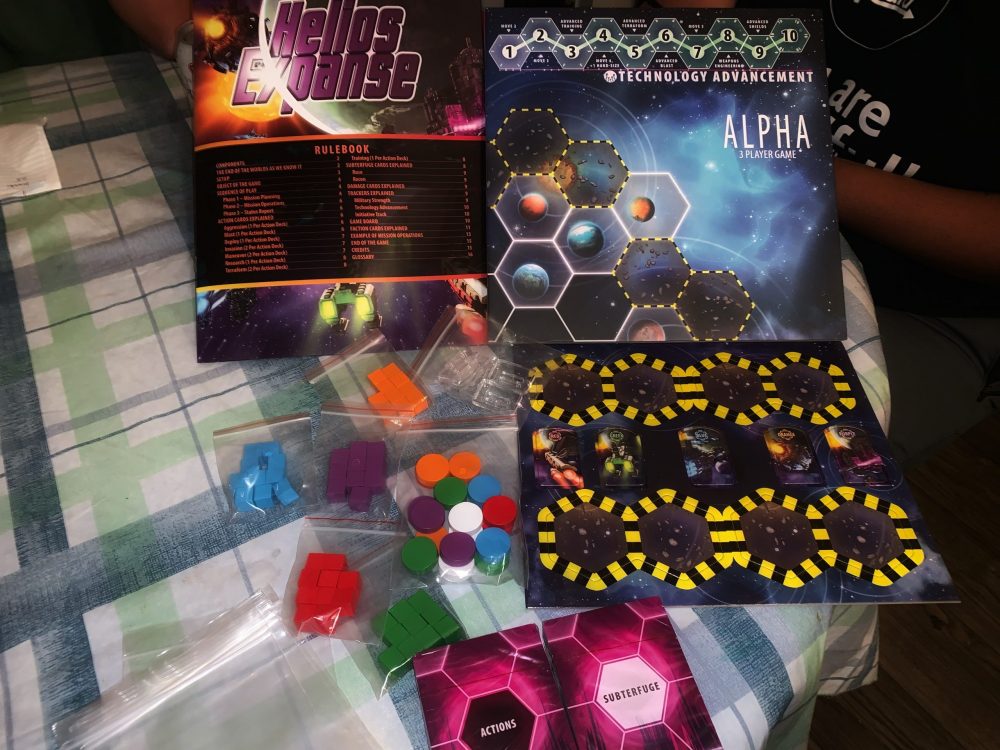 Everything included with the game. Markers, pop outs, folded double sided game board, and EXTRA bags to store it all.

The game is played in phases, and has a set number of 5 rounds. Mission Planning, Mission Operations, and Status Report.  Mission Planning happens one player at a time. There are 11 actions in your deck, they range from research, training, deployment, and colonization. You choose your action in turn order, one at a time, and you go around 5 times until all 5 of your actions are planned. You have 2 common bonus actions.  First is pull 3 more cards into your hand, so you have more options for actions. Second is to hide one of your actions and play it face down during Mission Planning. Here is where paying attention is a must! You have to track your actions and other player’s actions; depending on where they are compared to you, it can really affect whether your action is successful or a waste. It was quite a challenge to remember what I had planned and try to adjust based on what I saw my nearest rival just play. The next phase for the round is Mission Operations, where all of the actions are read out loud and players move accordingly. Here success is half planning, half luck for those who don’t have the keenest ability to remember their plays and track those of their opponents. Those lucky few who are good with that will find this game child’s play. The rest of us are happy to hone that skill through gameplay. The status report phase is cleaning up and resetting for the next round. Winning is easy; collect Victory Points for colonies, for the number of galaxies conquered, Military Supremacy, and even Technological Supremacy. 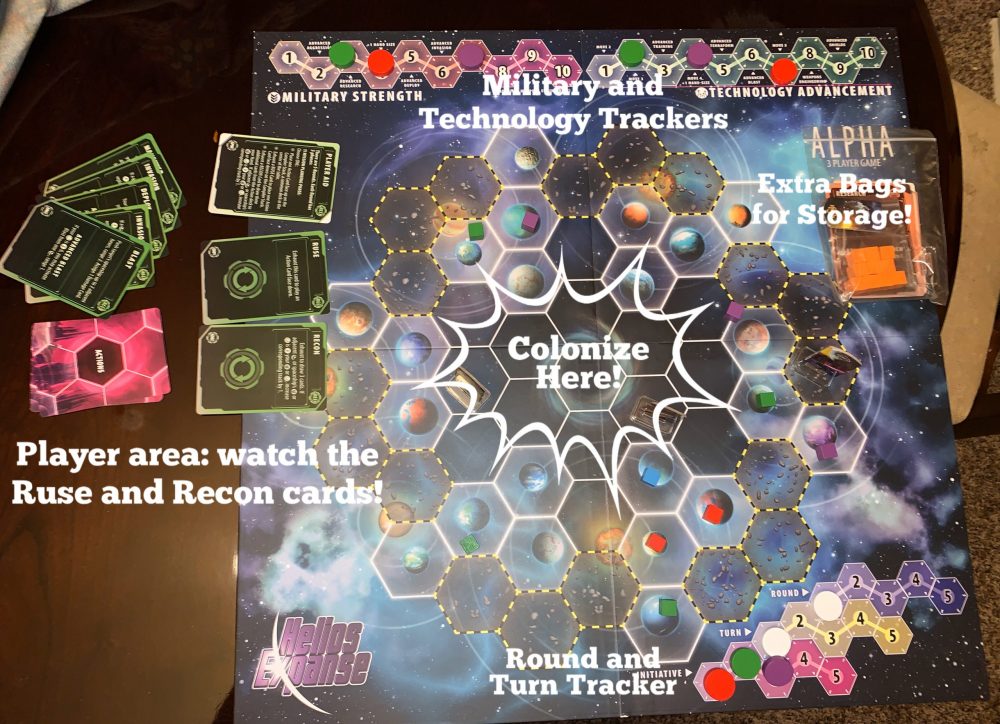 Layout of the galaxy. Everyone starts at the center black hole, move out to colonize, but watch out for the asteroid fields.

The factions make playing the game again and again a different experience each time. Each faction has a different strategy you can use to gain advantages with each move. Some focus on technological advancement, some hone military strength, while others deal in secrets. You can choose to play without the factions, as they become one more thing to keep track of in an already complex set of turns and rounds. Playing with or without the faction cards is fun and challenging, and stretches your ability to track the moves of other players.

Helios Expanse is beautifully put together, it has a lot of small pieces to track turns, colonies, military might, and technological advancement. Altogether the quality of game components are good. The cubes are symmetrical, disks shaped well, and the paint is vivid. The ships are of a thick cardboard, and their plastic bases are easy to attach. There are quite a few different color coded cards, so I felt that organizing everything by color was the best way to store the game for future play. Lucky for us, the game designers had the foresight to include extra baggies, and my need to organize was satisfied. The cards are standard card stock as gloss, so I don’t worry too much about them fraying or bending. Though I probably won’t let my kids shuffle or hold a hand, they’re too rough.

The rules and structure can be overwhelming, and I suggest playing along as you work through the rules, especially if you are like me and hate fishing through long rules.  While I love the quality of the instruction booklet, the rules and their explainations are wordy, and can be confusing for some aspects.   The Mars Faction card is overpowered!  Anyone who can pay a little bit of attention to their ingame military status is guaranteed to provoke the ire of every other player. My game group suggested we oust the card completely, but I said they just needed more games to hone their skills. I thought the game was captivating enough that I was willing to work out the rules, and exciting enough that I was ready to conquer the system again. The fact that it is limited to 5 rounds is awesome since it keeps this game quick enough to play through fully in a single session and leave time for other quick games in a game night.

Helios Expanse is a game of conquest and strategy. Plan your moves, in secret or out in the open, but expect them to be changed. Keep your wits about you and pay attention to what others play, and you too can command that star system.