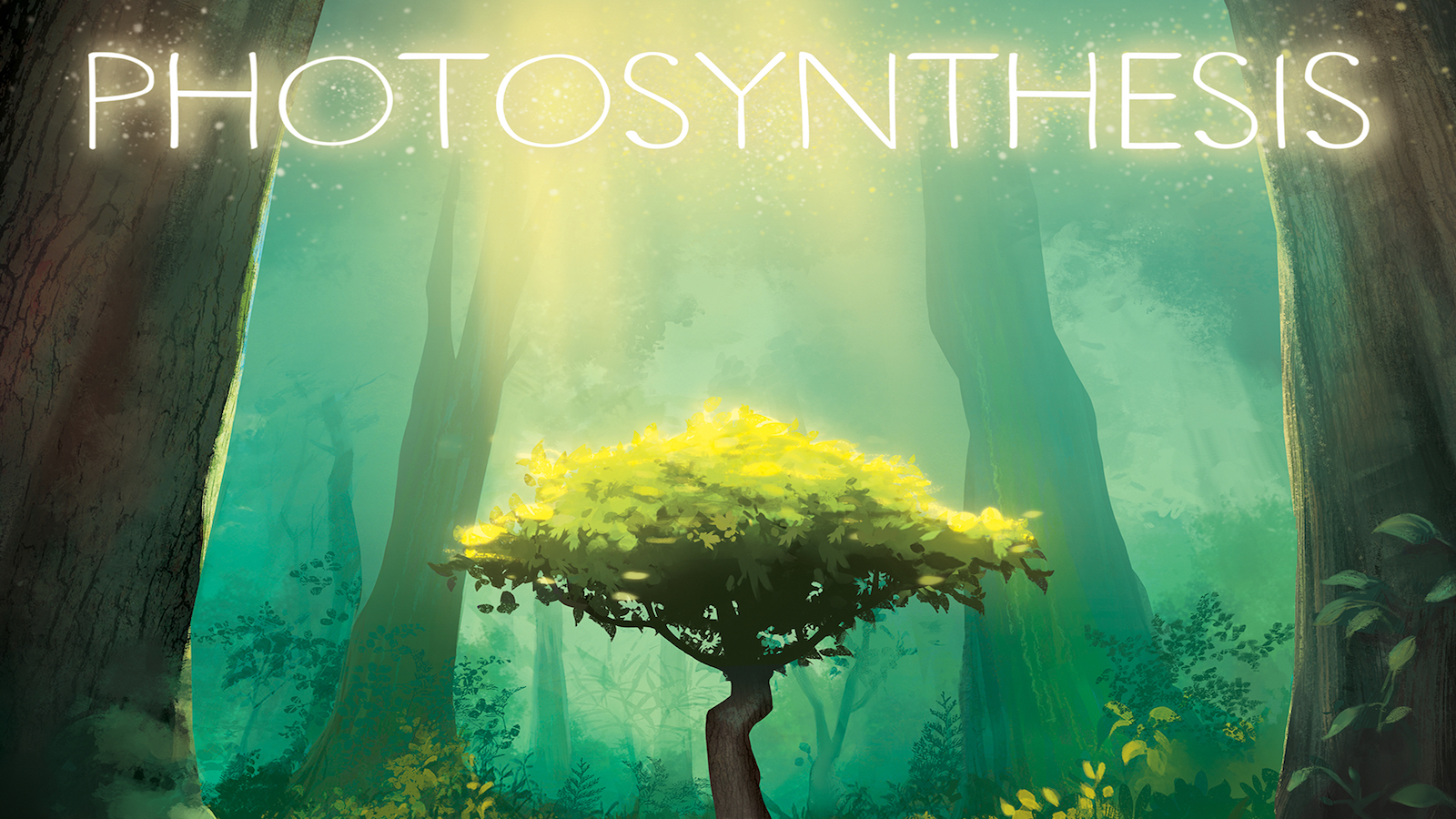 Blue Orange Games have made a solid reputation for themselves by producing several engaging family oriented games. They are particularly adept at games with an educational slant, such as their fun pattern maker, Dr. Eureka. I could easily argue that all board games have an inherent educational value of problem solving, but Blue Orange has produced some titles meant for kids to play and learn. One of their newest games, Photosynthesis, is a bit heftier than their usual fare, but it follows Blue Orange’s winning plan of blending fun with learning.

Photosynthesis is all about using light as a resource to grow trees and score points based on how deep in the forest your trees mature. Watching something grow may have the same excitement level as watching paint dry, but don’t let the theme fool; this is not a boring science lesson.
You are given a tableau with a grid for keeping track of your light points and a staging area for seeds and trees of small, medium, and full grown heights. You also have seeds and trees from off the board that are available at the beginning of the game.

The value of the land (marked by leaved) increases the closer you get to the center of the forest.

The board is set up in a hexagonal shape with circular spots for trees to be planted within it. Circles along the edge of the hexagon contain one leaf inside them and the number of leaves increases to a maximum of four once you get into the heart of the woods. Victory comes from growing and then collecting mature trees. You gain points from drawing tiles that correspond to the number of leaves in the tree’s planting circle. The more leaves in the circle, the better the point value of the tile you’ll draw. The concept is straightforward and young players will have no problem understanding what to do.

You’ll begin by placing two small trees anywhere along the outer edge of the board illustrated by fertile land encompassed by flowing streams. You’ll then collect light points based on how much sunlight your trees can collect that turn. A crescent sun is placed around the edge of the board and rotates to a new corner of the hexagon each turn. On any given turn, the sun’s rays reach out in straight lines to hit the trees. Trees collect various amounts of light points based on how tall they are. Trees also have a shadow zone that blocks light from reaching areas behind them. The taller the tree, the longer that shadow is, and even a mature tree can be blocked from sunlight should another mature tree be blocking the sun’s path.

Since the sun moves each turn, your accumulated light points may fluctuate. This is a really clever system that forces you to balance pushing towards the center for maximum points while maintaining a presence along the edge to gain light points. I attempted an early strategy of pushing toward the highest valued circles early, only to see my lack of light point accumulation thwart my progress.

Collecting light points is determined by the height of your trees and whether they are in the shade of other trees.

You have several options you can choose from every turn, each of which will need light points to execute. You can increase the size of your trees currently on the board from small to medium, medium to full-grown, or collect full-grown to score victory points. The cost to do this rises as the tree grows. Your trees can also spread seeds so you can grow new trees. This becomes very tactical as you move to score points or potentially block light from other players. In another sharp feature, the distance you can spread seeds is determined by the height of your tree. The saplings can move seeds a mere space, but the mightiest trees can blow a seed three spaces, which behooves you to keep your mature trees around awhile before scoring them so you can maintain maneuverability. Positioning is a constant battle in this game.

I would be remiss if I didn’t mention how great the game looks once players have placed trees around the board. The game plays well with any level of its two to four suggestion, but the game begins to look like an autumnal drive through the forest with three or four players.

The beautiful board shouldn’t absorb all your attention. You’ll also have to keep an eye on your tableau as you play as well. Trees and seeds must be readied before they can be used to plant and grow. Light points are used to move them from your board to the side, at which point they can be used on the main board. This is where the game requires some planning. You can never make more than one move with any seed or tree in the same round. There’s no jumping to a space and growing a seed to a mighty giant in a single turn. Nature takes time, and you’ll need to have things ready for when you decide to grow or spread out. You’ll also only have two mature trees at any one time on the board. Simply sitting in the lone space with four leaves and expecting to win won’t cut it. You’ll have to score, and quickly put yourself in position to score again by having constant growth of young, middle, and older trees.

The game’s vibrant colors really stand out as the forest grows.

Yes, there is a bit of sameness with the game. There’s a mad dash for those coveted scoring areas, as well as the race near the game’s end to pluck mature trees from the board. You will rinse and repeat with each game. The replayability comes in your gaming group and how each player strategizes on how to jockey for spots on the board.

This all adds up to a game that is much more strategic and involved than you might think.
Still, the game has an interesting way of making sure that you take care to balance light production and tree growth. You are constantly figuring out how to maximize your production through each angle of the sun’s rays while also deciding the right moment to pluck your tallest trees for points. As such, younger gamers may need time to understand some of the game’s nuances. Additionally, the game can be cutthroat as players vie for spaces to score and light to gain. Caution should be taken with younger audiences, unless your goal is to show your child how cruel the world can be. This is easily outweighed by the fact that game is very enjoyable and has a flow which feels as natural as the theme it portrays.

Photosynthesis takes a basic science concept and turns it into an engaging tactical game. Positioning and planning both play a big part in your success. As you play, your board explodes in vibrantly colored trees that hide what can be a vicious game for prime real estate. Accessible enough for kids, Photosynthesis provides enough meat to entertain and challenge all ages.