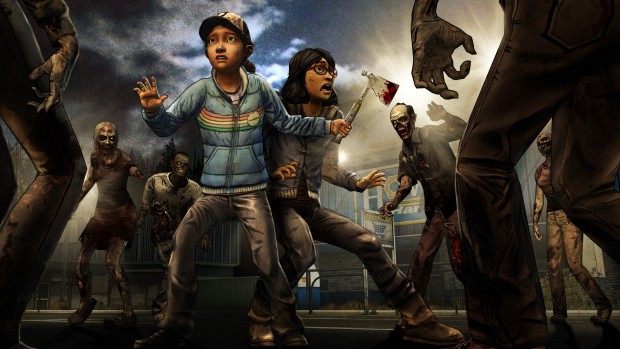 Something about Season 2 of The Walking Dead left me wanting. Maybe it’s the lack of that fresh feeling of a breakthrough experience. Maybe it’s the sophomore hangover after Telltale delivered the consensus Game of the Year in 2012. Maybe it’s the conclusion that failed to provide the unflagging desire to see what happens next. Whatever it was, each episode nevertheless engaged me from start to finish, and while Season 2 might not deliver the same sense of wonder that the first did, it’s still a stirring and well-acted journey worth taking.

The conclusion of the first season of The Walking Dead left jaws hanging across the industry, with the main character dead and little Clementine left to fend for herself. Season 2 picks up shortly after, putting the player in control of Clementine as she sets her sights on survival. Separated from everyone, the first moments are spent with no human companion to lean on. These initial scenes do a good job of cleansing the palate, setting the stage for brand new characters to join the fray.

Those new characters give the best performances that this franchise has seen yet. Each newcomer, from Scott Porter as Luke to Shay Moore as Rebecca, lends a strong, convincing voice to his or her respective role, so much so that the performances of the numerous returning characters are occasionally exposed as being weaker in comparison (if only slightly). Michael Madsen in particular does an outstanding job as the vicious-yet-relatable William Carver in episodes 2 and 3, and if anything, this season could have used more of his intense antagonism. Overall, the combined cast does a terrific job of conveying the story from beginning to end.

Even among all of the excellent newcomers, Clementine thrives in the spotlight. The Walking Dead’s strongest suit is the freedom it provides to let the player steer the outcome of the game and its characters, and this is strongest and most important in the case of Clementine. Through the course of five episodes, she goes from a floundering young girl to not only someone who commands respect from her companions, but a strong-willed peer that is counted on for the good of the group. Depending on your decisions, there are moments where she can seem all-business, even to the point of cold blood. Sitting in the driver’s seat for the transformation was a thrill, especially in the first few episodes.

As with the preceding season, the dialogue sequences in The Walking Dead Season 2 are front and center. When engaged in conversation with other characters, you’re typically left with four options to respond with when it’s your turn to speak. This might sound like typical adventure-game fare, but Telltale’s series adds important twists. You’re only going to get the chance to pick one response, so choose carefully. It’s not like you can click through every option until there’s nothing left to ask about — as is often the case elsewhere in the genre. You don’t even have to say anything at all, as silence itself is a viable response to a question or remark. But most importantly, you’re timed. You can’t mull over your response, weighing the pros and cons of each choice until you’ve decided which one is optimal. You need to choose quickly, and the amount of time you have is dependent on the intensity of the situation. This dynamic defines the series and is the real source of tension throughout. It’s not rare to be forced to make a quick decision and spend a lot of time wondering if you might have made the wrong choice while under the gun — but you’re stuck with it.

If playing with the default Standard UI configuration, the game can be a bit overbearing in its contextual prompts during conversations. If you respond to a particularly poignant question that will affect the outcome of the story, a line of text in the upper part of the screen tells you outright. It’s both distracting and disappointing, as it exposes the rest of that conversation as being virtually meaningless from a gameplay standpoint. I’d much rather be left wondering about an entire dialogue between two characters than to come away knowing that only one statement actually mattered in the long run. Fortunately, a Minimal UI option exists which does away with these prompts, allowing the much-needed mystery to flourish.

Hope you like QTEs, because you’ll be seeing a lot of them

Beyond dialogue, there’s a noticeable lack of interaction in The Walking Dead Season 2. The game consists mostly of taking part in a conversation, watching a cutscene, participating in a quick time event, and then engaging in another conversation. Opportunities to walk around and explore settings are few and far between, so it’s difficult to feel engrossed in the environment, and the aforementioned quick time events are little more than devices to vary the pacing a bit — certainly not notable action sequences.

The dialogue is strong enough to carry the game through these drawbacks, but the writing isn’t as consistent as it was in the first season. Guiding Clementine and her companions through Carver’s iron-handed camp was especially thrilling, but the season slowed down considerably after that particular episode came to an end. There wasn’t much development left for Clementine’s character, and a lot of the remaining action consisted of a series of bad events to wade through with less context as it continued. The final episode offered a tear-jerking call back to the first season, but the ultimate conclusion didn’t grab me like the original season’s closing moments did.

The episodic format also didn’t do the series any favors. With at least one month between the release of each two-hour portion, it’s easy to lose any emotional connection to the story and forget details prior to starting a new episode. It makes the narrative feel disjointed and less effective. Those that haven’t played through the season yet are the lucky ones, as the experience would be undoubtedly better over several days rather than several months.

Despite these gripes, none of them are enough to keep the experience from greatness. Clementine’s story is still strong enough to carry the game through its interactive shortcomings and slow-going moments. The novelty of the episodic format might be wearing off, but the quality of the product underneath still shines through. Season 2 is not another universally recommendable standard-setter, but it’s damn near a must-play for adventure gaming diehards. At the end of the day, Telltale Games have shown us that there’s still plenty of gas left in the tank of The Walking Dead.

The Walking Dead Season 2's gripping tale of growing up in a hostile environment might not be the instant classic that Season 1 was, but it still belongs in the library of any adventure game fan.