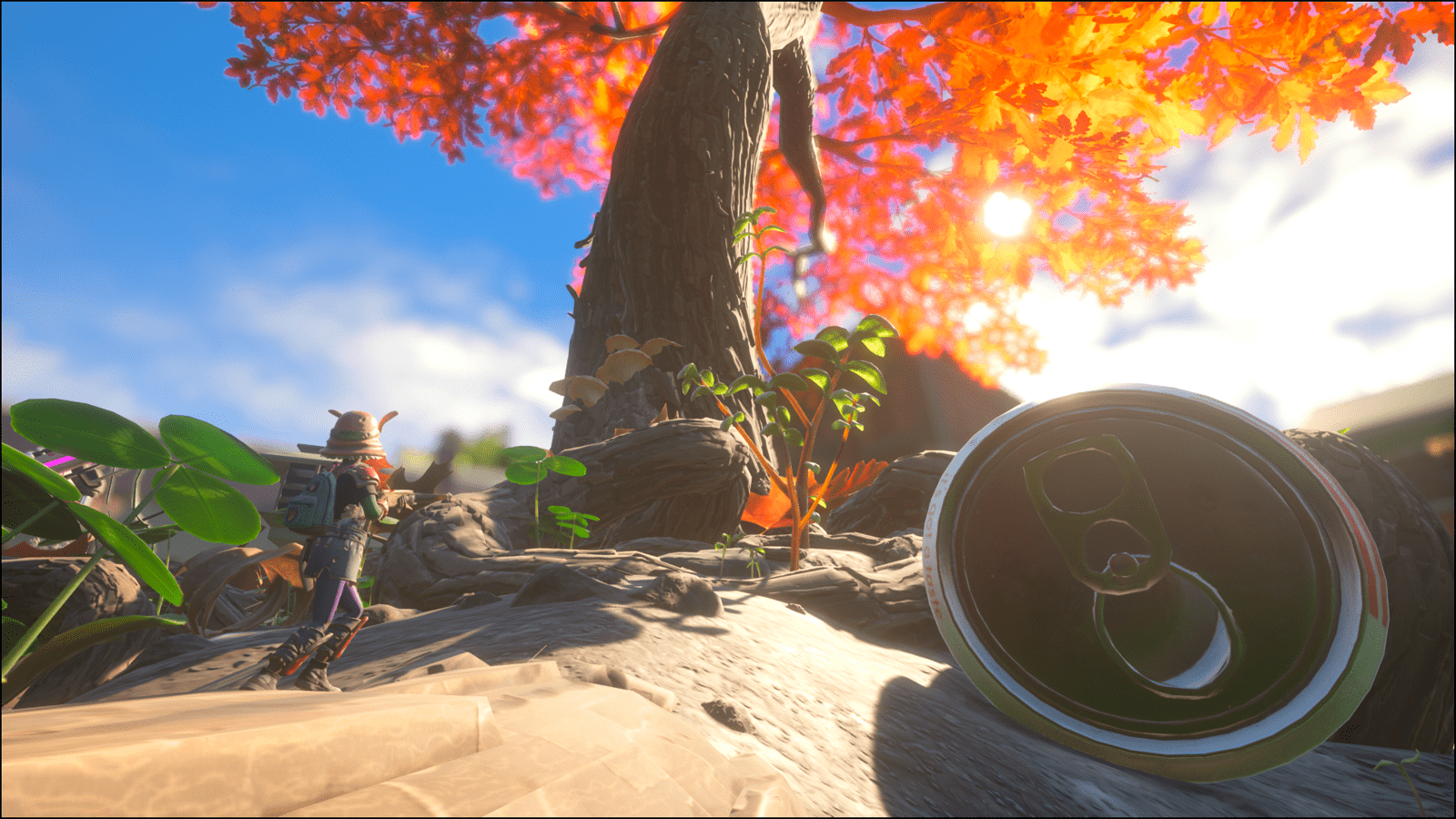 Four kids have found themselves mysteriously shrunk down to the size of an ant and are thrust into a fight for their survival within the dangerous landscape of a backyard. With no memory of how they ended up in the yard, it’s up to them to figure out how to return back to normal size without ending up as bug lunch.

After spending a long period in early access, Grounded has released their 1.0 update granting players a proper full launch. This update brings with it a host of new improvements including crafting recipes, enemies, areas and most notably a conclusion to the story. This means that on top of the survival and creative modes of the game preview, there is now also a full campaign to experience alone or with friends. 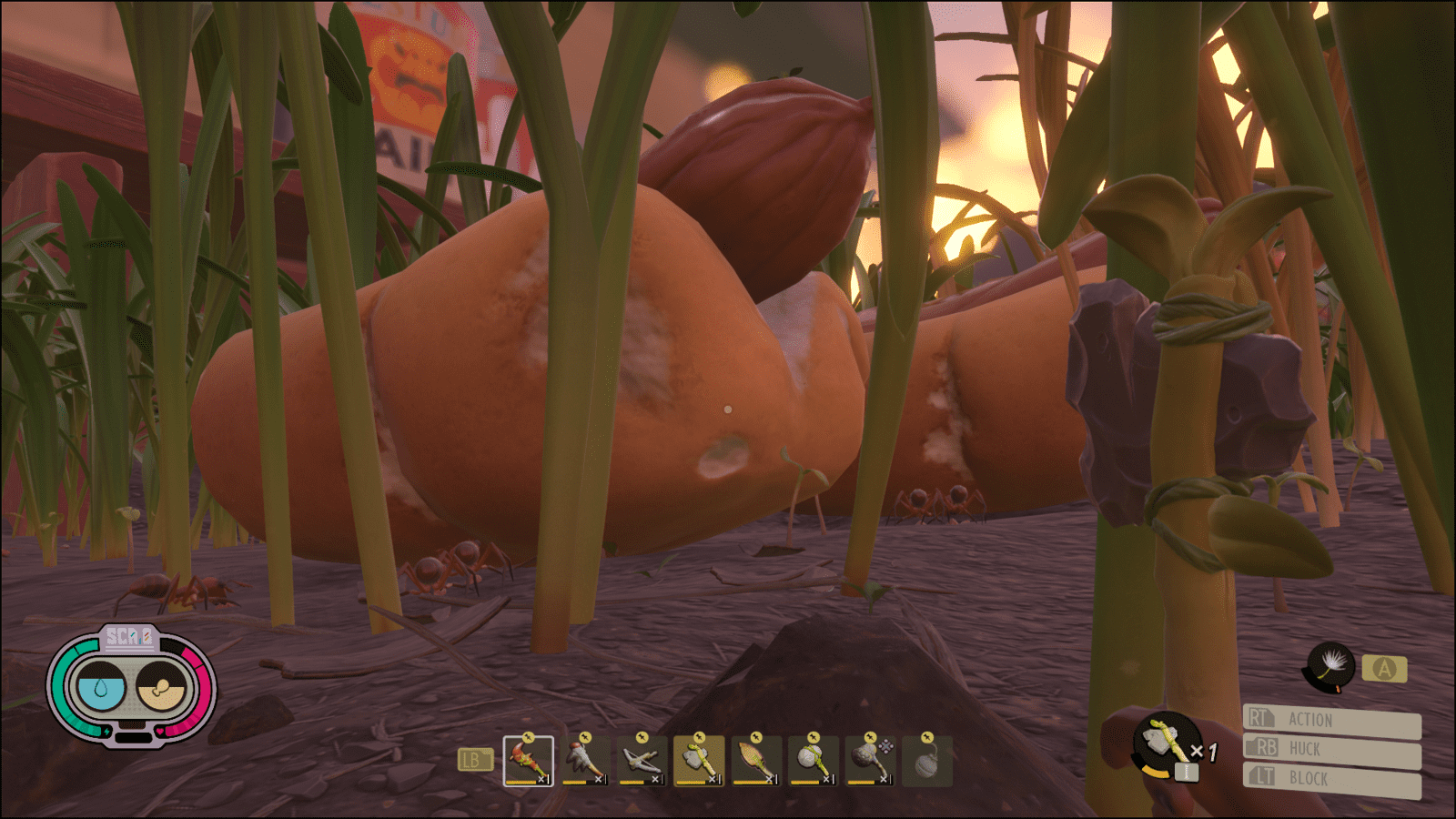 While surviving alone can be fun in its own right, romping through the grass with friends is even better. Grounded makes it easy to set up a multiplayer game, and even includes options to have a shared world, meaning that anyone in your group can host the world even while you’re offline. Whichever you decide, the game gives plenty of options to customize your save file. These modifiers apply to more than just difficulty, allowing players to change settings like bug spawns, player damage, or even turn off the questline. There are a lot of custom options to tailor the experience to how you want to play.

The environment and setting is the true selling point of Grounded, taking place entirely within the landscape of a backyard. A sandbox becomes like a sun scorched desert, ant-hills transform into vast expanses of cave networks, a koi pond resembles a bottomless lake; all of the vistas here are simply breathtaking. Everyday scenery becomes new again from a tiny perspective, and I always wanted to find more to explore. Grounded gives players the opportunity to check out every blade of grass and turn over every pebble for secrets as they follow the main storyline or embark off the path at their own pace. 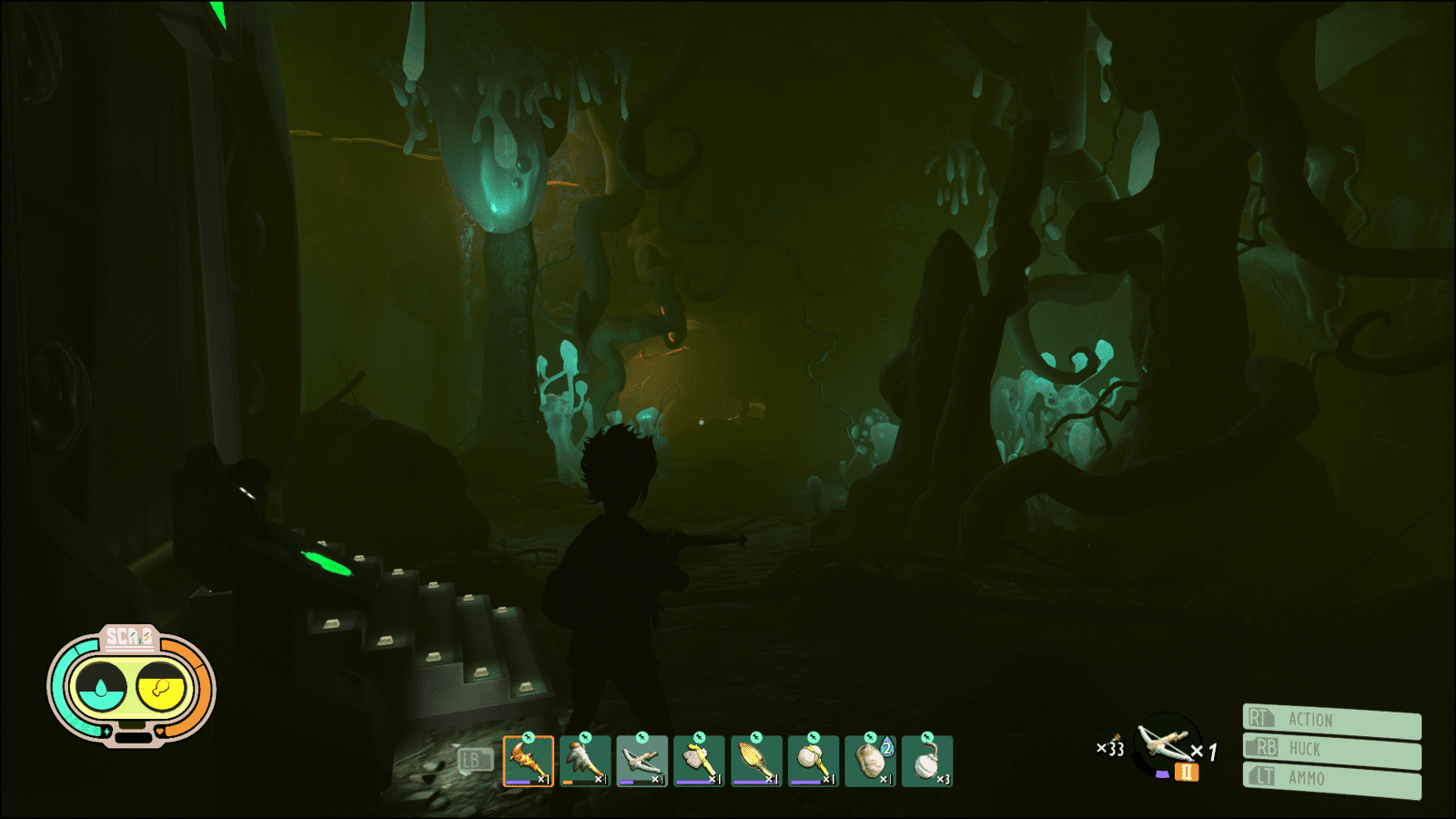 Base building and crafting are a staple of the survival genre, and Grounded knocks these concepts out of the park. Whether you’re creating a simple tool or building intricate armor, the workbench is a one stop shop that displays all the information in a neat fashion. Workbench recipes can also be filtered and sorted through, which is helpful given the staggering number of items and building materials that can be constructed. Base building is in a blueprint style, meaning that all of the outlines can be laid out the way you want them before you even place the first piece. This was extremely helpful for planning out exactly how I wanted my buildings to look and function, and also made it so that my allies could help construct any plans I had already laid out by simply adding materials. Items can also be constructed in a free flow manner for a natural feel, or with snap-grid for perfect fits. I found myself using a blend of both to get my tiny sanctuary constructed to my liking, and I always wanted to come back to add more and more. The only restricting factor is your imagination, and I appreciate that Grounded lets players build conservatively or go all out if they choose to. 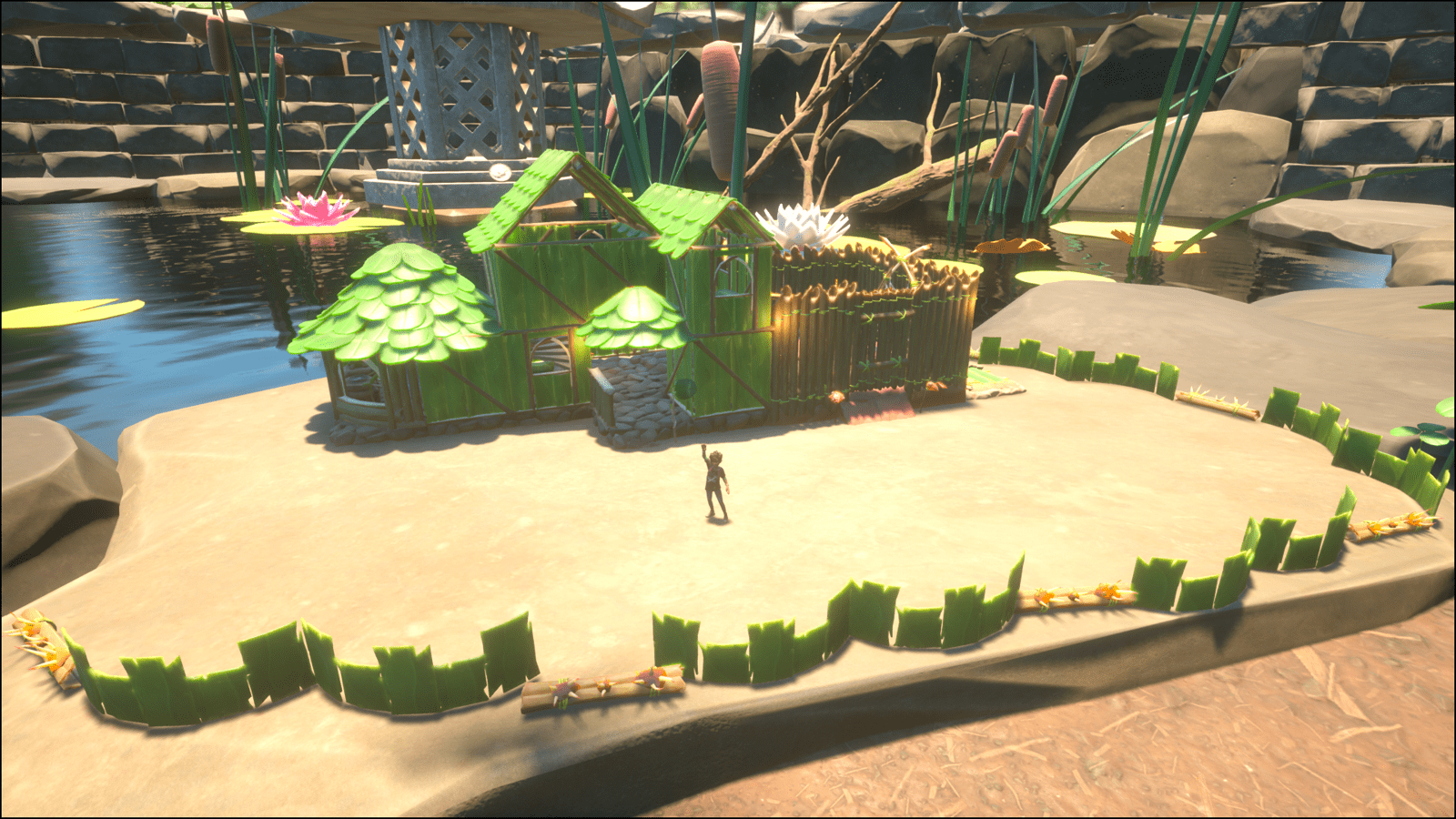 The survival aspect of the game is a crucial part of the experience, with most enemy insects providing a formidable challenge. Sure, the small bugs like the mite or weevil will easily fall prey to your attacks, but to the larger creatures like spiders and beetles, you become the prey. Many of these foes will defeat you in three hits or less, with the horrifying wolf spider capable of dealing a killing blow in one bite. There were times when the foes seemed insurmountable, and it can be frustrating when you get smashed or devoured over and over, but for me that just makes it all the more satisfying when I finally overcome the odds. Even so, I think the difficulty tuning could be adjusted down for a single player experience just a bit. Although the challenge is certainly made easier with friends, each battle still feels like a fierce fight for survival against a massive enemy.

One of the more notable additions to the full release of the game is the improved rollout of storyline, which is now a full campaign complete with cutscenes, recordings, notes and more. The mystery of the shrinking machine and the scientist behind it was enjoyable to unravel, and exploring the hidden labs sprinkled throughout the yard provided an interesting departure from the more nature-filled environments. It’s hard to discuss the narrative in too much detail without giving away enjoyable discoveries, but I can say that I enjoyed tracking down leads and unfurling the mind and machines of the scientist. 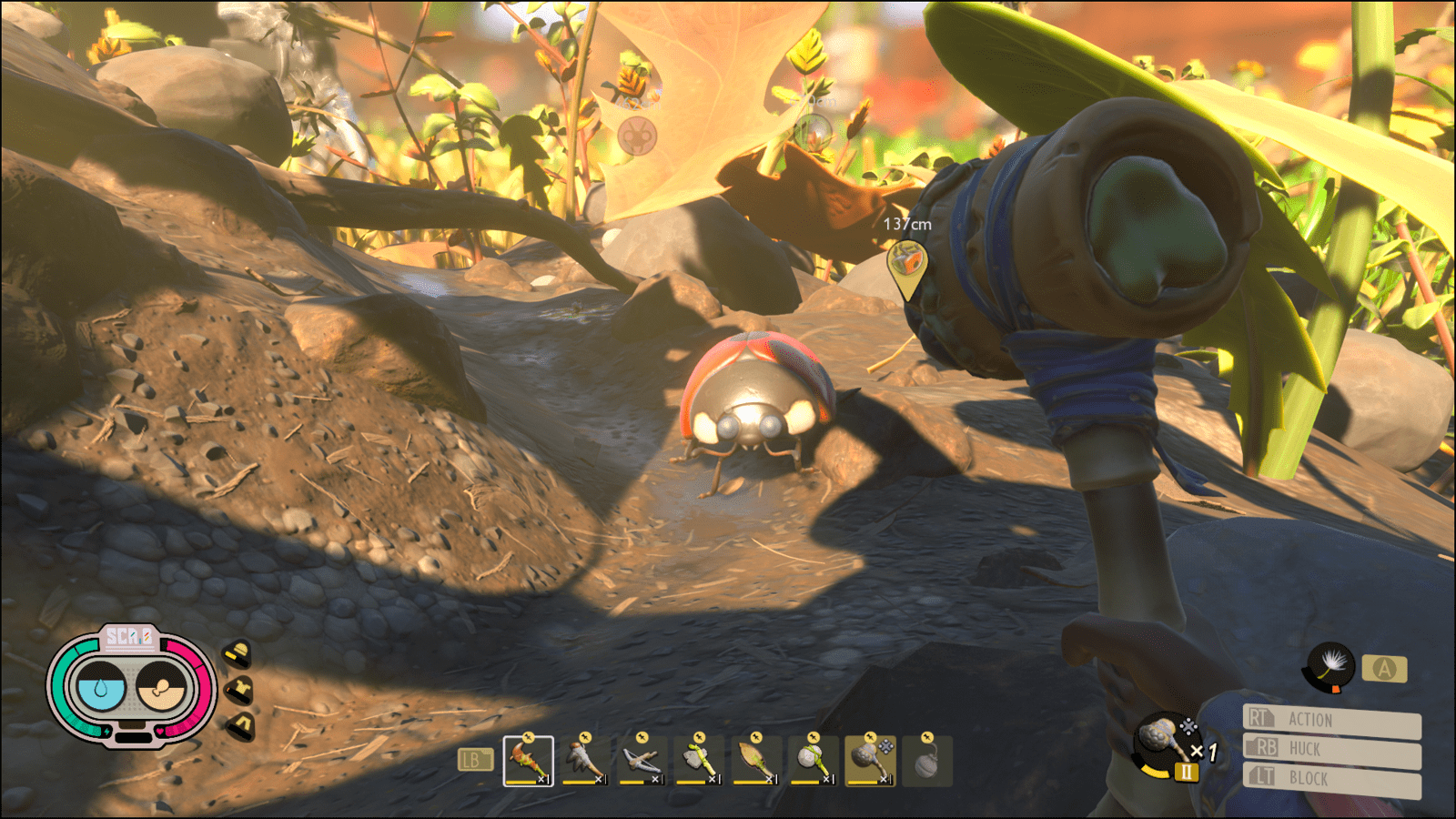 This update ensures that Grounded now feels and plays like a complete experience, which has been a long time coming for fans of the preview build. Whether you’re making friends with the local fauna or waging war against the wolf spiders, delving into the backyard is sure to fill you with a child-like sense of wonder.

Grounded provides a survival experience unlike any other within its genre. Carving out a place to survive within the tiny realm of the backyard is rewarding, and exploring the world from a new perspective is amusing. With the release of the full game, Grounded now feels like a complete experience worthy of its fans’ expectations.

Corvo is a writer who loves to explore journalism through video games. Writing and editing reviews for triple-A games and indies alike, he finds his passion within expressing his experiences in a fair and accurate manner. Some of Corvo's favorite games are Destiny 2, Mass Effect, and Disco Elysium.
Related Articles: Grounded
Share
Tweet
Share
Submit