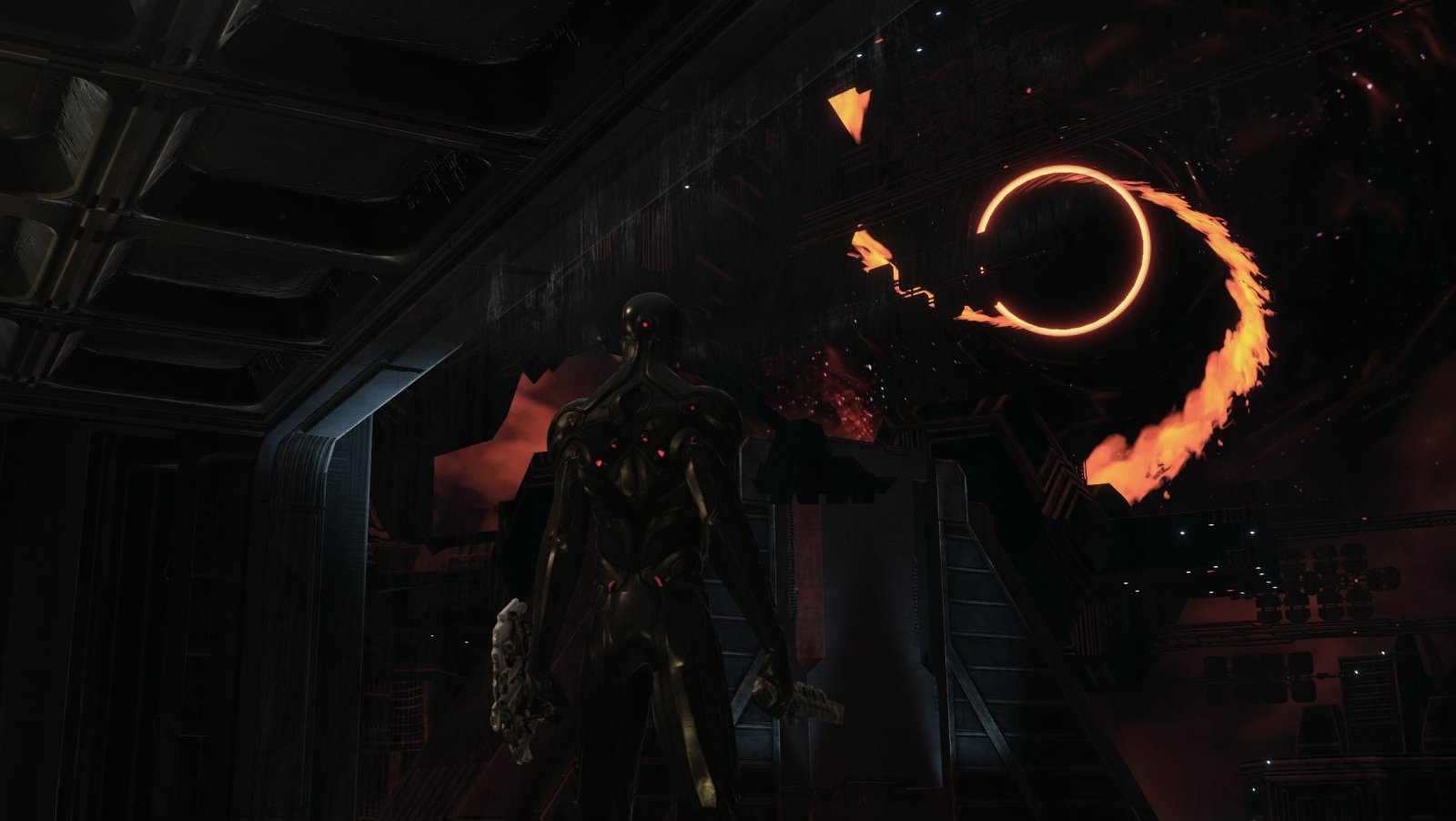 I really like the Souls series. I’ve played and beaten everything from Demon Souls to Bloodborne. I love the series so much that I tend to be harsh towards other Souls-likes. I find most of them derivative and lacking any originality. Thankfully, I can’t say this about Hellpoint. Hellpoint changes enough of the Souls formula to make it feel different. It has issues, but this is a quality game for anyone looking to scratch that Dark Souls itch.

You explore, level up, die, and explore again until you get a bit further than you did last time. Maybe you shout at the monitor because you swear you dodged that attack. Normal Souls-like things. Combat is based on stamina, equipment has a weight system so heavy armor slows you down, and you rest at certain areas to recover health which also respawns enemies. Normally, I find this familiarity breeds contempt as no game does this formula anywhere near as good as FromSoftware. With Hellpoint, however, I find it comforting because it does a lot of strange things with formula. Some deviations I enjoy. Some I do not. 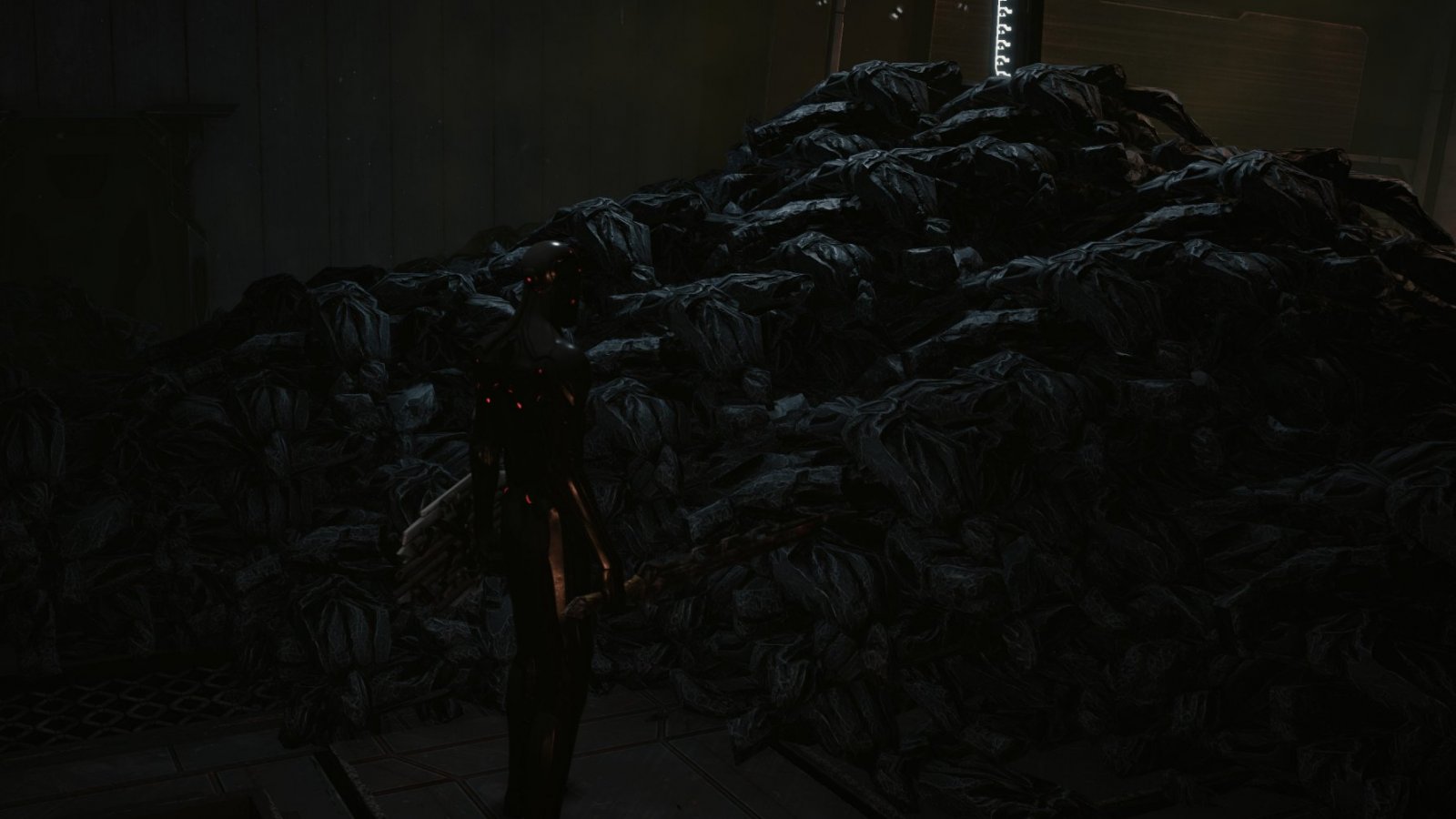 That is a lot of dead bodies.

You can tell this is Souls-like as soon as you start the game. The story just throws you into it. You get an intro that involves a cult and a space station and then you find out you were created by something called The Author and you have to find the Architect. Ah, vague story points that leave me confused at the start; I’m right at home. It fits perfectly and does a great job of establishing the setting and mood. I wish there was voice acting, however. You have to read most of the dialogue and what little there is being spoken is generally in some alien language I don’t understand. Some good voice acting really would have helped bring some life to this rather desolate space station.

One change I do enjoy is the ability to jump with just the press of a button rather than Dark Souls’ running hop. The jump in Hellpoint is a little awkward, but it allows for more exploration and is well implemented. It is cool to do some little platforming to a place you thought you couldn’t access only for goodies to be left there to reward curious players. It adds an entirely new dimension to exploration and I love it.This is great because there are a lot of goodies left around. Curious players can be rewarded with weapons, armor, and mods for your body, mind, and floating cube thing. One very important mod for the floating cube thing is the ability to travel to the last stable rift, think bonfires, to level up. You could also turn it into a flashlight. You have no reason to do this but it is an option.

These rifts may act like bonfires but there is one thing I hate about them. You need to find a special item to connect them with other rifts so you can fast travel. This is unnecessarily obnoxious. Pretty much all of your upgrades happen at the observatory and if you don’t have an item to the rift in your area to it you just can’t upgrade or create weapons and armor unless you run all the way back. I don’t like this at all. 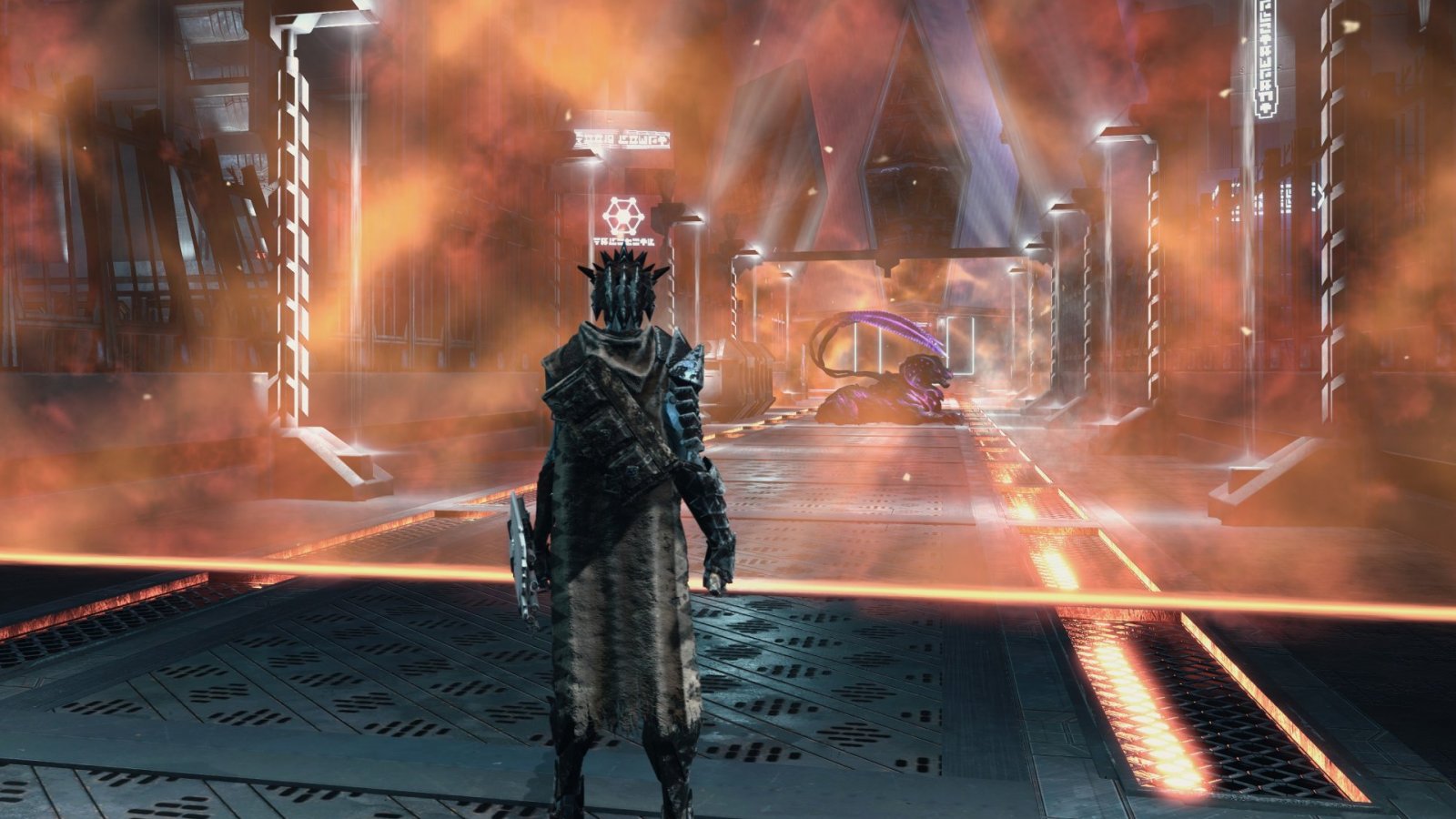 I have seen this before. I know this barrier means a boss fight.

This running around is made even worse by the fact that I find Hellpoint to be a bit of a grindy game when compared to FromSoftware’s work. I found my best bet to defeat bosses was to upgrade my weapons and armor while leveling up as some of the bosses are tanky otherwise. I don’t care for this approach, but I wouldn’t mind it nearly as bad if I didn’t need a damned item to fast travel to the place where I can do all this upgrading.

One of the most interesting changes is the fact that the space station is orbiting a black hole. The position of the black hole can make enemies stronger, make different enemies spawn, and just in general cause a lot of chaos. It adds an unpredictability factor that kept me on my toes. This is a great idea that I wish was just a bit more fleshed out. I would love for it to change more stuff and make drastic changes. New areas, hidden bosses, make it affect your gear and more stuff like that. I can’t say for certainty that nothing like that exists, but I never ran across anything like that so I would love to see a lot more of it.

One thing I don’t like and is the biggest thing holding this game back is that I don’t understand the rules of this game. Enemies respawn when you die. They also respawn when you level up and restore health. Sometimes. Sometimes they stay dead. Sometimes they just randomly respawn when I’m walking around exploring and this completely throws me off. Not only am I not expecting it, but seeing enemies where I killed everyone makes me lose all sense of direction. It is confusing for a multitude of reasons. It might have something to do with the black hole, but I have no idea. 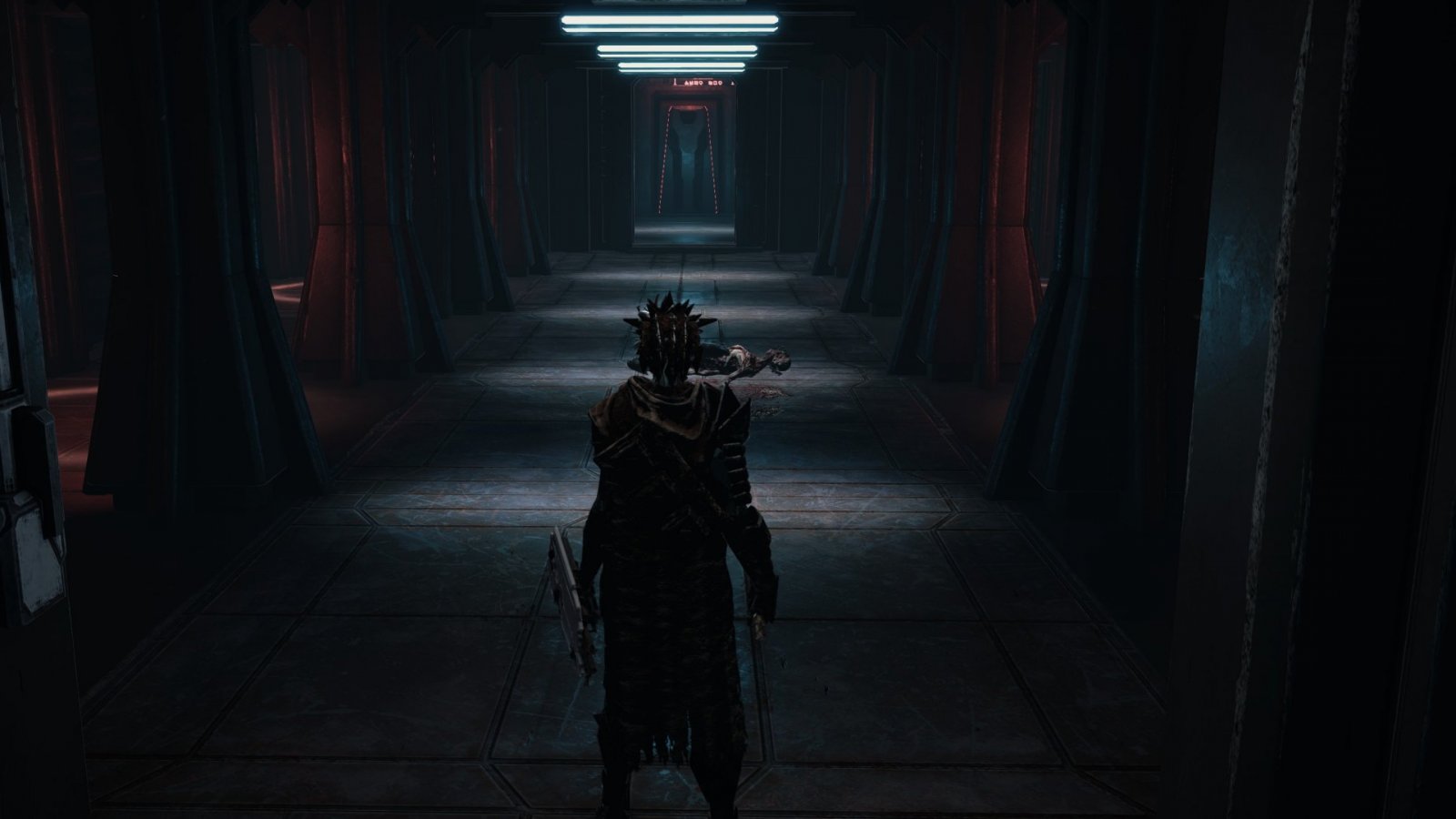 Hellpoint does a solid job on the atmosphere.

Sometimes when I die a green ghost of me spawns and haunts the area I died in. Sometimes it doesn’t. This also might have to do with the black hole but I genuinely have no idea. These mechanics aren’t bad, but the way they defy explanation is. Like a disobedient dog, Hellpoint seems to do whatever it wants to do whenever it wants to do it.

Another major gripe I have is that the hitboxes are a little funky. Dodging to the side to avoid an attack doesn’t seem to work as often as it should. I’ll dodge to the back of the creature and still get hit by a vertical slash at times. Other times an attack will miss me even though it clearly nailed me. This inconsistency can make the longer boss fights more difficult than they should be. It can be hard to get a feel for how and when you should dodge an attack.

Something I both love and hate about Hellpoint is the ragdoll bodies. If you have played a Souls-like before you know ragdoll bodies going crazy is a part of the package. I like it because it is hilarious to see the corpse of an enemy you just killed get flung even further into space. I hate it because, while hilarious, it kind of destroys the atmosphere and seriousness of the game. Hellpoint does a solid job of creating a dark and haunting space station. Bodies sticking through walls kind of detracts from that; even if it is funny.

Hellpoint is an interesting entry to the popular Souls-like genre and I think it is one worth playing. I wish it was more clear on the rules of the world and I’m not a fan of fast travel being restricted. Still, the black hole and rewarding exploration make Hellpoint a fun and rewarding game.

Hellpoint is an interesting entry to the popular Souls-like genre and I think it is one worth playing. I wish it was more clear on the rules of the world and I’m not a fan of fast travel being restricted. Still, the black hole and rewarding exploration make Hellpoint a fun and rewarding game.

Austin Fern has been playing video games his entire life. The first console he truly fell in love with is the PlayStation 2 with Sly Cooper, God of War, and many others really leaving an impression. He enjoys all genres of games from FarCry 5 to Danganronpa and everything in between.
Related Articles: Hellpoint
Share
Tweet
Share
Submit