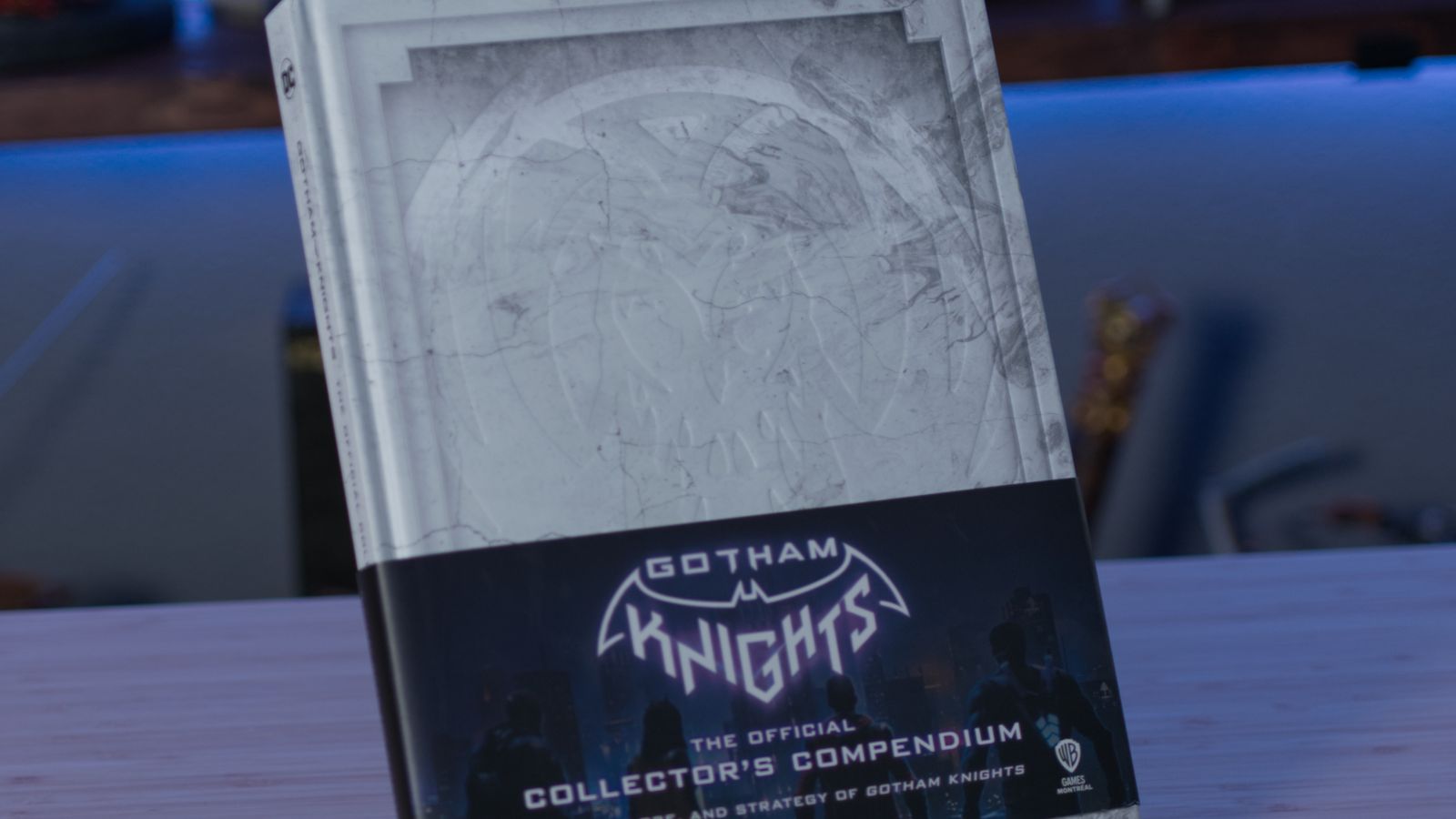 I’m a sucker for art, and even more so for power fantasy superhero goodness. That said, I’m frankly tired of hearing Batman’s origin story. There’s only so many ways to spin that marble, and after a while you’ve seen every angle. Gotham Knights represents a much-needed break from that, offering up a scenario where the extended Bat-family gets their time in the sun. Today we’ll take a look at Gotham Knights: The Official Collector’s Compendium, a companion art book from Insight Editions that showcases the world of Gotham with the caped crusader out of the picture.

Insight Edition has always been about high-quality books, and this is no exception. A wonderful glossy cover with a Court of Owls embossed surface wraps the 256 pages of gorgeous printed work. Richly colored, the Gotham Knights: Official Collector’s Compendium dives deep into the inky depths of blue, black, red, and neon that dots the neon-soaked downtown Gotham. It’s laid out extraordinarily well, even if it’s less of a traditional art book than we are used to. 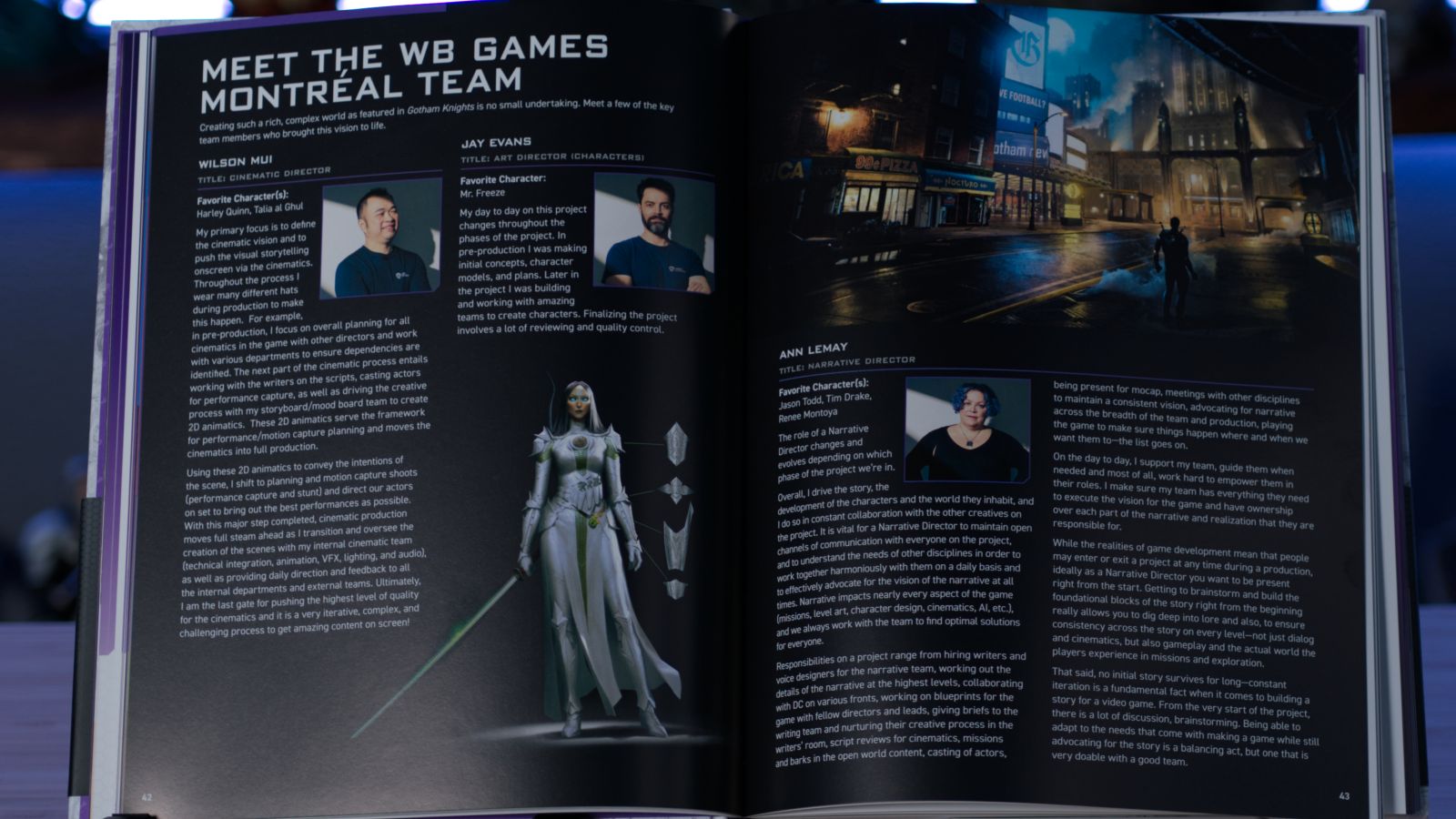 The book is split across a group of “case files”. We get a forward from Fleur Marty, Executive Producer on the game, followed by the words “Batman is dead” – a declarative statement that carries with it a great deal of weight. Gotham is without its honored son Bruce Wayne, without its most stalwart defender in Batman, and the Bat family is now without their patron and mentor. Batman is dead, and the criminals are well aware of that fact. It’s up to four rookie crime fighters to pick up the mantle before it’s too late. That’s what makes Gotham Knights interesting, making the extra insight provided by this book especially compelling.

As we crack this open, I want to call out the gorgeous Court of Owls embossed cover. It resembles a marble finish, with the raised cult’s iconography, making it pop off the surface in an awesome way. Nice artwork is always appreciated, but tactile stuff like this elevates it to an entirely new level. 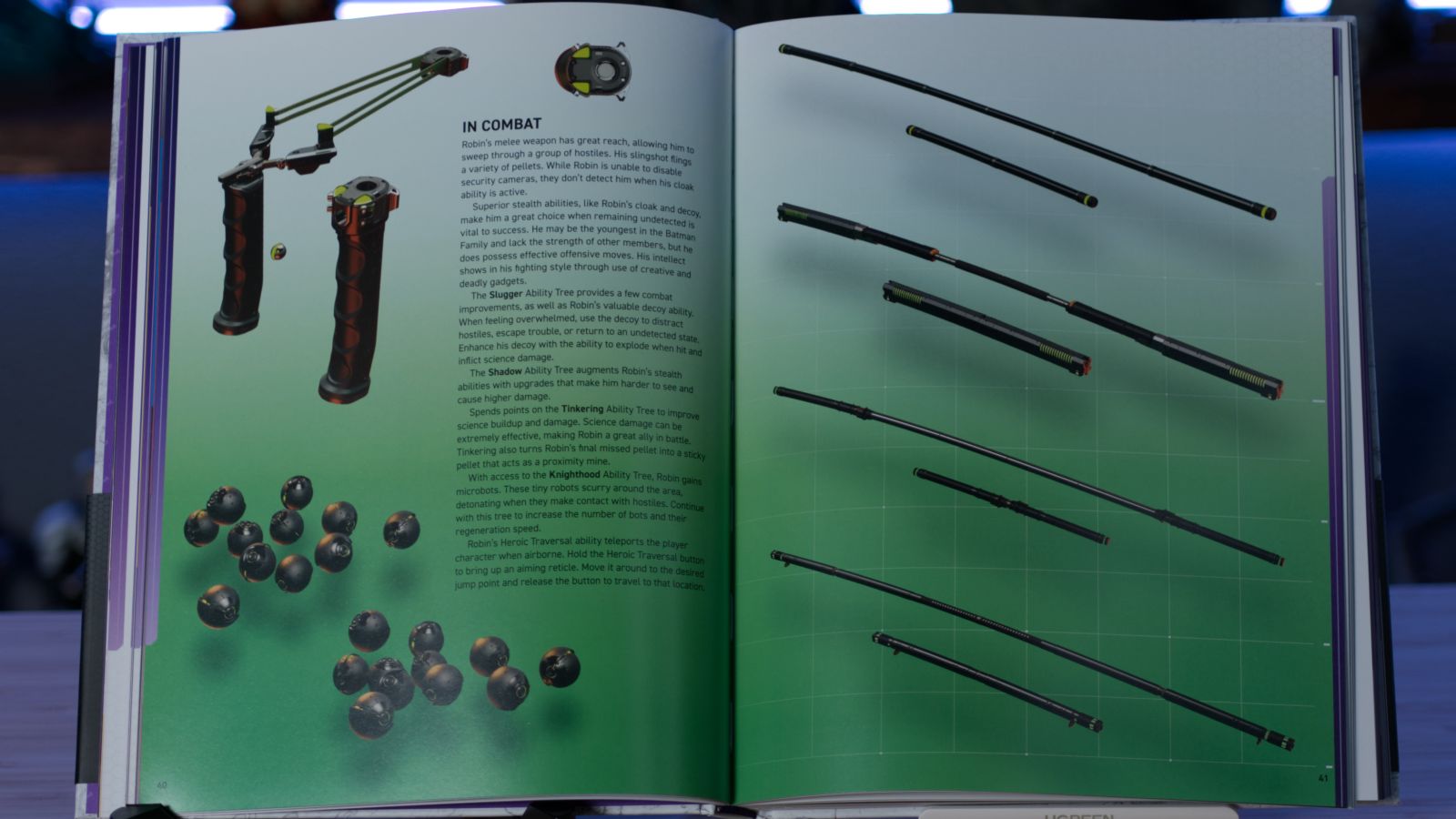 The book was penned by Michael Owen and Sebastian Haley, two veterans in the game guide industry. Owen has penned guides for the likes of Destiny, The Last of Us, and Batman: Arkham Knight. Haley is a best-selling author having penned Playing with Super Power and 30 Years of Mega Man. The pair tackle the subject matter in a unique way, making a book that comes out part guide, part artbook, and part character study. Let’s take a look at the Batgirl section to see what I mean.

Kicking off the section on Batgirl, we see four sketches of Barbara Gordon in her armor and in casual clothes. These four sketches couldn’t be more different, with the larger of the four looking more like a rookie pencil sketch when juxtaposed with the rest looking more confident. In one corner we get a biographical overview of her strengths, weapons, and preferred method of traversal, among other things. Tucked in the opposite corner, we have a brief quote from Game Director Geoff Ellenor, who talks about why he loves Batgirl best. Turning the page, we see a number of screenshots from the game, showcasing Batgirl’s expertise with hacking, with another quote from Narrative Director Ann Lemay on how Batgirl’s character development plays out over the course of the game. Each character study plays out similarly, with a full accounting of their weapons and tactical elements to boot.

Fast forward to the Contacts section and we start to see some real behind-the-scenes work that brought each one of the villains to life. It looks like the team spent an extensive amount of art asset time on imagining the GCPD and how these overwhelmed police officers might look. 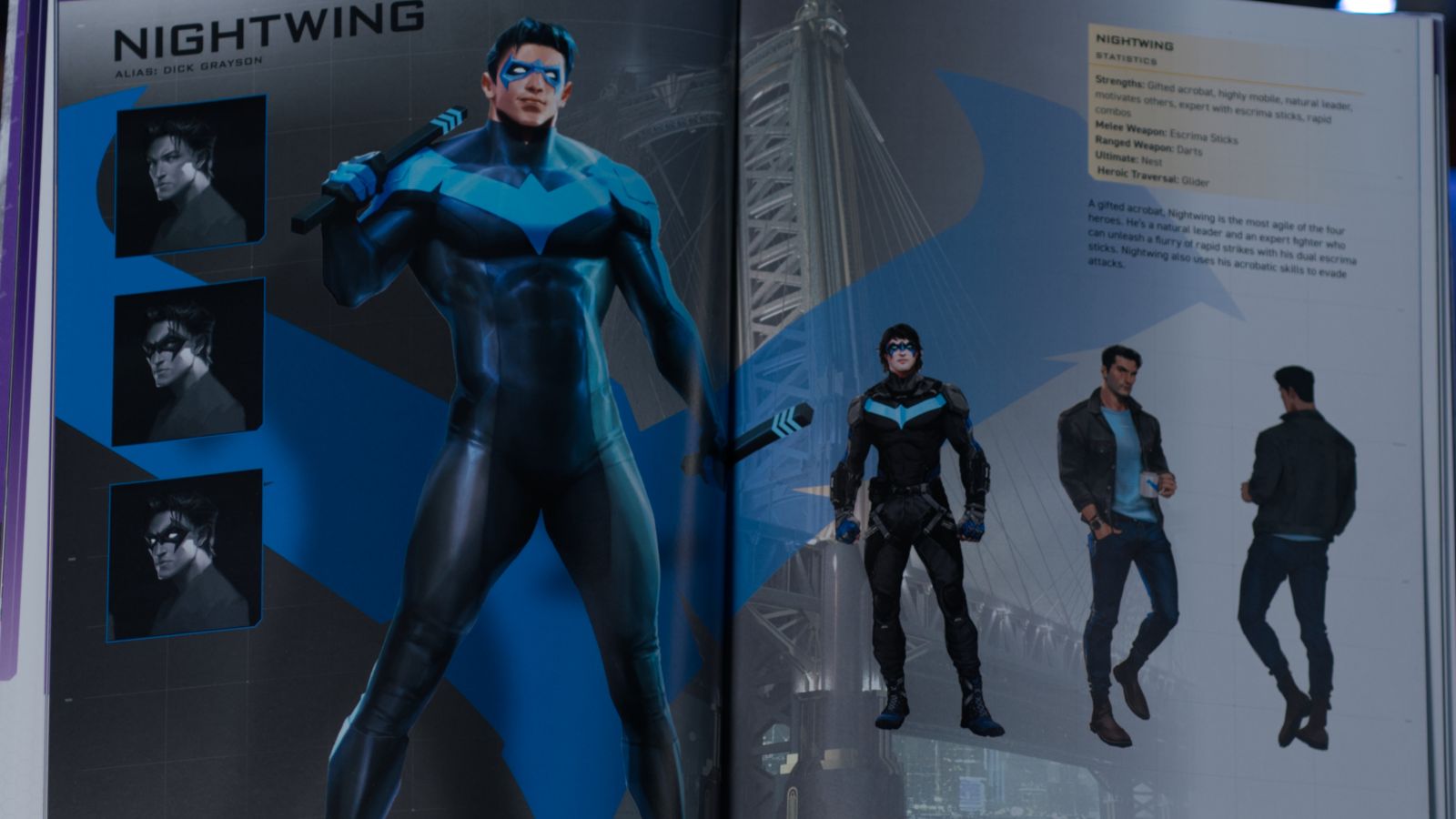 It’s no surprise that the menagerie of villains would receive a similar background treatment, with showcases for Mr. Freeze, The Court of Owls, The League of Shadows, and more all getting dossiers on who they are and their motivations. From here, we jump directly into Case Files.

As the Bat family looks to trace back Bruce’s final case, they engage in some light detective work. As such, the book is laid out as individual cases, switching gears to be part mission guide, part art book. Each mission is spelled out with appropriate tactics provided. Amidst that advice, however, are additional mini-interviews, a mixture of artwork and in-game assets, and some words on gameplay controls when appropriate. I particularly like the full-page mugshot of Harley Quinn, her entire scrapbook, and the extensive section on owl symbolism for the Court of Owls. 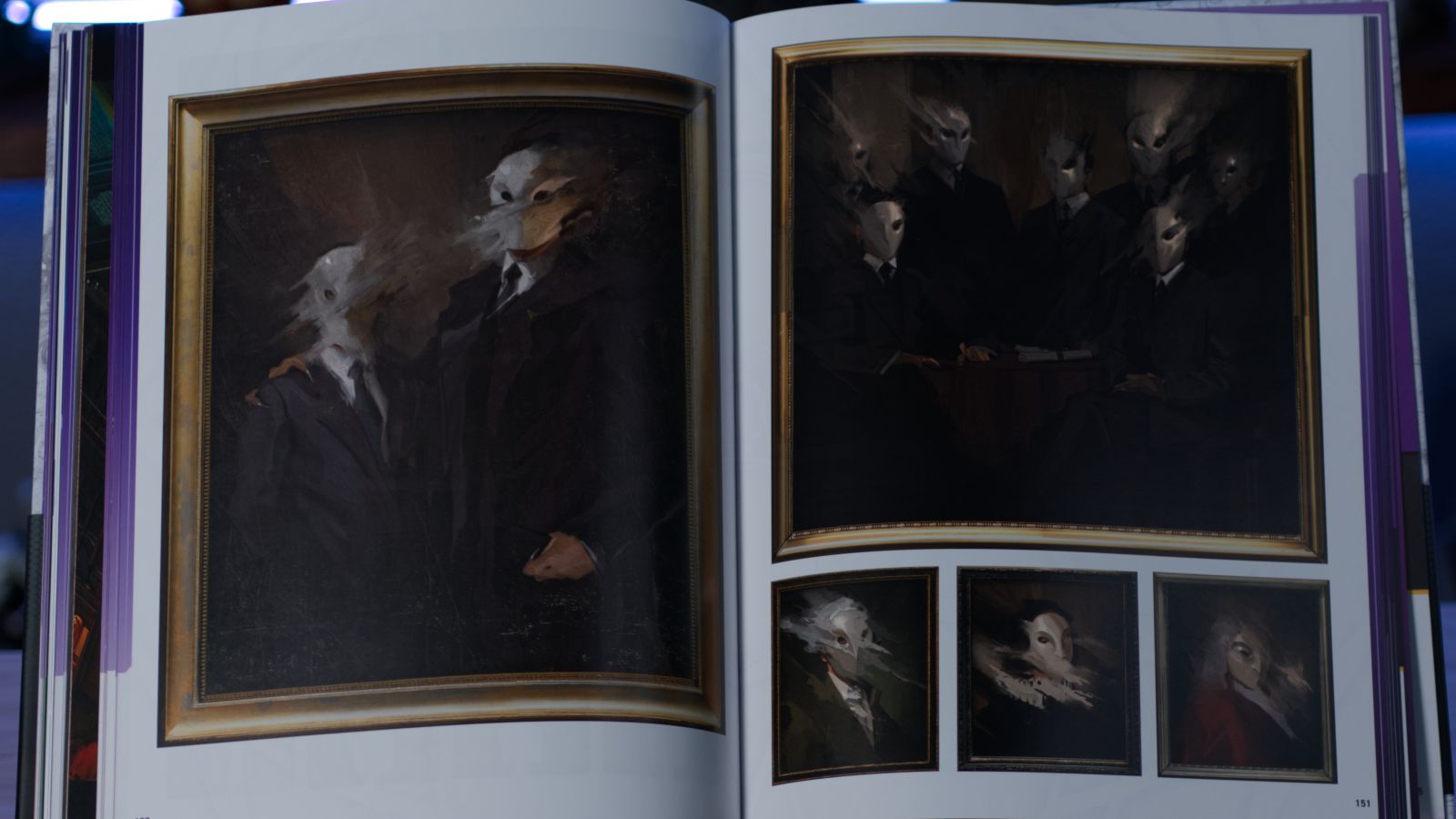 This book spells a bit of a departure for publisher Insight Editions. Most of their books have some minor spoiler content here and there, but as this compendium doubles as a mission guide, you are seeing every major story beat laid bare here. As such, you’ll want to avoid thumbing through this book until you’ve either beaten the game or need help on a specific mission. Still, what’s on offer here is nothing short of extraordinary fan service for any Bat-fan.

Part mission guide, part artbook, the Gotham Knights: Official Collector’s Compendium provides a behind the scenes look at the Bat Family. While it’s overflowing with spoilers, the art and mini-interviews make it worth the pickup.

Ron Burke is the Editor in Chief for Gaming Trend. Currently living in Fort Worth, Texas, Ron is an old-school gamer who enjoys CRPGs, action/adventure, platformers, music games, and has recently gotten into tabletop gaming. Ron is also a fourth degree black belt, with a Master's rank in Matsumura Seito Shōrin-ryū, Moo Duk Kwan Tang Soo Do, Universal Tang Soo Do Alliance, and International Tang Soo Do Federation. He also holds ranks in several other styles in his search to be a well-rounded fighter. Ron has been married to Gaming Trend Editor, Laura Burke, for 21 years. They have three dogs - Pazuzu (Irish Terrier), Atë, and Calliope (both Australian Kelpie/Pit Bull mixes).
Related Articles: Culture, Gotham Knights: The Official Collector's Compendium
Share
Tweet
Share
Submit