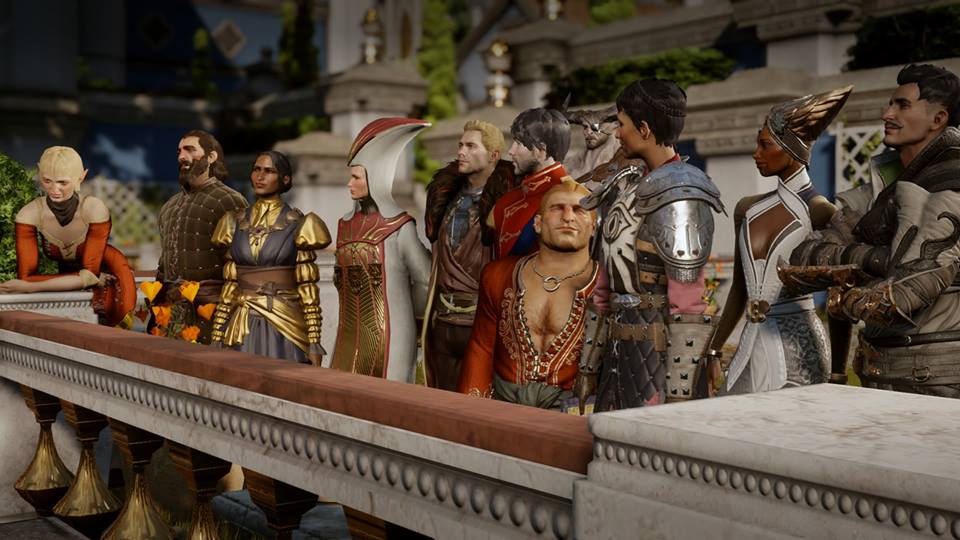 Dragon Age: Inquisition’s final DLC “Trespasser” is an example of Bioware properly painting a picture of what comes next in the way the original game didn’t.

By the time I finished it, “Trespasser” had succinctly answered many questions I had about Inquisition’s ending, the fates of the members of the cast I’d grown to adore, and just what the future holds for the Dragon Age series. Not all revelations were ones I wanted to hear, but when it wasn’t ripping my heart out, “Trespasser” tied up loose threads from Inquisition while creating more than enough new ones to get an idea of what the next Dragon Age game will entail.

Two years after the fall of Corypheus and the closing of the Breach, the Inquisition is still active under the leadership of the Inquisitor, with the original party each continuing to pass through the organization as the years have gone by. With the threat the group was founded to stop having been dealt with for years now, just what role the Inquisition plays in the world of Thedas is currently in question, and leaders from several nations have gathered at the Winter Palace in Orlais to discuss just that. As such, all the members of the Inquisition have returned to offer their support.

Getting to speak to each of my party members one last time gave me a warm sense of bittersweet nostalgia, because each of them had moved on past the Inquisition and on to more personal matters. Even characters like Dorian, my love interest, who seemed devoted to staying by my side two years ago, had become tangled up in something that meant our relationship was going to probably end up long distance. Even before anything has been decided about whether the Inquisition will continue in the form that you know it, “Trespasser” is constantly dropping hints that, regardless of the decision that is made, things won’t be the same. The moments you do get to spend with everyone are endearing and reminded me just how much I’ve come to love these characters over the past year. But even so, there is a tinge of sadness to all of them, as “Trespasser” always feels like you’re on the verge of the end of something.

While the Inquisition’s purpose is being debated in front of a few dozen nobles and politicians, the group finds that the meeting has drawn the attention of the Qun, and has to reunite for one last mission. The journey brings the group through the elven Eluvian network, and is filled to the brim with new information about the history of Dragon Age’s elves and how an old friend factors into all of it. It’s a great set up, and you’ll see and learn a lot more about the Dragon Age universe, even though certain areas near the middle of “Trespasser” are more tedious and disorienting than the rest of the story.

Despite the Qun, the state of the Inquisition, and the idea that all of their friends are preparing to once again scatter to the other corners of Thedas all being crammed into “Trespasser,” what is perhaps most interesting and affecting is what this final chapter means for the Inquisitor themselves. As it’s been two years since they’ve been marked by Corypheus’ orb, the “anchor” on the Inquisitor’s hand is quickly presenting a larger problem as it begins to physically harm them.

“Trespasser” has the player learning new anchor-related abilities by interacting with the elven magic found in the Eluvian network, but it also is slowly draining the life out of them. Both the Inquisitor and the player have to face the idea that their character may be on the brink of death, and what that means for the Inquisition, the party, and the future the Inquisitor may have wanted.

“Trespasser” began with me talking about what the future held for each member of the Inquisition, but some of the most heart-wrenching moments came from when I had to consider that maybe my Inquisitor might not be present for it, and watching these characters all deal with the fact that their leader, friend, or lover’s days might be numbered.

While it may spell the end for Inquisition, “Trespasser” doesn’t end with a sense of finality that implies this will be the last we see of these characters, even if it’s not in the form we know. Inquisition was one of my favorite games of last year, and gave me some of my favorite characters Bioware has ever written, but with “Trespasser,” I finally feel eager to know what comes next where the end of the main game just left me annoyed at the intentional vagueness of its cliffhanger.

Just how final the goodbyes I said in “Trespasser” are is yet to be seen, but the groundwork has been set for the work of the Inquisition to be more meaningful moving forward than anything I did as Hawke or the Warden. Dragon Age has always changed settings, characters, and story arcs with each subsequent game, and while “Trespasser” doesn’t outright subvert that expectation, it does enough to make me hopeful that perhaps I’ll be seeing the Inquisition again soon, in whatever form it may take.

With "Trespasser," Dragon Age: Inquisition feels complete. Players get a chance to spend a little more time with the wonderful cast, and get a glimpse into what the members of the Inquisition will be doing next, making "Trespasser" a fitting send off to one of Bioware's best.