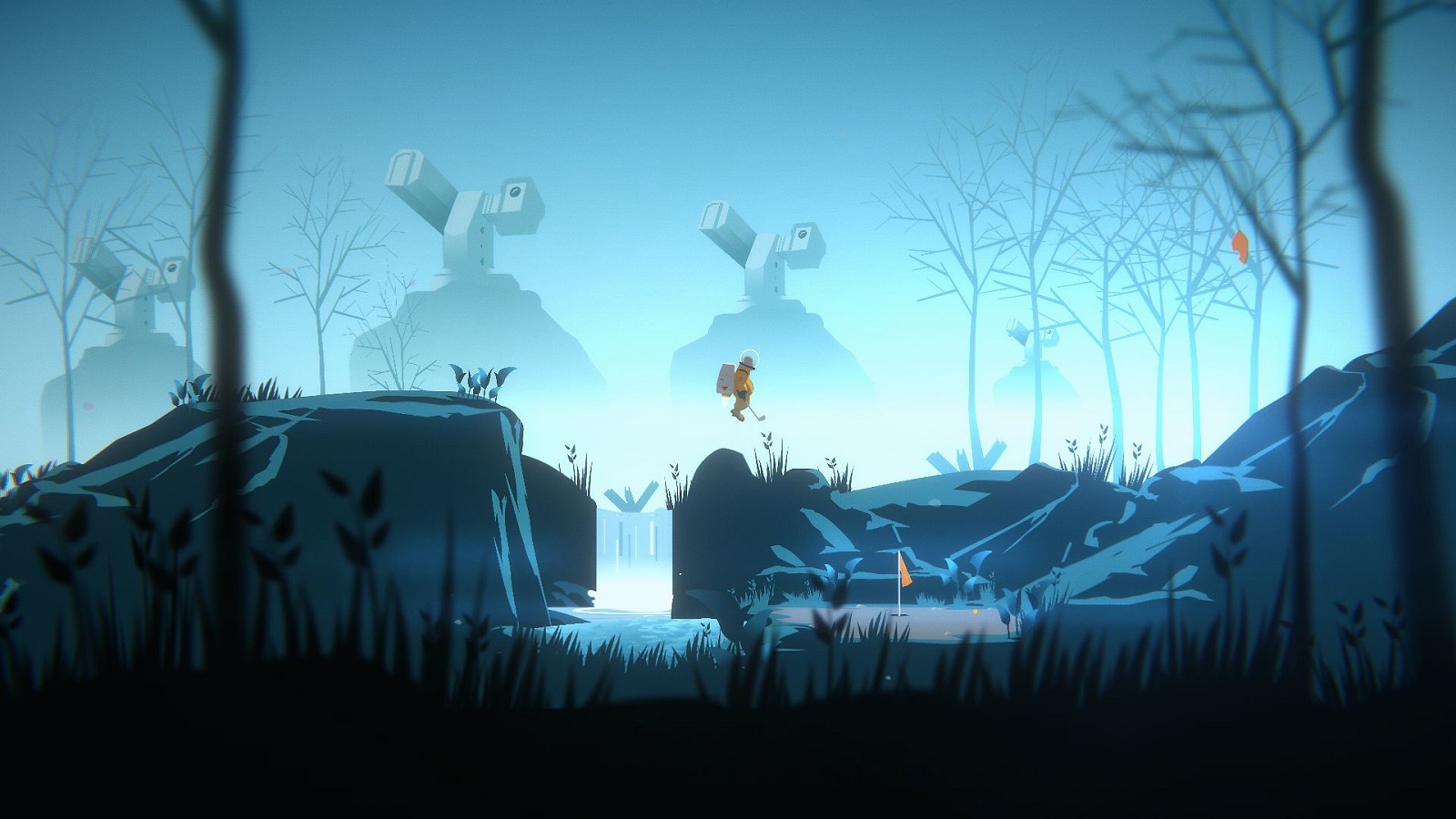 Golf Club: Wasteland reminds me why I love video games. I didn’t think 2-D golf would be the medicine I needed during these trying times, yet here we are. It’s been a chaotic few years, as I’m sure you’ll agree, and the future seems equally bleak. Between our inability to get this virus under control and elites pursuing passion projects while global warming’s grip continues to choke the life out of the planet, among other things, the need for an escape is at a high. We’ve all been searching, but our eyes are always drawn back to the fire. It almost feels irresponsible to not look and learn from the consequences of humanity’s actions, though reckoning with this reality still does a number on us. In Golf Club: Wasteland, your lonely golfer is also looking for an escape. An escape from the same problems in a different time, only there are few places left for him to go. The game is a beautiful blend of whimsical golfing and sardonic commentary wrapped in a blanket of nostalgia and straight-up vibes.

In this future, humanity has hammered the final nail in its own coffin, sending the survivors to Mars where they live every day longing for the past. Surprisingly, or perhaps not, Tesla City’s most in-demand resource quickly became Earth memorabilia. Everyone’s itching to stave off the sting of saudade, and that desire to share any Earthly sounds, songs, and stories birthed Radio Nostalgia from Mars—the best radio broadcast on the planet! The golfer agrees; his earpiece is always feeding him Radio Nostalgia’s tales and tunes, but he’s a good ways away from Mars. While normally reserved for the wealthy, the golfer finessed himself a trip to Earth where it’s become a luxury to tee up in the ruins of civilization. And, despite the whole “guilty parties golfing on our graves” thing, it’s an awesome three hours. One swing at a time, players parse Golf Club: Wasteland’s fiery anger towards “Silicon Valley Ideology,” the thing that helped destroy the golfer’s raison d’être. 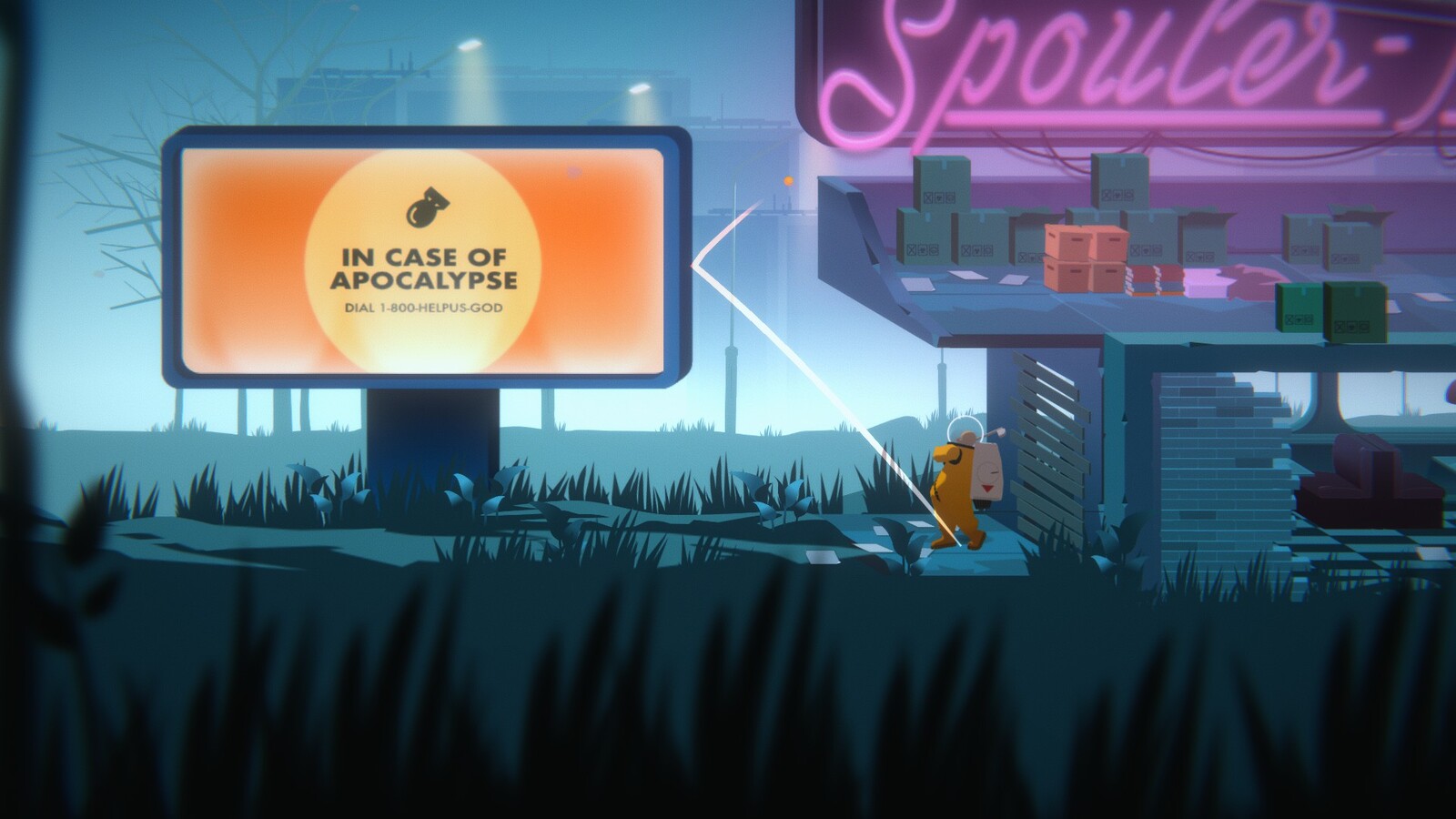 In case of apocalypse, play golf.

Golfing in the game is as simple as it is intuitive. In one smooth motion, you can choose your angle and your power, then let go to watch the ball fly. Golf Club: Wasteland borrows from the greats of 2-D golf before it, and everything from the controls to the physics to the general game feel is in top form even if there’s nothing new brought to the table. There are no clubs to swap between or weather to account for, just interesting obstacles and compelling environments rooted in the game’s central themes. New mechanics and challenges are introduced at a steady pace. Expect precision trials, shortcuts, traps, and timing puzzles spread across a course of 35 holes, with each subsequent level more complex than the last.

It’s airtight golfing, save for certain levels that highlight a few inconveniences. As good of a time as I had, golfing my way through the game twice—once on Story mode and then again on Challenge mode, where making it under par becomes a requirement—I was never fully confident in my swings. My putts in particular I had no faith in. Players are ill-informed on the friction of certain materials, and we’re not talking sand bunkers. My golfer wasn’t the only one with his head in his hand whenever the same putt in one level didn’t work in the one after. A platform might eat up a golf ball’s momentum and slow it down enough to save it from a nasty drop, but on another surface, your golf ball could bounce along unbothered.

As you play your way past decaying monuments to human greed and vestiges of happier times, the veil of mystery around the golfer slowly lifts. Radio Nostalgia from Mars has a co-star in the game’s aggressive environmental storytelling. Every level sheds a little light on what the golfer is running from, and eventually, what he’s chasing. If a “Tesla City” on Mars wasn’t a good enough indicator, Golf Club: Wasteland is incredibly on the nose with its references and blunt with its messaging. Levels are littered with familiar iconography and sport names like “Covfefe Ideology.” Accessible spaces pre-Great Catastrophe have been made grueling to navigate, let alone golf in. Golfing gives you an opportunity to know each environment intimately and soak in every bit of the story, as funny as that sounds. 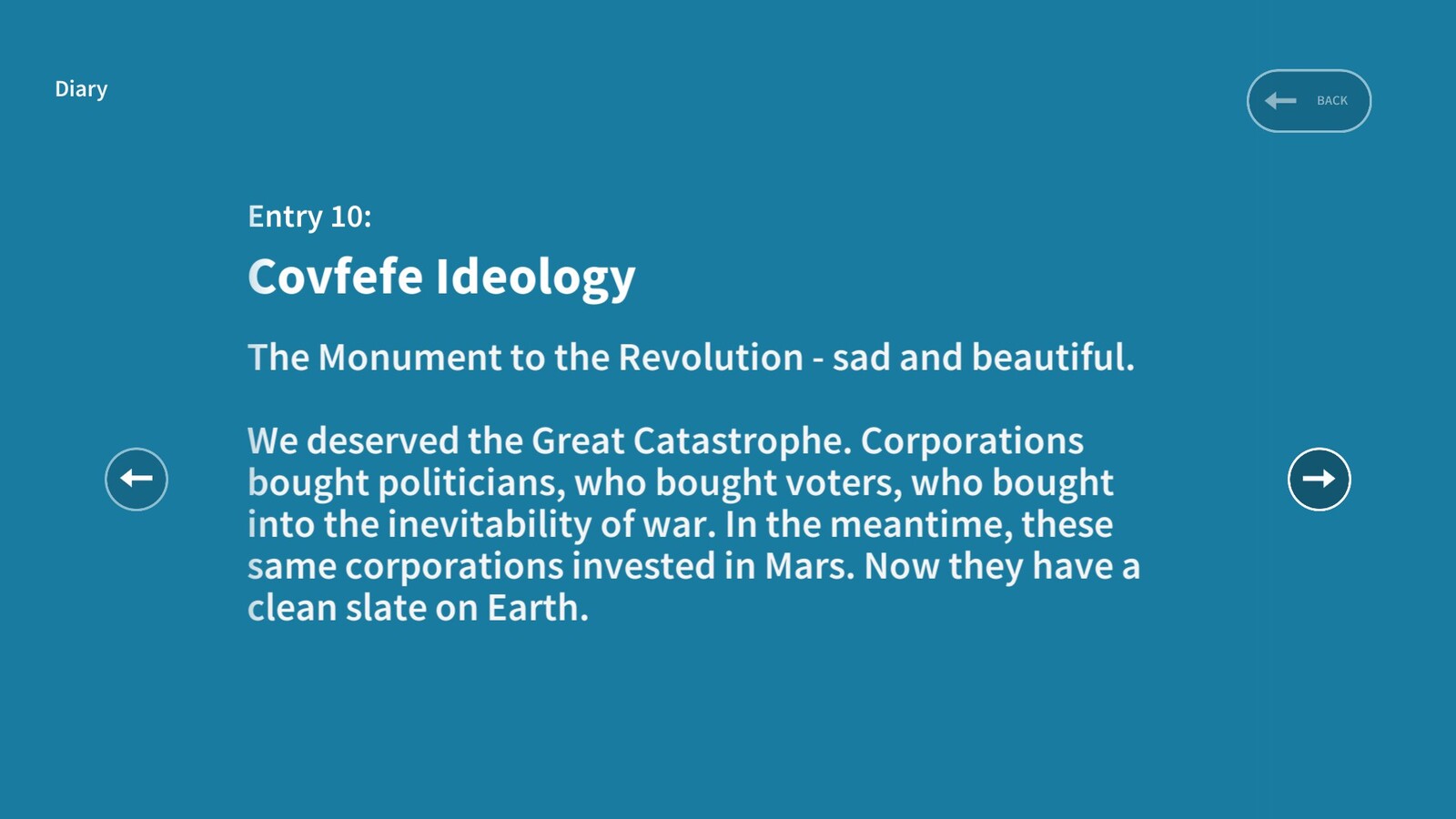 “In-your-face” is kind of an understatement.

No facet of the experience is without a role in the game’s narrative either. Titles and accompanying taglines set up the self-contained stories of each level and build on an overarching plot. If you make it under par, you unlock passages from the golfer’s diary entries while clearing the story mode scores you an original graphic novel that paints the complete picture. Each and every swing carries a bit of narrative weight; the game is always ready to reward players. Everything flows into each other so effortlessly that I had a hard time putting down the club once I got the ball rolling.

I faced some resistance in the later levels—their relatively exhausting gauntlet of tough shots mixed with personal pressure to get under par was a recipe for a minor restart-spamming nightmare. On top of that, there’s a decent bit of double-dipping as far as levels’ thematic contributions go; the game can easily cross the line into “too much” territory with its exhausting references. I wasn’t always so inspired to make it to the next hole, especially not without a healthy dose of my precious brain food to keep me afloat. But even when golfing sees the odd lull, I could count on Radio Nostalgia from Mars to keep the energy up. The broadcast exists beyond levels and ignores restarts; even if I wasn’t making progress, new narrative content still made it to me via the radio waves. And, might I add, as a save-scumming perfectionist who feels absolutely awful every time they violate the narrative flow with their incessant reloading, I greatly appreciate this. 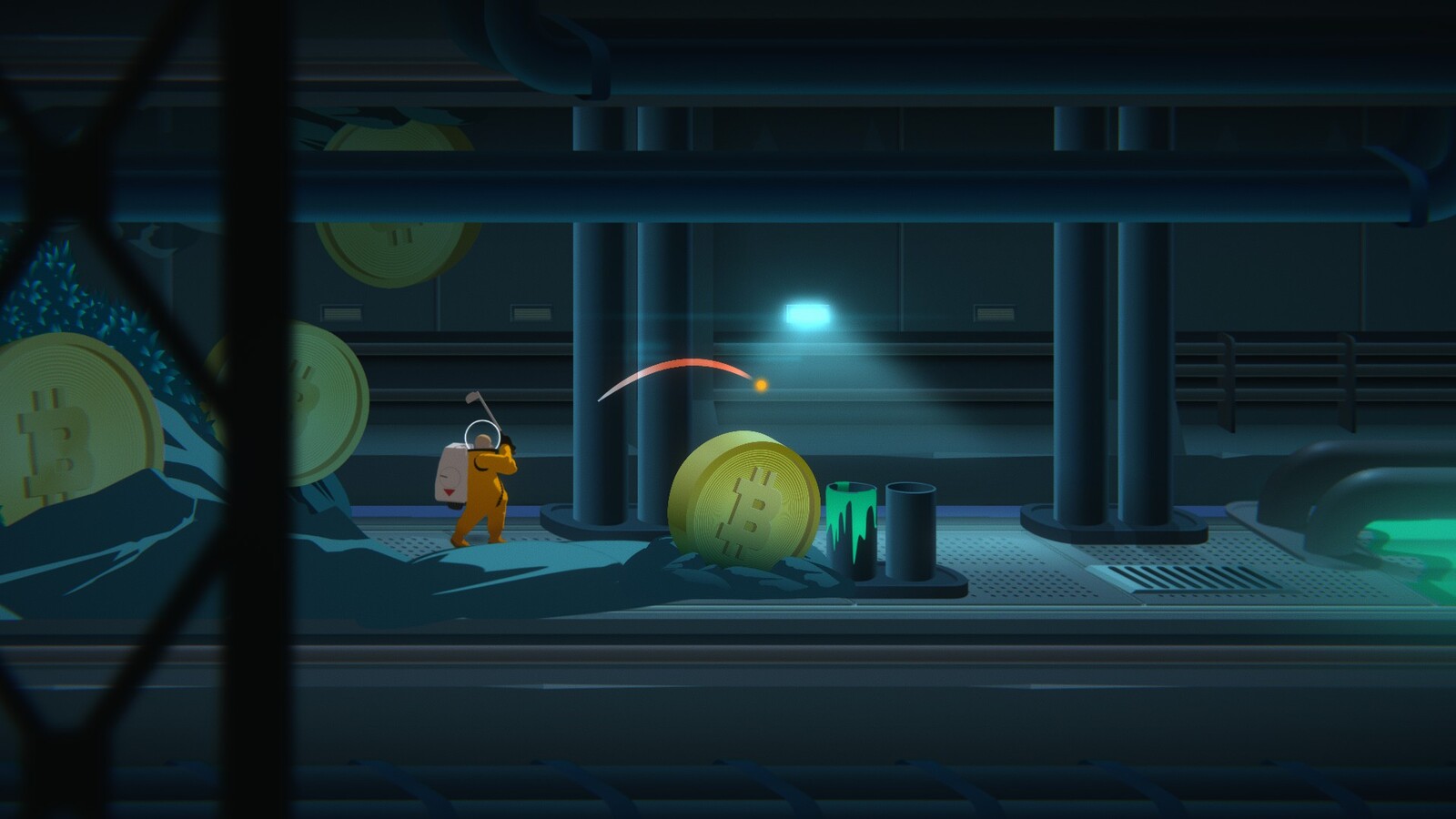 To the moon, but literally.

The success of Radio Nostalgia from Mars is a testament to Golf Club: Wasteland’s entrancing audio experience. Designed lovingly and implemented impeccably, Radio Nostalgia itself has these subtle adaptive flourishes, like ducking in and out when the golfer’s underground, that carry the game’s narrative beats. The wealth of “vintage” hits, from jazzy love songs to synthy bangers, are nostalgic now, let alone a century into the future. They’re a perfect complement to the equally diverse environments and their uncannily cozy color palettes. It’s hard not to feel the emotions still living in those derelict spaces.

Punctuating the broadcast are little stories shared by other survivors adding themselves to the choir of dejected, homesick humans. They offer a touch more nuance to the discussion that the onslaught of sardonicism and on-the-nose references might not always capture. The characters read as sincere with genuinely touching stories that could’ve easily come across as mundane, but are brought to life through honest writing. Even if their perspectives aren’t quite in tune with your own, it’s their humanity and the love they have for what they’ve lost that wins you over. And when they leave, a new song gives you room to meditate on their experiences and yours. Sadly, the radio host only has so many guests and songs lined up before the broadcast loops—about two hours, which doesn’t quite cover an entire casual playthrough. I’d love it if more audio content could be added over time. 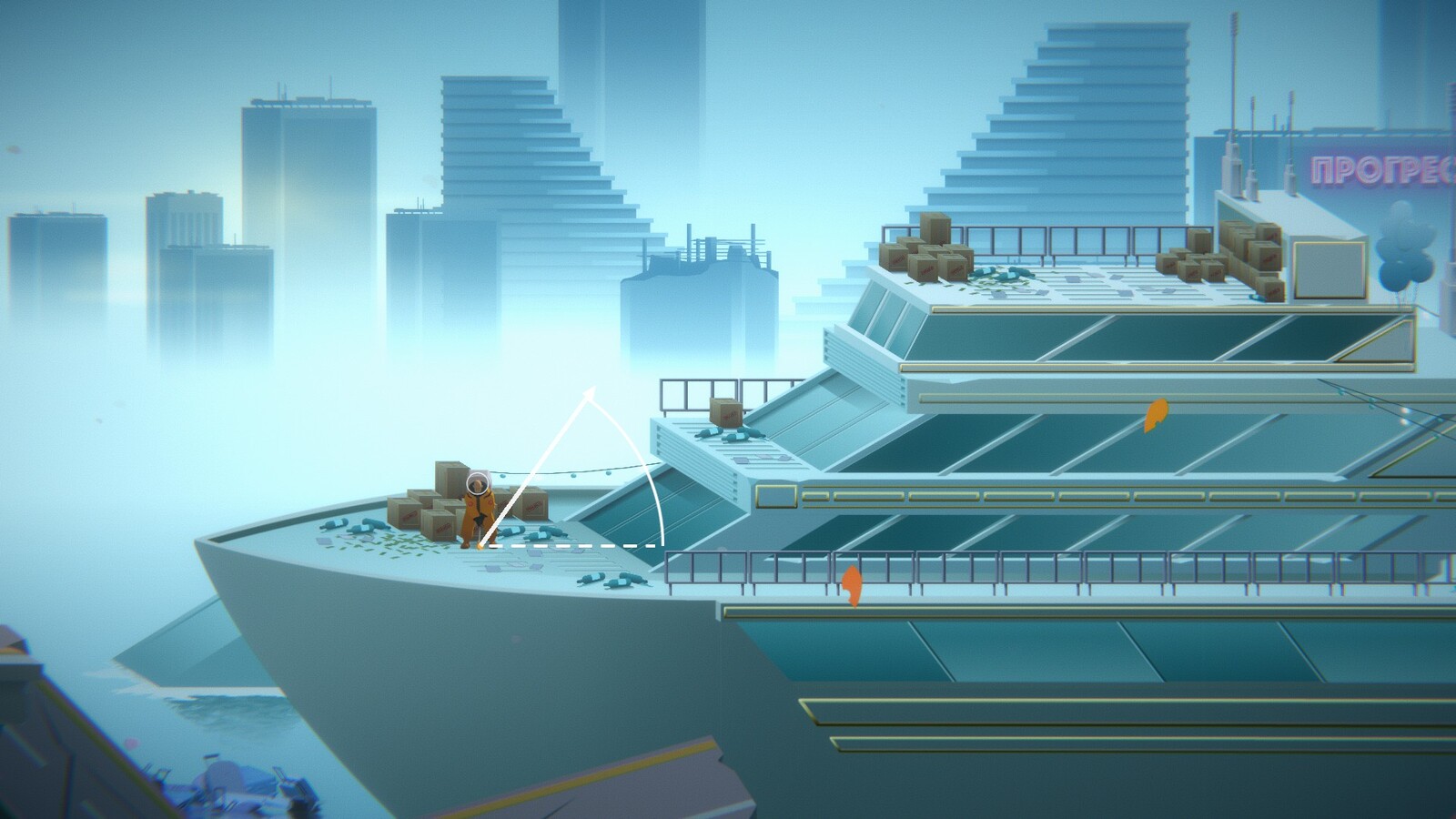 Radio Nostalgia from Mars is like the icing on the cake that ends up making itself the main event. It and the game’s potent environmental storytelling make the ultimate team tag. This is easily the best time I’ve ever had golfing, even if the golfing itself wasn’t as compelling by comparison. I’m reminded a lot of last year’s Umurangi Generation and its similar structure and portrayal of the end of the world. The intimacy of its photography and how it asked for players to inject a little personality into the experience went a long way in shaping how they engaged with it. I wish Golf Club: Wasteland opened its levels up a little more to give you space to do the same. Regardless, what it manages to say and accomplish through its deceptively barebones structure is nothing short of spectacular.

A beautiful blend of whimsical golfing and sardonic commentary wrapped in a blanket of nostalgia and straight-up vibes. Golf Club: Wasteland is a brilliant narrative experience that can’t resist imbuing anything and everything with stories.

A self-deprecating, overly sarcastic pair of glasses that occasionally possesses a human host in order to partake in the delightful process of playing video games, then immediately complaining about them. When he is not playing games (a rare occurrence), he can be found either writing about things that no one cares about, or haunting the quiet streets of his Canadian suburb.
Related Articles: Golf Club Wasteland, Indies
Share
Tweet
Share
Submit