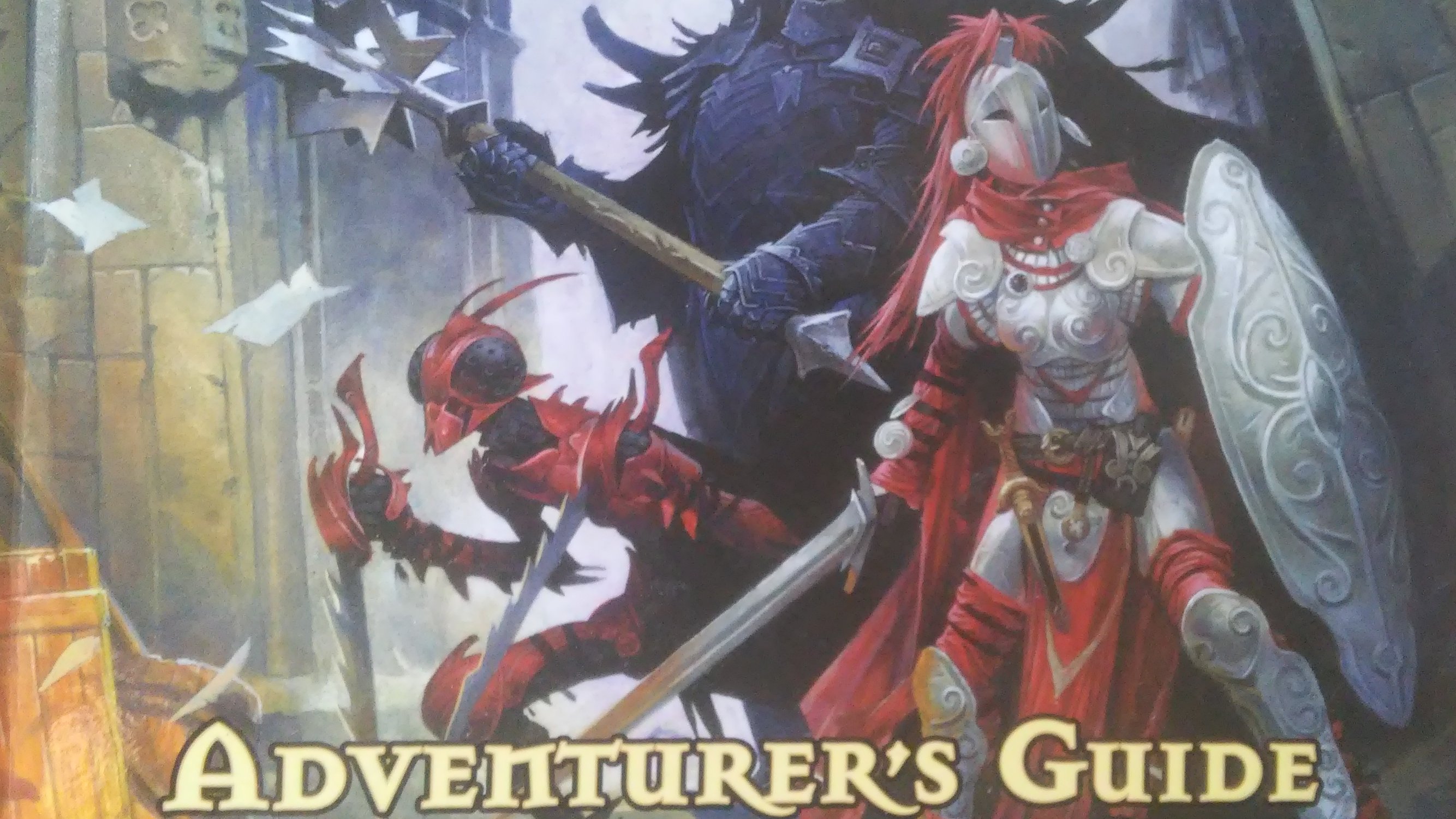 With every release, Pathfinder becomes a more developed, complex, and involving game. Occult Adventures opened our minds to the unseen, Ultimate Intrigue brought political complexity into the setting, and Bestiary 6 gave us all the weird we could ever need in a lifetime. Each of these releases threatened to be unnecessary, worrying me that at some point the game would feel more bloated than supplemented. Each time I came away satisfied that the new character options were exciting and unique, and added depth to a game I had been familiar with for eight years. With the newly released Adventurer’s Guide, Pathfinder is finally starting to show its age, and sadly, the excitement that I feel has finally been outpaced by the game’s mechanical bloat.

The premise of the Adventurer’s Guide is to flesh out eighteen organizations spanning Golarion, the main setting of Pathfinder, creating adventure hooks and opening up new options for your characters. These organizations vary in terms of goals, powers, and cultural motifs. Some of these are truly awesome. The Hellknights are an order devoted to the destruction of devils, and entry into said order requires killing a devil in lone combat during a special ritual. The Gray Maidens, hailing from the streets of Korvosa in Curse of the Crimson Throne, are a group of women bearing ritual scarification who protect their kingdom from the chaos left behind by an illegitimate ruler. The Bellflowers are halfling guerilla fighters working to eradicate halfling slavery. The Mammoth Lords are…Mammoth Lords, and if you need more information than that I don’t know what is wrong with you.

These groups are not limited to any particular climate, geography, or ideology

That should be enough to get you excited, but right off the bat the Adventurer’s Guide hits you with some strange dealings. This wouldn’t be a Pathfinder release if it didn’t have some new mechanic, and the Affiliation system feels profoundly tacked on. Each character has Affiliation slots equivalent to their Charisma bonus, which sets the limit on the number of organizations they may be a member to, including access to organizational prestige classes or archetypes. A new feat grants two extra affiliation slots. I would be surprised to learn anyone would spend something as valuable as a feat on this. You will only want to join a few groups over the course of a character’s life, and even then, why do we need a system for this? Group affiliation seems like the kind of thing perfect for jotting down somewhere on the character sheet and remembering, rather than attaching a numerical value to. Unless someone wants two or three prestige classes or purely nebulous benefits, it seems like an overcomplicated method of tracking something we can all remember.

Each organization is written with the same structure: an introduction outlining their basic goals, alignment, scope, allies, and rivals. We then get a few paragraphs outlining some basic history and current structure. These overviews are fun but vague, and only help your game to the extent that you fill in the gaps yourself. Following this writeup, each organization outlines three notable NPCs, whether they be leaders or especially prominent members. Those NPCs do not have stats, but we do get lists of their class levels and a few sentences on their past. What follows for each organization is a prestige class or a few, open only to members, new archetypes for existing classes, and some special magic items or spells.

Unpacking these sections, we find some things to appreciate and a lot to merely accept. The few paragraphs of lore we get are limited, and in some cases relegated to other books. For instance, the ritual during which a Hellknight prospect becomes a full member is outlined in another book entirely. One of the most interesting, iconic moments for a organization is not written in a book about organizations. This moment is surprising, but not when you realize that many of these groups owe their history to pre-existing books.

The Hellknights are possibly my favorite group. Magical masks only they can see through, morally nebulous methods, and interesting enemies. Imagine my dismay in finding one of their coolest aspects was left without explanation

The Grey Maidens, the Hellknights, and others do not originate in the Adventurer’s Guide. This fact wouldn’t matter if the book gave them individual attention that you could not get elsewhere, but in too many cases you don’t find that attention. The few paragraphs of lore are not enough to satisfy that itch if you happen to be intrigued by the origins of the Bellflowers, for example.

This deficiency is a shame, because some of what is written is encouraging. The book pays attention to how trans characters could use magic to transition, the struggles of forging an identity as a group with few resources, and cultural influences ranging from Africa to Arabia and beyond. At the same time, the presence of staid thieves and assassins guilds counteract these unique influences. At least in terms of concept, these organizations are very hit or miss.

At a slim 191 pages, the Adventurer’s Guide does not have much room to forge individual identities for any of these organizations. The vast majority of the pagecount is devoted to new character options. This choice puts the Adventurer’s Guide at a unique disadvantage as compared to other Paizo books. As part of the Open Gaming License, Pathfinder’s rules and character options are all available for free in wiki format. Usually, the books have enough additional setting information or fluff to make them worth the purchase, but the Adventurer’s Guide’s focus away from setting information and in favor of new classes and archetypes vastly decreases its usefulness as a standalone book. You won’t get much information on any group, and what you do may require reference to another tome. There are also no NPCs to use as either allies or enemies. The book’s usefulness to GMs is minimal, so individual players have to ask if they want to spend $40 on a book they may mostly ignore, when they could just as easily pick and choose what they want for their characters.

The actual quality of those choices is high, but only for characters who are willing to become highly specialized. The Red Mantis Assassins, for instance, are awesome in terms of art design. Their red carapace armor and saw blades strike an imposing form in any encounter. However, those weapons require several feats spent on specialization before you can enter the class, and that weapon focus only continues throughout the life of the class. If you don’t want to be a sawblade wielding assassin, there is little on offer here.

Some of these character options themselves hail from other releases, which does not lend value to the book. It is hard to count, but as much as a fourth of the classes appear to be reprints. Worse still, at least one of them has received a massive downgrade: the Lore Warden is now better considered the Bore Warden. (Am I actively trying to get fired or is that joke some sordid cry for help?) I don’t want to spend too much time explicating over math, but the class loses Combat Expertise until 6th level and the combat maneuver bonuses now only apply to a single type of maneuver, and that at a decreased efficiency. Among other nerfs, these two changes have taken much of the meat out of a class that was before a good reason to make a martial build.

That is not to say that everything is bad. With the bevy of new archetypes, new magic items, and new spells, there is likely to be something in this book that a player will find attractive. Even as a GM, I found more than a few tools I could use in my own game. Unfortunately, the sparse information would force me to use the Adventurer’s Guide as little more than a jumping off point.

The Pathfinder Adventurer’s Guide finally takes Pathfinder across the line into bloat. Some of these organizations are truly awesome, but their best features are either relegated to other books, reprinted from said books, too sparse to give enough information, or too specific to be useful to all but the most specialized builds. I appreciate a lot of what is on display, but question whether it needed this release to see the light of day.

John Farrell is a legal aid attorney specializing in domestic violence, living in West Chester Pennsylvania. You can listen to him travel the weird west as Carrie A. Nation in the Joker's Wild podcast at: https://jokerswildpodcast.weebly.com/
Related Articles: Pathfinder Adventurer's Guide, Tabletop
Share
Tweet
Share
Submit