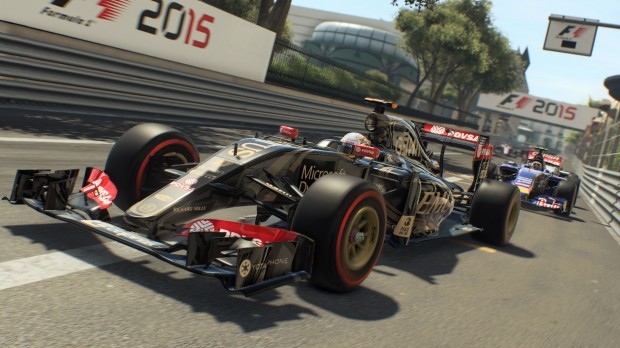 The Formula 1 racing series is well-known for its realism, and with F1 2015 this was developer Codemasters Racing’s first opportunity to bring that realism to the next level on the newest generation of hardware. Unfortunately, while F1 2015’s driving simulation and track recreation are entirely on-par with what we’ve come to expect from the series, F1 2015 ultimately fails to deliver on the promise of a next-gen F1 game by releasing a buggy, barebones title.

The good news is that F1’s true to life driving simulation is back and better than ever. The 2014 and 2015 seasons of F1 have been recreated down to the last detail. Vehicle handling is tight, responsive, and completely unforgiving, providing players one of the most realistic racing experiences available today. Each track in the game has also been given the same loving treatment, and are recreated perfectly. All-in-all it’s what you’ve come to expect from a series that prides itself on replicating the F1 experience down to the most minute detail.

Unlike previous F1 entries however, F1 2015 has been stripped of many of the modes it typically includes. In F1 2015, you’ll find only Quickrace, Championship Season, and Season Pro, plus the multiplayer mode, which is a pretty meager offering when compared to previous games in the series, or similar racing titles. Quickrace serves as the standard one-off racing experience, while Championship Season and Pro Season give the player a more immersive experience, as they manage a racer’s career across two seasons of F1 racing. While these modes provide the base F1 experience, it’s a shame to see some of the additional modes that have been added over the years be left in the dust.

The most disappointing aspect of F1 2015 though, is the multiplayer, which is almost unplayable. Getting into a match requires a great deal of patience, as wait times between matches are very slow. Once you finally get into a match you’re greeted by severe lag, and various visual bugs. Multiplayer has always been one of F1’s strong suits, so these technical issues are especially unfortunate.

The visuals in F1 2015 also leave a lot to be desired. It would be a stretch to say that they’re bad, but considering that Codemasters Racing built an entirely new engine for this title (dubbed EGO), and taking into account that this is their seventh F1 game, the graphics are entirely unimpressive. Cars have fairly simple textures, and distant objects on each track are fairly undetailed (in stark contrast to the detail dedicated to gameplay).
As usual with the F1 series, F1 2015 tends to prioritize realism over fun, and I always feel the obligation to warn players of this in my reviews. You’ll get the most realistic F1 experience possible, and unfortunately this means that you’ll be penalized for cutting corners, illegally overtaking opponents, crashing into fellow racers, and will be disqualified if you’re penalized too much. It’s all accurate to real life F1 racing…but also not very fun if you’re looking for an arcade experience. If you’re into F1 racing though, then you won’t mind at all.

F1 2015 feels like a step backwards for the series, which is disappointing given the new EGO engine, and the current generation of hardware. The core experience, however, remains one of the most realistic racing simulators available.

You know that jerk online that relentlessly trash talks you after every kill? That guy was probably Travis "Tie Guy" Northup. Competitive, snarky, and constantly wearing a tie, Travis has been writing his opinions about electronic media since he was a teenager, and is pretty much the only person to hold his opinions in high regard.
Related Articles: F1 2015
Share
Tweet
Share
Submit