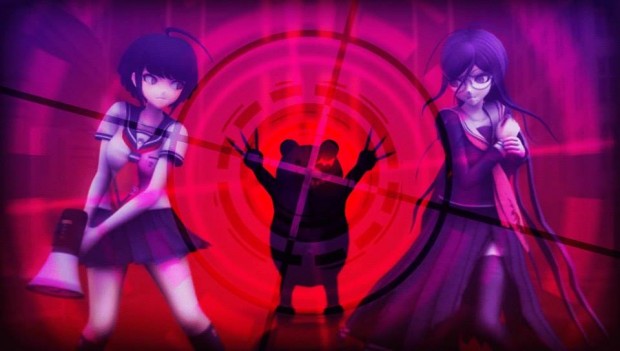 Now that Spike Chunsoft has taken players outside of the walls of Hope’s Peak Academy, one would expect a third-person shooter Danganronpa game to feel less enclosed, and for the player to not feel the same confinement they did when locked inside a school where they were forced to watch their friends kill each other off one by one. However, while the scale of the mind games that players are forced to endure has dramatically increased, Danganronpa Another Episode: Ultra Despair Girls still manages to capture the same feeling of entrapment and despair that is found in the visual novels that came before.

Set between the first two Danganronpa games, Another Episode puts players in the shoes of Komaru Naegi, the sister of protagonist Makoto Naegi from the original game. After being imprisoned in an apartment for over a year, Komaru is attacked by none other than a homicidal Monokuma. As she is chased by a pack of the robotic black-and-white bears, she is saved by a group of men calling themselves the Future Foundation, and is given a hacking gun that can affect a Monokuma’s wiring and programming, rendering them useless. After events lead to Komaru being separated from the Future Foundation, her journey to escape the riots of Towa City begins. But Komaru’s not alone on this journey, as she’s accompanied by returning character Toko Fukawa.

Toko serves as a foil for Komaru, as her status as the “Ultimate Writing Prodigy” is constantly referenced in comparison to her “normal” companion. The dynamic that Toko and Komaru have is pretty entertaining, as they’re constantly acting as a counterbalance to one another. Toko’s brash nature contrasts Komaru’s polite one, while surviving the events of the first game has made Toko a far more capable and driven character than she ever was prior. This means you’ll find that Toko often ends up playing the mentor role to Komaru in moments when the situation seems all too hopeless for her to handle. As a result, both characters show substantial growth as Another Episode goes on, as Komaru gains a confidence and strength she didn’t have, while Toko becomes more humble and less self-serving. Despite the hope that Komaru and Toko find together in Towa City, it isn’t without its moments of despair.

Monokuma still evokes a sense of dread, but in Another Episode he is a symbol of destruction and carnage, rather than the charismatic antagonist he used to be.

Even in a series as dark and twisted as Danganronpa, Another Episode manages to be the most disturbing story the series has yet to tell. Much of this comes from Spike Chunsoft’s decision to cast children as the villains in this desecrated world, and the ones responsible for the riots taking place on the streets of Towa City.

These five children, calling themselves the “Warriors of Hope,” command the legions of Monokuma scattered around Towa City, and the mask-sporting “Monokuma Kids” who use them to slaughter the adult population of the town. The Warriors of Hope began this massacre in order to create what they call “Paradise,” a place for children to live without fearing adult retaliation. Despite their violent nature, each of the Warriors of Hope come off believably like children. They’ll talk about childish things, often veer off-topic into tangents, and speak about their actions as if they’re playing a game.

Once members of Hope’s Peak’s Elementary school, the Warriors of Hope have banded together and are wreaking havoc on Towa City.

What caused these children to take such actions, and what their place is in Danganronpa’s overarching narrative serves as Another Episode’s mystery. However, it also results in some of the series’ most horrifying and unsettling themes that it has tackled yet. Another Episode continues the series’ focus on how the concepts of both hope and despair are often intertwined, and how one person’s hope can result in another’s despair. However, Another Episode’s focus on what despair means for a child is harrowing, and might prove too much for some people.

But even so, Another Episode’s story is unraveled just as expertly as its visual novel counterparts, and is just as profound in its pay off as it is captivating in the picture it paints of the Danganronpa world.

You’ll get a more in-depth look at the state of the world through collectible notes, journal entries, and articles left behind across Towa City. Collectibles add another layer of exposition to the Warriors of Hope, Towa City, and the events that led to this dystopian world. Some even act as their own side stories that you can follow throughout certain areas, giving a new meaning to the destruction you see as you make your way through the town. Even outside of the main narrative, there’s a ton of new information that will be especially intriguing to those who are invested in the story and key characters of Danganronpa.

However, getting to that exposition means going through squads of Monokumas. Initially, the black-and-white bears are usually seen in small groups, requiring a more careful approach. But as their designs and functions become more complex, you’ll have to be more strategic in how you can potentially take out multiple Monokumas through use of environmental traps, or even taking advantage of the bears themselves.

There are quite a few Monokuma classes you’ll have to deal with in Another Episode. Understanding their behavior and how they react to different Truth Bullets is key to making it through Towa City.

By using her hacking gun, Komaru is able to affect Monokumas and other technology in multiple ways by using different “Truth Bullets.” Some bullets are as simple as a single shot, while others immobilize the bears, control them, or activate certain machinery that you can use to defeat groups of Monokumas at once. The variety of Monokumas you’ll come across in Towa City, as well as the Truth Bullets you’ll have at your disposal make Another Episode a pretty deep shooter. Arbitrarily using offensive Truth Bullets is often wasteful, and neither health nor ammo is always that abundant. Using different bullets is the difference between being overrun by Monokumas and being able to turn an encounter around entirely. The Vita’s sticks lack the precision of a console controller, making aiming a little stiff early on, but upgrades you’ll come across later allow you to alter your sight movement to your liking.

Truth Bullets and Monokumas are also used as part of much of the game’s puzzle-solving sections as well. Throughout Another Episode, players will be brought into rooms with various Monokumas arranged in ways that will allow Komaru and Toko to take them out and avoid a fight entirely. Typically there are certain conditions to be met, such as destroying each Monokuma in one explosion, defeating every bear in the room without getting caught, or only using certain bullets. These puzzles start out relatively simple, but eventually will require you to use multiple bullets, and you only get one shot at pulling it off before you’re seen and have to fight all the Monokumas present. It’s just unfortunate that Another Episode often feels oversaturated with these rooms, meaning that some sections can feel repetitive, and not every room is challenging enough to stand out.

Monokumas aren’t slow, and seeing them running toward you can be incredibly unnerving. Komaru can’t take too many hits, which can give Another Episode a tense, almost horror-like vibe in some areas.

While Komaru handles Monokumas with her hacking gun, Toko can get into fights as well for a limited time. Having learned how to control her dissociative identity disorder, Toko is able to summon her alternate personality, serial killer Genocide Jack, in order to eliminate several Monokuma using her signature scissors. Genocide Jack essentially acts as a timed boost, granting the player invincibility, increased strength, and certain attacks capable of wiping out multiple enemies at once. Using Toko’s manic personality as a last resort gives players a safety net in close encounters, but she does sometimes come off like a crutch that can be used as a boost to get through challenging segments more quickly, which can sometimes make it feel easier to switch to her instead of learning how to shoot and manage your Truth Bullets.

But even with its shortcomings, Another Episode is an example of action and shooting pulled off on the Vita. Through depth in enemy and arsenal variety, Another Episode manages to keep players on their toes, while also creating a tense and claustrophobic atmosphere, all wrapped up in a personal story about the wavering feelings of hope and despair.

For too long the state of Danganronpa’s world was used as a threat or deterrence from leaving confinement and moving forward. Now that the curtain has been lifted and this despair-ridden world has been exposed, Another Episode has taken away a lot of the mystery that defined its predecessors. Just what this means for this ongoing battle between hope and despair is uncertain, but what is unquestionable now is that Danganronpa Another Episode: Ultra Despair Girls is a game that any Vita owner needs in their collection alongside the Danganronpa visual novels.

Another Episode may not be the game that some Danganronpa fans want, but it’s the game that the series needs. The spin-off shows that there is substance for this series outside the walls of Hope’s Peak while maintaining enough ties to its core story to feel essential. Danganronpa tackles shooting and action with the same confidence it does mystery and storytelling, and Another Episode stands proud next to the masterfully crafted visual novels from which it spawned.