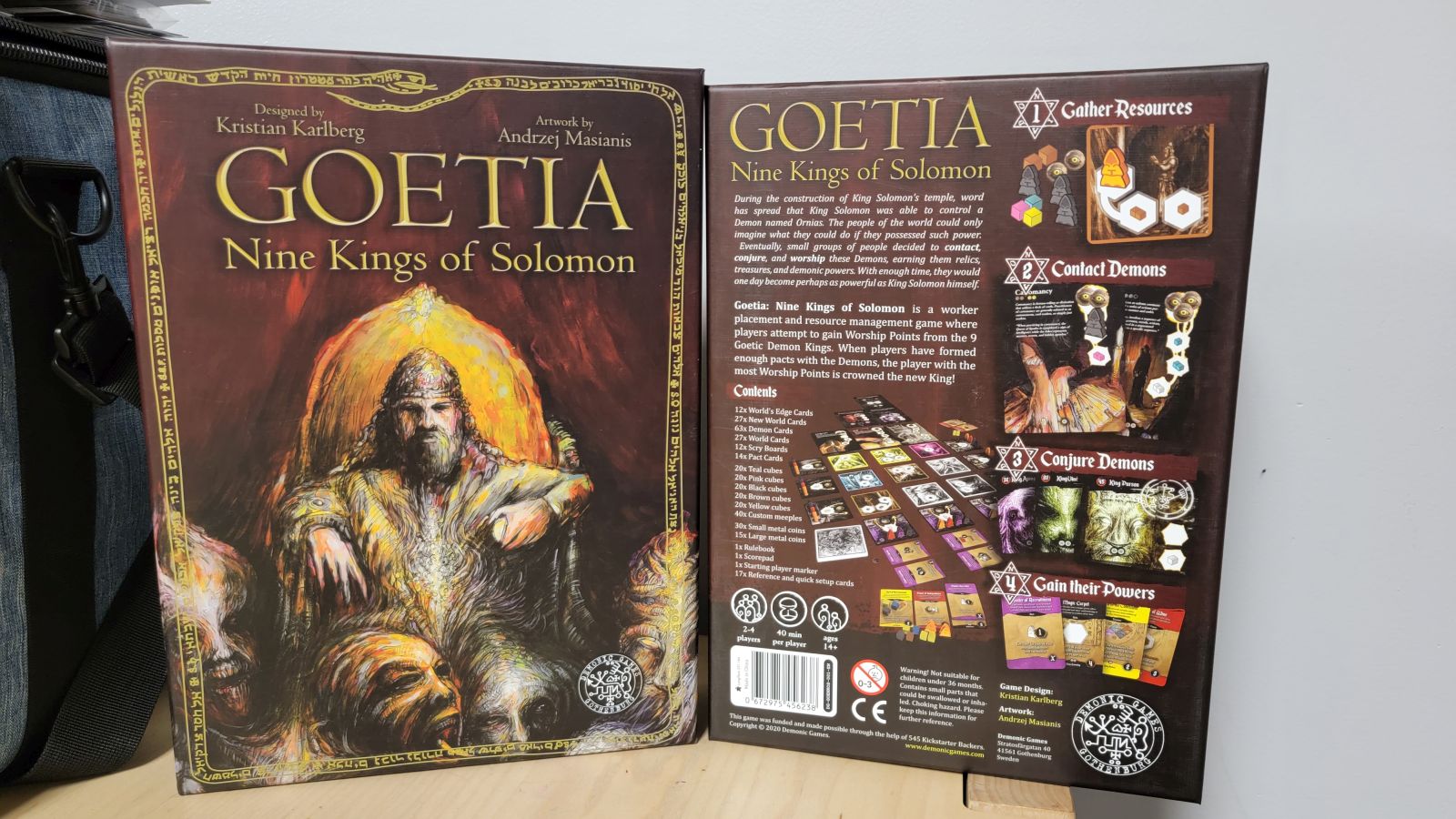 Every once in a while a game will come along that catches you by surprise. It happens when you least expect it and when you get to experience it for the first time it is jaw dropping, breathtaking, and all at once an amazing experience. Sometimes you can account for this if you go with a gut feeling that a game might be really good before it releases, but often a lot of different things happen and ultimately you get let down because most things do not live up to their reputation. This is where being caught unaware is the most beneficial as being caught unaware really opens your eyes to the possibility of the full potential of, in this instance, a game and how everyone should know more about, play, and discuss it. There should be more people already talking about it, but there are not, and it is a shame.

Enter the game Goetia: Nine Kings of Solomon. While I get excited for my fair share of games, Goetia simply did not bring me that excitement at first glance. In fact the only thing I was excited for was that the meeples from the game wore little robes and were insanely awesome. But here I judged a book by its cover before I even knew what was beneath. Here I would learn later that while owning a copy of the game simply because the meeples was okay and all, but the game itself had so much more to offer that I was completely unaware of. I am getting a little ahead of myself here because there is like I found out so much to share. 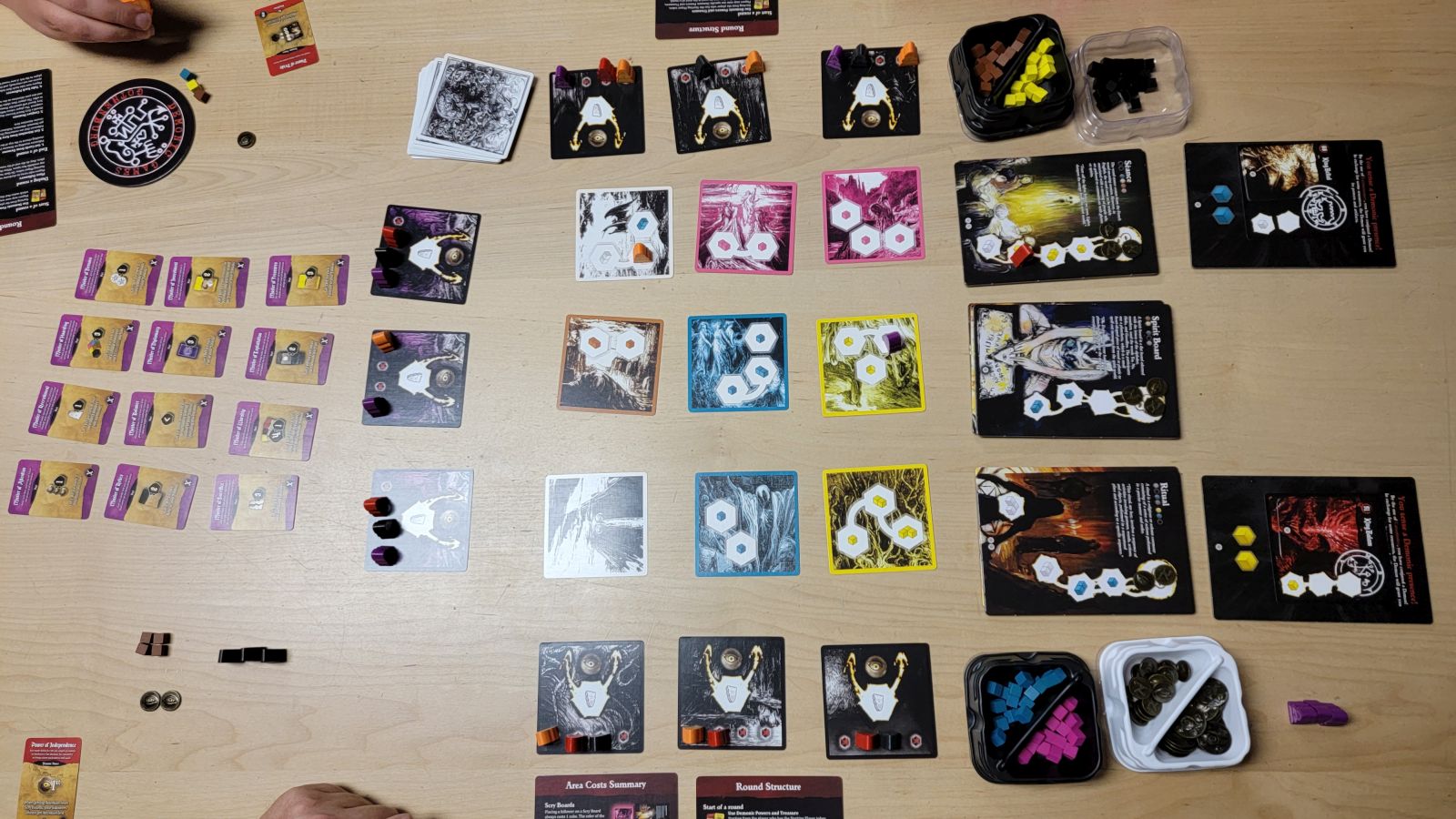 Goetia is a game for 2 to 4 players created, and published by Demonic Games in conjunction with Giga Mech Games. Playtimes for Goetia can be highly variable based on the action space cards that come out and the actions each individual player takes, and the demon cards that become available as well. Some games I have seen take 3 hours or so, others I have seen take only an hour and a half. This variability makes certain that replayability of Goetia is high. Replayability is a huge part of Goetia and with all of the constantly changing boards, games are and will consistently be different experiences.

Digging into Goetia, the game at its core is about garnering attention from demons, gaining resources, acquiring powers from demons, and scoring pact cards. To start, Goetia offers a plethora of components that set all players up for success. There are nine demons in total that provide the main make up of the world board. Here the nine demons each have more than a few of their own individual world cards to make the world board vastly different each time you play, as previously stated. After going through setup on one of the three setup cards or following it in the rulebook, there will be nine unique demon world cards that make up the world board which is where the majority of the action spaces are for the game. Once you do that, each demon based on the amount of players gets cards drawn from their individual decks and placed to the side for later in the game. A deck of world cards is then created and set to the side for later use. 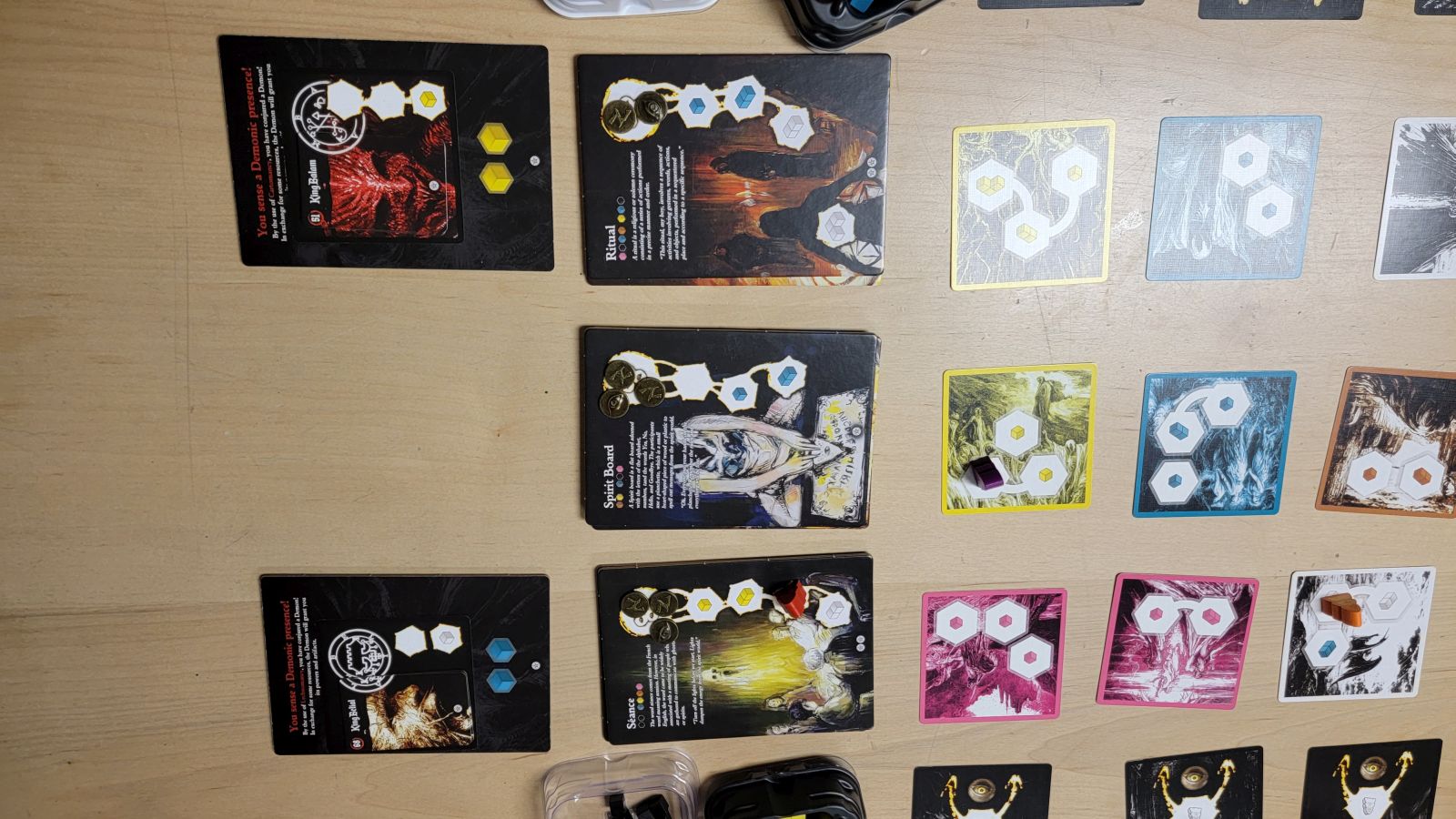 Finally, the game begins and players go in turn placing one follower until all players are out of followers for the round. Once players play a follower on an action space the rewards resource cubes they collect those cubes immediately. After all players have placed their followers on action spaces from either world’s edge, world cards, or scry boards, end of round steps then take place. During the end of a round players first gain attention if they have played any followers on scry boards. Then players gain cards from demons, followed by conjuring demons, and lastly players retrieve followers, if able, from actions spaces. Followers unable to be retrieved stay in their places until unlocked in a future round.

How does a follower become locked in a space? Well that is pretty simple, all action spaces follow one of two designs. Either the action space is isolated and a solo hex space that has no connection to other spaces, or an action space is a hex that has connecting spaces to other hexes. Here, if a follower is placed in a solo space they will return to the player at the end of a round. If a follower is placed in a connected space, then all connected spaces have to be full of followers regardless of which player they belong to. Then and only then are players allowed to retrieve those followers from connected spaces. The one caveat to this is that when a world card or a scry board are flipped per the mechanism within the game, any followers on those would return to the player regardless of if the connected slots were all full or not. 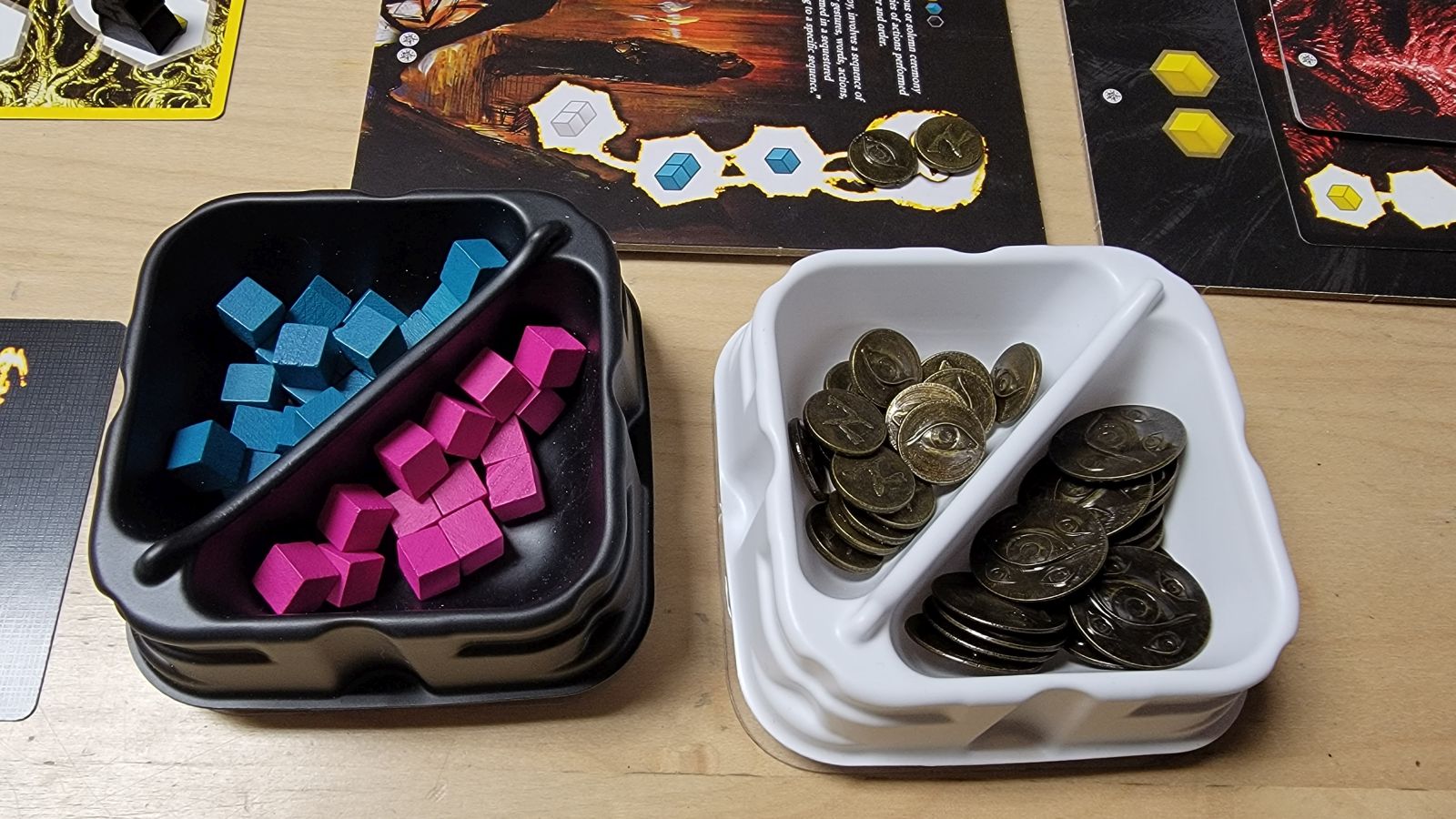 Worshiping the conjured demon now allows players to gain relics, treasures, and demonic powers from said demons. These cards from the demons now provide a bevy of bonuses for players from victory points, to extra resources, to extra action spaces, and even abilities that affect how the rest of the game is played for those players who have them. Once players have exhausted all the cards a demon has to offer, the demon now leaves the darkness board and endgame strength actions are now available for all players. Here players can gain extra cubes, gain pact cards, and trade extra cubes for more attention among many other offerings.

The world cards that became demons force the world board to shift in order to fill that space with new world cards from the world card deck. This variable world board keeps things shifting as the remaining followers that were placed on world’s edge cards have variable costs to unlock them. At the start of the game, unlocking a new follower might cost all the colored cubes on the action spaces in any given column or row. This can change based on followers placed on world cars which would then lower the cost of a follower. These costs also extend to the specific world’s edge cards that are adjacent to the previously mentioned pact cards. The world’s edge cards here once cleared of all players’ followers will flip and like all other cards that flip, offer new action spaces. These new action spaces, specifically the aforementioned ones that are adjacent to the pact cards now offer actions to gain pact cards from those specific rows, albeit at a steep cost. 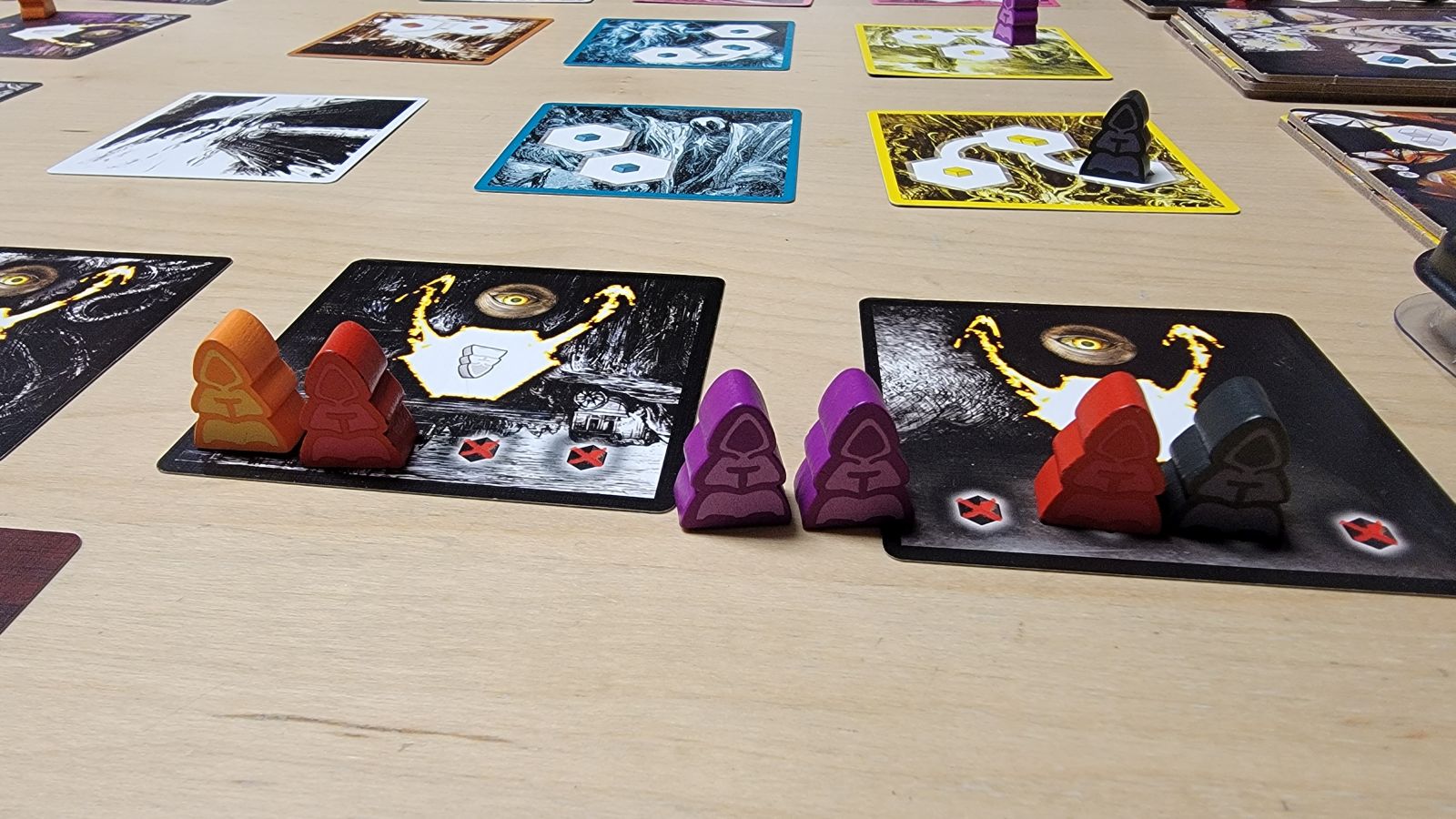 Much of the game continues in this manner of placing followers and reaping benefits all to gain WP(Worship Points). A game of Goetia continues until either all but an amount of pact cards equal to players remains(or less), or when a single player has four active pact cards. Active pact cards meaning of the four cards across that players can have in their individual tableaus the four pact cards would have to be the top most cards. Here in a players tableau they may stack cards across the four allowed in a row, however the only active cards belong to the top of the stack and any below lose all abilities.

Goetia initially caught my attention because of the components. Strangely, components can often influence whether one buys a game or not, but typically if a company pays attention to the kinds of components their customers want, then typically players are more likely to talk to their friends about the quality of components, and so on and so forth. For myself, the follower meeples, the attention tokens, the quality of the cards and boards consistently felt like a lot of care and consideration was put into the production and over design of Goetia. While the initial component quality was what drew me in, the excellent game beneath the excellently designed game components just continues to shine.

Having finished a plethora of playthroughs of Goetia, this has without a doubt been one of my more favorite games in recent history, and the fact that more people are not talking about it blows my mind. Action selection is easy, game design is clean, components are of high quality, and ultimately replayability makes every game unique. I personally look forward to keeping this game on the table. Even others that I have shared this with have been blown away by the unexpected hit that Goetia is.

After many plays, and much time spent with such an excellent game, any avid board game can easily reward themselves by playing or acquiring their own copy of Goetia: Nine Kings of Solomon. While the theme may keep some away, it would be a downright shame if anyone lets that stand in their way of an ultimately amazing game.