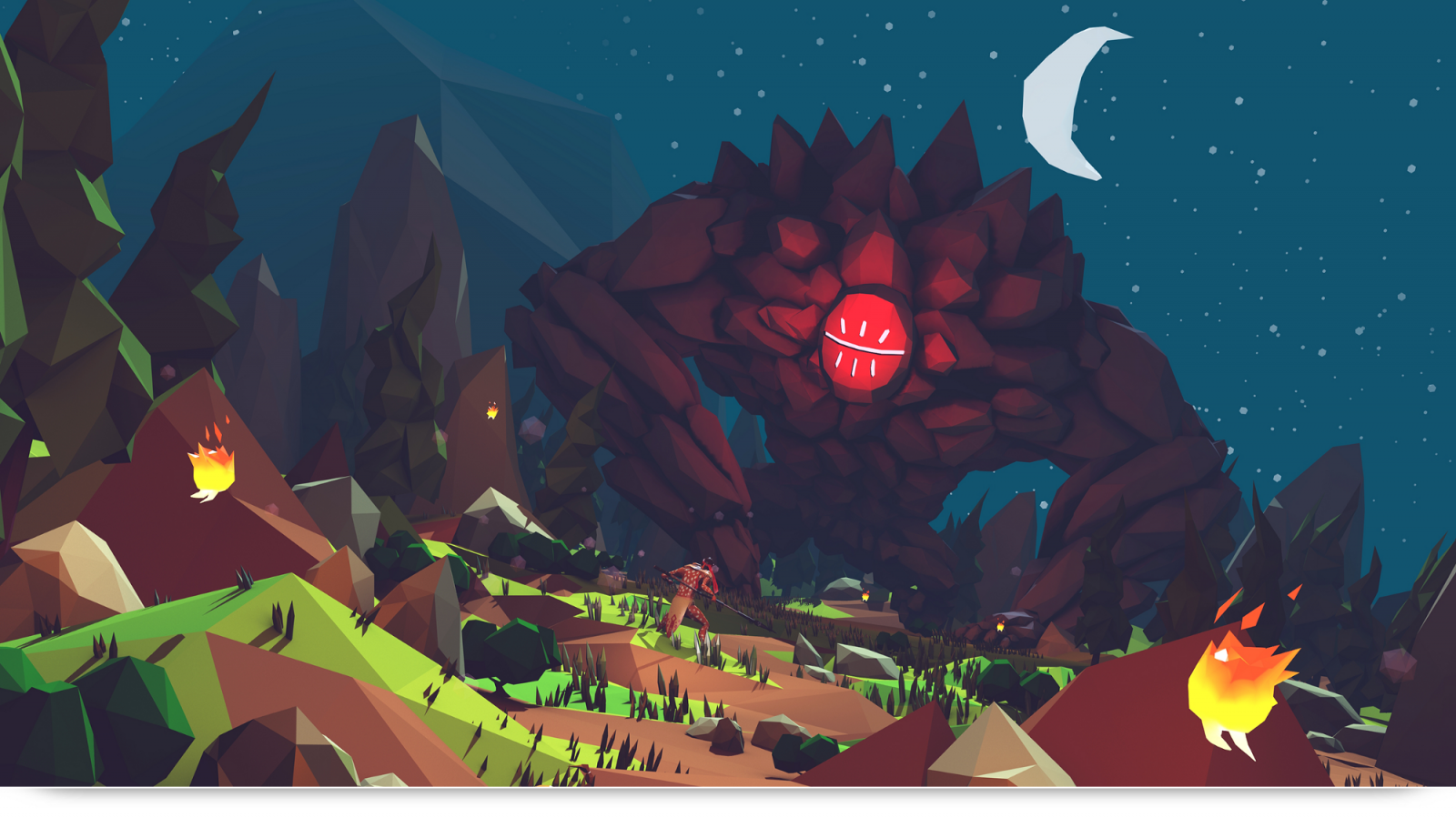 Video games offer the unique ability to explore cultures and mythologies in a more abstract and often profound way. They can serve to paint a complete interactive picture of a place through the eyes of their creator. Mulaka attempts to use the medium to shine a light on the native culture of the Tarahumara tribe that still live in Chihuahua alongside the developers today. Much of the presentation, from the crisp–almost painterly–low-poly presentation to the understated but well-tuned music, paint a beautiful picture of a slice of the world that is nearly lost to time. The problem is that, as a game, Mulaka lacks any of the cohesiveness the developers at Lienzo clearly put into the aesthetic.

You control Mulaka, a legendary member of the Tarahumara tribe, who is attempting to prevent a godly calamity by defeating large beasts to prove yourself to various mythical beings. Mulaka has light and heavy attacks, a spear that you can throw and you steadily earn the ability to transform into different animals like a bird, bear, or snake that allow for different ways to explore and fight. Those abilities change the level design from expansive flatland to towering canyons or rushing rivers. This is all used to fight all sorts of different creatures and huge bosses that use all the different game mechanics in varied and interesting ways. It’s just too bad that the use of those mechanics feels so underdeveloped.

The combat is easily the most prominent feature of the game and also the most disappointing. It was overly fiddly most of the time, where it often felt like even when my character model was making contact with the enemy my attacks wouldn’t land because the game had not properly locked on. It leads to combat where you can quickly attack and dodge roll, but you still need to clumsily position yourself directly in front of enemies so that you can get off a decent combo attack (attacks that never feel fleshed out in any interesting way). Mulaka can perform standard strings of light or heavy attacks, but there is no good way to string anything together, so it feels like you’re just spamming simple combos over and over. In one particularly egregious example of the combat’s failings, I was fighting a huge boss that required me to climb up a cliff face and fly onto the boss’s back to destroy its weak points. Every time he moved at all when I was up there Mulaka would get sent flying into the air or would slide off the side for no reason other than the two character models seemingly could not handle being in contact with each other.

Aside from the loose nature of the combat, the platforming you’ll be forced to do in Mulaka also feels like it was designed by people without ever talking to whomever was in charge of the actual mechanics. Once you earn the ability to transform into a bird it serves effectively as your double-jump. When you jump a second time, you take off in whichever direction you were facing. But because the game gives the bird a little bit of extra height when he transforms there are tons of jumps that look like you simply shouldn’t be able to make it until you turn into a bird and goofily slide to the top. You then turn around and repeat. It seems strange that they would rely on this transformation for narrow jumps for no good reason. It simply feels like the two elements of the game were not developed in concert, which leads to confusing and incongruous game design.

You also have access to an upgrade tree where you can spend “Korima” that you earn from killing enemies or destroying objects in the environment. That upgrade tree is hugely underwhelming as it only has a total of seven items on it that change the game very little. I would have been fine with so few upgrades if they were substantial, but you slowly build your Korima so that you can have slightly higher defense or a slightly faster cooldown on your spear-throw. You only have access to this tree from a specific woman in one of the early levels of the game, so even if you want to engage with that you have to go to a different level for no meaningful reward.

It is, in theory, nice that you can freely return to any previous level. As Mulaka gains new exploration abilities you can go back and find secrets that were previously inaccessible. In practice though, these secrets are often just small stashes of upgrade currency, so there’s almost no reason to actually go back and find those secrets. It is refreshing, at least, that those levels don’t have to exclusively contain combat and exploration but can include the odd town or small group to talk to and learn a bit more about the world. The dialogue is not always well-written (and the text poorly wraps around the text boxes in a way that goes from strange to annoying over the course of the game) but it serves its purpose well enough to help sell the overall world of Mulaka alongside the visuals.

I really wanted to like Mulaka. It has a lot going for it: from the sharp and vivid aesthetic to one of the more interesting settings in a game in a while, but the trappings as a video game show that the developers maybe spent more time researching the fascinating subject matter rather than how to actually make an enjoyable experience.

The team at Lienzo has built a beautiful and fascinating glimpse into an overlooked and forgotten culture that is immediately endearing. The game they built to support that, though, is disappointingly shallow and clumsily constructed. It’s nice to see game development coming out of Mexico, and I look forward to what they are able to do next, but Mulaka doesn’t have the chops to make the game worthwhile.

Nathan lives in Colorado catching Pokemon on the Go and at home. He previously spent three months interning for Game Informer before coming back to Gaming Trend to spread the good word on video games. His real passion, though, is collecting different versions of the 3DS and other weird Nintendo garbage. It's a never-ending quest for less space in his house.
Related Articles: Indies, Mulaka
Share
Tweet
Share
Submit