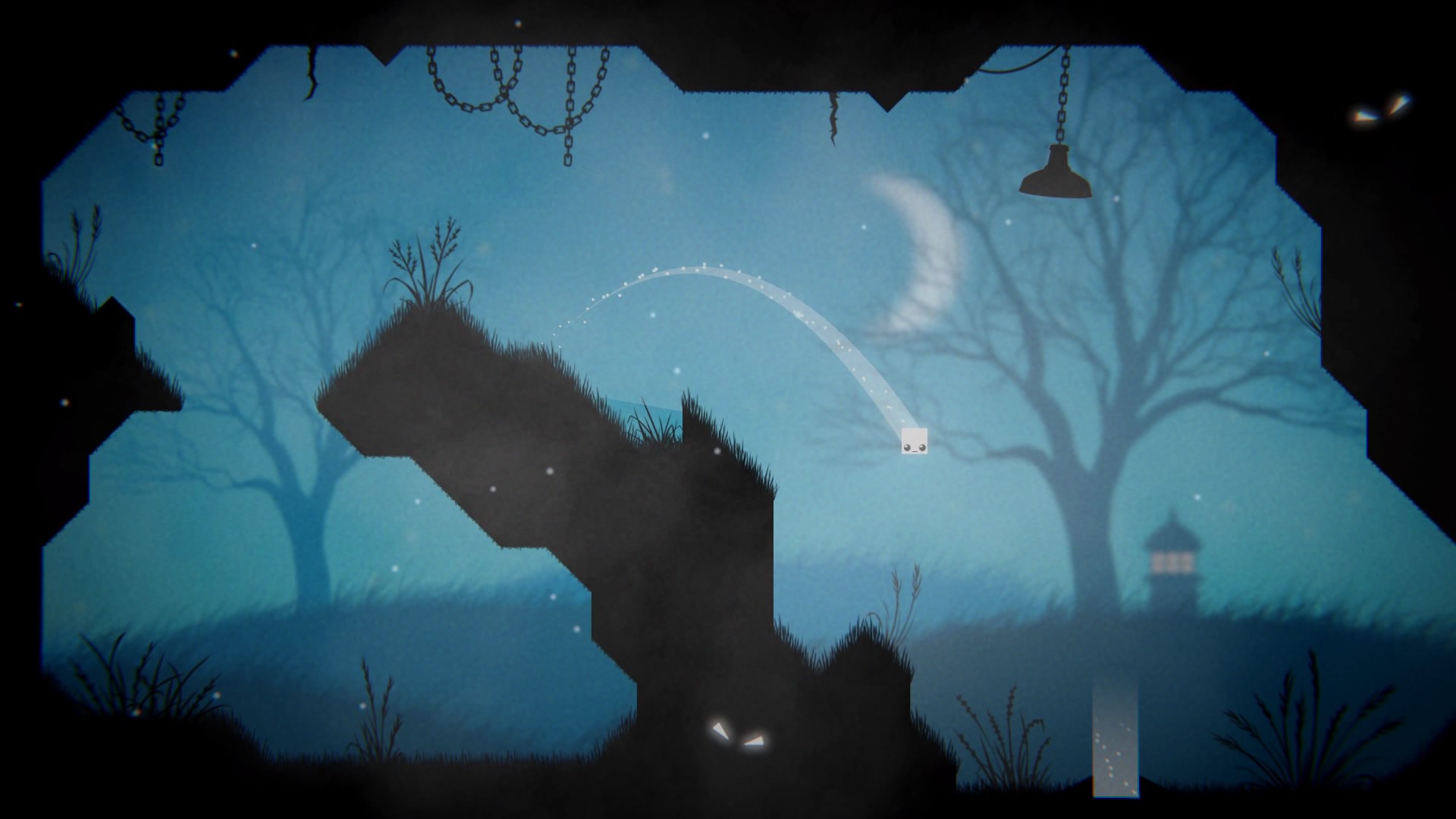 Get ready to join our little fairy friend Midnight on his journey through a creepy forest. Set in a dark forest littered with obstacles and traps, you must help Midnight make it to a highlighted goal by jumping, dodging, and golfing.

Midnight Deluxe plays like a combination of golf and platforming, which is an interesting concept. In terms of golfing, you are deciding how hard to launch Midnight and what angle to launch him at. By holding down X, you are setting up for the shot. From there, you move a triangular shape to pick the strength and angle; the longer the triangle, the harder he’ll launch. This is a fun concept as it challenges the player to think about how much power works best and where they should aim to avoid obstacles. It takes some trial and error, especially later in the game, but it makes beating a level all the more rewarding.

The world is composed of darkness which borders the level and takes the shape of traps, along with the hazy blue sky in the background, and the fields in the distance. There isn’t a lot of color variety, but that is part of the atmosphere. The color scheme and the calming music create a feeling of being in a serene, yet almost empty forest. It makes it easy to sit back and calmly play the game.

The level design is one of the best aspects of the game; the goal is the same in each level, but the strategies to beat them may vary. Midnight Deluxe isn’t a hard game, but it steadily ramps up the difficulty as you progress. There are no extreme difficulty curves like in some other puzzle games, which was refreshing. For example, in early levels, there are no obstacles and you just need to make it to the goal, while later on, you must avoid traps such as saw blades, lasers, and spikes. As with many platforming games, falling in holes is a concern, but launching off of the level is an added problem. Go too far and you’ll fly off screen and have to restart; the same thing goes for going too far up. This is a nice touch as it prevents players from just firing Midnight as hard as they can to try and win. Planning and precision become more important, which is appreciated.

This precision is important if you want to complete the levels in as few moves as possible. When a level is completed, you are awarded between one and three stars based on the number of shots you took. This screen shows the number of moves required to get a specified number of stars. The lower the number of moves you had to use, the better you did. This aspect goes back to the golf concept of the gameplay. The inclusion of level select allows the player to go back and retry levels in order to get more stars and prove how well they can perform. You don’t earn anything special from the stars, as they are purely for your satisfaction (and in the case of the PlayStation 4 version, a trophy). Even so, level select provides a way to increase replayability.

Midnight Deluxe boasts a total of 70 levels, which is more than I expected. There’s more than enough variety in the level design to keep from getting bored, so don’t worry. Now, just because there are 70 levels doesn’t mean the game is going to take a long time to beat. In fact, depending on your skill and luck, you could potentially beat the game in one or two hours. Personally, it took me around 1 1/2 hours to complete all of the levels. I had a few moments where I hadn’t realized how many levels I had beaten until a trophy popped. Those were awakenings that made me aware I had gone through another 20 levels without realizing it. Being able to play a game without focusing on how far you’ve gotten until it’s brought to your attention made the experience better.

Midnight Deluxe is a cute little platformer that relies on golf-like controls to reach your goal. It isn't the hardest game, but it offers a nice challenge for a casual gaming session. It may not take much of your time, but for $4.99, I'd say Midnight Deluxe is worth a buy.

Codi loves to play video games and watch movies. He will watch almost any kind of movie just to experience them. His ideas take inspiration from the shows and movies he watches, and games he plays. He also loves a good pun.
Related Articles: Midnight Deluxe
Share
Tweet
Share
Submit